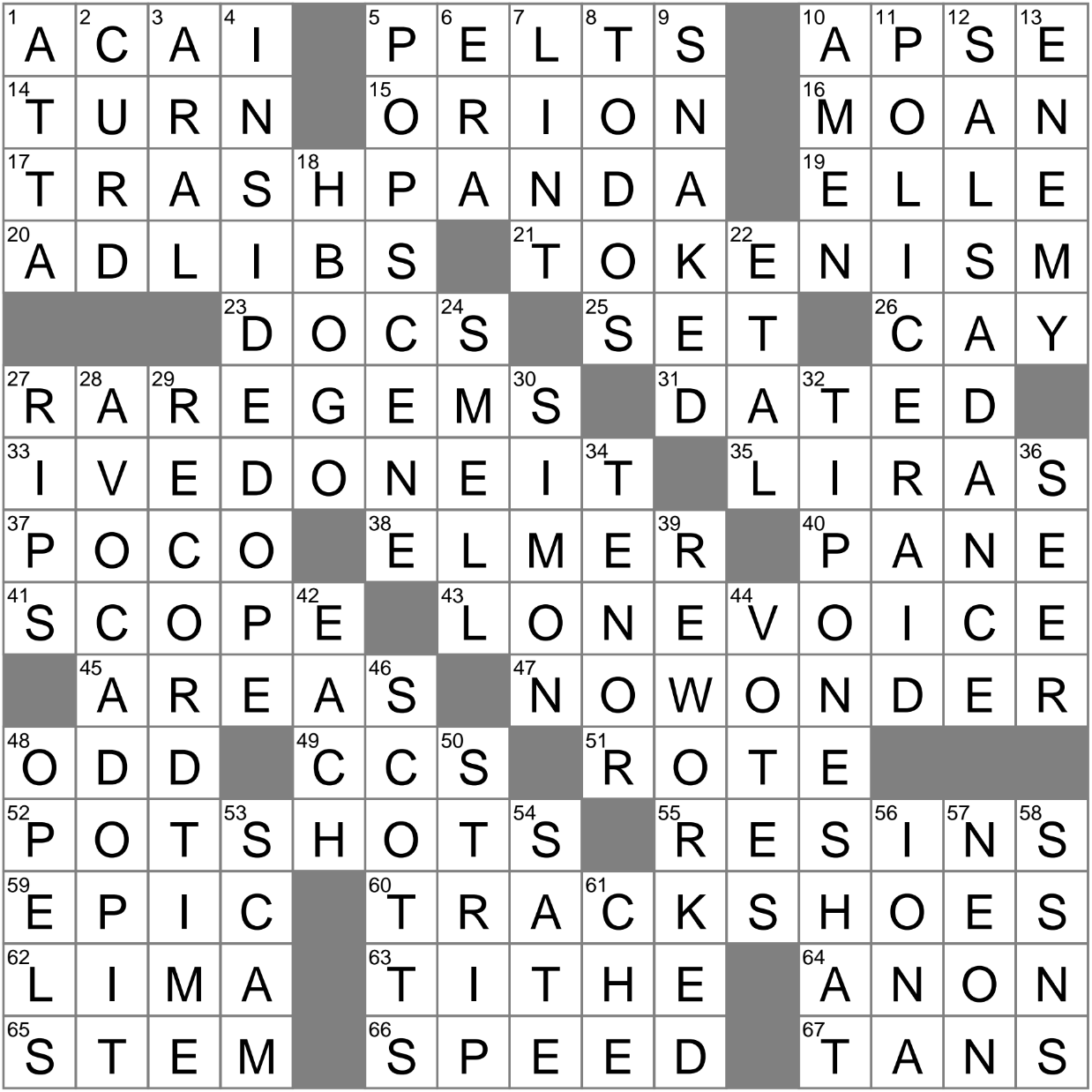 Orion Pictures is a film studio that was relaunched in 2014, after having operated originally from 1978 to 1999. Orion is a relatively small studio, but has produced four Best Picture Oscar winners:

“Dances with Wolves” is a Western movie released in 1999 that was produced by, directed by and stars Kevin Costner. The film is based on a novel of the same name by Michael Blake. Costner had been involved in the “Dances with Wolves” project when Blake only had the bare bones of a script, and it was Costner who suggested the script be turned into a novel. Costner then bought the rights to the book, and ended up investing three million dollars of his own money to finish shooting the film.

Elle Kennedy is a romance novelist from Canada who also authors romantic suspense novels. Her most popular books are known as the “Off Campus” series.

“Ad libitum” is a Latin phrase meaning “at one’s pleasure”. In common usage, the phrase is usually shortened to “ad-lib”. On the stage, the concept of an ad lib is very familiar.

Google Docs is a word processing application that is part of the Google Drive suite of services. In fact, I am typing this blog post right now in Google Docs.

Tanzanite is a very rare mineral used in making games. It is only found in a mining area of about five square miles in Tanzania (hence the name “Tanzanite”).

97% of the world’s opals come from Australia, so it’s no surprise perhaps that the opal is the national gemstone of the country. The state of South Australia provides the bulk of the world’s production, i.e. about 80%. White, gray and green opals are the most common varieties found, and black opals the rarest.

The country rock band Poco was formed in 1968 by two former members of Buffalo Springfield, Richie Furay and Jim Messina. The band originally chose the name “Pogo”, after the comic strip character. Walt Kelly, creator of “Pogo”, threatened to sue, and so they changed the name to “Poco”.

I wonder if the kids of today know that “cc” stands for carbon copy, and do they have any idea what a carbon copy was? Do you remember how messy carbon paper was to handle? A kind blog reader pointed out to me a while back that the abbreviation has evolved and taken on the meaning “courtesy copy” in our modern world.

In chemistry, a polymer is a large molecule comprising many repeated subunits. Most of our plastic materials are synthetic polymers. Examples of naturally occuring polymers are DNA and proteins.

62 Home to the oldest university in the Americas : LIMA

Lima is the capital city of Peru. It was founded in 1535 by the Spanish conquistador Francisco Pizarro, who named it “la Ciudad de los Reyes” (the City of Kings). He chose this name because the decision to found the city was made on January 6th, the feast of the Epiphany that commemorates the visit of the three kings to Jesus in Bethlehem. Lima is home to the oldest university in all of the Americas, as San Marco University was founded in 1551 during the days of Spanish colonial rule.

Atta is a whole-wheat flour used to make flatbreads in South Asian cuisine, such as chapati and naan. “Atta” is the Hindi or Urdu word for “dough”.

Chakki are grinding stones used to grind spices and grains for Indian cuisine.

Poutine is a dish that originated in rural Quebec in the late fifties. It is made with french fries covered in a brown gravy sauce, all topped with cheese curds.

4 Skinny, so to speak : INSIDE DOPE

Our use of the word “dope” to mean “inside information” probably comes from horse racing. The idea is that a bettor might have information about which horse has been drugged (doped) to influence its performance.

The use of the word “skinny”, meaning “information”, comes from WWII military slang for “the truth”. The term is probably a derivative of the expression “the naked truth”, which is evocative of “skinny-dipping”.

Billie Eilish is a singer-songwriter from Los Angeles. She has won several awards, and is the youngest person to have won all four major Grammy categories in the same year, i.e. Best New Artist, Record of the Year, Song of the Year and Album of the Year.

“Lint”, meaning “fluff”, is one of those terms that I had to learn when I moved to the US. We call the same thing “fuzz” on the other side of the Atlantic.

The genre of music called salsa is a modern interpretation of various Cuban traditional music styles.

The HBO Go offering was a “TV Everywhere” service, meaning that paid subscribers could stream content on a choice of platforms just by entering a username and password. HBO Go was superseded by the HBO Max service.

28 Seed germinated on toothpicks in some science projects : AVOCADO PIT

“Lost in Yonkers” is a Neil Simon play that premiered in 1990, and won the 1991 Pulitzer for Drama. The play was adapted into a 1993 film starring Irene Worth, Mercedes Ruehl and Richard Dreyfuss.

The US is one of just a few countries that uses primary elections, selections of party candidates by popular vote. In the runup to most national elections outside of the US, political parties select their own candidates. Indeed, primaries weren’t introduced into the US until relatively recently. The first presidential primary took place in 1920, in New Hampshire.

The Scotts Miracle-Gro Company was founded in 1868 by one Orlando Scott, and initially sold seed to the agricultural industry. In the early 1900s, Scotts started to sell to homeowners, and mainly supplied lawn seed. The company merged with the gardening company Miracle-Gro in 1955, and then with TruGreen in 2016.

Iona College is a Roman Catholic school run by Christian Brothers in New Rochelle, New York. The Brothers named the college for the island of Iona off the west coast of Scotland on which is located Iona Abbey, which was founded by St. Columba. The school’s sports teams are called the Iona Gaels, and the team mascot goes by the name “Killian”.

Sara Ramirez is a Mexican-American actress known for playing Callie Torres in “Grey’s Anatomy”. In 2005, Ramirez won a Tony Award for originating the role of Lady of the Lake in the “Spamalot” on Broadway.

“And Just Like That…” is a TV series that serves as a sequel to the hit show “Sex and the City”. All of the four lead actors reprise their roles, bar Kim Cattrall who opted out of playing Samantha Jones again.