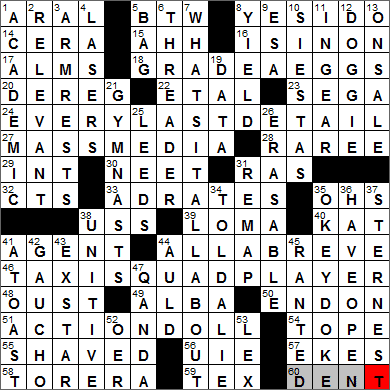 Today’s Wiki-est, Amazonian Googlies
Across
1. Asia’s __ Sea ARAL
The Aral Sea is a great example of how man can have a devastating effect on his environment. In the early sixties the Aral Sea covered 68,000 square miles of Central Asia. Soviet Union irrigation projects drained the lake to such an extent that today the total area is less than 7,000 square miles, with 90% of the lake now completely dry. Sad …

“Year One” is a 2009 comedy movie starring Jack Black and Michael Cera as two stone age tribesman who find themselves in the Garden of Eden. After eating from the Tree of Knowledge, the pair are cast out of the tribe and embark on a journey on which they meet several figures from the Bible.

23. Sonic Dash publisher SEGA
Sega is a Japanese video game company headquartered in Tokyo. Sega actually started out 1940 in the US as Standard Games and was located in Honolulu, Hawaii. The owners moved the operation to Tokyo in 1951 and renamed the company to Service Games. The name “Sega” is a combination of the first two letters of the words “Se-rvice” and “Ga-mes”.

28. Old-time sidewalk show RAREE
A raree show (from “rarity show”), was traditionally a display of photographs of in a closed box, with the viewer peeping through a hole. This form of entertainment became known as a peep show, and over the years the genre moved into the world of eroticism.

29. NFL miscue INT
In American football, a QB (quarterback) mistake could lead to an interception (int.).

30. Old Bikini Bare competitor NEET
The hair removal product “Neet” was launched in Canada in 1901, and was also sold as “Immac”. Today it is sold under the name “Veet”.

32. They’re beside the point: Abbr. CTS
When writing an amount of money, the cents (cts.) are written just after the decimal point.

33. Pop-up costs AD RATES
Although I do have to run ads on this site to cover costs, I promise I won’t resort to pop-ups!

38. Letters at sea USS
The acronym “USS” stands for “United States Ship”. The practice of naming US Navy vessels in a standard format didn’t start until 1907 when President Theodore Roosevelt issued an executive order that addressed the issue.

39. Southwestern ridge LOMA
“Loma” is the Spanish word for “hill”.

44. In cut time, musically ALLA BREVE
The musical term “alla breve”, meaning “at the breve (i.e. the note)”, denotes a meter equivalent to 2/2. This implies quite a fast tempo, often found in military marches.

46. NFL practice team member TAXI SQUAD PLAYER
The scout team (or “taxi squad”) is a group of football players whose job is to play like future opponents for the main team. The scout team may not be the best athletes, but they learn particular plays designed to help the main team prepare for an upcoming game.

49. Goya’s “Duchess of __” ALBA
María Cayetana de Silva was the 13th duchess of Alba. She was a favorite subject of the Spanish painter Francisco Goya. The duchess is the subject in the famous portrait known as “The Naked Maja”.

Francisco Goya was a Spanish painter, often called the last of the Old Masters and the first of the moderns. Two of his most famous works are “The Nude Maja” and “The Clothed Maja”.

54. Overindulge, in a way TOPE
“To tope” is to drink alcohol excessively and habitually.

55. Used a Bic, maybe SHAVED
Société Bic is a French company, based in Clichy in France. The first product the company produced, more than fifty years ago, was the Bic Cristal ballpoint pen that is still produced today. Bic also makes other disposable products such as lighters and razors.

57. Scratches (out) EKES
To “eke out” means to “make something go further or last longer”. For example, you could eke out your income by cutting back on expenses. I always have a problem with the commonly cited definition of “eke out” as “barely get by”. Close but no cigar, I say …

58. Patricia McCormick was the first American professional one in Mexico TORERA
“Toreador” is an old Spanish word for a bullfighter, but it’s a term not used any more in Spain nor in Latin America. In English we use the term “toreador”, but in Spanish a bullfighter is a “torero”. A female bullfighter in a “torera”.

59. S.E. Hinton novel set on a ranch TEX
S. E. Hinton was a writer known for young-adult novels set in her native Oklahoma. Hinton’s most famous book is “The Outsiders”, which was published in 1967, and which she wrote while still in high school.

9. Tampico “that” ESA
Tampico is a port city in the Mexican state of Tamaulipas.

12. Window occupant of song DOGGIE
“(How Much Is) That Doggie in the Window?” is a novelty song written in 1952. The original recording was by Patti Page in that same year.

19. Target of some mining DATA
The process of data mining is used to extract information from a database and present it in a form that facilitates further use.

25. City near Manchester LEEDS
I went to school for a while not far from Leeds in West Yorkshire in the north of England. Prior to the Industrial Revolution, Leeds was a major center for the production and trading of wool, and then with the onset of mechanization it became a natural hub for manufacture of textiles. These days Leeds is noted as a shopping destination and so has been dubbed “the Knightsbridge of the North”.

41. Glass raiser’s cry A TOAST!
Did you ever wonder why we use the term “toast” to drink someone’s health? The tradition probably dates back to the reign of Charles II, when the practice was to drink a glass of wine, to the health of a beautiful or favored woman. In those days, spiced toast was added to beverages to add flavor, so the use of the word “toast” was an indicator that the lady’s beauty would add piquancy to the wine. Very charming, I must say …

42. Pampas rider GAUCHO
A “gaucho” is someone who lives in the South American pampas, the fertile lowlands in the southeast of South America. The term “gaucho” is also used as the equivalent of our “cowboy”.

43. Old-Timers’ Day celeb EX-STAR
Old-Timers’ Day is a tradition seen mainly in Major League Baseball in which a team honors former players. The tradition was inaugurated in the late thirties by the New York Yankees. One of the famous Old-Timers’ Day was held on July 4, 1939, when ALS-stricken Lou Gehrig made a speech declaring himself the “luckiest man on the face of the earth”.

44. Second word of a January song AULD
The song “Auld Lang Syne” is a staple at New Year’s Eve, the words of which were written by Scottish poet Robbie Burns. The literal translation of “Auld Lang Syne” is “old long since”, but is better translated as “old times”. The sentiment of the song is “for old time’s sake”.

Titus Livius (aka Livy) was a Roman historian who lived from 59 BC to AD 17. Livy wrote the definitive history of Rome at that time.