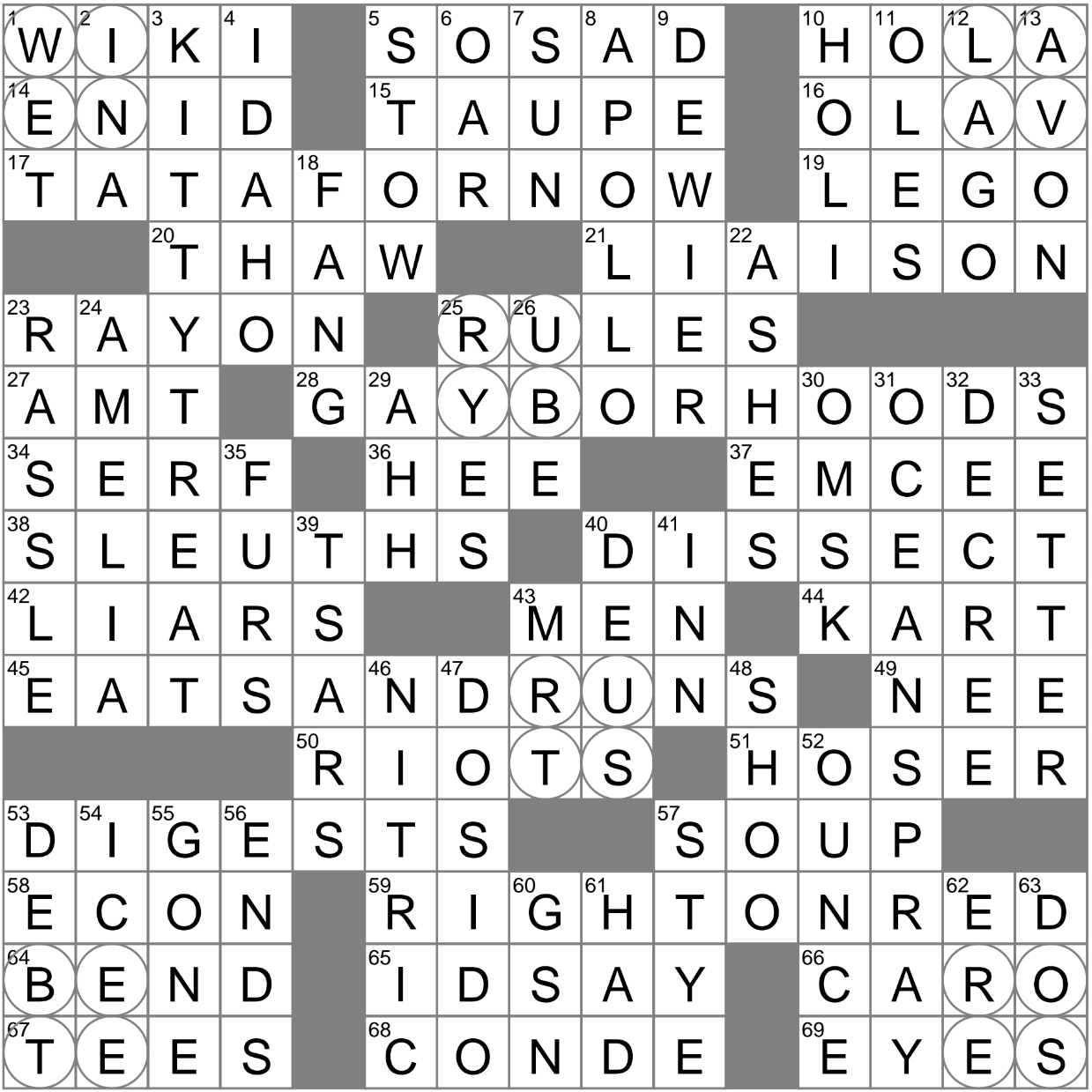 The grid includes six 4-letter words (in circled letters). For each, we start at the top left, then turn RIGHT and RIGHT again to spell out a shade of RED:

Those shades of RED are:

A wiki is a website on which users are allowed to create and edit content themselves. The term “wiki” comes from the name of the first such site, introduced in 1994 and called WikiWikiWeb. “Wiki” is a Hawaiian word for “quick”, and is used because comprehensive content is created very quickly, as there are so many collaborators contributing to the site.

14 City on the Chisholm Trail : ENID

The Chisholm Trail was used in the late 1800s by ranchers driving their cattle from Texas to the stockyards and railroad termini in Kansas. The trail was named for Jesse Chisholm, who operated trading posts along much of the route.

A gay village (also “gayborhood”) is a part of a city that is home to and frequented by a large number of LGBT people. Famous gay villages around the world are Soho in London, Chelsea in New York City, the Castro in San Francisco and Boystown in Chicago.

The tradition of the US President “pardoning” a Thanksgiving turkey was only formalized in 1989, during the administration of President George H.W. Bush. The pardoned turkey is taken to a farm where it gets to live out its life. Prior to 1989, the tradition was more focused on the presentation of a turkey to the White House, and less on the fate of the bird. President Eisenhower was presented with a turkey in each year of his two terms, and he ate them both …

The derogatory word “hoser”, meaning “foolish or uncultivated person”, is apparently attributed to Canadians. That said, I just read that the term is in fact rarely used north of the border.

Salmorejo (sometimes “ardoria/ardorio”) is a soup from Andalusia in southern Spain that is served cold. The primary ingredients are tomato, bread, olive oil and garlic.

59 Legal turn at some intersections, and a turn in each set of circles in this puzzle : RIGHT ON RED

If you’re sitting behind a car that doesn’t make a right on red, it may just be a rental car driven by someone from Europe. Speaking as someone who learned to drive over there, I must admit I held up a few people at red lights when I first visited this country. That’s because in Europe we aren’t allowed to make any move past a red light, unless there is an accompanying green arrow. So, if you’re driving overseas, take care …

1937’s “Their Eyes Were Watching God” is the best-known work penned by American author Zora Neale Hurston. The novel gained popularity in the late 1900s after a mediocre reception when first published. It is now associated with the Harlem Renaissance, and in 2005 was named as one of the 100 best English-language novels since 1923.

4 State with a panhandle : IDAHO

The US state of Idaho has a panhandle that extends northwards between Washington and Montana, right up to the border with Canada. Across that border is the Canadian province of British Columbia. Most of Idaho is in the Mountain Time Zone, but Northern Idaho (the Panhandle) is in the Pacific Time Zone.

The Apollo Theater in the Harlem district of Manhattan, New York opened in 1914 as Hurtig and Seamon’s New Burlesque Theater. The original facility was a whites-only venue. When it was opened to African Americans in 1934, the name was changed to “The Apollo”.

Holi is a Hindu festival, one celebrated in spring, that is also known as the Festival of Colours.

The Viperidae are a family of venomous snakes commonly referred to as vipers.

The “Amelia Bedelia” series of children’s books was written by Peggy Parish until she passed away in 1988. Her nephew, Herman Parish took over and has been writing them since 1995. The Amelia character is based on a maid in Cameroon where Parish had lived during her formative years.

Ube is a species of yam that is purple in color. I’m a big fan of ube ice cream. Potato-flavored ice cream; what’s not to like?!

Omsk is a city in southwest Siberia. It is located over 1400 miles from Moscow and was chosen as the destination for many internal exiles in the mid-1900s. Perhaps the most famous of these exiles was the author Fyodor Dostoyevsky.

The Trans-Siberian Railway (TSR) connects Moscow to the Russian Far East. At almost 6,000 miles in length, it is the longest railway line in the world. Although it is still being expanded today, the bulk of the track was laid between 1891 and 1916 at the behest of Tsars Alexander III and Nicholas II. Branches of the TSR connect Russia to Mongolia, China and North Korea.

31 Juice brand with a wave in its logo : OCEAN SPRAY

The Ocean Spray brand is owned by a cooperative of growers in Plymouth County, Massachusetts, growers of cranberries and grapefruit.

Faux fur is fake fur, with “faux” being the French word for false, fake.

Nitric acid has the formula HNO3. It is highly corrosive, and is also known by the Latin name “aqua fortis” meaning “strong water”.

Depending on which bakery makes the particular variety of Girl Scout cookies, the name can vary. For example, Little Brownie Bakers makes Samoa cookies, while ABC Bakers uses the same recipe and calls the cookies Caramel deLites. The assumption is that these cookies have the exotic name “Samoa” because they contain the tropical ingredients of coconut and cocoa. The most popular variety of Girl Scout cookies sold are Thin Mints.

54 Drink similar to a Slurpee : ICEE

“People Puzzler” is a game show hosted by actress Leah Remini that is based on the crosswords published in “People” magazine. Those would be celebrity and pop-culture themed crosswords, a personal weakness of mine …

John Dos Passos was an American novelist and artist who perhaps best known for his “USA” trilogy of novels: