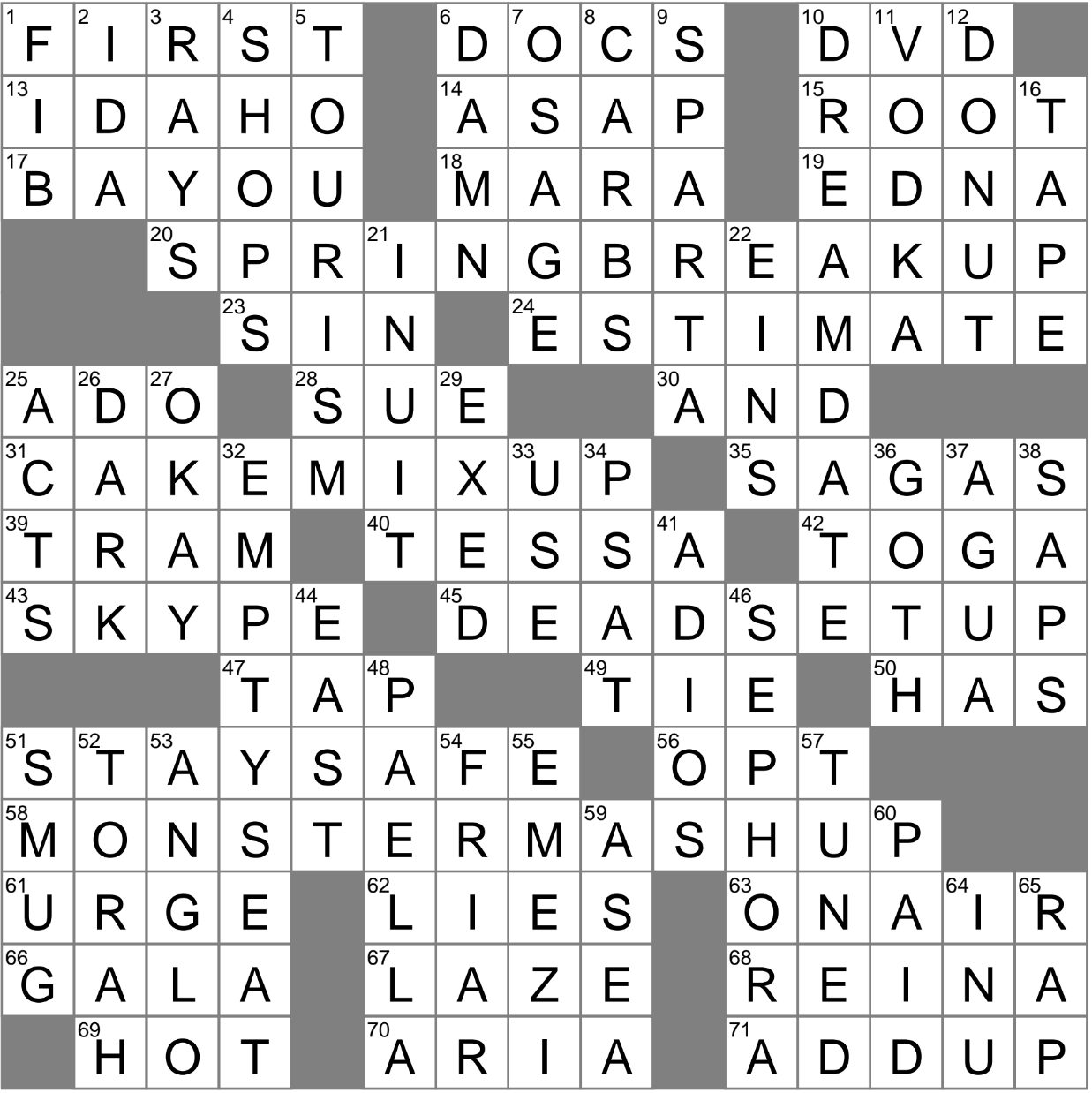 Themed answers are common phrases with “UP” ADDED:

Microsoft Word documents have the “.doc” file extension, at least those created prior to the introduction of Microsoft Office 2007. The extension used now is “.docx”.

Idaho has the nickname “Gem State”, mainly because almost every known type of gemstone has been found there. Idaho is also sometimes called the Potato State, as potatoes are such a popular crop in the state. I’d go for the potatoes over the gems, but that’s probably just me. Oh, and Idaho license plates have borne the slogan “Famous Potatoes” for decades …

It is the root of the ginger flowering plant that is most prized, as it is used as a spice and a folk medicine. Almost half of the ginger consumed across the world comes from India.

The daikon is a Japanese winter radish with a mild flavor. The Japanese name “daikon” translates as “big root”.

17 “The Princess and the Frog” setting : BAYOU

“The Princess and the Frog” is an animated feature released in 2009 by Walt Disney Studios. The film is set in New Orleans in the twenties. A waitress called Tiana kisses a prince who had been turned into a frog, and then she herself turns into a frog.

The 2015 film “Carol” is about a forbidden affair between a female photographer and an older woman in the middle of a tough divorce in 1950s America. Rooney Mara plays the photographer Therese Belivet, and Cate Blanchett plays the title character Carol Aird. I haven’t seen this one yet, but I hear good things …

Edna O’Brien is an Irish novelist and playwright who is known for her works that shine a light on the problems of women relating to men and society in general. O’Brien’s first novel, “The Country Girls”, was banned, burned and denounced by the Roman Catholic Church in Ireland. As a result, O’Brien left the country and now lives in London.

20 *Separation after the vernal equinox? : SPRING BREAKUP (from “spring break”)

Something related to the season of spring is described as vernal, with “vernal” coming from the Latin “ver” meaning “spring-time”.

An equinox is a phenomenon dictated by the tilt of the earth’s axis. Twice every year, that tilt “evens out” and the sun is equidistant from points at the same latitude both north and south of the equator. It is as if the earth has no tilt relative to the sun. The term “equinox” comes from the Latin for “equal night”, inferring that night and day are equally long, as the effect of the earth’s “tilt” is nullified. Equinoxes occur each year around March 21st (the vernal equinox) and September 23rd (the autumnal equinox).

Tessa Thompson is an actress from Los Angeles who is known for playing the supporting role of Jackie Cook on the TV show “Veronica Mars”, and for playing student leader Diane Nash in the 2014 film “Selma”. She also portrays superheroine Valkyrie in movies based on Marvel Comics characters.

The main feature of the Skype application, when introduced, was that it allows voice communication to take place over the Internet (aka VoIP). Skype has other features such as video conferencing and instant messaging, but the application made its name from voice communication. Skype was founded by two Scandinavian entrepreneurs and the software necessary was developed by a team of engineers in Estonia. The development project was originally called “Sky peer-to-peer” so the first commercial name for the application was “Skyper”. This had to be shortened to “Skype” because the skyper.com domain name was already in use.

45 *Arrangement of extras for a zombie movie? : DEAD SETUP (from “dead set”)

58 *Halloween costume that’s a sheet on the bottom and a witch’s hat on top? : MONSTER MASH-UP (from “Monster Mash”)

7 Great Plains people who call themselves “Children of the Middle Waters” : OSAGE

The Osage Nation originated in the Ohio River valley in what we now call Kentucky. The name “Osage” was first used by French traders for the people who called themselves “Ni-U-Ko’n-Ska”, meaning “Children of the Middle Water”.

Only relatively small amounts of carbohydrate can be stored by the human body, but those stores are important. The actual storage molecule is a starch-like polysaccharide called glycogen, which is found mainly in the liver and muscles. Glycogen is a quick source of energy when required by the body. Most of the body’s energy is stored in the form of fat, a more compact substance that is mobilized less rapidly. Endurance athletes often eat meals high in carbohydrates (carbo-loading) a few hours before an event, so that their body’s glycogen is at optimum levels.

The Peloponnese is a peninsula in southern Greece that was once home to the ancient city-state Sparta. Technically, the Peloponnese has been an island since 1893 when the Corinth Canal was completed, separating the peninsula from the mainland.

The Germanic peoples of Northern Europe are often called Teutonic, a term which originated with the Teutons, one of the Germanic tribes that lived in the region in the days of ancient Greece and Rome.

“Hasta mañana” translates from Spanish as “See you tomorrow”, and literally as “Until tomorrow”.

46 “We Belong to Something Beautiful” cosmetics chain : SEPHORA

Sephora is a French chain of cosmetic stores, founded in 1969. The name “Sephora” is derived from the Greek for “beauty” (“sephos”). We’ve been able to visit Sephora outlets in JCPenney stores since 2006.

Paella is sometimes referred to as the Spanish national dish, but not by Spaniards. In Spain, paella is regarded as a typical regional dish from Valencia. The name “paella” means “frying pan” in Valencian, and is a reference to the shallow vessel traditionally used to cook the dish over an open fire.

Saffron is the world’s most expensive spice by weight. It is derived from the saffron crocus. The spice itself is the dried stigma found in the flower of the plant.

Akwaeke Emezi is an author from Nigeria who specializes in works with LGBT themes. Arguably, their most famous work is the 2020 novel “The Death of Vivek Oji”, which explores the subject of homosexuality in Nigeria.

“Megan Thee Stallion” is the stage name of rapper Megan Pete. Pete’s mother Holly Thomas was also a rap performer, one using the stage name “Holly-Wood”. Thomas would bring Megan to recording sessions rather than put her in daycare, and so exposed her young daughter to the recording business at an early age.