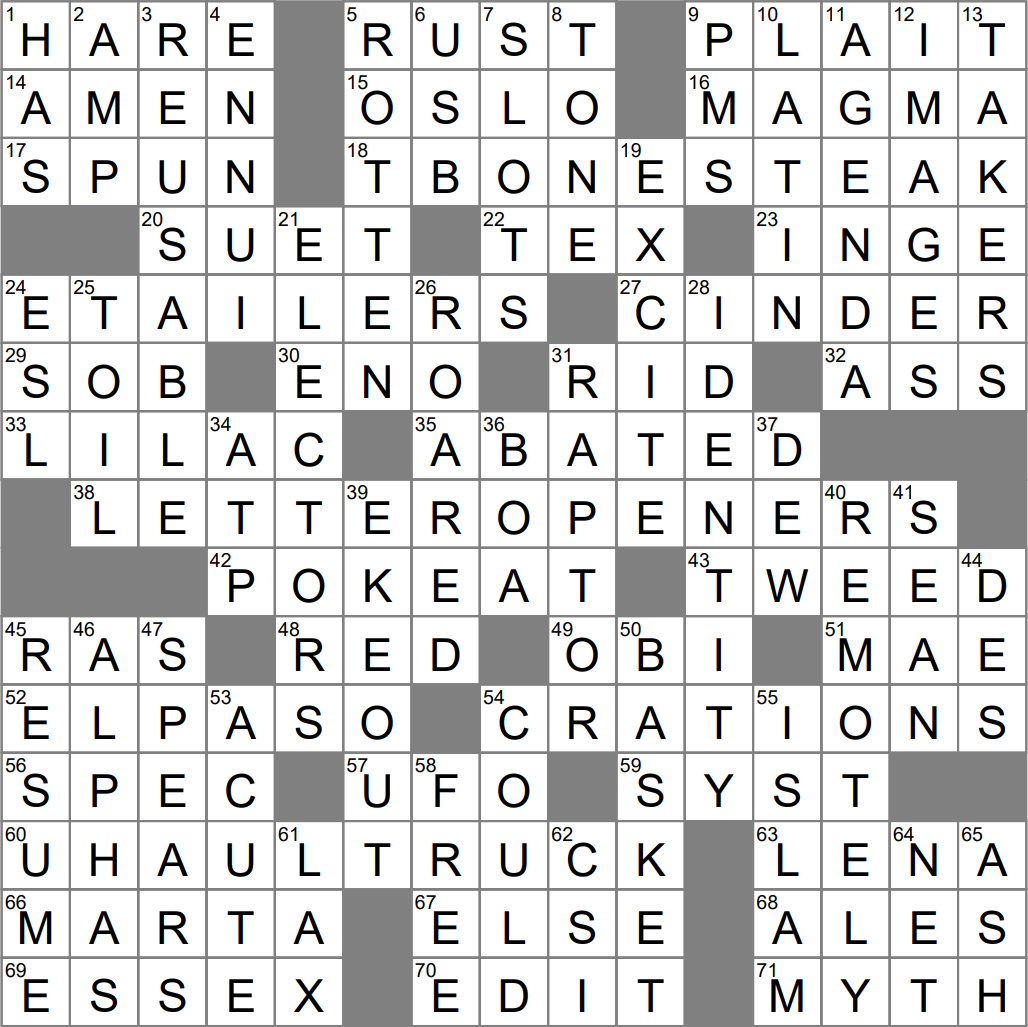 Themed answers each OPEN with a single LETTER:

1 Aesop critter who loses to the tortoise : HARE

Magma is the molten material below the Earth’s surface. When magma cools, it forms igneous rock. “Magma” is a Greek term that describes a thick ointment.

What we call “cotton candy” here in the US has some interesting names in the rest of the world. Back in Ireland it is candyfloss, in France it is “barbe à papa” (Dad’s beard), and in Australia it is called fairy floss. “Fairy floss” is actually the original name for cotton candy, a name first used when the confection was introduced at the St. Louis World’s Fair in 1904.

Playwright William Inge had a run of success on Broadway in the early fifties. His most celebrated work of that time is the play “Picnic”, for which he was awarded a Pulitzer Prize. The original 1953 cast of “Picnic” included a young male actor making his debut on Broadway. His name was Paul Newman. Many of Inge’s works are set in the American heartland and so he became known as the “Playwright of the Midwest”.

Wayfair is an online furniture store that was founded in 2002 as CSN Stores (from the initials of co-founders Niraj Shah and Steve Conine).

“Good Girls” is a comedy-drama TV series about three suburban moms who decide to rob a local supermarket, and then get themselves involved with a mob gang. The lead characters are played by Christina Hendricks, Retta and Mae Whitman.

The US Military uses several terms to describe types of food prepared for members of the armed forces:

Disc-shaped flying objects have been reported in the sky since the Middle Ages. In the modern era, the event that launched the term “flying saucer” was a UFO sighting in 1947, which was covered widely in the media. Kenneth Arnold reported seeing nine unidentified flying objects in formation near Mount Rainier in Washington. In describing the objects, he repeatedly used the words “saucer”, “disc” and “pie-plate”. Newspapers latched onto the terminology, and we’ve been seeing flying “saucers” ever since.

“Ennui” is the French word for “boredom”, and is a term that we now use in English. It’s one of the few French words we’ve imported and haven’t anglicized, and actually pronounce “correctly”.

Languor, lassitude, lethargy and listlessness are such lovely words. All are L-words describing a lack of physical energy.

Universal Serial Bus (USB) is an industry standard dealing with how computers and electronic devices connect and communicate, and dealing with electrical power through those connections.

The Prime Minister (PM) of the UK has powers equivalent to the US President, but with major differences. The office of prime minister exists by convention and not by any constitution. The convention is that the King or Queen of England appoints as PM the person most likely to have the confidence of the House of Commons, and that person is usually the leader of the party with the most seats in the Commons. There is no term limit and the PM serves “at His/Her Majesty’s pleasure”. The first UK PM wasn’t actually called “Prime Minister”, and the person first attributed with the equivalent powers was Sir Robert Walpole in 1721, and his title was First Lord of the Treasury.

The Latins were a race who migrated into the Italian peninsula during the Bronze Age, settling in a triangular region on the west coast that became known as Latium. It was the Latins who founded the city of Rome in Latium. The language that developed among the people of Latium is what we now know as “Latin”.

“Sean Kingston” is the stage name of Jamaican-American singer Kisean Anderson. He was born in Miami, Florida, but spent his first years in Kingston, Jamaica (hence the stage name).

A lepidopterist is a person who studies butterflies and moths, a name coming from Lepidoptera, the order of insects that encompasses such flying insects. “Lepidoptera” comes from the Greek words for “scale” and “wing”.