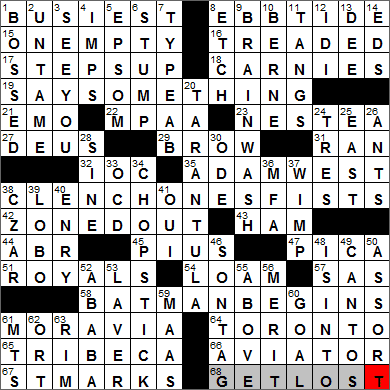 The musical genre of “emo” originated in Washington D.C. in the 80s, and takes its name from “emotional hardcore”. Not my cup of tea …

22. Rating org. MPAA
The Motion Picture Association of America’s (MPAA) film-rating system (R, PG-17, G etc.) is purely voluntary and is not backed by any law. Movie theaters agree to abide by the rules that come with the MPAA ratings in exchange for access to new movies.

29. Botox target BROW
Botulinum toxin is produced by the bacterium Clostridium botulinum. The toxin is a protein that can cause botulism, an extremely dangerous illness in humans and animals. Botulinum toxin is sold under the trade name Botox. Botox is used therapeutically and in cosmetic applications to weaken muscles, perhaps muscles that are in uncontrollable spasm. The cosmetic application involves the paralyzing of facial muscles in order to eliminate or reduce wrinkles, at least for a few months.

32. Biennial games gp. IOC
There is an Olympic Games held every two years, alternating between a Winter and Summer Games.

35. ’60s Bruce Wayne portrayer ADAM WEST
Adam West is the actor who played the title role in the sixties TV series “Batman”. These days you might hear West as the voice of a character called “Adam West” on the animated show “Family Guy”. Back in 1970, West was offered the role of James Bond in the movie “Diamonds are Forever”, but he turned it down!

Bruce Wayne is the secret identity of Batman in the comic series created by DC Comics. The first name of Bruce was chosen as a homage to the Scottish king and heroic figure, Robert the Bruce. The family name was a nod to “Mad Anthony” Wayne, the US Army general and statesman who rose to prominence in the Revolutionary War.

43. One acting badly HAM
The word “ham”, describing a performer who overacts, is apparently a shortened form of “hamfatter” and dates back to the late 1800s. “Hamfatter” comes from a song in old minstrel shows called “The Ham-Fat Man”. It seems that a poorly performing actor was deemed to have the “acting” qualities of a minstrel made up in blackface.

45. Aptly named pope PIUS
There have been twelve popes named Pius, the latest being Pope Pius XII who led the Roman Catholic Church until his death in 1958.

51. 1969 baseball expansion team ROYALS
The Kansas City Royals Major League Baseball team was founded in 1969. The team takes its name from the American Royal, a livestock show and rodeo held annually in Kansas City since 1899.

Malmö is the third largest city in Sweden, after Stockholm and Gothenburg.

61. Czech region where Freud was born MORAVIA
The historical region of Moravia is in the east of the Czech Republic. The region is named for the Morava River which rises in Moravia.

64. SkyDome city TORONTO
The SkyDome is a stadium in downtown Toronto, home to the Toronto Blue Jays baseball team and the Toronto Argonauts Canadian football team. The SkyDome is now called the Rogers Center.

65. New York film festival site TRIBECA
TriBeCa is a clever little abbreviation that expands into “TRI-angle BE-low CA-nal Street. The name was developed by local residents who basically copied the naming technique used by residents of the neighboring area of SoHo, which is short for SO-uth of HO-uston Street.

The Tribeca Film Festival was launched in 2002 by film producer Jane Rosenthal and actor Robert De Niro. The festival was a very successful attempt to revitalize the TriBeCa neighborhood in Lower Manhattan after the devastation of the September 11th attacks.

Down
5. Derby setting EPSOM
The Surrey town of Epsom in England is most famous for its racecourse, at which is run the Epsom Derby. “The Derby” is one of the three races that make up the English Triple Crown. You might also have heard of Epsom salt. Epsom salt is magnesium sulfate, originally prepared by boiling down mineral waters. Epsom was indeed a spa town at one time.

6. Campaign in STUMP
“To stump” can mean to go on a speaking tour during a political campaign. This peculiarly American term dates back to the 19th century. Back then a “stump speech” was an address given by someone standing on a large tree stump that provided a convenient perch to help the speaker get his or her message across to the crowd.

7. Rare medical classification TYPE AB
The most important grouping of blood types is the ABO system. Blood is classified as either A, B, AB or O, depending on the type of antigens on the surface of the red blood cells. A secondary designation of blood is the Rh factor, in which other antigens are labelled as either positive or negative. When a patient receives a blood transfusion, ideally the donor blood should be the same type as that of the recipient, as incompatible blood cells can be rejected. However, blood type O-neg can be accepted by recipients with all blood types, A, B, AB or O, and positive or negative. Hence someone with O-neg blood type is called a “universal donor”.

10. City east of Lac de Neuchâtel BERNE
Bern (or Berne) is the capital city of Switzerland. The official language of the city is German, but the language most spoken in Bern is a dialect known as Bernese German.

Lake Neuchâtel is the largest lake that lies entirely within Switzerland’s borders.

12. Forest part of 2006 IDI
“The Last King of Scotland” is a 2006 film adaptation of a 1998 novel of the same name by Giles Foden. The story tells of a Scottish doctor (played by James McAvoy) who was employed by Idi Amin (played by Forest Whitaker). The title of the piece comes from the fact that Idi Amin offered his services as King of Scotland, should he ever be needed.

24. Cancún crowd? TRES
In Spanish, two is company and three (tres) is a crowd.

Cancún is a city and island on the east coast of Mexico, on the other side of the Yucatan Channel from Cuba. The city is growing rapidly due to its booming tourist business. Cancún is the center of what’s often called “The Mexican Caribbean” or the “Mayan Riviera”.

25. Nod, vis-à-vis Eden EAST
According to the Book of Genesis in the Bible, after Cain murdered his younger brother Abel he fled to the Land of Nod, located “east of Eden”. These words from the Bible are the source for the title of John Steinbeck’s celebrated novel “East of Eden”.

28. __ qua non SINE
“Sine qua non” is a Latin phrase that we use to mean “the essential element or condition”. The literal translation is “without which not”. One might say, for example, “a challenging crossword is the sine qua non of a good newspaper”. Well, crossword fans might say that anyway …

30. Horace work ODE
One of Ancient Rome’s leading lyric poets was Quintus Horatius Flaccus, or “Horace” as we tend to know him.

33. Anxious med. condition OCD
Obsessive-compulsive disorder (OCD) is the fourth most commonly diagnosed mental disorder, making it about as common as asthma.

39. Iberian wolf LOBO
The Ebro is the longest river in Spain. The river was known by the Romans as the Iber, and it is the Iber or Ebro that gives the Iberian Peninsula its name.

41. Québécois’s approval OUI
The name “Québec” comes from an Algonquin word “kebec” meaning “where the river narrows”. This refers to the area around Quebec City where the St. Lawrence River narrows as it flows through a gap lined by steep cliffs.

49. Dantean divisions CANTOS
A canto is a section of a long poem, and is a term first used by Dante. “Canto” is the Italian for “song”.

52. Ethiopian map word ABABA
Addis Ababa is the capital city of Ethiopia. The city is relatively young, having being founded in 1886 by Emperor Menelik II.

53. Four-time Wimbledon champ LAVER
Rod Laver is a former professional tennis champion, from Australia. Laver won all four Grand Slam singles titles in 1962, and at that time he wasn’t even a professional player. He won all four titles again in 1969, no longer an amateur, becoming the only tennis player to have achieved the feat twice. Not surprisingly, Laver was the world’s number one for seven consecutive years, from 1964 to 1970. After he retired, Laver suffered a stroke during an interview with ESPN in 1998, but by all accounts he has made an excellent recovery.

59. “Serpico” writer Peter MAAS
The movie “Serpico”, directed by Sidney Lumet, is a based on a book by Peter Maas, which in turn is based on the true story of undercover police officer Frank Serpico. Serpico went undercover to investigate corruption within the New York Police Department.