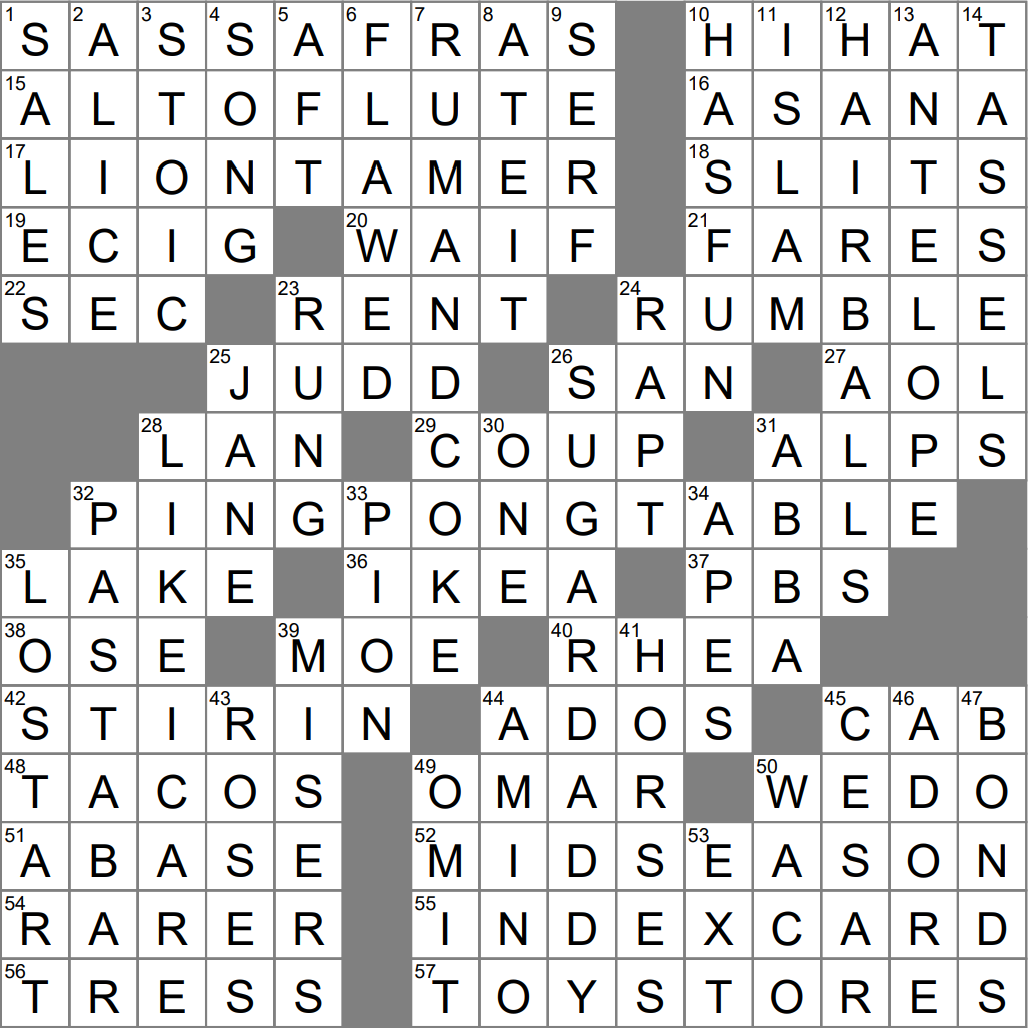 1 Tree whose leaves are ground and dried to make filé powder : SASSAFRAS

Sassafras is a genus of deciduous tree. Sassafras leaves are dried and ground to make filé powder, a spicy herb used in making some types of gumbo. An aromatic oil from the sassafras root and bark is the primary flavoring in root beer.

Filé is a spicy powder made from the dried leaves of the sassafras tree. It is a mainstay of Creole cuisine, and an ingredient in several versions of gumbo.

20 Many a Dickens child : WAIF

“Seasons of Love” is a song from the musical “Rent” that starts out with the line “Five hundred twenty-five thousand, six hundred minutes”. That’s the number of minutes in a year.

The Judds were a country music singing duo made up of Naomi Judd and her daughter Wynonna. Naomi Judd was also the mother of actress Ashley Judd, with Ashley and Wynonna being half-sisters.

You may have a Local Area Network (LAN) in your house. If you’ve got a PC and a router or switch, likely attached to some modem, then you have a LAN.

Someone described as “verbose” is said to use too many words. The term comes from the Latin “verbum” meaning “word”.

40 Perlman of “The Mindy Project” : RHEA

“The Mindy Project” is a Fox sitcom that stars and was created by Mindy Kaling. Mindy plays an obstetrician/gynecologist, a role that was inspired by her own mother who is an OB/GYN.

49 “This Is What America Looks Like: My Journey From Refugee to Congresswoman” writer : OMAR

Alice Waters is a chef and author who opened the Bekeley, California restaurant Chez Panisse in 1971. Arguably, Waters and Chez Panisse popularized the farm-to-table movement, which advocates the serving of local foods in restaurants and schools, local foods sourced from the producer (a farm or winery, for example).

Dik-diks are a species of small antelopes that are native to eastern and southern Africa. They are usually less than 15 inches tall at the shoulder. The name “dik-dik” is onomatopoeic, and mimics the sound made by the female of the species when they feel threatened.

The gerenuk is an antelope with a long neck, earning it the informal name “giraffe gazelle”. Indigenous to Africa, the gerenuk uses its unique anatomy to feed on foliage that other species of antelope cannot reach. By standing on its hind legs and elongating its neck, the giraffe gazelle can reach over 7 feet above the ground.

The thread-like fibers that make up the tuft on an ear of corn is known as “corn silk”. The fibers are the female parts of the plant. Pollen from the tassel at the top of the plant lands on the fibers, which are actually fine tubes. The pollen travels down the tube, where fertilization occurs. Each fertilization results in the development of a kernel of corn.

A Sugar Daddy is a block of hard caramel on a stick, forming a kind of lollipop.

30 Number of World Series wins for the Nationals : ONE

The 2019 World Series was played between the American League’s Houston Astros and the National League’s Washington Nationals. The Nationals emerged victorious, and were crowned champions for the first time. The last time a D.C. team won the world series was back in 1924, when the Washington Senators beat the New York Giants.

“Voyage” is a 2021 album released by ABBA, the first collection of new songs recorded by the group since “The Visitors” in 1981. The album’s release was much anticipated all around the world, and sold one million units in the first week.

32 Where elbows might be on the table? : PASTA BAR

“Pion” is short for “pi meson”, and is the name given to a subatomic particle.

A meson is an unstable subatomic particle, one made up of a quark and an antiquark.

The term “blush” has only been used in the world of wine since the late seventies, and is really only used here in the US. Today, we think of a blush as a relatively sweet pink wine, and a rosé as something more dry.

“Cesar Millan” is the real name of television’s “Dog Whisperer”. Millan has been working with overly aggressive dogs on his show “Dog Whisperer with Cesar Millan” since 2004. Millan was an illegal immigrant from Mexico in the US back in 1990, became legal in 2000 and then became a US citizen in 2009.

Baylor is a private Baptist university in Waco, Texas that was founded in 1845, making it the oldest continuously-operating university in the state. Baylor is named for US Congressman and Baptist minister Robert Emmett Bledsoe Baylor, who co-founded the school. The list of Baylor’s past presidents includes Ken Starr, the independent counsel whose investigation led to the impeachment of President Bill Clinton.