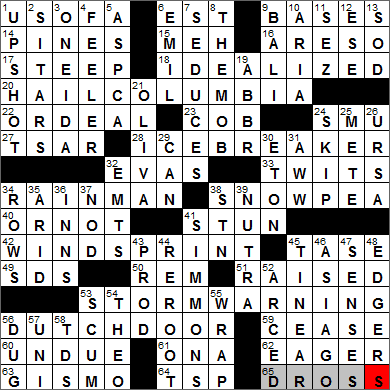 Today’s Wiki-est, Amazonian Googlies
Across
1. Where the Stars and Stripes flies, familiarly US OF A
Legend has it that Betsy Ross made the first American flag for General George Washington. However, this story only surfaced during the centennial celebrations of 1876, and although Betsy Ross was indeed one of several flag makers in Philadelphia in the days of George Washington, sadly there’s no definitive evidence that Ross provided that first stars and stripes.

15. “I’m underwhelmed” MEH!
“Meh!” is one of those terms unfamiliar to me outside of crosswords. It is a modern colloquialism meaning “I’m not great, but not bad”.

20. *Vice president’s official entrance march HAIL, COLUMBIA (from “hailstorm”)
“Hail, Columbia” is an American patriotic song that served as the unofficial national anthem until “The Star-Spangled Banner” was adopted officially in 1931. “Hail, Columbia” was composed in 1789 for the inauguration of George Washington as president, and was first titled “The President’s March”. Today it is used as the entrance march for the US Vice President.

24. Church-owned Dallas sch. SMU
Southern Methodist University (SMU) is located in University Park, Texas (part of Dallas), and was founded in 1911. In 2008, President George W. Bush agreed to the selection of SMU as the site for his Presidential Library. The building is currently under construction and is expected to open in 2013.

27. Bygone Russian despot TSAR
The term czar (also tsar) is a Slavic word that was first used as a title by Simeon I of Bulgaria in 913 AD. “Czar” is derived from the word “Caesar”, which was synonymous with “emperor” at that time.

32. Gabor and Peron EVAS
Eva Gabor was the youngest of the Gabor sisters, all three of whom were celebrated Hollywood actresses and socialites (her siblings were Zsa-Zsa and Magda). The Gabor sisters were born in Budapest and immigrated to the United States separately, with Eva being the first to arrive. Eva broke into movies, but her most famous role was on the TV sitcom “Green Acres” in which she played the lovely character Lisa Douglas opposite Eddie Albert. One of Eva’s claims to fame is the unwitting promotion of the game called “Twister”, the sales of which were languishing in 1996. In an appearance on “The Tonight Show” she got on all fours and played the game with Johnny Carson. Sales took off immediately, and Twister became a huge hit.

Nowadays, President Juan Perón of Argentina is perhaps less well-known than his second wife, Eva Perón of “Evita” fame. Juan and Eva Perón were overthrown in a military coup in 1955, although Juan Perón was returned to power in 1973 when he served for only nine months before he passed away. Juan was succeeded in office by his third wife, Isabel Perón.

33. Irritating sorts TWITS
“Twit” is a word not used very often here in America. It’s a slang term that was quite common in England where is was used for “someone foolish and idiotic”.

34. *Hoffman’s 1988 title savant RAIN MAN (from “rainstorm”)
“Rain Man” is an entertaining and thought-provoking film released in 1988 starring Tom Cruise and Dustin Hoffman. It’s all about a self-possessed yuppie (Cruise, appropriate casting!) who discovers he has a brother who is an autistic savant (Hoffman). Hoffman won the Best Actor Oscar for his performance, and “Rain Man” won the Best Picture award.

38. *Stir-fry veggie SNOW PEA (from “snowstorm”)
The snow pea lives up to its name. It actually can continue growing even when it is snowing.

42. *Endurance-building full-speed run WIND SPRINT (from “windstorm”)
Athletes might use a series of sprints to develop breath and endurance. Each one of these sprints is called a “wind sprint”.

45. Zap with a weapon TASE
Victor Appleton wrote a novel for young adults called “Tom Swift and His Electric Rifle”. The company that developed the TASER electroshock weapon named its product as a homage to the novel. The acronym TASER stands for “Thomas A. Swift’s Electric Rifle”. Interesting, eh?

49. ’60s militant campus org. SDS
Students for a Democratic Society (SDS) was an activist group in the sixties. The SDS organized the largest student strike in the history of the United States on 26 April 1968, with about a million students staying away from class that day. The “Students for a Democratic Society” name was revived in 2006 with the foundation of a new US-based student organization with left wing beliefs. Today’s SDS was founded by a pair of high school students from Greenwich Village, New York.

50. Sleep phase initials REM
REM is an acronym standing for Rapid Eye Movement sleep. REM sleep takes up 20-25% of the sleeping hours and is the period associated with one’s most vivid dreams.

56. Entrance whose top half opens separately DUTCH DOOR
“Dutch door” is the American term for what we call back in Ireland a “half door”, and for what is known in Britain as a “stable door”.

63. Thingy GISMO
The word “gizmo” (also “gismo”) was originally slang used by both the US Navy and the Marine Corps, but the exact origin seems unknown. Nowadays, “gizmo” is a general term used for a device or a part when the correct name escapes one (so I use it a lot …). Oh, and Gizmo is the name of the dog belonging to my son and his fiancee.

65. Smeltery refuse DROSS
When metals are smelted, there is a scum made up of impurities that floats on the surface of the molten metal. This scum is called “dross” and is drawn off and discarded. The term “dross” then came to mean any waste or impure matter.

Down
1. End result UPSHOT
Back in the 1500s, the “up shot” was the final shot in an archery match. We now use the term “upshot” to describe the end result, the conclusion.

2. Indian stringed instruments SITARS
The sitar has been around since the Middle Ages. The sitar is a stringed instrument that is played by plucking, and is used most often in Hindustani classical music. In the West we have been exposed to the instrument largely through the performances of Ravi Shankar and some music by George Harrison of the Beatles, a onetime student of Shankar.

3. New York lake near Syracuse ONEIDA
Oneida Lake is the largest lake lying entirely within the state of New York. Oneida is situated close to New York’s Finger Lakes, but it isn’t one of them. Having said that, some regard Oneida Lake as the “thumb” that goes along with the “fingers”.

5. Furry friends’ protection org. ASPCA
Unlike in most developed countries, there is no “umbrella” organization in the US with the goal of preventing cruelty to animals. Instead there are independent organizations set up all over the nation using the name SPCA. Having said that, there is an organization called the American Society for the Prevention of Cruelty to Animals (ASPCA) that was originally intended to operate across the country, but really it now focuses its efforts in New York City.

6. Jannings of classic cinema EMIL
Emil Jannings, an actor from Switzerland, was the first person to receive an Oscar. He was the star of the 1928 silent movie called “The Last Command”.

8. Cosa Nostra THE MOB
Apparently “Cosa Nostra” is the real name for the Italian Mafia. “Cosa Nostra” translates as “our thing” or “this thing of ours”. The term first became public in the US when the FBI managed to turn some members of the American Mafia. The Italian authorities established that “Cosa Nostra” was also used in Sicily when they penetrated the Sicilian Mafia in the 1980s. The term “mafia” seems to be just a literary invention that has become popular with the public.

9. Indonesian island BALI
Bali is the most important tourist destination in Indonesia and is an island lying east of Java. In recent years, Bali’s tourist industry has been badly hit in the aftermath of two terrorist bombings. The first one, in 2002, killed 202 people, mainly foreign tourists in a nightclub.

26. Constellation bear URSA
The constellation called Ursa Major (Latin for “Larger Bear”) is often just called the Big Dipper because of its resemblance to a ladle or dipper. Ursa Major also resembles a plow, and that’s what we usually call the same constellation back in Ireland: the “plough”.

Ursa Minor sits right beside the constellation Draco (Latin for “dragon”). Ursa Minor used to be considered the wing of Draco, and so was once called “Dragon’s Wing”.

30. Thames school ETON
The world-famous Eton College is just a brisk walk from Windsor Castle, which itself is just outside London. Eton is noted for producing many British leaders including David Cameron who took power in the last UK general election. The list of Old Etonians also includes Princes William and Harry, the Duke of Wellington, George Orwell, and the creator of James Bond, Ian Fleming (as well as 007 himself as described in the Fleming novels).

The River Thames flowing though London is the longest river entirely located in England.

39. __Sweet: aspartame NUTRA-
NutraSweet is a brand name for the artificial sweetener aspartame. Aspartame was discovered by a chemist working for Searle in 1965, but it took 15 years for the company to be granted approval for its sale. I wonder why …???

41. Beautyrest mattress maker SIMMONS
The Simmons Bedding Company was founded in Kenosha, Wisconsin in 1870 by Zalmon G. Simmons, although back then the factory produced wooden insulators and cheese boxes. Simmons made its first wire-woven mattresses in 1876.

46. Italian cheese ASIAGO
Asiago is a crumbly cheese, named after the region in northeastern Italy from where it originates.

47. Has an inkling SENSES
Our word “inkling” apparently comes from the Middle English word “inclen” meaning “to hint”.

53. Mr. Clean target SCUM
“Mr. Clean” is a brand of household cleaner from Procter & Gamble. “Mr. Clean” is a sold as Maestro Limpio in Mexico, Monsieur Propre in France, and as Monsieur Net in French Canada.

54. “The Cosby Show” son THEO
Malcolm-Jamal Warner was the child actor who played Theo Huxtable on “The Cosby Show”. You can see the grown-up Warner today playing Dr. Alex Reed on the BET sitcom “Reed Between the Lines”.