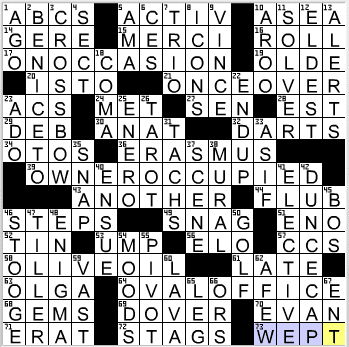 CROSSWORD SETTER: Gail Grabowski & Bruce Venzke
THEME: O! O! … the themed answers today are made up of two words, each starting with the letter O:

17A. Now and then : ON OCCASION
21A. Quick look : ONCE-OVER
39A. Lived in by the seller : OWNER-OCCUPIED
58A. Vinaigrette dressing ingredient : OLIVE OIL
64A. Presidential workplace : OVAL OFFICE

Today’s Wiki-est, Amazonian Googlies
Across
5. When Juliet drinks the potion : ACT IV
In Shakespeare’s “Romeo and Juliet”, the last words uttered by Romeo are:

14. “Sommersby” actor Richard : GERE
Richard Gere has played such great roles on the screen, and I find him to be a very interesting character off the screen. Gere has been studying Buddhism since 1978 and is a very visible supporter of the Dalai Lama and the people of Tibet.

The 1993 romantic drama “Sommersby” stars Richard Gere and Jodie Foster. The film is about an imposter who returns after the Civil War and moves in with a woman while claiming to be her husband. The real husband returns, and things get very rancorous. I know it sounds implausible, but the storyline is based on true events that took place in France in the 1500s.

19. Ye __ Tea Shoppe : OLDE
The word “olde” wasn’t actually used much earlier than the 1920s. “Olde” was introduced to give a quaint antique feel to brand names, shop names etc.

27. One of 100 members of Cong. : SEN
The six-year terms enjoyed by US senators are staggered, so that every two years about one third of the US Senate seats come up for reelection.

32. Game with sharp projectiles : DARTS
Darts is a wonderful game often played in British and Irish pubs, even over here in America. The scoring in a traditional game of darts is difficult to describe in a sentence or two, but the game of darts called “Round the Clock” is simply hitting the numbers 1 through 20 in sequence.

34. Siouan speakers : OTOS
The Otoe (also Oto) Native American tribe originated in the Great Lakes region as part of the Winnebago or Siouan tribes. The group that would become the Otoe broke away from the Winnebago and migrated southwestwards ending up in the Great Plains. In the plains the Otoe adopted a semi-nomadic lifestyle dependent on the horse, with the American bison becoming central to their diet.

36. Dutch Renaissance humanist : ERASMUS
Desiderius Erasmus was a Dutch priest and theologian. Erasmus was a very prolific and successful writer and in the 1530s his written works accounted for 10-20% of all book sales in the world. A famous quotation accredited to Erasmus is:

In the land of the blind, the one-eyed man is king.

49. Fly in the ointment : SNAG
Our expression “a fly in the ointment” is used when we come across some relatively minor snag that is a hindrance to completing something. We started using the expression in the 1700’s, and it refers to some lines in the Bible; Ecclesiastes 10:1:

Dead flies cause the ointment of the apothecary to send forth a stinking savour: so doth a little folly him that is in reputation for wisdom and honour.

51. Eclectic musician Brian : ENO
Brian Eno started out his musical career with Roxy Music. However, Eno’s most oft-played composition (by far!) is Microsoft’s “start-up jingle”, the 6-second sound you hear when the Windows operating system is booting up. Eno might have annoyed the Microsoft folks when he stated on a BBC radio show, “I wrote it on a Mac. I’ve never used a PC in my life; I don’t like them”.

52. Like the Oz woodsman : TIN
The actor Buddy Ebsen is best known for playing Jed Clampett in television’s “The Beverly Hillbillies”. Ebsen had been cast in the role of the Tin Man in the 1939 movie “The Wizard of Oz”, but he developed an allergy to the aluminium dust that was used in the makeup. He ended up in hospital and had to walk away from the part. Ebsen blamed “The Wizard of Oz” on persistent problems that he had with his lungs in subsequent years. But Ebsen lived 16 years longer that any of the other major cast members of the film, so maybe he got the last laugh!

56. “Xanadu” rock gp. : ELO
The title song of the 1980 movie “Xanadu” was performed by the Electric Light Orchestra (ELO) and Olivia Newton-John (who starred in the film). Despite the popularity of ELO around the world, the song “Xanadu” was the band’s only number one hit back in their homeland of the UK.

57. Shares an email with : CCS
I wonder do the kids of today know that “cc” stands for carbon copy, and do they have any idea what a carbon copy was? Do you remember how messy carbon paper was to handle?

58. Vinaigrette dressing ingredient : OLIVE OIL
“Vinaigrette” is the diminutive of “vinaigre”, the French word for “vinegar”. And so what we tend to call vinaigrette dressing here in the US is usually referred to as French dressing in the British Isles
.
63. ’70s Russian gymnast Korbut : OLGA
Olga Korbut is from modern-day Belarus, but was born during the days of the Soviet Union. Korbut competed for the USSR team in the 1972 and 1976 Olympic Games. She was 17 when she appeared in the 1972 Munich Games, and had been training in a sports school since she was 8-years-old. The world fell in love with her as she was a very emotional young lady, readily expressing joy and disappointment, something that we weren’t used to seeing in athletes from behind the Iron Curtain. Korbut immigrated to the US in 1991 and now lives in Scottsdale, Arizona.

64. Presidential workplace : OVAL OFFICE
Although there have been several “oval offices” used by US presidents in the White House, the current Oval Office was designed and constructed at the bequest of President Franklin D. Roosevelt. The room has four doors: one door opens onto the Rose Garden; a second door leads to a small study and dining room; a third opens onto the main corridor running through the West Wing; the fourth door opens to the office of the president’s secretary.

69. Delaware’s capital : DOVER
The city of Dover is the capital of Delaware, and is the state’s second biggest city (after Wilmington). Dover is named after the town of Dover on the south coast of England, and was given that name by William Penn. The English Dover lies in the county of Kent, and the American Dover resides in Kent County.

70. “__ Almighty”: Steve Carell film : EVAN
Steve Carell’s “Evan Almighty” was actually a sequel, to Jim Carrey’s “Bruce Almighty”. “Evan Almighty” is a cute enough film, with Evan mutating into a Noah character who goes as far as building an ark in his front yard.

The actor Steve Carell has achieved great success on both television and in movies. On the small screen he came to prominence on “The Daily Show with Jon Stewart” and then of course as the lead in the US version of “The Office”. On the big screen he starred in “The 40-Year-Old Virgin”, “Evan Almighty” and my personal favorite, ”Dan in Real Life”, starring opposite the wonderful Juliette Binoche.

71. Part of Q.E.D. : ERAT
QED is used at the end of a mathematical proof or a philosophical argument. The QED acronym stands for the Latin “quod erat demonstrandum” meaning “that which was to be demonstrated”.

Down
5. GP’s gp. : AMA
The American Medical Association (AMA) was founded in 1847 at the Academy of Natural Sciences in Philadelphia. The first female member was allowed to join the AMA in 1868, but the first African American members weren’t admitted until one hundred years later, in 1968.

26. Mystic’s deck : TAROT
Tarot cards have been around since the mid-1400s, and for centuries were simply used for entertainment as a game. It has only been since the late 1800s that the cards have been used by fortune tellers to predict the future.

38. Picture on a ceiling : MURAL
A “mural painting” is a painting which is applied directly to a wall or a ceiling. The term comes from the Latin “murus” meaning “wall”.

42. Quaint headgear for a class clown : DUNCE CAP
John Duns Scotus was a theologian and scholar in the Middle Ages, responsible for many writings that were used as textbooks in British universities of the day. New ideas developed during the English Renaissance, but Duns Scotus and his followers resisted the changes. The word “dunse” came into use as a way of ridiculing those refusing to learn anything new, a precursor to our modern usage of “dunce”.

45. Red Sox home: Abbr. : BOS
The Boston Red Sox is one of the most successful Major League Baseball teams and so commands a large attendance, but only when on the road. The relatively small capacity of Boston’s Fenway Park, the team’s home since 1912, has dictated that every game the Red Sox has played there has been a sell out since May of 2003.

46. Unwitting victim : STOOGE
We use the term “stooge” these days to for an unwitting victim, or perhaps the straight man in a comedy duo. The first “stooges” were simply stage assistants, back in the early 1900s.

47. Rudder control : TILLER
A rudder is usually a flat sheet of wood or metal located at the stern of a boat, under the waterline. The rudder is attached to a rudder post, which rotates to change the orientation of the rudder hence steering the boat. That rotation of the rudder past can be achieved by pulling or pushing a lever at the top of the post called a tiller.

67. Tonsillitis M.D. : ENT
An ear, nose and throat specialist is an ENT.

The palatine tonsils are located at the back of the human throat. The exact role that tonsils play isn’t completely understood, but it is known that they are in the first line of defense in the body’s immune system. They provide some level of protection against pathogens that are ingested and inhaled.