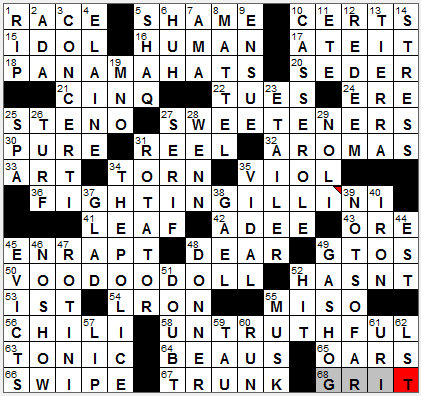 CROSSWORD SETTER: James Sajdak
THEME: All the Vowels … the five theme answers make use of the five vowels in order:

Today’s Wiki-est, Amazonian Googlies
Across
10. Altoids alternative CERTS
Certs was the first breath mint to be marketed nationally in the US, hitting the shelves in 1956. It’s called a mint, but it isn’t really as it contains no mint oil and instead has its famous ingredient named “Retsyn”.

18. Tropical headgear PANAMA HATS
Panama hats are also known as Jipijapas, named for a town in Ecuador (and not Panama) that was a major player in the hat trade.

20. Passover ritual SEDER
The Passover Seder is a ritual feast that marks the beginning of the Jewish Passover holiday, celebrating the liberation of the Israelites from slavery in Egypt. One of the traditions at the meal is that the youngest child at the table asks “The Four Questions”, all relating to why this night is different from all other nights in the year:

25. Low-tech note taker STENO
Stenography is the process of writing in shorthand. The term comes from the Greek “steno” (narrow) and “graphe” (writing).

35. Six-stringed instrument, usually VIOL
The Viola da gamba (also called simply the viol) is a bass instrument in what is known as the the viol family, with a tonal range that about matches that of the modern-day cello. It is the second largest of all the viols, so is played resting on the floor between the legs. In fact, “viola da gamba” is Italian translating into “viol for the leg”.

36. Urbana-Champaign NCAA team FIGHTING ILLINI
The Illini (or the Fighting Illini) is the name given to the athletic teams and marching band of the University of Illinois at Urbana-Champaign. The name Illinois is a French name that was given to the people who lived in the area (called Illiniwek).

53. Mao follower? -IST
The Maoist philosophy holds that the agrarian worker, as opposed to the more general working class, is the driving force in transforming from a capitalist society into a socialist society.

54. Scientology’s __ Hubbard L RON
L. Ron Hubbard wrote a self-improvement book in 1950 called “Dianetics: The Modern Science of Mental Health”. A few years later the concepts were used in the founding of the Church of Scientology.

55. Sushi bar soup MISO
Miso is the name of the seasoning that makes the soup. Basic miso seasoning is made by fermenting rice, barley and soybeans with salt and a fungus (!) to produce a paste. The paste can be added to stock to make miso soup, or perhaps to flavor tofu.

56. Cook-off potful CHILI
The full name for the dish that is often called simply “chili” is chili con carne, Spanish for “peppers with meat”. The dish was invented by immigrants from the Spanish Canary Islands in the city of San Antonio, Texas (a city which the islanders founded). The San Antonio Chili Stand was a popular attraction at the 1893 Chicago World’s Fair, and that stand introduced the dish to the rest of America and to the world.

63. Mixer for a mixologist TONIC
The original tonic water was a fairly strong solution of the drug quinine dissolved in carbonated water. It was used in tropical areas in South Asia and Africa where malaria is rampant. The quinine has a prophylactic effect against the disease, and was formulated as “tonic water” so that it could be easily distributed. In British colonial India, the colonial types got into the habit of mixing in gin with the tonic water to make it more palatable by hiding the bitter taste of the quinine. Nowadays, the level of quinine in tonic water has been dropped, and sugar has been added.

64. Boyfriends BEAUS
“Beau” is the French word for “beautiful”, in the male sense.

Down
2. Org. concerned with crowns ADA
The American Dental Association (ADA) is the largest and oldest national dental association in the world. Today the ADA is based in Chicago, but the association was founded in Niagara Falls, New York in 1859. The ADA started out as a group of 26 dentists and now has more than 152,000 members.

3. Mozart works CONCERTI
A concerto is a musical work usually composed of three movements, and usually written for a solo instrument accompanied by an orchestra.

4. Pal of Jerry Seinfeld ELAINE
The character of Elaine Benes, unlike Jerry, Kramer and George, did not appear in the pilot episode of “Seinfeld”. NBC executives specified the addition of a female lead when they picked up the show citing that the situation was too “male-centric”.

5. Retired seven-foot NBAer SHAQ
Shaquille O’Neal is one of the heaviest players ever to have played in the NBA (weighing in at around 325 pounds). Yep, he’s a big guy … 7 foot 1 inch tall.

7. “I __ Rock” AM A
“I Am a Rock” is a lovely song written by Paul Simon that appears on the Simon and Garfunkel album “Sounds of Silence”.

8. Fisher-Price parent company MATTEL
Mattel is the world’s largest toy manufacturer. Mattel was founded by Harold “Matt” Matson and Elliot Handler in 1945, and they chose the company name by combining “Matt” with “El-liot” giving “Matt-el”.

11. Summer on the Seine ETE
One might spend the summer (été) under the sun (le soleil) in France.

23. Online shopkeeper ETAILER
“Etail” is the term used these days for online shopping. Etail is often compared to regular shopping in the “real world” by juxtaposing it with a “brick and mortar” store.

25. Place for pampering SPA
The word “spa” migrated into English from Belgium, as Spa is the name of a municipality in the east of the country that is famous for its healing hot springs. The name “spa” comes from the Walloon word “espa” meaning “spring, fountain”.

27. Calligrapher’s flourish SERIF
Serifs are details on the ends of characters in some typefaces. Typefaces without serifs are known as sans-serif (using the French word “sans” meaning “without”). Some people say that serif fonts are easier to read on paper, whereas sans-serif fonts work better on a computer screen. I’m not so sure though …

28. Question of time, to Telemann WENN
“Wenn” is the German for “when”.

Georg Philipp Telemann was a German composer in the Baroque period. Interestingly, Telemann was almost completely self-taught as a musician. Telemann was a good friend of George Frideric Handel and also Johann Sebastian Bach. In fact, Telemann was the godfather of Bach’s son Carl Philipp Emanuel.

29. __ me tangere NOLI
“Noli me tangere” is Latin for “touch me not”. The words are the Latin translation of “cease holding on to me” written in Greek in the Gospel of John. They are words spoken by Jesus to Mary Magdalene after his resurrection.

31. Barbecue spit, e.g. ROTATOR
It is believed that our word “barbecue” comes from the Taíno people of the Caribbean in whose language “barbacoa” means “sacred fire pit”.

34. “Every Breath You Take” band THE POLICE
The Police was a trio formed in London in 1977, with Sting being the most famous member and lead singer.

35. “Myra Breckinridge” author VIDAL
Gore Vidal is an author and political activist from West Point, New York. Vidal’s works have always been controversial. His 1948 novel “The City and the Pillar” created a fuss because it featured blatant homosexuality.

Even today, Gore Vidal’s 1968 novel “Myra Breckinridge” is considered controversial. I haven’t read it, but I understand it addresses transsexuality and other sexual practices usually considered to be outside the norm. There was a movie version of the novel made in 1970, with Raquel Welch in the title role.

47. Spiral pasta ROTINI
Rotini is the corkscrew-shaped pasta that is often used in pasta salads.

48. One of Dancer’s partners DONNER
We get the names for Santa’s reindeer from the famous 1823 poem called “A Visit from St. Nicholas”, although we’ve modified a couple of the names over the years. The full list is:

Rudolph was added to the list by retailer Montgomery Ward, would you believe? The store commissioned Robert L. May to create a booklet that could be handed out to children around Christmas in 1939, and May came up with Rudolph the Red-Nosed Reindeer.

55. Perfumery scent MUSK
Musk has such an elegant connotation these days because of it’s use in the world of perfumery. However, its origin is not quite so glamorous. The original substance called musk, used in perfumes, was extracted from a gland in the rectal area of the male musk deer. The name “musk” is a Sanskrit word for “testicle”.

59. Frat house letter TAU
Tau is the 19th letter of the Greek alphabet, the letter which gave rise to our Roman “T”. Both the letters tau (T) and chi (X) have long been symbolically associated with the cross.

61. The Rams of the NCAA’s Atlantic 10 Conf. URI
The University of Rhode Island (URI) was first chartered as an agricultural school, back in 1888. URI’s main campus today is located in the village of Kingston.

62. D-Day vessel LST
LST stands for Landing Ship, Tank. LSTs were the large vessels used mainly in WWII that had doors at either ends through which tanks and other vehicles could roll off and onto beaches. The design concept persists to this day in the huge fleet of commercial roll-on/roll-off car ferries, all inspired by the LST.