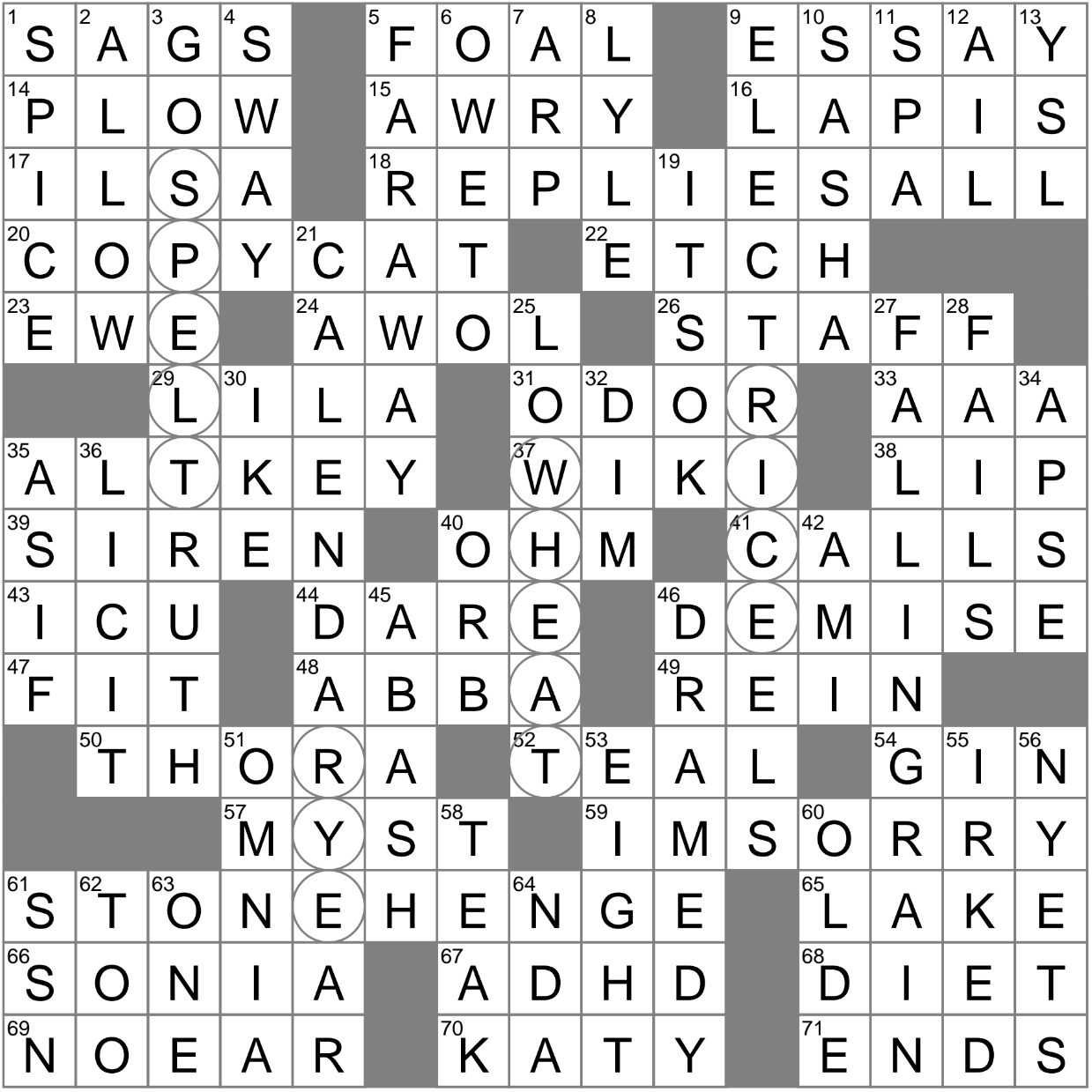 Themed answers are in the down-direction, and each includes a FALLIN’ GRAIN as a hidden word:

Harrows and plows have similar uses, in that they both break up the soil. Plows are used to bring deep soil to the surface, and to bury weeds so that they decay and release nutrients. Harrows break up and smooth just the surface soil, often after plowing.

Lapis lazuli is a blue, semi-precious stone mined mainly in Afghanistan. “Lapis Lazuli” is Latin for “stone of Lazhward”, referring to the Persian name for the location where the stone was mined. Our word “azure”, a shade of blue, has the same root.

17 To whom Rick says, “The Germans wore gray. You wore blue” : ILSA

24 Unaccounted for, for short : AWOL

Gandalf is an important character in the J. R. R. Tolkien novels “The Hobbit” and “The Lord of the Rings” trilogy. He is a wizard known as Gandalf the Grey during his lifetime, and as Gandalf the White after he returns from the dead.

Lila Wallace founded the “Reader’s Digest” along with her husband in 1922, and initially operated out of a basement office in New York City. The initial print runs were limited to about 5,000 copies. Today, “Reader’s Digest” has about 100 million readers in 163 countries worldwide.

A wiki is a website on which users are allowed to create and edit content themselves. The term “wiki” comes from the name of the first such site, introduced in 1994 and called WikiWikiWeb. “Wiki” is a Hawaiian word for “quick”, and is used because comprehensive content is created very quickly, as there are so many collaborators contributing to the site.

In Greek mythology, the Sirens were seductive bird-women who lured men to their deaths with their song. When Odysseus sailed close to the island home of the Sirens he wanted to hear their voices, but in safety. He had his men plug their ears with beeswax and then ordered them to tie him to the mast and not to free him until they were safe. On hearing their song Odysseus begged to be let loose, but the sailors just tightened his bonds and the whole crew sailed away unharmed. We sometimes use the term “siren” today to describe a seductively charming woman.

The intensive care unit (ICU) is where many patients head after leaving the operating room (OR).

Back in the 1400s, a demise was the transfer of an estate via a will. The usage of “demise” extended in the mid-1700s to the contemporary meaning of “death, downfall”.

A gimlet is a relatively simple cocktail that is traditionally made using just gin and lime juice. The trend in more recent times is to replace the gin with vodka.

Sonia Sotomayor was the first Hispanic justice appointed to the US Supreme Court, and the third female justice. Sotomayor was nominated by President Barack Obama to replace the retiring Justice David Souter.

Adderall is a drug used in the treatment of attention deficit hyperactivity disorder (ADHD) as well as narcolepsy. Adderall is also misused as a recreational drug as it is considered an aphrodisiac and a euphoriant.

“Roar” is a 2013 song co-written and performed by Katy Perry. It has a great chorus:

Spelt is a wheat species that has been around for thousands of years. Once a staple in the human diet, it was largely replaced by bread wheat. Spelt is seeing a revival in recent years, as its growth is less dependent on artificial fertilizers.

Lyle is a crocodile who lives in the bathtub of Manhattan brownstone in the “Lyle the Crocodile” series of children’s books by Bernard Waber. Lyle makes his first appearance in the 1962 book “The House on East 88th Street”.

A paddy field is a flooded piece of land used to grow rice, or perhaps taro. The water reduces competition from weeds allowing the rice to thrive. The word “paddy” has nothing to do with us Irish folk, and is an anglicized version of the word “padi”, the Malay name for the rice plant.

Sasha Fierce is an alter-ego that Beyoncé Knowles has developed for her stage and recording work. Beyoncé describes Sasha as very sensual and aggressive. She released a studio album called “I Am… Sasha Fierce” in 2008.

“Sous-vide” is a cooking method in which the food is sealed in plastic bags and very slowly steamed in a water bath. The term “sous-vide” is French for “under vacuum”.

30 Barinholtz of “The Mindy Project” : IKE

Ike Barinholtz is an actor and comedian who appeared on MADtv from 2002 until 2007. More recently, Barinholtz became a writer on the TV show “The Mindy Project”, and was then cast as Nurse Morgan Tookers.

“The Mindy Project” is a Fox sitcom that stars and was created by Mindy Kaling. Mindy plays an obstetrician/gynecologist, a role that was inspired by her own mother who is an OB/GYN.

Teak is a hardwood tree in the mint family that is commonly found in monsoon forests of Asia. Teak’s tight grain and high oil content make it very suitable for constructing outdoor furniture, where weather resistance is valued. For the same reason, teak is the wood of choice for wooden decks on boats.

So often, we are asked for “the last four digits” of our Social Security Numbers (SSNs).

63 Number of players needed to play solitaire : ONE

I think that a single-player card game is usually called “Solitaire” in the US whereas we use the name “Patience” back in Ireland.