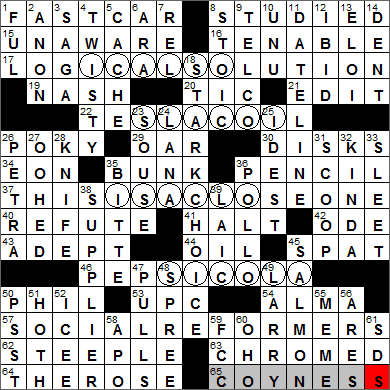 CROSSWORD SETTER: Jeff Wechsler
THEME: Social Changes … todays’ grid has four answers that include a string of six circled letters, with the six letters each being anagrams of the word SOCIAL:

57A. Advocates for change, and a hint to this puzzle’s circled letters SOCIAL REFORMERS

Today’s Wiki-est, Amazonian Googlies
Across
1. Dragster, e.g. FAST CAR
Back in the 18th century drag was slang for a wagon or buggy, as it was “dragged” along by a horse or horses. In the 1930s, the underworld adopted drag as slang for an automobile. This sense of the word was imported into automobile racing in the forties, giving the name to “drag racing”. A drag race is basically a competition between two cars to determine which can accelerate faster from a standstill.

17. Sherlock Holmes forte LOG(ICAL SOL)UTION
In the “Sherlock Holmes” stories written by Sir Arthur Conan Doyle, the famous detective has lodgings at 221b Baker Street in London. Holmes shares rooms with his friend and chronicler Dr. Watson. The landlady in the residence is the amiable Mrs. Hudson.

19. Steve of the Lakers NASH
Steve Nash is a professional basketball player who plays for the Phoenix Suns. Nash is from Canada, although he was actually born in South Africa. He became the first NBA player to carry the Olympic torch and light the Olympic cauldron, which he did at the 2010 Winter Olympics held in Vancouver, Canada.

22. 1891 self-named electrical invention TE(SLA COI)L
A Tesla coil is used to create the high voltages needed to ionize air in those pyrotechnic shows where sparks jump from globe to globe. The same technology was used up to the twenties in spark-gap radio transmitters which were central to wireless telegraphy back then.

29. Crew member OAR
Crew is another name for competitive team rowing. The narrow boat used is called a “shell”.

35. “Nonsense!” BUNK
The word “bunk” is short for “bunkum”, the phonetic spelling of “Buncombe”, which is a county in North Carolina. Supposedly, a state representative made a dull and irrelevant speech that was directed to his home county of Buncombe, bringing the term “bunkum” into the language with the meaning of “nonsense”. The derivative word “debunk” first appeared in a novel by William Woodward in 1923, when he used it to describe “taking the bunk out of things”.

46. Product introduced as Brad’s Drink in 1893 PEP(SI COLA)
The Pepsi-Cola formulation was developed by one Caleb Bradham who made the drink at home and sold it as “Brad’s Drink”. Bradham’s aim was to provide a drink that was pleasant to taste, that would aid digestion and boost energy. Included in the formula were pepsin (a digestive enzyme) and kola nuts. These two ingredients inspired the brand name we use today: Pepsi-Cola.

50. TV doctor PHIL
Dr. Phil (McGraw) met Oprah Winfrey when he was hired to work with her as a legal consultant during the Amarillo Texas beef trial (when the industry sued Oprah for libel over “Mad Cow Disease” statements). Oprah was impressed with Dr. Phil and invited him onto her show, and we haven’t stopped seeing him since …

53. Market tracking aid: Abbr. UPC
UPC stands for Universal Price Code or Universal Product Code. The first UPC-marked item to get scanned in a store was on June 26, 1974 at 08:01 a.m. at Marsh’s supermarket in Troy, Ohio. It was a 10-pack of Wrigley’s Juicy Fruit chewing gum …

54. __ mater ALMA
The literal translation for the Latin term “alma mater” is “nourishing mother”. “Alma mater” was used in Ancient Rome to refer to mother goddesses, and in Medieval Christianity the term was used to refer to the Virgin Mary. Nowadays, one’s alma mater is the school one attended, either high school or college, usually one’s last place of education.

63. Like bumpers CHROMED
“Chrome” is the name given to a metallic coating of chromium metal that is applied to an object by electroplating.

64. Bette Midler classic THE ROSE
I am a huge, huge fan of Bette Midler. I love everything about the woman, her bawdy humor, her expansive personality, and of course her amazing voice. Midler will forever be associated with the 1979 film “The Rose”, loosely based on the life of the self-destructive singer Janis Joplin, with Bette playing the lead. Midler shows that she can act in this movie, and boy does she show that she can sing. The title song was written by Amanda McBroom and became a huge hit for Midler in 1979.

Down
2. Shortly ANON
“Anon” originally meant “at once” and evolved into today’s meaning of “soon” apparently just because the word was misused over time.

6. Constellation near Scorpius ARA
The constellation of Ara takes its name from the Latin word for “altar”.

7. Sikhism, e.g.: Abbr. REL
Sikhism is a religion that was founded in the 15th century in the Punjab region, which straddles the India-Pakistan border. Even though Sikhism was established relatively recently, it is now the fifth-largest organized religion in the world.

8. Dispassionate STOIC
Zeno of Citium was a Greek philosopher famous for teaching at the Stoa Poikile (Painted Porch) located on the north side of the Ancient Agora of Athens. Because of the location of his classes, his philosophy became known as stoicism (from “stoa” meaning “porch”). And yes, we get our adjective “stoic” from the same root.

9. The Bell System was one, briefly TELCO
A “telco” is a telecommunications company.

12. Footnote abbr. IBID
Ibid. is short for the Latin word “ibidem” and is typically found in footnotes and bibliographies. Ibid. is used to refer the reader to the prior citation, instead of giving the same information all over again (title, author etc.).

13. Simple race of fiction ELOI
In the 1895 novel by H. G. Wells called “The Time Machine”, there are two races that the hero encounter in his travels into the future. The Eloi are the “beautiful people” who live on the planet’s surface. The Morlocks are a race of cannibals living underground who use the Eloi as food.

23. W.C. Fields persona SOUSE
The word “souse” dates back to the 14th century and means “to pickle, steep in vinegar”. In the early 1600s the usage was applied to someone “pickled” in booze, a drunkard.

W. C. Fields worked hard to develop the on-screen image of a pretty grumpy old man. In his real life he was fairly grumpy too, and fond of protecting his privacy. He was famous for hiding in the shrubs around his house in Los Angeles and firing a BB gun at the legs of tourists who intruded on his property. Also Fields often played the drunk on-screen. In real life, Fields didn’t touch alcohol at all when he was younger, partly because he didn’t want to do anything to impair his skill as a juggler. But later in life he took to heavy drinking, so much so that it affected his health and interfered with his ability to perform.

24. Turner in films LANA
Lana Turner started work as a Hollywood actress at a very young age, signing up with MGM at only sixteen. Early in her career she earned the nickname “The Sweater Girl” after wearing a pretty tight sweater in the film “They Won’t Forget”, which was her film debut. She married eight times, to seven different husbands, the first of which was bandleader Artie Shaw. Shaw and Turner eloped and married on their very first date, when the young actress was just nineteen years old. After divorcing Shaw she married restaurateur Joseph Crane, but had the marriage annulled when she found out that Crane was still married to his first wife. The two had a daughter together, and so remarried when Crane’s divorce was finalized. Cheryl Crane was the daughter from the marriage to Joseph and she lived with Turner after her parents split up. When Cheryl was 14-years-old, her mother was romantically involved with a shady character named Johnny Stompanato. One evening Cheryl found her mother engaged in a violent argument with Stompanato, and Cheryl became so scared that she pulled out a gun and killed him in what was deemed to be justifiable homicide. Turner’s last marriage was to a nightclub hypnotist, Ronald Pellar, and that union lasted just six months as Pellar disappeared one day with a lot of Turner’s money and jewelry. Years later Turner said, “My goal was to have one husband and seven children, but it turned out to be the other way around.”

26. Ancient Jordanian archaeological city PETRA
The archaeological city of Petra in Jordan sounds like a fabulous sight,and is known for its beautiful buildings that have been carved out of the natural rock. Petra is Jordan’s most visited tourist attraction.

33. Bad fall SLEET
Apparently “sleet” is a term used to describe two weather conditions. One is a shower of ice pellets, smaller than hail, and the second is a mixture of rain and snow, with the snow melting as it falls. It’s the second definition that I have always used …

“S’il vous plaît” is French for “please”, literally “if it pleases you”.

36. Ristorante order POLLO
“Pollo” is the Italian word for chicken.

52. Frozen treat ICEE
Icee is the brand name of one of those slushy drinks. Ugh …

56. Father of Phobos and Deimos ARES
The Greek god Ares is often referred to as the Olympian god of warfare, but originally he was regarded as the god of blood-lust and slaughter. Ares united with Aphrodite to create several gods, including Phobos, Deimos and Eros.

59. Radio frequency regulating org. FCC
TV broadcasting is monitored by the Federal Communications Commission (FCC). The FCC has been around since 1934, when it replaced the Federal Radio Commission.

61. Tom Hayden’s ’60s org. SDS
Students for a Democratic Society (SDS) was an activist group in the sixties. The SDS organized the largest student strike in the history of the United States on 26 April 1968, with about a million students staying away from class that day. The “Students for a Democratic Society” name was revived in 2006 with the foundation of a new US-based student organization with left wing beliefs. Today’s SDS was founded by a pair of high school students from Greenwich Village, New York.

Tom Hayden is a political activist famous for the leadership role he played in the anti-war movement in the sixties. Hayden is also famous for being a former husband of actress Jane Fonda.