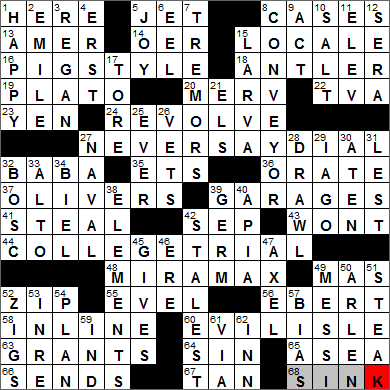 CROSSWORD SETTER: Jerry Edelstein
THEME: I’ll Be Heard at the End … today’s themed answers are well-known terms ending with an “I” sound that has been changed to an “I’ll” sound:

16A. Porky’s jacket and tie? PIG STYLE (from “pigsty”)
27A. Prohibition at the Ivory soap factory? NEVER SAY DIAL (from “never say die”)
44A. Pre-law classroom exercise? COLLEGE TRIAL (from “college try”)
60A. Bad place to be shipwrecked? EVIL ISLE (from “evil eye”)

Today’s Wiki-est, Amazonian Googlies
Across
14. “Come __ the sea, / Maiden with me”: Thomas Moore O’ER
“Come o’er the Sea” is a song with lyrics by Irish poet Thomas Moore.

Thomas Moore was an Irish poet and songwriter, best known for writing the lyrics of “The Minstrel Boy” and “The Last Rose of Summer”.

19. Source of many dialogues PLATO
Plato was a Greek philosopher and mathematician. He was a student of the equally famous and respected Socrates, and Plato in turn was the teacher and mentor of the celebrated Aristotle. Plato wrote a series of about 30 Socratic dialogues, prose works that feature Socrates as the main character.

20. Big name in game shows MERV
Merv Griffin was quite the entertainer, truly a mogul in the business. He started his career as a singer on the radio during the big band era. In the sixties he hosted his own talk show, and then famously developed such great game shows as “Jeopardy!” and “Wheel of Fortune”.

22. FDR power program TVA
The Tennessee Valley Authority (TVA) has to be one of America’s great success stories when it comes to economic development. Created in 1933, the TVA spearheaded economic development in the Tennessee Valley at the height of the Great Depression. Central to the success was the federally-funded construction of flood-control and electricity-generation facilities.

23. Longing YEN
The word “yen”, meaning “urge”, has been around in English since the very early 1900s. It comes from the earlier word “yin” imported from Chinese, which was used in English to describe an intense craving for opium!

27. Prohibition at the Ivory soap factory? NEVER SAY DIAL (from “never say die”)
Dial was the first antibacterial soap introduced in the US. It was given the name “Dial” as it was touted as offering “round-the-clock” protection against any odors caused by perspiration.

32. __ ghanouj: eggplant dish BABA
Baba ghanoush (also baba ghannouj) is an Arab dish with the main ingredient of mashed eggplant. It is sometimes served as a (delicious) dip.

36. Declaim ORATE
To declaim is to speak forcefully and passionately, often in a formal setting.

37. Twist et al. OLIVERS
“Oliver Twist” is of course a novel by Charles Dickens. It is a popular tale for adaptation to the big screen. There were two silent film versions, in 1909 and 1922, and the first talkie version was released in 1933, with many to follow. The latest “Oliver” for the big screen was a 2005 Roman Polanski production.

42. Equinox mo. SEP
An equinox is a phenomenon dictated by the tilt of the earth’s axis. Twice every year, that tilt “evens out” and the sun is equidistant from points at the same latitude both north and south of the equator. It is as if the earth has no tilt relative to the sun. The name equinox comes from the Latin for “equal night”, inferring that night and day are equally long, as the effect of the earth’s “tilt” is nullified.

43. “__ you be my neighbor?”: Mister Rogers WON’T
The “Mister Rogers’ Neighborhood” TV show starred Fred Rogers. It was the second longest running series on PBS television after that other iconic children’s show: “Sesame Street”.

48. 1993 Disney acquisition MIRAMAX
Miramax is film distributor in the US noted for its focus on independent and foreign movies. Now owned by Disney, the company was founded by Harvey and Bob Weinstein in 1979. The company name is a combination of the brothers’ parents names: Miriam and Max.

49. More, in Morelia MAS
Morelia is a city in central Mexico. The city is named for José María Morelos, who took over leadership of the Mexican War of Independence movement following the execution of Miguel Hidalgo y Costilla.

55. Daredevil Knievel EVEL
Daredevil Evel Knievel contracted hepatitis C from the many blood transfusions that he needed after injuries incurred during stunts. He had to have a liver transplant as a result, but his health declined after that. He eventually passed away in 2007.

Down
2. Rousseau’s “__, or On Education” EMILE
“Emile, or On Education” is a treatise penned by Genevan philosopher Jean-Jacques Rousseau that was first published in 1762. Parts of the treatise was poorly received by the Catholic church in France leading to Rousseau’s public condemnation by the Archbishop of Paris. Rousseau’s books were burned, warrants were issued for his arrest and he was forced to flee the country.

3. Duke of Cornwall’s wife, in Shakespeare REGAN
In William Shakespeare’s “King Lear”, Regan is the king’s second daughter. Regan vies with her older sister for influence over her father, and for the attentions of Edmund, the illegitimate son of the Earl of Gloucester.

4. Back then, back when ERST
Erstwhile means “in the past” or “once upon a time”.

12. Day song word SERA
As Doris Day told us, “que sera sera” is Spanish for “whatever will be, will be”. Day performed the Oscar-winning song in Alfred Hitchcock’s 1956 version of the movie “The Man Who Knew Too Much”.

15. Baby bug LARVA
A larva is an intermediate stage in the development of an insect. All four stages are embryo, larva, pupa and imago.

21. Little League starters? ELS
The starting letters in the words “Little League” are the letters L.

25. “Oh, when will they __ learn?”: Seeger lyric EVER
“Oh, when will they ever learn?” is a line from the Peter Seeger song “Where Have All the Flowers Gone?” Seeger got inspiration for the song from a traditional Cossack folk song that has the lyrics:

26. November honorees VETS
Veterans Day used to be known as Armistice Day, and is observed on November 11th each year. This particular date was chosen as the Armistice that ended WWI was signed on the 11th hour of the 11th day of the 11th month of 1918.

28. “Gone With the Wind” feature DRAWL
As casting proceeded for the movie version of “Gone With the Wind”, Clark Gable was a shoo-in from day one. The role of Scarlett was considered very desirable in the acting community, with Bette Davis on the shortlist, and Katherine Hepburn demanding an appointment with producer David O. Selznick to discuss the role. Vivien Leigh was an unlikely contender, an English actress for the definitive Southern belle role. Selznick was adamant though, and stuck by his choice despite a lot of protests.

29. “Aladdin” parrot IAGO
In the 1992 Disney feature “Aladdin”, there is a parrot called Iago. Iago is voiced by the comic Gilbert Gottfried.

32. Bartlett cousin BOSC
Bosc is a cultivar of the European Pear grown in the northwest of the United States. The Bosc is that pear with a skin the color of a potato, with a long neck. I always seem to use the potato as my point of reference. How Irish am I …?

33. Musical range ALTO
In choral music, an alto is the second-highest voice in a four-part chorus made up of soprano, contr(alto), tenor and bass. The word “alto” describes the vocal range, that of the deepest female singing-voice, whereas the term “contralto” describes more than just the alto range, but also its quality and timbre. An adult male’s voice (not a boy’s) with the same range as an alto is called a “countertenor”.

38. Halogens, e.g. ELEMENTS
The halogens are a group of elements in the periodic table consisting of fluorine, chlorine, bromine, iodine and astatine. The term “halogen” was the name that was originally proposed for chlorine when it was first discovered. When it was passed over in favor of chlorine, the name “halogen” was given to the group of elements to which chlorine belonged.

39. Lysol target GERM
The disinfectant called Lysol takes its name from the words “lysosome” and “solvent”. Lysosomes are structures found within cells that have the job of breaking up waste material and cellular debris.

40. Samoan port APIA
Apia is the capital city, and in fact the only city, of the Pacific island-nation of Samoa. The harbor of Apia is famous for a very foolish incident in 1889 involving seven naval vessels from Germany, the US and Britain. A typhoon was approaching so the safest thing to do was to head for open water away from land, but no nation would move its ships for fear of losing face in front of the others. Six of the ships were lost in the typhoon as a result and 200 American and German sailors perished. The British cruiser HMS Calliope barely managed to escape from the harbor and rode out the storm safely.

42. Most hackneyed STALEST
Hackney is a location in London that probably gave it’s name to a “hackney”, an ordinary type of horse carriage around 1300. By 1700 a “hackney” was a person hired to do routine work, and “hackneyed” meant “kept for hire”. Around the same time, “hackneyed” came to describe something so overused that it is no longer interesting. Sort of like some crossword answers …

47. Dorothy Hamill maneuver AXEL
An Axel is a forward take-off jump in figure skating. It was first performed by Norwegian Axel Paulsen at the 1882 World Figure Skating championships.

Dorothy Hamill was the Olympic and World Champion singles figure skater in 1976. She was noted for the “Hamill camel”, a skating move that started with a camel spin and transitioned into a sit spin.

49. Soccer star Lionel who won the Ballon d’Or each of the last four years MESSI
Lionel Messi is a soccer player from Argentina. Messi was awarded FIFA’s Ballon d’Or (Golden Ball) award from 2009 to 2013. The Ballon d’Or is presented to the player who is considered the best in the world in the prior year.

50. “Stormy Weather” composer ARLEN
Harold Arlen is a composer of popular music who will forever be associated with his composition “Over the Rainbow” from the movie “The Wizard of Oz”. Arlen also composed the music to “Come Rain or Come Shine”, “It’s Only a Paper Moon”, “Lydia the Tattooed Lady” and the wonderful “Stormy Weather”.

51. Salisbury __ STEAK
Salisbury steak is a dish made from minced beef and other ingredients, which has been formed into the shape of a steak. The dish is named for its inventor, Dr. J. H. Salisbury, who advocated its consumption as part of a low-carbohydrate weight-loss diet.

54. Blueprint PLAN
Blueprints are reproductions of technical drawings that are contact prints made on light-sensitive sheets. Blueprints were introduced in the 1800s and the technology available dictated that the drawings were reproduced with white lines on a blue background, hence the name “blue-print”.