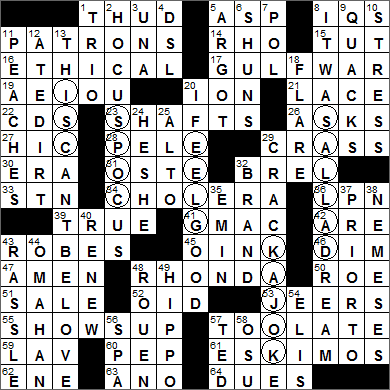 CROSSWORD SETTER: John Farmer
THEME: Shows Up … each of today’s themed answers are in the down-direction, and contain a hidden word shown with the circled letters in my grid. That word is the name of a SHOW on television, and is written in the UP-direction:

2D. Bit of deception HOCUS POCUS (“Cops” shows up)
8D. Realization often preceded by “Whew!” IT WAS ALL A DREAM (“Dallas” shows up)
13D. Rodgers and Hart title lyric that precedes “I get no dizzy spells” THIS CAN’T BE LOVE (“CSI” shows up)
20D. James Brown memoir I FEEL GOOD (“Glee” shows up)
29D. One way to lighten the mood CRACK A JOKE (“Kojak” shows up)

Today’s Wiki-est, Amazonian Googlies
Across
5. Ophidian menace ASP
In the animal kingdom, the group of reptiles known as snakes (and snake-like lizards) are called “ophidians”. “Ophi” is the Greek word for “serpent”.

8. Brightness stats IQS
Although it is correct these days to say that the abbreviation IQ stands for “intelligence quotient”, the term was actually coined by German psychologist William Stern, so it actually is an abbreviation for the German “Intelligenz-Quotient”.

14. Frat letter RHO
Rho is the Greek letter that looks just like our Roman letter “p”.

15. Son of Akhenaten TUT
King Tut is a name commonly used for the Egyptian pharaoh Tutankhamen. Tutankhamen may not have been the most significant of the pharaohs historically, but he is the most famous today largely because of the discovery of his nearly intact tomb in 1922 by Howard Carter. Prior to this find, any Egyptian tombs uncovered by archaeologists had been ravaged by grave robbers. Tutankhamen’s magnificent burial mask is one of the most recognizable of all Egyptian artifacts.

17. Battle of Khafji conflict GULF WAR
The Gulf War was a response to Iraq’s invasion and annexation of Kuwait. The first major ground engagement of the conflict was the Battle Khafji. Saddam ordered his troops to invade Saudi Arabia from Kuwait, resulting in a brief Iraqi occupation of the Saudi city of Khafji. Coalition air and ground forces regained control of the city after just one night.

19. “Battle it out” quintet AEIOU
The phrase “battle it out” is unusual in that it contains the vowels AEIOU, all in alphabetical order.

20. Plasma particle ION
A plasma lamp is a light source that generates light by exciting a plasma inside a glass container, using radio waves to create the plasma of ionized particles.

21. Loafer’s lack LACE
The type of slip-on shoe called a “loafer” dates back to 1939. “Loafer” was originally a brand name introduced by the Fortnum and Mason’s store in London.

23. Pro shop supplies SHAFTS
A pro show might carry a supply of shafts for golf clubs.

27. Kool-Aid alternative HI-C
Hi-C orange drink was created in 1946, and introduced to the market in 1948, initially in the south of the country. The name Hi-C was chosen to emphasize the high vitamin C content in the drink, as it contained added ascorbic acid (vitamin C).

The drink we know today as Kool-Aid was invented by Edward Perkins and his wife, in Perkins’ mother’s kitchen in southwest Nebraska. Kool-Aid is now the Official Soft Drink of the state.

28. “__ Eterno”: 2004 sports documentary PELE
“Pelé Eterno” is Portuguese for “Pele Forever”, and is the title of a 2004 documentary about the Brazilian soccer star Pelé.

Pelé is the nickname of Edson de Nascimento, a soccer player who has used the name Pelé for most of his life. Pelé is now retired, and for my money was the world’s greatest ever player of the game. He is the only person to have been part of three World Cup winning squads, and is a national treasure in his native Brazil.

34. “Love in the Time of __”: García Márquez work CHOLERA
“Love in the Time of Cholera” (“El amor en los tiempos del cólera” in the original Spanish) is a 1985 novel by Colombian author Gabriel Garcia Márquez. The book was first published in English in 1988. A famous Hollywood movie version came out in 2007, although it was widely panned by the critics as a poor adaptation of a great novel.

41. Former car-financing org. GMAC
GMAC is short for General Motors Acceptance Corporation. General Motors has only a small stake in GMAC now, and indeed the name has been officially changed to Ally Bank. You and me, we are the biggest shareholders in GMAC/Ally today, since the US government gave the bank $12.5 billion to bail it out in 2008-2009.

45. Rooting sound OINK
The verb “to root” can be used for a pig’s action with the snout, turning objects over.

50. Sushi topper ROE
Sushi is a Japanese dish that has as its primary ingredient cooked, vinegared rice. The rice is usually topped with something, most often fish, and can be served in seaweed rolls. If you want raw fish by itself, then you have to order “sashimi”.

51. Mall draw SALE
Surprisingly, our word “mall”, meaning “shady walk” or “enclosed shopping space”, comes from the Italian for “mallet”. All of our shopping-style malls are named for “The Mall” in St. James’s Park in London. This tree-lined promenade was so called as it used to a famous spot to play the croquet-like game called “pall-mall”. The game derived its name from the Italian for ball (palla) and mallet “maglio”. The London thoroughfare called the Mall still exists, at one end of which is Buckingham Palace. Indeed, parallel to the Mall is a street called Pall Mall.

52. Sci-fi suffix -OID
The “-oid” suffix indicates “having a similar shape”, from the Greek “eidos” meaning “shape”. So, something described as ellipsoid resembles an ellipse, for example. The term “android” is often used to describe a robot, as the Greek prefix “andro-) translates as a “human”.

59. Brief facilities? LAV
Our word “lavatory” originally referred to a washbasin, and comes from the Latin “lavatorium”, a place for washing. In the 1600s a “lavatory” came to mean a washroom, and in the 1920s a toilet.

61. Early Alaskans ESKIMOS
Although still used in the US, the term “Eskimo” tends to be avoided in Canada and Greenland as there it is considered pejorative.

Down
1. The Police, most of the time TRIO
Apparently back in the seventies, the Police were briefly a four-member band.

2. Bit of deception HOCUS POCUS
There appears to be a lot of speculation about the origin of the magician’s phrase “hocus pocus”, but nothing stands out to me as being very clear.

3. A, in Argentina UNA
Argentina is the second largest country in South America (after Brazil), and geographically is the world’s largest Spanish-speaking nation. The name “Argentina” comes from the Latin “argentum”, the word for “silver”. It is thought that the name was given by the early Spanish and Portuguese conquerors who also named the Rio de la Plata (the “Silver River”). Those early explorers got hold of lots of silver objects that they found among the native population.

4. ISP option DSL
An Internet Service Provider (ISP) is just what the name indicates, a company that provides its customers with access to the Internet. One way that ISPs differentiate themselves from each other is in the way in which end users are connected to the ISP’s network. So, there are cable ISPs, DSL ISPs, dial-up ISPs and satellite ISPs.

5. Shoptalk ARGOT
“Argot” is a French term, the name given in the 17th century to “the jargon of the Paris underworld”. Nowadays argot is the set of idioms used by any particular group, the “lingo” of that group.

9. Charlatans QUACKS
A “quack” is a person who pretends to have knowledge that he or she does not in fact possess. The term especially applies to someone fraudulently pretending to have medical skills. Our modern word is an abbreviation of “quacksalver”, an archaic term with Dutch roots that translates as “haker of salve”, Back in the Middle Ages, quacksalvers would shout out (quack) as they sold their pseudo-medical wares.

13. Rodgers and Hart title lyric that precedes “I get no dizzy spells” THIS CAN’T BE LOVE
“This Can’t Be Love” is a 1938 show tune by from the musical “The Boys from Syracuse” by Rodgers and Hart.

The singer James Brown was often referred to as “The Godfather of Soul” and sometimes “Mr. Dynamite”. He was born in Barnwell, South Carolina and had a rough and impoverished upbringing. He lived for some years in his aunt’s house which she ran as a brothel, and when he was sixteen he was convicted of armed robbery and was sent to reform school. While in reform school he was noticed by the R&B star Bobby Byrd, who took him under his wing. Byrd helped secure the young man an early release, and thereafter Brown turned his energies to music.

35. Key of Dvorák’s “New World Symphony”: Abbr. E MIN
Antonín Dvořák was a composer from Czechoslovakia who spent three years working and composing in the United States. He was the director of the National Conservatory of Music of America in New York from 1892 to 1895. Certainly here in the US, Dvořák’s best known work is his Symphony No. 9, “From the New World”, which is often referred to as the “New World Symphony”.

38. They can’t be beaten NEMESES
Nemesis was a Greek goddess, the goddess of retribution. Her role was to make pay those individuals who were either haughty or arrogant. In modern parlance, one’s nemesis (plural “nemeses”) is one’s sworn enemy, often someone who is the exact opposite in character but someone who still shares some important characteristics. A nemesis is often someone one cannot seem to beat in competition.

40. Get Wired again RENEW
“Wired” is a technology-focused magazine published since 1993 by Condé Nast in San Francisco.

43. Fight in the sticks RASSLE
“Rassle” is a slang word for “wrestle”.

44. Fred Astaire, by birth OMAHAN
Fred Astaire’s real name was Frederick Austerlitz. Fred was from Omaha, Nebraska and before he made it big in movies, he was one half of a celebrated music hall act with his sister Adele. The pair were particularly successful in the UK, and Adele ended up marrying into nobility in England, taking the name Lady Charles Cavendish.

48. President François Hollande’s birthplace ROUEN
Rouen is the major city in Normandy in northern France. During the days of Norman Britain, Rouen was one of the capitals of the Anglo-Norman dynasties. Rouen was also where Joan of Arc was burned at the stake in 1431.

François Hollande was elected President of France in 2012. During the election cycle in 2011, Hollande had been trailing in the polls, behind front-runner Dominique Strauss-Kahn. Hollande took over the lead following Strauss-Kahn’s arrest on New York City on suspicion of sexual assault.

49. Whale relative HIPPO
The name “hippopotamus” comes from the Greek for “river horse”. Hippos are the third largest land mammals, after elephants and rhinos. The closest living relatives to hippos don’t even live on land. They are the whales and porpoises of the oceans.

54. Bulldog fans ELIS
The Yale Bulldogs are the athletic teams of Yale University. The Yale school mascot is “Handsome Dan”, the Yale bulldog.

57. Brother of Jack and Bobby TED
Ted Kennedy was the youngest boy in the family that included his older brothers: Joseph Jr. (killed in action in WWII), John (assassinated) and Robert (assassinated). Ted went into the US Senate in 1962 in a special election held after his brother became US President. He remained in the Senate until he passed away in 2009, making Ted Kennedy the fourth-longest-serving Senator in history.