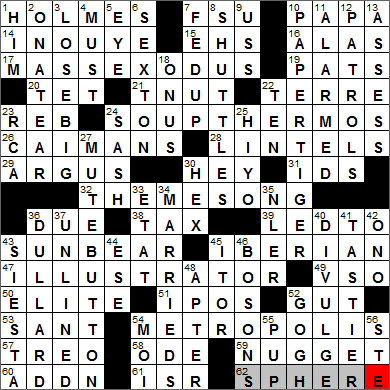 CROSSWORD SETTER: John Guzzetta
THEME: Atmosphere … each of the themed answers is hiding a prefix. When we add that prefix to SPHERE we come up with the five principal layers of the atmosphere, in order:

Today’s Wiki-est, Amazonian Googlies
Across
1. Elementary fellow? HOLMES
The celebrated phrase “Elementary, my dear Watson” has firmly established itself in our psyche it seems, and is a relatively common “quotation”. However, the line does not appear in any of the Sherlock Holmes stories by Sir Arthur Conan Doyle. That said, the line does appear in the 1929 screenplay for the film “The Return of Sherlock Holmes” starring Basil Rathbone in the title role.

7. Chief Osceola riding Renegade introduces its home games: Abbr. FSU
Florida State University (FSU) is located in Tallahassee, the state capital of Florida. The school’s athletic teams are known as the Seminoles (sometimes “the ‘Noles”). The team name was chosen in 1947 by the students in a vote, and alludes to the Seminole people who originally lived in the state. Most of the Seminole now live in Oklahoma, after their forced relocation by the US government in the 1840s.

Chief Osceola was a leader of the Seminole Native Americans in Florida who actively resisted the removal of his people from their lands during the Second Seminole War. Osceola was captured when he was tricked into entering a US fort for peace talks. He died in prison a few months later. The Florida State University Seminoles football team uses a student dressed as Chief Osceola on his horse Renegade as a mascot at their games. This practice, approved by the Seminole Tribe of Florida, involves Chief Osceola riding onto the field and planting a flaming spear at the 50-yard line.

17. *Large emigration MASS EXODUS (giving “exosphere”)
The exosphere is the outermost layer of the atmosphere, the layer where the atmosphere thins out and merges with interplanetary space. The exosphere lies just above the thermosphere layer below.

Orly is on the outskirts of Paris, to the south of the city. It is home of course to the Paris-Orly Airport, the second busiest international airport for the city after the more recently built Charles de Gaulle Airport. That said, Orly is home to more domestic flights than Charles de Gaulle.

28. Portal toppers LINTELS
A lintel is a structural beam that spans an opening in a wall, usually a door or a window.

29. 100-eyed giant of myth ARGUS
Argus Panoptes is a monster of Greek mythology. “Panoptes” means “all-seeing”, so over time Argus has been described as having many, many eyes. Argus was noted for being alert, always keeping some eyes open when sleeping. This characteristic led to Argus being used for a vigilant person, and has been adopted as the name for many newspapers. After Argus died, Hera transferred his eyes to the tail of the peacock.

32. *”I’ll Be There for You” on “Friends,” e.g. THEME SONG (giving “mesosphere”)
The mesosphere is a distinct layer of the atmosphere that extends from about 50 to 100 km above the Earth’s surface. The upper parts of the mesosphere can be the coldest place on the planet, with temperatures less than -140 degrees centigrade. The mesosphere is perhaps the least understood layer in the atmosphere as it lies above the maximum altitude for aircraft and below the minimum for orbital spacecraft.

The remarkably successful sitcom “Friends” was created by David Crane and Marta Kauffman. For the first season, the six lead characters were each paid $22,500 per episode. That salary had increased to $1 million per episode by the show’s last season.

45. Oporto native, e.g. IBERIAN
The Ebro is the longest river in Spain. The river was known by the Romans as the Iber, and it is the “Iber” river that gives the “Iberian” Peninsula its name.

The city of Oporto in Portugal gave its name to port wine in the late 1600s, as it was the seaport through which most of the region’s fortified wine was exported.

47. *Children’s literature VIP ILLUSTRATOR (giving “stratosphere”)
The stratosphere is a layer of the atmosphere that is so called because it is stratified in temperature, with the warmer layers at the top. One important constituent of the stratosphere is ozone. The ozone absorbs UV radiation coming from space, protecting us on the planet’s surface.

49. Brandy label letters VSO
Cognac is a famous variety of brandy named after the town of Cognac in the very west of France. To be called cognac, the brandy must be distilled twice in copper pot stills and aged at least two years in very specific French oak barrels. It is the length of this aging that defines the various grades of cognac (and other brandies):

51. CNBC topics IPOS
An Initial Public Offering (IPO) is the very first offer of stock for sale by a company on the open market. In other words, an IPO marks the first time that a company is traded on a public exchange. Companies have an IPO to raise capital to expand (usually).

CNBC is a business news channel owned by NBC. Launched in 1989, up until 1991 CNBC was known as the Consumer News and Business Channel.

54. *Daily Planet setting METROPOLIS (giving “troposphere”)
The troposphere is the lowest layer of the Earth’s atmosphere.

In the world of DC Comics, Metropolis is a city-state in America that is inspired by real-life New York City. Metropolis is home to Superman. The fictional city is nicknamed “the Big Apricot”.

57. Palm smartphone TREO
The Treo is a smartphone that was originally developed by a company called Handspring. Handspring was bought by Palm Inc. Subsequently, the Treo was phased out and replaced by the Palm Pre.

61. Beersheba’s land: Abbr. ISR
Beersheba is the largest city in the desert region in southern Israel called the Negev. Beersheba is home to many Jewish immigrants from the former Soviet Union, who brought with them many aspects of the culture of their former homeland. For example, the Beersheba now has more chess grandmasters per capita than any other city in the world.

6. Church maintenance officer SEXTON
A sexton is an officer in a church who looks after the building and perhaps an attached graveyard. The term “sexton” comes from the Medieval Latin word “sacristanus” which means “custodian of sacred objects”.

9. Navy hull letters USS
The acronym “USS” stands for “United States Ship”. The practice of naming US Navy vessels in a standard format didn’t start until 1907 when President Theodore Roosevelt issued an executive order that addressed the issue.

24. Window part SASH
A movable (up and down) window frame is called a sash, from the French word for a frame “châssis”.

25. Silver opening? HI-YO
“The Lone Ranger” was both a radio and television show, dating back to its first radio performance in 1933 on a Detroit station. The line “Hi-yo, Silver! Away!” was a device used in the storyline to signal that a riding sequence was starting, so cue the music!

30. Spell HEX
“Hexen” is a German word meaning “to practice witchcraft”. The use of the word “hex” in English started with the Pennsylvania Dutch in the early 1800s.

35. Cub or Card NLER
The Chicago Cubs is one of only two charter members of the baseball’s National League who are still playing, the other being the Atlanta Braves. The Cubs last won the World Series in 1908, which is a long time ago. In fact, the Cubs have the longest championship drought of any professional sports team in North America.

The St. Louis Cardinals were originally called the “Brown Stockings”, changing their name to the “Perfectos” in 1899. The new name obviously didn’t go down well with the locals, as the owners changed it one year later to the Cardinals.

46. Quantum gravity particles BOSONS
Particle physics is beyond me, but bosons are subatomic particles. They can be elementary, like for example photons, or composite, like mesons, which are composed of one quark and one antiquark.

52. Painter van __ GOGH
Vincent Van Gogh was a Dutch post-impressionist painter who seems to have had a very tortured existence. Van Gogh only painted for the last ten years of his life, and enjoyed very little celebrity while alive. Today many of his works are easily recognized, and fetch staggering sums in auction houses. Van Gogh suffered from severe depression for many of his final years. When he was only 37, he walked into a field with a revolver and shot himself in the chest. He managed to drag himself back to the inn where he was staying but died there two days later.