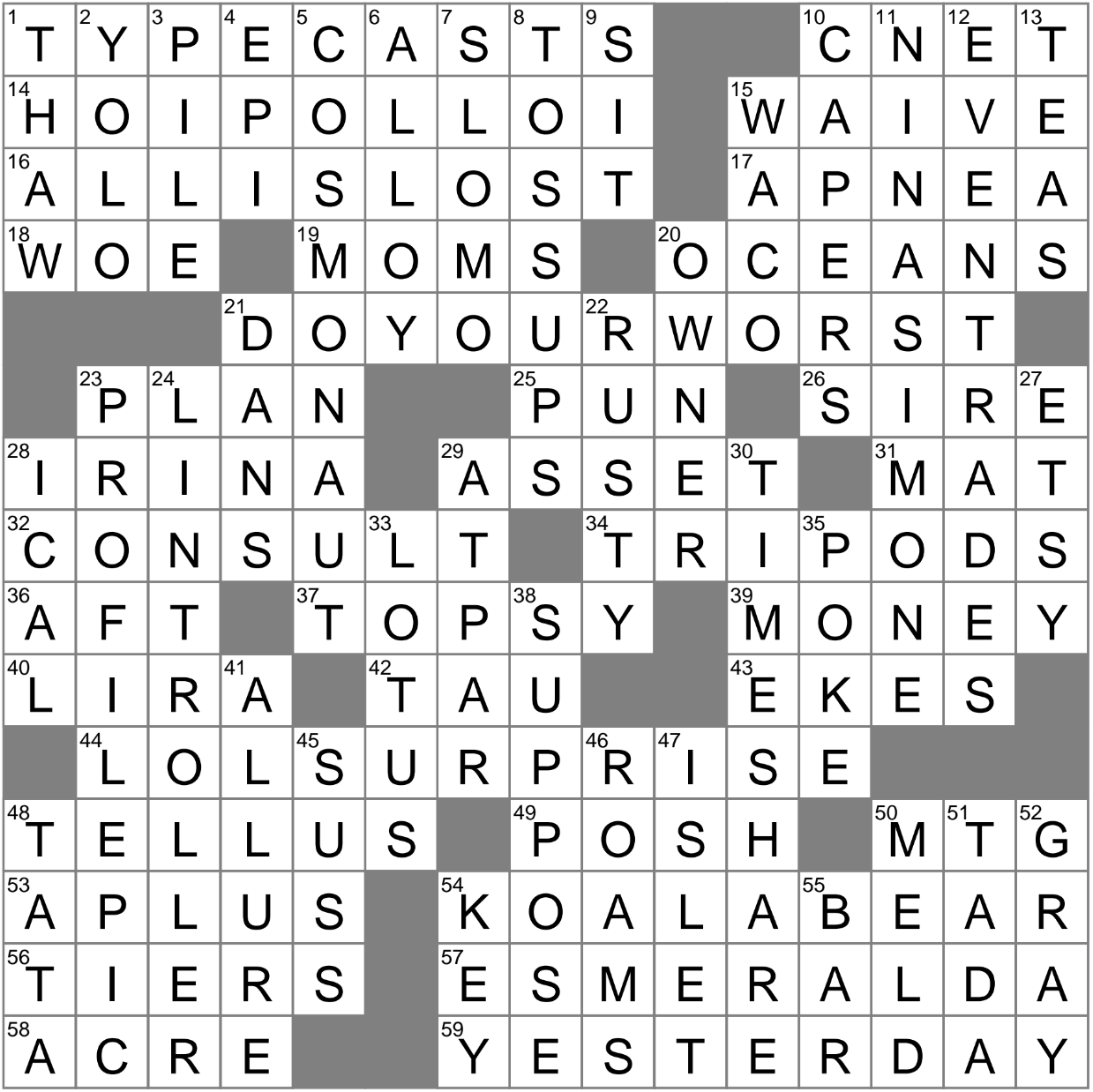 c|net is an excellent technology website. It started out in 1994 as a television network specializing in technology news. The host of “American Idol”, Ryan Seacrest, started off his career as host of a c|net show.

“Ocean’s 11” is a great film from 1960, starring Frank Sinatra as Danny Ocean. The original storyline is updated for the excellent 2001 remake, with George Clooney playing the lead. In the 1960 movie, the love interest is a character called Beatrice Ocean, played by Angie Dickinson. In the 2001 version, the love interest gets a new name, Tess Ocean, and is played by Julia Roberts. The 2001 remake (titled “Ocean’s Eleven”, note the spelling) spawned two sequels: “Ocean’s Twelve” in 2004 and “Ocean’s Thirteen” in 2007.

28 Chess player Krush who is the only American woman Grandmaster : IRINA

Irina Krush is a Ukrainian-born American chess Grandmaster. She started playing chess when she was five years old, just before she emigrated to the US with her family. In 1998, Krush became the youngest winner of the US Women’s Chess Championship, at age 14.

34 Stands to take a picture? : TRIPODS

A tripod is a three-legged stand that provides stable support for an object, often for a camera. A bipod is a similar two-legged support. Bipods are commonly used to support and steady rifles and automatic weapons. A monopod is a single-legged support. Sports photographers often use a monopod under a long, telephoto lens to reduce camera shake while allowing relatively free movement to capture the action.

The leading letter in the word “Trojan” is a letter T, equivalent to tau in the Greek alphabet.

44 Doll featured in many unboxing videos on YouTube : LOL SURPRISE!

L.O.L. Surprise! Is a line of toy dolls that was introduced in 2016. The toy’s “gimmick/draw” is that it comes in many, many layers of packaging, all housed in a hollow, plastic ball. Apparently, kids love the challenge of the extended unwrapping and eventual discovery of the doll within. Videos of kids unwrapping L.O.L. Surprise! dolls are very, very popular on YouTube.

Eucalyptus (plural “eucalypti”) is a genus of flowering trees and shrubs that is particularly widespread in Australia. The species known as mountain ash or swamp gum is the tallest flowering plant in the world, with the tallest example located in Tasmania and standing at over 325 feet tall.

The title character in Victor Hugo’s novel “The Hunchback of Notre-Dame” is Quasimodo, the hunch-backed bell-ringer . Quasimodo falls for the beautiful Roma girl Esmeralda, and eventually rescues her just before she is due to be hanged. He carries Esmeralda into Notre-Dame crying out “Sanctuary!” There is some recent evidence that a hunchbacked stone carver, working at Notre-Dame at the same time Hugo was alive, may have been the inspiration for Quasimodo the bell-ringer.

59 Film starring Himesh Patel as the only person in the world who remembers the Beatles : YESTERDAY

“Yesterday” is a 2019 musical film written by Richard Curtis and directed by Danny Boyle. Star of the movie is English actor Himesh Patel. He plays a struggling musician who wakes up one morning in a world where he is the only person who has heard of the Beatles. Patel starts recording all the Beatles hits, taking credit for writing them. I love this film, and think it is a must-see movie for fans of the Beatles …

Epiphenomenalism is a doctrine holding that physical events in the body are the sole cause of mental events. For example, this doctrine would explain the elevated heartbeat experienced in a fight-or-flight event as the result of biochemical secretions from the brain and nervous system, rather than the experience of fear or excitement.

5 Explorer trained at the Gagarin Center in Star City : COSMONAUT

Russian cosmonaut Yuri Gagarin became the first man in space when his spacecraft Vostok I made a single orbit of the Earth in 1961. Sadly, Gagarin died only seven years later in a plane crash.

“Star City” is the name given to the area surrounding and including the Yuri Gagarin Cosmonaut Training Center (GCTC) in Russia. It is located just 20 km north of Moscow. During the Soviet Era, Star City was treated as a top-secret military installation. Since the Apollo-Soyuz Project of the mid-seventies, NASA has had access to at least parts of the facility, and has housing there for American astronauts.

The dish named “piccata” originated in Italy, with the traditional meat used being veal. Whatever meat used is sliced and flattened with a tenderizer, seasoned, dredged in flour and browned in a pan. The juices from the pan are the base for the sauce, to which are added lemon juice, white wine, shallots, capers and butter.

The name for the Chinese tea called “oolong” translates into English as “black dragon” or “dark dragon”.

Pu’er (also “pu-erh”) is a fermented tea associated with the Yunnan Province in southwest China. A fermented tea (or “dark tea”) is one that has undergone controlled microbial fermentation after the leaves have been dried and rolled, in order to achieve a desired flavor.

15 Home of the Baylor Bears : WACO

Baylor is a private Baptist university in Waco, Texas that was founded in 1845, making it the oldest continuously-operating university in the state. Baylor is named for US Congressman and Baptist minister Robert Emmett Bledsoe Baylor, who co-founded the school. The list of Baylor’s past presidents includes Ken Starr, the independent counsel whose investigation led to the impeachment of President Bill Clinton.

Judo is a martial art from Japan that developed relatively recently, in 1882. The name “judo” translates as “gentle way”. Practitioners of judo proceed through a series of proficiency grades known as the kyu-dan system. At each progression, a different colored belt is awarded.

“Lint”, meaning “fluff”, is one of those terms that I had to learn when I moved to the US. We call the same thing “fuzz” on the other side of the Atlantic.

Apple’s personal calendar app is known as “Calendar”. It runs on both the macOS desktop and iOS mobile operating systems. Prior to 2012, the mac version of the app went by the name “iCal”.

Stocks and other financial vehicles may be sold “at par”, meaning at the original price, neither discounted nor at a premium.

35 Dish whose name means “to slice” in Hawaiian : POKE

Seeing as I’m one of three brothers, I have a favorite “So a guy walks into a bar” joke:

So a guy walks into a bar and orders three beers.

The bartender brings him the three beers, and the man proceeds to alternately sip one, then the other, then the third, until they’re gone. He then orders three more and the bartender says, “Sir, I know you like them cold, so you can start with one, and I’ll bring you a fresh one as soon as you’re low.” The man says, “You don’t understand. I have two brothers, one in Australia and one in Ireland. We made a vow to each other that every Saturday night, we’d still drink together. So right now, my brothers have three beers, too, and we’re drinking together.” The bartender thinks it’s a wonderful tradition, and every week he sets up the guy’s three beers. Then one week, the man comes in and orders only two. He drinks them and then orders two more. The bartender says sadly, “Knowing your tradition, I’d just like to just say that I’m sorry you’ve lost a brother.”

The man replies, “Oh, my brothers are fine — I just quit drinking.”