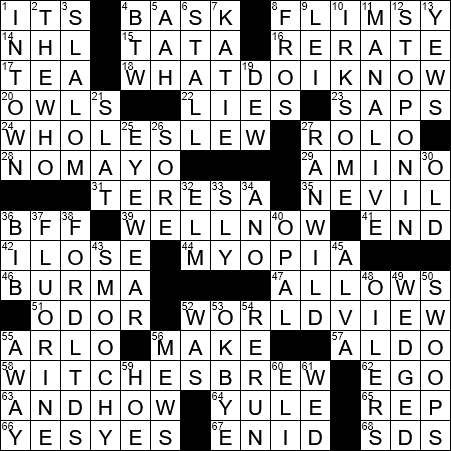 Themed answers have letters W at either end, at either EDGE:

The National Hockey League’s Stanley Cup is named for Lord Stanley of Preston, the Governor General of Canada from 1888 to 1893. Lord Stanley’s sons became avid fans of ice hockey while in Canada, and so he donated the trophy in 1909. It was originally a challenge cup for the country’s best amateur club.

The Hellmann’s brand of mayonnaise was developed by New York City delicatessen owner Richard Hellmann in 1905. The product is sold under the Hellmann’s label east of the Rockies, and under the Best Foods brand in the western US.

Mother Teresa was born in 1910 in the city that is now called Skopje, the capital of Macedonia. At birth she was given the names Agnes Gonxha Bojaxhiu (“Gonxha” means “little flower” in Albanian). She left home at the age of 18 and joined the Sisters of Loreto, and headed to Loreto Abbey in Rathfarnham in Dublin, Ireland in order to learn English. Her goal was to teach in India, and English was the language used there for instruction by the nuns. After Mother Teresa passed away in 1997 she was beatified by Pope John Paul II, a step on the road to canonization. In order for her to be beatified there had to be documented evidence of a miracle that was performed due to her intercession. The miracle in question was the healing of a tumor in the abdomen of a woman due to the application of a locket containing a picture of Mother Teresa. Documentation of a second miracle is required for her to be declared a saint. The canonization process seems to well underway, with Pope Francis recognizing a second miracle in December 2015.

Kolkata (formerly Calcutta) is the capital of West Bengal, India. Kolkata grew up around a fort that the British built in the area in 1712. Prior to the arrival of the British, there were three villages at the site, one named Kalikata. Kalikata gave its name to the city that eventually developed. This was anglicized to “Calcutta” which became the official name for centuries, until it was changed back to Kolkata in 2001.

“Nevil Shute” was the pen name of English-Australian novelist Nevil Shute Norway. Several of Shute’s more famous novels have been adapted for the big screen, including “On the Beach”, “No Highway” and “A Town Like Alice”. I was a big fan of Nevil Shute novels in my younger days …

“On the Beach” is a wonderful novel by Nevil Shute that was first published in 1957. The famous story is about the ending of the human race as nuclear fallout spreads south from the northern hemisphere after WWIII. The novel was adapted into a great 1959 movie starring Gregory Peck, Ava Gardner and even Fred Astaire.

The Republic of the Union of Myanmar is the official name of the Asian country that some nations still recognize as the Union of Burma.

The number of seats in the US House of Representatives has been 435 since the year 1913, although there was a temporary increase to 437 seats at the time of the admission of Alaska and Hawaii to the Union. The number of representatives assigned to each state is proportional to that state’s population, except that each state is guaranteed a minimum of one delegate by the US Constitution.

“My Generation” is a 1965 song by the Who that is sometimes hailed as an anthem of the mod counterculture that was at its height in the mid-sixties. Reportedly, Pete Townshend was inspired to write the song after the Queen Mother had his 1935 Packard hearse towed off the street as she was offended by its presence as she drove through the neighborhood.

Katie Couric left NBC’s “The Today Show” in 2006 and took over as news anchor for “CBS Evening News”. In so doing she became the first solo female anchor of a broadcast network evening news program. Couric also has the honor of being the only person to guest-host on “The Tonight Show with Jay Leno”. In fact she “swapped jobs” on that particular day, and Leno filled in for Couric on “The Today Show”.

The family of trees known as yews propagate by producing a seed surrounded by soft, sweet and brightly colored aril. Birds eat the fruit and then disperse the seed in their droppings. The birds leave the seed undamaged, and so are unharmed by the potent poisons taxine and taxol that are found within the seed. The seeds are highly toxic to humans.

The word “bib” comes from the Latin “bibere” meaning “to drink”, as does our word “imbibe”. So, maybe it’s less about spilling the food, and more about soaking up the booze …

When the incredibly successful sitcom “Friends” was in development it was given a working title “Insomnia Cafe”. This was changed to “Friends Like Us”, before final going to air as “Friends”.