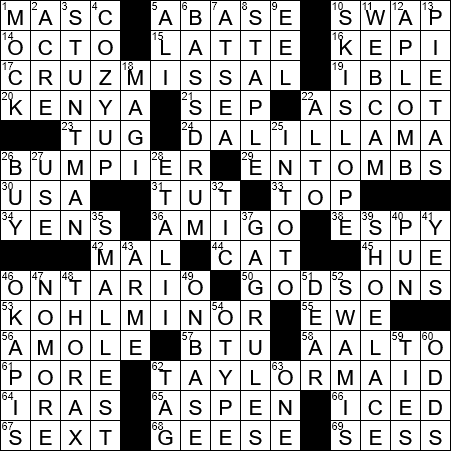 Today’s Theme (according to Bill): Sounds Like a Celeb’s

Themed answers sound like well-known phrases. However, they are actually items belonging to some famous people:

In French, “le” is the definite article used with masculine nouns.

A kepi is that circular cap with a visor that’s worn in particular by the French military.

US Senator Ted Cruz served as Solicitor General for the state of Texas before heading to Washington. Cruz was appointed Solicitor General in 2003 at the age of 32, making him the youngest Solicitor General in the country. Famously, Cruz is an opponent of the Affordable Care Act and made a speech in 2013 in the US Senate on the subject that lasted for 21 hours and 19 minutes. It was the fourth longest speech in the history of the Senate.

Missals came into being in medieval times and were used primarily by priests and ministers. A missal is a book containing all the texts necessary for the celebration of Mass through the liturgical year. Nowadays missals are used by the congregation and not just by the celebrants. The term “missal” comes from the Latin for “Mass book”.

Amboseli National Park straddles the Kenya-Tanzania border and covers just over 150 square miles. Reputedly, Amboseli is the best place in the world to get a close-up look at roaming elephants.

The last few weeks of the baseball season are known as “a pennant race”. Before 1969, the term was perhaps more apt, as the pennant winner (league champion) would be the team with the best win-loss record at the end of the season. Starting in 1969, when both the National and American Leagues formally split into East and West divisions, the pennant has been awarded to the winner of a best-of-five series of games played by the division winners each October. The pennant winners then go on to the best-of-seven World Series, also played in October.

The artist Salvador Dalí liked to make a splash in public. He was known to walk an anteater on a lead around Paris. He also brought an anteater on stage to an interview on “The Dick Cavett Show” in 1970.

Many female mammals lick off their newborn. That’s not an option for llamas as their tongues only reach out of their mouths about half an inch. Instead, llama dams nuzzle their young and hum to them.

John Dos Passos was an American novelist and artist who perhaps best known for his “USA” trilogy of novels:

“Top Cat” is one of the first cartoon shows that I remember watching regularly. It was a Hanna-Barbera production that had an original run from 1961 to 1962, in which 30 episodes were made. Top Cat is the leader of a gang of alley cats in Manhattan, New York. The gang frequently came up against NYPD police officer Charlie Dibble, my favorite character in the show.

Baptism is a rite in Christian traditions admitting a candidate, often an infant, into the Church. The ceremony usually uses water as a sign of purification. Water may be poured on the head, or the candidate may be totally immersed in water.

53. Underage child of a German chancellor? : KOHL MINOR (from “coalminer”)

Alvar Aalto was a Finnish architect and designer. He did most of his work in the first half of the twentieth century, and earned himself the nickname of “Father of Modernism” in Finland and the rest of the Nordic countries.

62. Household help for a 19th-century president? : TAYLOR MAID (from “tailor-made”)

Zachary Taylor won the 1848 election to become the 12th US president, and the first president to hold office without a political resume. Taylor was a career military man, known as “Old Rough and Ready” Taylor. He died only 16 months into his term, apparently of gastroenteritis. Given that rumors of poisoning persisted over the decades, his body was exhumed in 1991 and tissue samples were checked for signs of foul play. Nothing out of order was discovered, although rumours still persist.

Acre is a port city in northern Israel, on Haifa Bay.

“When We Were Kings” is a documentary by Leon Gast that was released in 1996. It tells of the “Rumble in the Jumble” world heavyweight title fight between Muhammad Ali and George Foreman that took place in Zaire. That’s the fight with the famous “rope-a-dope” tactic that tired out Foreman, and perhaps launched his new career selling grills …

The Pietà is a representation of the Virgin Mary holding in her arms the dead body of her son Jesus. The most famous Pietà is probably the sculpted rendition by Michelangelo which is located in St. Peter’s Basilica in Vatican City. In some depictions, Mary and her son are surrounded by other figures from the New Testament, and these depictions are known as Lamentations.

In the Christian tradition, a nativity scene (also “crèche”) is a display of representing the the scene of the birth of Jesus. Nativity scenes might be subjects for paintings, for example, although the term is usually used for seasonal displays associated with the Christmas season.

A glee club is a choir group, usually of males, that sings short songs known as “glees”. A glee is a song scored for three or more voices that is performed unaccompanied.

A tic is a twitching of a muscle, usually a facial muscle.

In a legislative body, for example, a “gag rule” prohibits the tabling or discussion of a particular topic.

48. Middle section of an insect : THORAX