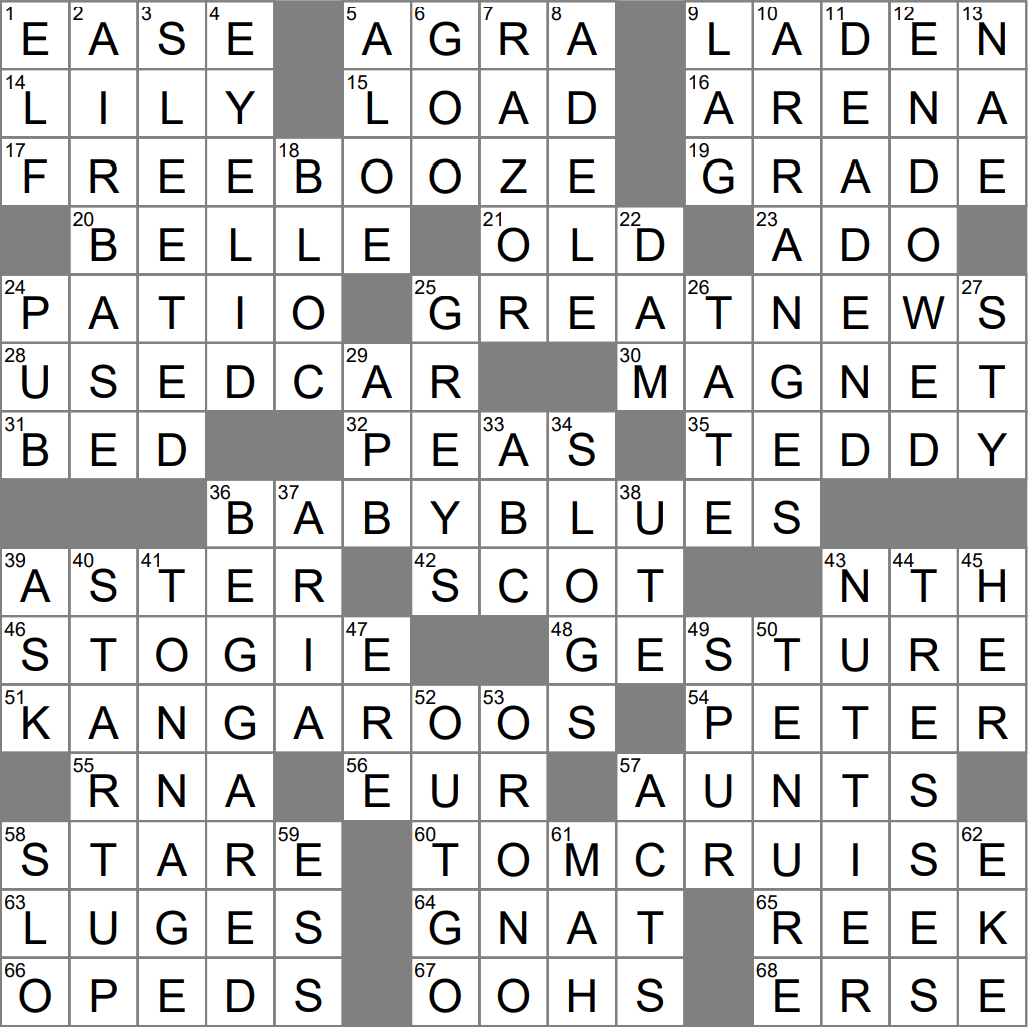 Themed answers are exclamations, and each ends with an “OOHS” sound:

There are many plants with the word “lily” in their common name, but few belong to the genus “Lilium”, the so-called “true” lilies. So, water lilies, calla lilies, lilies of the valley, etc.; they aren’t lilies at all.

20 “Beauty and the Beast” heroine : BELLE

Refrigerator magnets … I can’t stand them! But, there is something interesting about their structure. If we place two fridge magnets back to back, and slide them slowly against each other, then we can feel an alternating attraction and repulsion. This is because they are manufactured with alternating north and south poles on the back side, and do not have two distinct poles. Who knew …?!

Paul Newman was an actor from Shaker Heights, Ohio. Newman won his only Best Actor Oscar for his role in “The Color of Money”, a Martin Scorsese film. Off screen Newman was a very successful racing driver and won several national championships. He also founded a food company called Newman’s Own which donates its profits to charity, an amount that now exceeds $500 million.

Glasgow is the largest city in Scotland and sits on the River Clyde. Back in the Victorian Era, Glasgow earned a reputation for excellence in shipbuilding and was known as “Second City of the British Empire”. Glasgow shipyards were the birthplaces of such famous vessels as the Lusitania, the Queen Mary and the Queen Elizabeth. People from Glasgow are known as Glaswegians.

A stogie (also “stogy”) is both a rough, heavy shoe, and a long, cheap cigar. Both items were favored by the drivers of the covered wagons called Conestogas that wended their way across the Midwest in days gone by. The term “stogie” is derived from the name of the wagon, which itself is named after the area in which the wagons were built, i.e. Conestoga, near Lancaster, Pennsylvania.

51 *”Check out those Outback hoppers!” : KANGAROOS!

Scottish actor Peter Capaldi might be best known in North America for portraying the title character in the iconic sci-fi series “Doctor Who” from 2013-2017. He is also known for playing the foul-talking Malcom Tucker on “The Thick of It”, the British sitcom that was remade in the US as “Veep”. Fans of the 1983 movie “Local Hero” might remember a very young Capaldi as the naive local oil company representative in Scotland. Great film …

Tom Cruise’s real name is Tom Cruise Mapother IV. He was born in Syracuse, New York. That’s one of my favorite cities in the US, because it’s where I met my lovely wife-to-be …

1 Figure on the shelf, in Christmas decor : ELF

The measure of weight that we know as a ton was originally the quantity of wine needed to fill a cask (“tun”) with wine.

I think my favorite candy growing up was an Almond Joy, although in my part of the world it was a little different formulation and was called a Bounty Bar (and was more like a Mounds bar). The Almond Joy bar has been around since 1946. Hershey’s used a famous jingle in a seventies ad campaign for the Mounds and Almond Joy:

Mahjong (also “mahjongg” and “mah-jongg”) is the Chinese word for “sparrow”. Mahjong is a game that originated in China, and is usually played by four players. There is a myth that the game was developed by the Chinese philosopher, Confucius. The myth also suggests that Confucius was fond of birds, and hence chose the name “sparrow”.