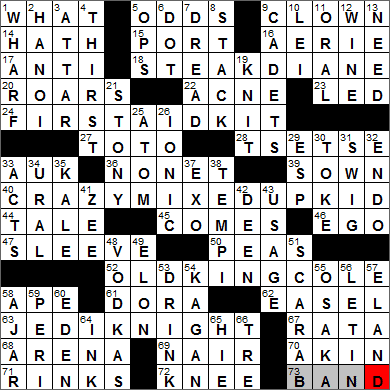 40A. Troubled youth literally hiding in each answer to a starred clue CRAZY, MIXED-UP KID

Today’s Wiki-est, Amazonian Googlies
Across
5. Handicapper’s concern ODDS
The noun “handicap”, an advantage or disadvantage in a competition, comes from the phrase “hand-in-cap”, the name of an Old English trading game. In the game, two players agree to trade two possessions. The players and a referee all put some forfeit money into a cap, forming a kitty that can be won. The referee determines the value of the items and declares any difference in worth, an amount that has to added by the owner of the lower-valued item so that the trade is “equal”. The players then put their hands into their pockets and draw out a token coin(s) at the same time, signalling that they agree with the valuation given. If agreement is reached, the referee collects the forfeit as a “fee” and the items are exchanged. If neither player agrees with the valuation they withdraw empty hands from their pockets, then the referee collects the fee and no exchange is made. If only one player agrees to the exchange, then that player collects the forfeit, and again no exchange is made.

18. *Filet mignon dish named for a goddess STEAK DIANE
Steak Diane is pan-fried filet mignon served in a flambéed sauce made from the juices in the pan along with butter, shallots, cream and brandy. The dish is named after Diana, the Roman goddess of the hunt.

22. Proactiv target ACNE
Proactiv is an over-the-counter medication that is applied to acne. Proactiv’s active ingredient is benzoyl peroxide.

23. Was in the vanguard LED
The term “vanguard” comes to us from French, and describes the foremost position in an advancing army or navy. The term derives from “avant-garde” meaning “advance guard”.

27. Dog in Baum stories TOTO
Toto is Dorothy’s dog in the film “The Wizard of Oz”. Toto was played by a dog called Terry, but Terry’s name was soon changed to Toto in real life, due to the success of the film.

L. Frank Baum (the “L” is for Lyman) is of course famous for writing “The Wonderful Wizard of Oz”. Writing early in the 20th century, Baum actually described in his books things that had yet to be invented, like television, laptop computers and wireless telephones.

28. Dangerous fly TSETSE
Tsetse flies live on the blood of vertebrate mammals. The name “tsetse” comes from Tswana, a language of southern Africa, and translates simply as “fly”. Tsetse flies are famous for being carriers of the disease known as “sleeping sickness”. Sleeping sickness is caused by a parasite which is passed onto humans when the tsetse fly bites into human skin tissue. If one considers all the diseases transmitted by the insect, then the tsetse fly is responsible for a staggering quarter of a million deaths each year.

46. I trouble? EGO
Sigmund Freud created a structural model of the human psyche, breaking it into three parts: the id, the ego, and the super-ego. The id is that part of the psyche containing the basic instinctual drives. The ego seeks to please the id by causing realistic behavior that benefits the individual. The super-ego almost has a parental role, contradicting the id by introducing critical thinking and morals to behavioral choices.

50. Spheres studied by Mendel PEAS
Gregor Mendel was an Austrian monk, and a scientist who achieved fame after his passing when his work in the field of genetics was rediscovered. The conclusions he drew from his studies of garden peas led to him earning the moniker “father of modern genetics”.

61. Explorer on Nick Jr. DORA
“Dora the Explorer” is a cartoon series shown on Nickelodeon. Part of Dora’s remit is to introduce the show’s young viewers to some Spanish words and phrases.

62. Art support EASEL
The word “easel” comes from an old Dutch word meaning “donkey” would you believe? The idea is that an easel carries its load (an oil painting, say) just as a donkey would carry its load.

63. *Fictional rank above Padawan JEDI KNIGHT
In the “Star Wars” universe, the members of the Jedi Order progress through six ranks:

69. Former Neet rival NAIR
Nair is a hair removal product that has some pretty harsh ingredients. The most important active constituents are calcium hydroxide (“slake lime”) and sodium hydroxide (“caustic soda”). Other Nair components seem to be there to soothe the skin after the harsher chemicals have done their job. The name “Nair” probably comes from combining “no” and “hair”.

The hair removal product “Neet” was launched in Canada in 1901, and was also sold as “Immac”. Today it is sold under the name “Veet”.

71. Face-off locales RINKS
A “face-off” is a technique used to start or restart play in a number of sports. The idea is that one player from each team faces the other and the ball or puck is dropped between them so that they can contest for possession.

73. Wings, for instance BAND
Wings is a rock band that Paul and LInda McCartney formed after the Beatles disbanded. Wings had some tremendous hits including “Live and Let Die”, “Jet”, “Band on the Run” and “Mull of Kintyre”.

Down
2. Ho Chi Minh Mausoleum city HANOI
The Ho Chi Minh Mausoleum is a huge memorial to the former Vietnamese leader that is located at the center of Ba Dinh Square in Hanoi. The mausoleum’s design was inspired by Lenin’s Tomb in Red Square Moscow. Ho Chi Minh’s embalmed body is on display in a central hall in a glass case and visitors file past it every day to pay their respects.

3. Rose essence ATTAR
Attar is a fragrant essential oil obtained from flowers, and the term may particularly refer to attar of roses.

6. Hi and Lois’s daughter DOT
“Hi and Lois” is a comic strop that first appeared in 1954 and is still running today. The strip was created by Mort Walker (also known for “Beetle Bailey”) and was originally illustrated by Dik Browne (also known for “Hägar the Horrible”). The title characters Hi and Lois Flagstone first appeared in “Beetle Bailey”. Lois is Beetle’s sister, and the characters occasionally show up in each other’s strip.

12. Riesling product WINE
The Riesling grape variety originated in the Rhine region of Germany, and is used to make wines that are often described as fruity and aromatic. The wine generally has a high level of acidity which makes it ideal for aging, with some examples being proclaimed as excellent at over a hundred-years-old.

26. Column style IONIC
An Ionic column is relatively ornate. It usually has grooves running up and down its length and at the top there is a “scroll” design called a “volute”. The scroll motif makes Ionic columns popular for the design of academic buildings. The term “Ionic” means “pertaining to Ionia”, with Ionia being an ancient territory that is located in modern-day Turkey.

30. Tip for a croupier TOKE
“Toke” is an informal term for a tip given to a dealer or other employee at a casino.

A croupier is someone who conducts a game at a gambling table. In the world of gaming, the original croupier was someone who stood behind a gambler, holding reserves of cash for the person in a game. Before that, “croupier” was someone who rode behind the main rider on a horse. “Croup” was a Germanic word for “rump”. So, a croupier used to be a “second”, as it were.

33. Book after John ACTS
The Acts of the Apostles is the fifth book of the New Testament. It is believed that the author of the Gospel of Luke was the same person who wrote “Acts”.

34. River through Orsk URAL
The Ural River rises in the Ural Mountains in Russia and flows for half its length through Russian territory until it crosses the border into Kazakhstan, finally emptying into the Caspian Sea.

The city of Orsk is located about 60 miles southeast of the southern tip of the Ural Mountains in Russia. The city lies on the Ural River, which forms the boundary between Europe and Asia. As a result, Orsk can be considered as lying in two continents. Orsk also lies where the Or River joins the Ural, and so the Or gives the city its name.

38. Metronome settings TEMPI
A metronome is any device that produces a regular beat. The metronome was invented in 1815 by Johann Maelzel, who intended it to be an instrument for the use of musicians.

41. Prize component? ZEE
One component of the word “prize” is the letter Z (zee).

42. “The Lady & Sons Savannah Country Cookbook” author Paula DEEN
Paula Deen is a celebrity chef from Savannah, Georgia who is noted for her Southern cooking. Deen has been criticized for the amount of salt, fat and sugar in her recipes. The criticism became even more intense when Deen disclosed that she herself has been diagnosed with Type 2 diabetes.

43. Stylebook subject USAGE
A “style manual” is a favorite reference book of mine, one that sets the standards for writing and design of documents. That said, it’s sad how often I have to refer to “The Chicago Manual of Style”.

48. Stoli and SKYY VODKAS
Stolichnaya is a brand of Russian vodka made from wheat and rye grain. Well, “Stoli” originated in Russia but now it’s made in Latvia, which is of course a completely different country, so you won’t see the word “Russian” on the label.

49. Tar Heel State campus ELON
Elon is a city in the Piedmont region of North Carolina, close to the city of Burlington. Elon University is a private liberal arts school founded in 1889.

51. Egyptian amulet SCARAB
Scarabs were amulets in ancient Egypt. Scarabs were modelled on the dung beetle, as it was viewed as a symbol of the cycle of life.

54. 2010 Supreme Court appointee KAGAN
Elena Kagan was the Solicitor General of the United States who replaced Justice John Paul Stevens on the US Supreme Court. That made Justice Kagan the fourth female US Supreme Court justice (there have been 108 men!). I hear she is a fan of Jane Austen, and used to reread “Pride and Prejudice” once a year. Not a bad thing to do, I’d say …

55. Honshu port OSAKA
The Japanese city of Osaka used to be called Naniwa, with the name changing to Osaka some time before 1500. “Osaka” can be translated either as “large hill” or “large slope”.

57. Twisty-horned antelope ELAND
An eland is a large African antelope, in fact the largest on the continent.

58. Admitting a breeze, perhaps AJAR
Our word “ajar” is thought to come from Scottish dialect, in which “a char” means “slightly open”.

60. Shangri-la EDEN
Shangri-La is the earthly paradise in the mountains of Tibet described by James Hilton in his novel “Lost Horizon”. It is “Edenic” (perfect, like the Garden of Eden from the Book of Genesis). Frank Capra directed a wonderful screen adaptation of “lost Horizon” in 1937 starring Ronald Colman.