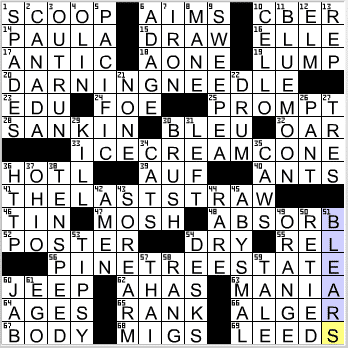 Today’s Wiki-est, Amazonian Googlies
Across
10. Trucker on a radio : CBER
A CBer is someone who operates a Citizens’ Band radio. In 1945, the FCC set aside certain radio frequencies for the personal use of citizens. The use of the Citizens’ Band increased throughout the seventies as advances in electronics brought down the size of transceivers and their cost. There aren’t many CB radios sold these days though, as they have largely been replaced by cell phones.

14. Former “Idol” judge Abdul : PAULA
Paula Abdul is primarily a singer and dancer, and someone who endeared herself even more to the American public in recent years as a judge on “American Idol”. She had a famous husband for a couple of years, as she was married to actor Emilio Estevez from 1992-94.

16. Cosmo competitor : ELLE
“Elle” magazine was founded in 1945 in France and today has the highest circulation of any fashion magazine in the world. “Elle” is the French word for “she”.

“Cosmopolitan” magazine was first published way back in 1886! It started out life as a family magazine, then as a literary publication. “Cosmo” took its present form as a women’s magazine in the sixties.

17. Marx Brothers shenanigan : ANTIC
The five Marx Brothers were born to “Minnie” and “Frenchy” Marx in New York City. The more famous older boys were Chico, Harpo and Groucho. Zeppo was the youngest brother, and he appeared in the early Marx Brothers movies. The fifth son was called Gummo, and he decided to pursue a different career off the stage.

30. __ cheese dressing : BLEU
Being a bit of a French speaker (admittedly a pretty poor one), the term “bleu” cheese has always kind of irritated me. I would prefer that we use either “blue cheese” or “fromage bleu” and not mix the languages, but then I can be annoyingly picky! It’s said that blue cheese was probably discovered accidentally, as molds tend to develop in the same conditions that are best for storing cheese. The blue mold in the cheese is introduced by adding Penicillium spores before the cheese is allowed to set. And yes, it’s the same mold that is used to produce penicillin, the antibiotic.

32. Dinghy mover : OAR
Our word “dinghy” comes from the Hindi “dingi”, the word for a small boat.

33. Dairy Queen order : ICE CREAM CONE
Soft serve ice cream was developed by John McCullough in 1938. McCullough was able to get his new dessert carried by a local ice cream store in Illinois. He and the store owner became so swamped with sales that they opened a store specifically built around the product in Joliet, Illinois, hence creating the first Dairy Queen outlet. There are now over 5,700 Dairy Queen franchises in 19 countries. We’ve even got one in Ireland …

36. “The __ Baltimore”: Lanford Wilson play : HOT L
“The Hot l Baltimore” is a play by Lanford Wilson about the manager and residents of a dilapidated hotel in Baltimore. The play’s name comes from the establishment’s neon sign which is meant to read “Hotel Baltimore”, but the burnt out “e” was never replaced.

39. “__ Wiedersehen” : AUF
“Auf Wiedersehen” is German for “goodbye”, literally translating as “till we see each other again”.

41. Proverbial backbreaker : THE LAST STRAW
We use the idiom “the straw that broke the camel’s back” to refer to an seemingly inconsequential action that can cause a cataclysmic failure given the pressure on the situation that already exists. Our English idiom comes from an Arabic proverb with a similar wording and meaning.

46. Main element in pewter : TIN
Pewter is a relatively soft alloy that is made up mostly of tin, with some copper, antimony, bismuth and lead.

47. Dance in a pit : MOSH
Moshing (also “slam dancing”) is the pushing and shoving that takes place in the audience at a concert (usually a punk or heavy metal concert). The area directly in front of the stage is known as the mosh pit. When a performer does a “stage dive” it is into (or I suppose “onto”) the mosh pit. It doesn’t sound like fun to me. Injuries are common in the mosh pit, and deaths are not unknown.

54. Martini order : DRY
The name “martini” probably takes it name from the “Martini & Rossi” brand of dry vermouth, although no one seems to be completely sure. What is clear is that despite the Martini name originating in Italy, the martini drink originated in the US. The original martini was made with gin and sweet vermouth, but someone specifying a “dry” martini was given gin and dry vermouth. Nowadays we use dry vermouth for all martinis and the term “dry” has become a reference to how little vermouth is included in the drink. Famously, Noel Coward liked his drink very dry and said that a perfect martini is made by “filling a glass with gin then waving it in the general direction of Italy”.

56. Maine’s nickname, and a hint to the ends of 20-, 33- and 41-Across : PINE TREE STATE
Maine is the least densely populated state located east of the Mississippi, and almost 90% of its land is covered with forests. Perhaps that’s why the state’s nickname is “The Pine Tree State” …

60. Army vehicle : JEEP
The Jeep is the original off-road vehicle. It was developed by the American Bantam Car Company in 1940 at the request of the US government who recognized the upcoming need for the armed forces as American involvement in WWII loomed. The Bantam Company was too small to cope with demand, so the government gave the designs to competing car companies. The design and brand eventually ended up with AMC in the seventies and eighties.

66. Rags-to-riches author Horatio : ALGER
Horatio Alger was an American writer of the late nineteenth century. Alger was a prolific writer of novels for young people and creates tales of poor children making it good in the world, achieving the American dream as it were.

I went to school for a while not far from Leeds in West Yorkshire in the north of England. Prior to the Industrial Revolution, Leeds was a major center for the production and trading of wool, and then with the onset of mechanization it became a natural hub for manufacture of textiles. These days Leeds is noted as a shopping destination and so has been dubbed “the Knightsbridge of the North”.

Down
2. Ottawa’s country : CANADA
Ottawa is the second largest city in the Province of Ontario (after Toronto) and is the capital city of Canada. The name “Ottawa” comes from an Algonquin word “adawe” which means “to trade”.

“thirtysomething” is a television drama that follows the lives of a group of baby boomers who have reached their late thirties. The show originally aired for four season on ABC from 1987 to 1991. The show was so successful that in 1993, the Oxford English Dictionary included the word “Thirtysomething” in its list of definitions.

5. World’s largest ocean : PACIFIC
The Pacific Ocean was given its name by the Portuguese explorer Ferdinand Magellan. When Magellan sailed into the ocean on his 1521 circumnavigation of the globe, he encountered favorable winds and so called it “Mar Pacifico” meaning “peaceful sea”.

7. Golfer’s selection : IRON
Most of the irons in a golf bag had non-numerical names in days gone by:

9. Popeye’s kid : SWEE’PEA
Originally Popeye used the nickname “swee’pea” to address his girlfriend Olive Oyl. Then along comes a baby, found on Popeye’s doorstep. Popeye adopts the little guy and raises him, calling him “Swee’Pea”.

10. Violin cousin : CELLO
The word “cello” is an abbreviation for “violoncello”, an Italian word for “little violone”, referring to a group of stringed instruments that were popular up to the end of the 17th century. The name violoncello persisted for the instrument that we know today, although the abbreviation ‘cello was often used. Nowadays we just drop the apostrophe.

11. Song title words before “You saw me standing alone” : BLUE MOON
“Blue Moon” is a song by Richard Rodgers and Lorenz Hart that they write in 1934. The original version of the song was written as the title song for the 1934 movie “Manhattan Melodrama”. However, the song was cut from the film, was reworked and published in 1935 with a new title “Blue Moon”. The most successful recording was in 1961 by the Marcels, when it hit the number one spot in the American and British charts.

12. Horror film street : ELM
“A Nightmare on Elm Street” is a Wes Craven slasher-horror film, released in 1984. As I don’t do “slasher” nor “horror” I only learned recently that Johnny Depp was in the movie, making his feature film debut.

34. Sylvester and Garfield : CATS
Sylvester J, Pussycat was also known as Puddy Tat, and was a character who appeared in “Looney Tunes” and “Merrie Melodies” cartoons. Sylvester was the cat who was often trying to get the better of Tweety Bird, Speedy Gonzales or Hippety Hopper.

“Garfield” is a comic strip drawn by Jim Davis since 1978. Garfield is an orange tabby cat. Davis named his hero Garfield after his own grandfather.

35. Cornfield cries : CAWS
A caw is the harsh cry of a crow, and crows might be found in fields of corn …

37. Cincinnati’s home : OHIO
Cincinnati, Ohio was the first major city to be founded after the American Revolution, and indeed was the first major inland city to be founded in the whole country. Cincinnati was a boomtown in the 1800s, but it’s growth slowed as the the railroads displaced the steamboats as the major form of transportation. The city was founded in 1788, and was named “Cincinnati” two years later. It was named for the Society of Cincinnati, an organization with the mission to preserve the ideals and fellowship of the officers of Revolutionary War. The society was in turn named for Lucius Quinctius Cincinnatus. cincinnatus was farmer in ancient Rome who left his land to serve as Consul and then lawful dictator of Rome during a war emergency, before happily handing back power to the Senate after the war was won.

42. Church agreement : AMEN
The word “amen” is translated as “so be it”. “Amen” is said to be of Hebrew origin, but it is likely to be also influenced by Aramaic and Arabic.

51. Dims with tears, as one’s vision : BLEARS
“To blear” is to dim the vision, usually with watery eyes.

59. “A __ of Two Cities” : TALE
“A Tale of Two Cities” by Charles Dickens is the most printed book that was originally written in English. The “two cities” referred to in the title are of course London and Paris.