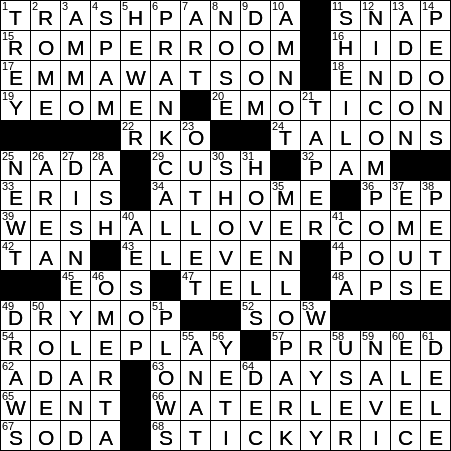 “Romper Room” is a television show for children that targets preschoolers. The show’s original run in the US lasted from 1953 to 1994.

Emma Watson is the English actress famous for playing Hermione Granger in the “Harry Potter” series of movies. Watson continued her education while pursuing her acting career and studied at Brown University in Providence, Rhode Island.

When RKO released the 1933 movie “King Kong”, the promotional material listed the ape’s height as 50 feet. During filming, a bust was created for a 40-foot ape, as well as a full-size hand that went with a 70-foot Kong.

“Squat” is a slang word meaning “nothing”, and is a term that probably has a distasteful derivation related to a bodily function.

Our term “cushy”, meaning “easy and profitable”, is actually Anglo-Indian slang coming from the Hindi word “khush”, which translates as “pleasant, happy”.

PAM cooking oil was introduced in 1961 by Leon Rubin and Arthur Meyerhoff. The name “PAM” is an acronym … standing for “Product of Arthur Meyerhoff”. Who’d a thunk it …?

The exact origins of the protest song titles “We Shall Overcome” is a little unclear. Some say that it is based on an early gospel song “I’ll Overcome Someday”, but there doesn’t seem to be much similarity between the two works beyond the titles. Early performers of the song who helped to popularize its use were Pete Seeger and Joan Baez.

That would be a pair of ones.

Sticky rice is actually a type of rice, and not a means of preparation. Sticky rice is more usually called “glutinous rice”, even though it does not contain dietary gluten.

Lazio is one 20 administrative regions that cover Italy. Lazio is in the center of the country on the west coast, and is home to the capital city of Rome.

10 Rebuttal during recess : AM NOT!

“Sheila” is a 1962 song that was written and recorded by Tommy Roe. Roe composed the song using the name and title “Frita”, inspired by a student at Roe’s high school. The record’s producer requested a change of name, and Roe came up with “Sheila”. That name was inspired by Roe’s Aunt Sheila, who happened to be visiting him at the time.

The word “nincompoop”, meaning a fool, seems to have been around for quite a while. It has been used since the 1670s, but no one appears to know its origins.

The garter snake is found right across the continent, It is in fact the most widely distributed genus of reptile in North America, being found anywhere from the Southeast Alaska to Central America.

New Orleans Square is a themed area in Disneyland that opened for business in 1966 and is modeled on the city of New Orleans in Louisiana. If you slip down to the telegraph office beside the New Orleans Square train station, you can hear some Morse code. The message being sent comprises some lines spoken by Walt Disney when he dedicated Disneyland in 1955:

TO ALL WHO COME TO DISNEYLAND, WELCOME. HERE AGE RELIVES FOND MEMORIES OF THE PAST, AND HERE YOUTH MAY SAVOR THE CHALLENGE AND PROMISE OF THE FUTURE.

The township of Edison, New Jersey was established as Raritan Township in 1870, but changed its name to Edison in 1954. That change was in honor of inventor Thomas Edison who worked in the Menlo Park section of the township. The motto appearing on the town seal is “Let There be Light”.

Novelist and screenwriter Mario Puzo, was best known for his book “The Godfather”, which he also co-adapted for the big screen. Puzo also wrote two sequels, “The Last Don” and “Omertà”, the latter being published after his death. His name is less associated with some very famous screenplays that he wrote, including “Earthquake”, “Superman” and “Superman II”. Puzo won two Oscars for Best Adapted Screenplay: for “The Godfather” (1972) and for “The Godfather Part II” (1974).

“Rodeo” is a ballet with a score by Aaron Copland that was originally choreographed by Agnes de Mille. First performed in 1942, “Rodeo” is one of the earliest examples of a truly American classical ballet.

A veterinarian (vet) is a professional who treat animals for disease and injury. The word “veterinary” comes from the Latin “veterinae” meaning “working animals, beasts of burden”.

YETI is a manufacturer of coolers and related products, and is based in Austin, Texas. There was a kerfuffle between YETI and the National Rifle Association in 2018, when YETI removed the NRA from its membership discount program. That kerfuffle got quite public when some NRA members published video of themselves destroying their own YETI products in protest.

In James Cameron’s epic “Avatar”, the “blue people” are the Na’vi, the indigenous species that lives on the lush moon called Pandora. The main Na’vi character featuring in the film is the female Neytiri. According to Cameron, Neytiri was inspired by the character played by Raquel Welch in the movie “Fantastic Voyage” and the comic book character Vampirella.

2009’s epic “Avatar” is a science fiction film from James Cameron, who was the director, writer and producer. It was an expensive movie to make and to promote, but was destined to become the highest-grossing film in the history of cinema. 20th Century Fox made a deal with Cameron to produce three “Avatar” sequels.