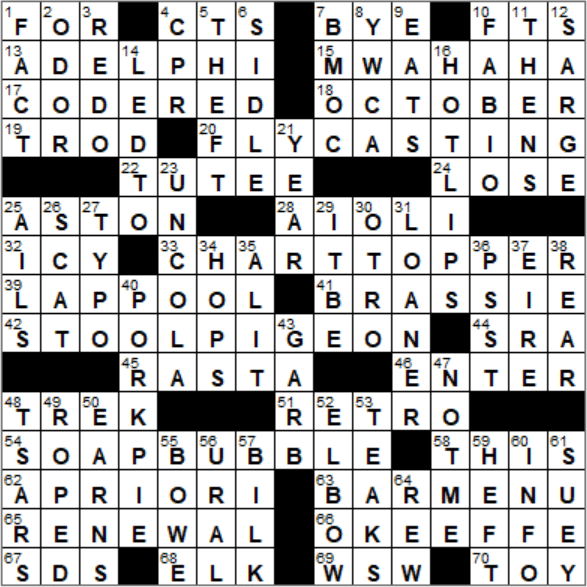 The official name of our smallest denomination coin is a “cent”, and our use of the word “penny” is just a colloquialism derived from the British coin of the same name. In the UK, the plural of penny is “pence”, whereas we have “pennies” in our pockets.

Adelphi University is located in Garden City, New York on Long Island. The university started out as Adelphi Academy in Brooklyn in 1863. By 1929, the academy had moved to Garden City and was a woman’s college. Adelphi reverted to co-education after WWII when it admitted many students under the GI Bill.

18. Month that once was eighth : OCTOBER

Aston Martin is a British car manufacturer, founded in 1913 by Lionel Martin. The Aston part of the company name comes from Aston Hill, a famous site for hill-climbing cars that is nearby the original factory. Aston Martin cars are much loved by the British entertainment industry. James Bond was given one in “Goldfinger”, and Michael Caine drove one in the 1969 version of “The Italian Job”. Also, Roger Moore’s character drove a yellow Aston Martin in the seventies television show “The Persuaders!”.

In golf, a No. 2 wood is sometimes referred to a a “brassie”, which is the old traditional name for the club. The old name is a reference to a brass soleplate that lowered the center of gravity of the club’s head.

62. Existing independent of experience, in logic : A PRIORI

Georgia O’Keeffe was an influential American artist, one who led the introduction of American art into Europe. Famously, she was married to photographer Alfred Stieglitz who helped develop her career in the early days. Georgia O’Keeffe’s last home was in Santa Fe, New Mexico, where she had done a lot of her work during her lifetime. She died there in 1986, at the ripe old age of 98. One of her most famous paintings is from 1926, called “Black Iris III”.

“Canyon With Crows” is a 1917 watercolor by artist Georgia O’Keeffe. It is part of a series of paintings that O’Keeffe made of Palo Duro Canyon which she taught at West Texas State Normal College between 1916 and 1918.

7UP was introduced to the world as “Bib-Label Lithiated Lemon-Lime Soda”, and was a patent medicine that contained lithium citrate, a mood-stabilizing drug. Paradoxically, it came on the market in 1929 just two weeks before the Wall Street Crash. 7UP’s “Uncola” advertising campaign dates back to 1967.

“Let It Be” was the last album that the Beatles released as an active group playing together. The title song “Let It Be” was written by Paul McCartney, and it is clearly one of his own favorites. McCartney says that he was inspired to write the song after having had a dream about his mother (who had died some years earlier from cancer). In fact he refers to her (Mary McCartney) in the line “Mother Mary comes to me”. Paul’s first wife, Linda, is singing backing vocals on the song, the only time she is known to have done so in a Beatles recording. 18 years after that 1970 recording was made, Paul, George and Ringo sang “Let It Be” at a memorial service for Linda, who was also lost to cancer. Sad stuff, but a lovely song …

Oaxaca (officially “Oaxaca de Juárez”) is the capital city of the Mexican state of Oaxaca, located in the south of the country.

The pork pie hat originated in the mid-1800s. It is round, usually made of felt, and has a flat top. When first introduced it was a woman’s hat, but then men grabbed hold of it …

Buster Keaton was a comic actor who was most famous for his work during the silent era. Keaton starred in and co-directed the 1926 silent comedy “The General”, lauded by some as the greatest movie of all time.

48. Nicholas II was the last of them in Russia : TSARS

“Dogie” is cowboy slang for a motherless calf in a herd.

Teak is a hardwood tree in the mint family, commonly found in monsoon forests of Asia. Teak’s tight grain and high oil content make it very suitable for constructing outdoor furniture, where weather resistance is valued. For the same reason, teak is the wood of choice for wooden decks on boats.

Riddick Bowe is a former professional boxer from Brooklyn, New York. Bowe was Undisputed Heavyweight Champion of the World in 1992. A few years later Bowe retired from boxing to join the US Marines. However, after just 11 days of basic training Bowe asked to quit, and the Marine Corps came into a lot of criticism for acceding to his request.

56. It borders Siberia in the game of Risk : URAL

Many believe that the Chinese dish known as chop suey was invented in America, by Chinese immigrants. In fact, by the time it showed up in the US it already existed in the Taishan district of Guangdong in southeast China, the origin of many of those immigrants. “Chop suey” translates as “assorted pieces”, and is made up of some meat and eggs quickly cooked with vegetables in a thickened sauce.