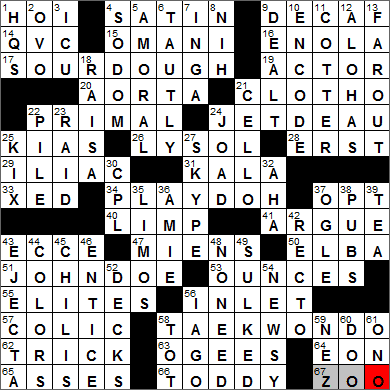 Today’s Wiki-est, Amazonian Googlies
Across
1. __ polloi HOI
“Hoi polloi” is a Greek term, literally meaning “the majority, the many”. In English, “hoi polloi” has come to mean “the masses” and is often used in a derogatory sense.

4. Prom gown material SATIN
A prom is a formal dance held upon graduation from high school (we call them “formals” over in Ireland). The term “prom” is short for “promenade”, the name given to a type of dance or ball.

9. Jitter-free java DECAF
Back in 1850, the name “java” was given to a type of coffee grown on the island of Java, and the usage of the term spread from there.

14. ShopNBC competitor QVC
The QVC shopping channel was founded in 1986 in West Chester, Pennsylvania. The company now has operations not only in the US but also in the UK, Germany, Japan and Italy. That means QVC is reaching 200 million households. The QVC acronym stands for Quality, Value and Convenience.

15. Gulf State native OMANI
Oman lies on the southeast coast of the Arabian Peninsula and is neighbored by the OAE, Saudi Arabia and Yemen.

19. Obie contender ACTOR
The Obies are the “Off-Broadway Theater Awards”. The Obies are presented annually and the recipients are chosen by “The Village Voice” newspaper.

21. Fate who spins the thread of life CLOTHO
The three Fates of Greek mythology were white-robed deities, and were also called the Moirai. The three Fates were Clotho the spinner, Lachesis the allotter and Atropos the unturnable.

24. Lake Geneva water fountain JET D’EAU
The “Jet d’Eau” (“Water-Jet” in English) is the famous fountain that spurts a tall jet of water out of Lake Geneva, just beside the city of Geneva itself. The fountain was inspired by a nearby jet of water that acted as a safety valve for a hydraulic power network. The more functional jet came to be regarded as a thing of beauty, and so the purely decorative “Jet d’Eau” was designed and installed in 1951.

26. Maker of Touch of Foam hand wash LYSOL
The disinfectant called Lysol takes its name from the words “lysosome” and “solvent”. Lysosomes are structures found within cells that have the job of breaking up waste material and cellular debris.

29. Hipbone-related ILIAC
The sacrum and the two ilia are three bones in the human pelvis.

31. Ape who rescues baby Tarzan KALA
Kala is the fictional ape that rescues the infant Tarzan from the dangerous leader of the apes. In the Edgar Rice Burroughs novel, Kala is killed a few years later by a hunter, for which Tarzan exacts the ultimate revenge. In the 1999 Disney adaptation of the story, Kala doesn’t die.

34. Fun Factory clay PLAY-DOH
Back in the 1930s, a manufacturer in Cincinnati produced a doughy compound that was used to clean wallpaper. Twenty years later, school-kids started using the cleaning material as a modelling compound, so the manufacturer reworked the formula, and sold it to local schools. It was given the name Play-Doh.

50. Napoleon’s exile isle ELBA
I had a lovely two-week vacation in Tuscany once, including what was supposed to be a two-night stay on the island of Elba. I had envisioned Elba as a place full of history, and maybe it is, but it is also overrun with tourists who use it as a beach getaway. We left after one day and we won’t be going back again …

51. Mystery man JOHN DOE
Though the English court system does not use the term today, “John Doe” first appeared as the “name of a person unknown” in England in 1659, along with another unknown referred to as Richard Roe. Joe Blow is just a variant of John Doe, and Jane Doe is an unknown female.

56. Firth or fjord INLET
“Firth” is a word used in England and Scotland for an inlet, and tends to be used in the same way as “fjord” in Scandinavia.

57. Infant ailment COLIC
Baby colic is a condition in which a baby cries for no apparent reason for extended periods. At least one study has shown that breastfed babies are about half as likely to suffer from colic.

63. S-shaped moldings OGEES
An ogee is like an s-curve. Specifically it is a figure consisting of two arcs that curve in opposite directions (like an S) but both ends of the curve end up parallel to each other (which is not necessarily true for an S).

66. Hot, spicy drink TODDY
The word “toddy” has come a long way. Its origins lie in the Hindi word for a palm tree, which is “tar”. The derivative word “tari” was used for palm sap, which came into English as “tarrie”, then “taddy” and “toddy”, all of which described an alcoholic drink made from fermented palm sap. That was back around 1600. Late in the 18th century, the palm sap drink called “toddy” had morphed into meaning any alcoholic drink made with liquor, hot water, sugar and spices.

4. Doomed city in Genesis SODOM
The two cities of Sodom and Gomorrah, as well as Admah and Zeboim, were destroyed by God for the sins of their inhabitants, according to the Bible. The name Sodom has become a metaphor for vice and homosexuality, and gives us our word “sodomy”.

7. “Young Frankenstein” seductress INGA
I am not really a big fan of movies made by Mel Brooks, but “Young Frankenstein” is the exception. I think the cast has a lot to do with me liking the film, as it includes Gene Wilder (Dr. Frankenstein), Teri Garr (Inga), Marty Feldman (Igor) and Gene Hackman (Harold, the blind man).

12. Lei Day greetings ALOHAS
What’s known as May Day around the world is also called Lei Day in Hawaii. Lei Day started in the twenties and is a celebration of native Hawaiian culture.

18. __ Gorbachev, last first lady of the USSR RAISA
Raisa Gorbachova was the wife of Soviet leader Mikhail Gorbachev. There’s no doubt that Raisa’s charm and personality helped her husband as he worked to change the image of the Soviet Union.

27. Video chat choice SKYPE
The main feature of the Skype application is that it allows voice communication to take place over the Internet (aka VoIP). Skype has other features such as video conferencing and instant messaging, but the application made its name from voice communication. Skype was founded by two Scandinavian entrepreneurs and the software necessary was developed by a team of engineers in Estonia. The development project was originally called “Sky peer-to-peer” so the first commercial name for the application was “Skyper”. This had to be shortened to “Skype” because the skyper.com domain name was already in use.

35. Long rides? LIMOS
The word “limousine” actually derives from the French city of Limoges. The area around Limoges is called the Limousin, and it gave its name to a cloak hood worn by local shepherds. In early motor cars, a driver would sit outside in the weather while the passengers would sit in the covered compartment. The driver would often wear a limousin-style protective hood, giving rise to that type of transportation being called a “limousine”. Well, that’s how the story goes anyway …

36. Jacques’s significant other AMIE
A male friend in France is “un ami”, and a female friend is “une amie”.

38. Guinness servers PUBS
Guinness is the most popular beer sold in Ireland. The beer is a stout and has that famous creamy white head, a result of mixing the beer with nitrogen as it is poured. You can also buy Guinness that has no nitrogen, which is sold in bottles bearing the the name Guinness Export. This carbonated version of the beer has a very different taste, and is my personal favorite.

42. Right-hand page RECTO
The left and right pages of a book or magazine are known in publishing circles as verso and recto. Recto comes from the Latin for “right”, and verso comes from the Latin word for “turned”. The idea is that the left side of the page is “turned” and is the reverse of the right side.

56. “I hate the Moor” speaker IAGO
Iago is the schemer in Shakespeare’s “Othello”. Iago is a soldier who fought alongside Othello and feels hard done by, missing out on promotion. He hatches a plot designed to discredit his rival Cassio by insinuating that Cassio is having an affair with Desdemona, Othello’s wife. By the end of the play it’s Iago himself who is discredited and Othello (before committing suicide) apologizes to Cassio for having believed Iago’s lies. Heavy stuff …

59. Pince-__ NEZ
Pince-nez are eyeglasses clipped to the bridge of the nose. “Pince-nez” is French, translating as “pinch the nose”.

60. Scrappy-__ DOO
Scrappy-Doo is a Great Dane puppy who appears in the “Scooby-Doo” series of cartoons.

61. Beatle wife ONO
John Lennon and Yoko Ono married at the height of the Vietnam War in 1969. The couple decided to use the inevitable publicity surrounding their wedding and honeymoon to promote peace in the world. They honeymooned in the Presidential Suite of the Amsterdam Hilton, inviting the world’s press to join them and to witness their “bed-in”. They spent the week talking about peace, and an end to war. The marriage and bed-in is chronicled by the Beatles in their song “The Ballad of John and Yoko”.