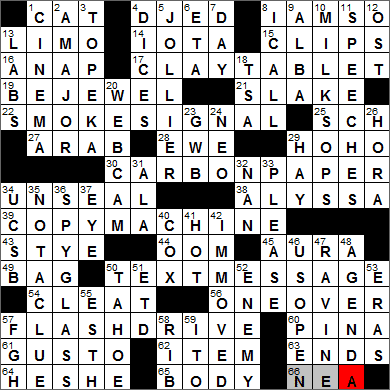 Today’s Wiki-est, Amazonian Googlies
Across
4. Spun some LPs DJED
The world’s first radio disk jockey was one Ray Newby of Stockton, California who made his debut broadcast in 1909, would you believe? When he was 16 years old and a student, Newby started to play his records on a primitive radio located in the Herrold College of Engineering and Wireless in San Jose. The records played back then were mostly recordings of Enrico Caruso.

13. Fancy ride LIMO
The word “limousine” actually derives from the French city of Limoges. The area around Limoges is called the Limousin, and it gave its name to a cloak hood worn by local shepherds. In early motor cars, a driver would sit outside in the weather while the passengers would sit in the covered compartment. The driver would often wear a limousin-style protective hood, giving rise to that type of transportation being called a “limousine”. Well, that’s how the story goes anyway …

14. Wee bit IOTA
Iota is the ninth letter in the Greek alphabet. We use the word “iota” to portray something very small as it is the smallest of all Greek letters.

21. Satisfy, as thirst SLAKE
“To slake” is to satisfy a craving, as in slaking one’s thirst.

27. Kaffiyeh wearer ARAB
The kaffiyeh is a traditional headdress worn by Arab men and some Kurds. The kaffiyeh is fashioned from a square scarf usually made from cotton. The headdress takes its name from the city of Kufa. Although it has been worn for over a century, the Kaffiyeh gained prominence when it was adopted by Palestinian leader Yasser Arafat.

29. Twinkie relative HO HO
Ho Hos snack cakes were first produced in San Francisco in 1967; not the best thing to come out of the sixties I’d say …

30. It used to duplicate information CARBON PAPER
I wonder do the kids of today know that “cc” stands for carbon copy, and do they have any idea what a carbon copy was? Do you remember how messy carbon paper was to handle?

38. Actress Milano ALYSSA
Alyssa Milano is an actress who started her career at a very young age. She played Samantha Micelli on “Who’s the Boss”, the daughter of the character played by Tony Danza.

54. Gridiron gripper CLEAT
We never used the word “gridiron” when I was growing up in Ireland (meaning a grill used for cooking food over an open fire). So, maybe I am excused for finding out relatively recently that a football field gridiron is so called because the layout of yard lines over the field looks like a gridiron used in cooking!

60. __ colada PINA
Piña colada is a Spanish term which translates into “strained pineapple”. The Piña colada cocktail was introduced in the Caribe Hilton San Juan in 1954, and since 1978 it has been the official beverage of Puerto Rico. Yum …

61. Hearty enjoyment GUSTO
“Gusto” is an Italian word meaning “taste”. We use it in the sense of “with gusto”, with great enjoyment.

Down
3. Capital north of Tulsa TOPEKA
Topeka is the capital Kansas, and is located on the Kansas River in the northeast of the state. The name “Topeka” was chosen in 1855 and translates from the Kansa and the Ioway languages as “to dig good potatoes”. The reference isn’t to the common potato but rather to the herb known as the prairie potato (also “prairie turnip”), which was an important food for many Native Americans.

6. Greek letter between zeta and theta ETA
Eta is the seventh letter of the Greek alphabet, and is a forerunner of our Latin character “H”.

The Greek letter theta is the one that looks like a number zero with a horizontal line in the middle.

8. Hold ’em declaration I CALL
The official birthplace of the incredibly popular poker game of Texas Hold ‘Em is Robstown, Texas where the game dates back to the early 1900s. The game was introduced into Las Vegas in 1967 by a group of Texan enthusiasts including Doyle Brunson, a champion often seen playing on TV today. Doyle Brunson published a poker strategy guide in 1978, and this really helped increase the popularity of the game. But it was the inclusion of Texas Hold ‘Em in the television line-up that really gave the game its explosive surge in popularity, with the size of the prize money just skyrocketing.

9. Actress Jessica ALBA
Actress Jessica Alba got her big break when she was cast in the Fox science fiction show “Dark Angel”. Alba had a tough life growing up as she spent a lot of time in hospital and so found it difficult to develop friendships. As a youngster she twice had a collapsed lung, frequently caught pneumonia, suffered from asthma, had a ruptured appendix and a tonsular cyst. On top of all that she acknowledges that she suffered from obsessive-compulsive disorder as a child. It seems that she has really turned her life around …

10. Wimps MILKSOPS
A “milksop” is a man lacking courage and other “manly” qualities. The term literally means “a piece of bread soaked in milk”.

The Labrador breed of dog has been around at least since 1814, and the chocolate Labrador appeared over a century later in the 1930s.

18. Fed. inspection agency TSA
The Transportation Security Administration (TSA) was of course created in 2001, soon after the 9/11 attacks.

President Obama’s first name, Barack, is Swahili with roots in an old Arabic word meaning “blessed”. Barack was the President’s father’s name. President Obama’s middle name is Hussein, an Arabic word meaning “good” or “handsome one”. Hussein was the name of the President’s grandfather on the paternal side. His surname, Obama, doesn’t really have a translation, but is a common name among the Luo tribe of Kenya.

24. Prefix with classic NEO-
Neoclassicism is a movement in the field of music, art or perhaps architecture, one that draws on the classical art of Ancient Greece or Ancient Rome.

26. Circle dance HORA
The hora (also “horah”) is a circle dance that originated in the Balkans. The hora was brought to Israel by Romanian settlers, and is often performed to traditional Israeli folk songs. The dance is a regular sight at Jewish weddings and at bar and bat mitzvahs. At such events, it is common for the honorees to be raised on chairs during the dance.

29. Filly’s dinner HAY
A filly is a young female horse.

32. Bert Bobbsey’s twin NAN
The “Bobbsey Twins” series of children’s novels was first written by Edward Stratemeyer in 1904. Stratemeyer used the pseudonym Laura Lee Hope, as did subsequent authors who wrote 72 books in the series between 1904 and 1979. The title characters were two sets of fraternal twins, one called Bert and Nan (who were 12) and the other called Flossie and Freddie (who were 6).

34. 25-Across WNW of L.A. UCSB
The University of California, Santa Barbara (UCSB) is one of the 10 campuses in the UC system. UCSB joined the UC system in 1944, although the school was founded as a teachers’ college in 1891.

40. Watergate prosecutor Archibald COX
Archibald Cox was the US Solicitor General in the Kennedy Administration. Cox was also appointed as the special prosecutor during the Watergate scandal, at the insistence of the US Senate. Cox was dismissed by order of President Nixon in an event now known as the Saturday Night Massacre. Attorney General Elliot Richardson refused to obey President Nixon’s order and resigned. Deputy Attorney General William Ruckelshaus then refused the order, and also resigned. It then fell to Solicitor General Robert Bork to dismiss Cox, and also to name Leon Jaworski as Cox’s replacement.

46. England’s Justin Rose won it in 2013 US OPEN
Justin Rose is a professional golfer from England, although he was actually born in South Africa. Justin Rose won the US Open in 2013, becoming the first Englishman to do so since Tony Jacklin in 1970.

48. Chair’s list AGENDA
“Agenda”is a Latin word that translates as “things to be done”, coming from the verb “agere” meaning “to do”.

50. Lake near Stateline, Nevada TAHOE
Lake Tahoe is up in the Sierra Nevada mountains, right on the border between California and Nevada. Lake Tahoe is the largest alpine lake in the country. It’s also the second deepest lake, with only the beautiful Crater Lake in Oregon being deeper. Given its location, there are tall casinos that sit right on the shore on the Nevada side of the state line where gambling is legal.

Stateline, Nevada sits right beside the town of South Lake Tahoe, California on the east shore of the lake and on the Nevada/California border. Stateline is home to several large casinos.

Henrik Ibsen was a Norwegian playwright, considered by many to be the greatest playwright since William Shakespeare. Ibsen was famous for shocking his audiences by exploring subjects that offended the sensibilities of the day (the late 1800s).

53. Stats that are better when they’re low ERAS
The baseball pitching stat earned run average (ERA) measures how many runs a pitcher tends to give up per nine innings.

55. O.T. queen ESTH
Esther was a Jewish queen, wife of the Persian king Ahasuerus, and the heroine of the Book of Esther in the Bible. By the way, Esther is the only book in the Bible that doesn’t mention “God”.

59. Simpson judge ITO
Judge Lance Ito came in for a lot of criticism for his handling of the O.J. Simpson murder trial. The lead prosecutor in that trial was Marcia Clark, you might recall. I read the book that’s Clark wrote about the trial called “Without a Doubt”, and she pointed out one trait of Judge Ito that I think is quite telling. Ito would almost always refer to the prosecutor as “Marcia”, while addressing the men on both sides of the case as “Mister”.