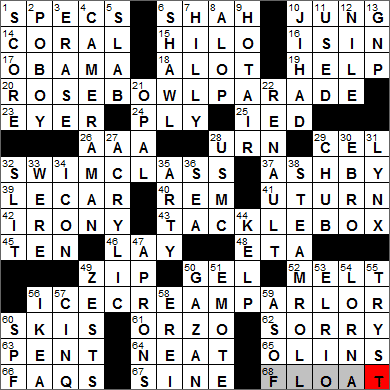 CROSSWORD SETTER: Jeff Hyson & Victor Barocas
THEME: Float with This … each of today’s themed answers are things associated with a FLOAT:

20A. New Year’s Day staple, familiarly ROSE BOWL PARADE
32A. Place to learn to crawl? SWIM CLASS
43A. It has a handle and flies TACKLE BOX
56A. Place to split a split ICE CREAM PARLOR

Today’s Wiki-est, Amazonian Googlies
Across
6. 1979 exile SHAH
The last Shah of Iran was Mohammed-Reza Shah Pahlavi, as he was overthrown in the revolution led by the Ayatollah Khomeini in 1979. The post-revolution government sought the extradition of the Shah back to Iran while he was in the United States seeking medical care (he had cancer). His prolonged stay in the United States, recovering from surgery, caused some unrest back in Iran and resentment towards the United States. Some say that this resentment precipitated the storming of the US Embassy in Tehran and the resulting hostage crisis.

10. “Collective unconscious” coiner JUNG
Carl Jung was a Swiss psychiatrist. Jung was very much associated with the analysis of dreams.

15. Big Island port HILO
Hilo is the largest settlement on the big island of Hawai’i, with a population of over 43,000 (that’s not very many!). I love the Big Island …

17. President who appointed Sotomayor to the Supreme Court OBAMA
In a 2001 speech addressing the need for stronger representation of the Hispanic community in the judiciary, Supreme Court Justice Sotomayor made the remark:

I would hope that a wise Latina woman, with the richness of her experiences, would more often than not reach a better conclusion than a white male who hasn’t lived that life.

That line raised a few eyebrows, and was a topic of some discussion during her confirmation hearing. Discuss …

19. Beatles movie HELP!
“Help!” is a 1965 movie, the second film released by the Beatles. Personally, I prefered teh Beatles’ first movie, “A Hard Day’s Night” …

20. New Year’s Day staple, familiarly ROSE BOWL PARADE
The Rose Bowl is the oldest of all the bowl games and so has the nickname “The Granddaddy of the Them All”. The first Rose Bowl game was played in 1902.

25. Mil. roadside hazard IED
Sadly, having spent much of my life in the border areas between southern and Northern Ireland, I am all too familiar with the devastating effects of Improvised Explosive Devices (IEDs). No matter what one’s politics, one has to admire the bravery of soldiers who spend their careers defusing (or attempting to defuse) such devices in order to save the lives and property of others. Of course these days, IEDs are very much in the news in Iraq and Afghanistan.

26. Highest of MLB’s “minors” AAA
A, AA and AAA are minor leagues in baseball.

29. Animation unit CEL
In the world of animation, a cel is a transparent sheet on which objects and characters are drawn. In the first half of the 20th century the sheet was actually made of celluloid, giving the “cel” its name.

“Harold and Maude” is a somewhat dark comedy film released in 1971. I found the storyline to be quite bizarre when I saw it many years ago, with a death-obsessed young man taken to driving a hearse as his private vehicle. The young man makes friends with a 79-year-old woman who, like him, is in the habit of attending the funerals of people she never knew. It’s not my cup of tea, quite frankly …

39. Aptly named 22-Down LE CAR
French automaker Renault made the “mini-like” Renault 5 and sold it as the Renault “Le Car” in North America. My Dad had a Renault 5 back in Ireland …

42. “The Wizard of Oz” device IRONY
The movie “The Wizard of Oz” is full of irony. The Scarecrow wants to be intelligent and discovers he is already very smart. The Tin Man wants to be able to love and finds out that he already has a heart. The Lion thinks he is a coward but turns out to be fearless. And the big reveal is that the Wizard of Oz, who is positioned as all-powerful, is actually just a bumbling and eccentric old man.

45. Comaneci score TEN
Nadia Comaneci won three golds in the 1976 Summer Olympics and was the first gymnast to be awarded a perfect score of a ten in the gymnastics competition. Comaneci published a book called “Letters to a Young Gymnast” in 2003, and now lives in the United States.

49. 90210, e.g. ZIP
ZIP codes were introduced in 1963. The acronym ZIP stands for Zone Improvement Plan, a name indicating that mail travels more efficiently when the codes are included in the postal address.

61. Ricelike pasta ORZO
Orzo is pasta that has been formed into granular shapes, much like barley. And indeed, “orzo” is the Italian word for “barley”.

65. Lena and others OLINS
The lovely Lena Olin is a Swedish actress, clearly someone who had acting in her blood. Her mother was the actress Britta Holmberg and her father the actor and director Stig Olin. Olin had a very successful career in Sweden, often working with the great Ingmar Bergman. Olin’s breakthrough international and English-speaking role was playing opposite Daniel Day-Lewis in “The Unbearable Lightness of Being” released in 1988. Way back in 1974, the lovely Miss Olin was crowned Miss Scandinavia in a beauty pageant for Nordic women held in Helsinki, Finland.

66. Surfers’ guides FAQS
Most websites have a page listing answers to Frequently Asked Questions (FAQ). There is a link to the LAXCrossword’s blog’s FAQs at the top right of every page.

67. __ qua non SINE
“Sine qua non” is a Latin phrase that we use to mean “the essential element or condition”. The literal translation is “without which not”. One might say, for example, “a challenging crossword is the sine qua non of a good newspaper”. Well, crossword fans might say that anyway …

Down
2. NOLA sandwich PO’ BOY
A po’ boy is a submarine sandwich from Louisiana. There are a lot of theories about where the name came from, and none sound too convincing to me. A po’ boy differs from a regular submarine sandwich in that it uses Louisiana French bread, which is soft in the middle and crusty on the outside.

7. Like links golf courses HILLY
The oldest type of golf course is a links course. The name “links” comes from the Old English word “hlinc” meaning “rising ground”. “Hlinc” was used to describe areas with coastal sand dunes or open parkland. As a result, we use the term “links course” to mean a golf course that is located at or on the coast, often amid sand dunes. The British Open is always played on a links course.

8. Crooked ALOP
I had to go to one of my two huge volumes of the OED to find the definition of “alop”. It means “lop-sided”. A lovely word, I think, but it’s amazing that it seems to have avoided the Internet!

9. Bloviator’s talk HOT AIR
“To bloviate” is such a descriptive term, meaning to discourse pompously. “Bloviate” is mock-Latin and derived from “blow”.

10. Muslim holy war JIHAD
In the Islamic tradition “jihad” is a duty, either an inner spiritual struggle to fulfill religious obligations or an outward physical struggle to defend the faith. Someone engaged in jihad is called a “mujahid” with the plural being “mujahideen”.

12. “Aida” backdrop NILE
“Aida” is the famous opera by Giuseppe Verdi, actually based on a scenario written by French Egyptologist Auguste Mariette, who also designed the costumes and stages for the opening performance. The opera was first performed in 1871 in an opera house in Cairo. In the storyline, Aida is an Ethiopian princess brought into Egypt as a slave. Radames is an Egyptian commander who falls in love with her, and then of course complications arise!

13. Macroeconomics fig. GNP
A country’s Gross National Product (GNP) is the value of all services and products produced by its residents in a particular year. GNP includes all production wherever it is in the world, as long as the business is owned by residents of the country concerned. Gross Domestic Product (GDP) is different, and is the value of all services and goods produced within the borders of the country for that year.

21. Gem for a Scorpio, perhaps OPAL
Here is the “official” list of birthstones by month, that we tend to use today:

22. 39-Across automaker RENAULT
Renault is a French automaker that was founded in 1899 by Louis Renault and his brothers. I’ve seen relatively few Renault cars here in North America, but have driven them many times in Europe, which is the company’s core market.

29. Carp family fish CHUB
There is a whole family of fish called “chubs” including European chubs, lake chubs, hornyhead chub, creek chubs, and a host of others.

30. Spanish Civil War battle site EBRO
The Ebro is the longest river in Spain. The river was known by the Romans as the Iber, and it is the “Iber” river that gives the “Iberian” Peninsula its name.

31. Snowshoe hare hunter LYNX
A lynx is a wild cat, of which there are four species. These are:

36. “Wide Sargasso __”: Jean Rhys novel SEA
“Wide Sargasso Sea” was written by Jean Rhys and first published in 1966. It’s a clever work, written as a sort of prequel to Charlotte Bronte’s famous “Jane Eyre”, which dates back to 1847.

50. Certain strip native GAZAN
After the 1948 Arab-Israeli War, the boundaries of the strip of land on the Mediterranean around Gaza were fixed in the Israel-Egypt Armistice Agreement. The boundaries were specifically defined but were not to be recognized as an international border. From 1948, the Gaza Strip was occupied and administered by Egypt, until 1967 when Israel took over occupation following the Six-Day War. In 1993, Israel and the PLO signed the Oslo Accords which handed over administration to the Palestinian Authority, but with Israel retaining control of the Gaza Strip’s airspace, some land borders and its territorial waters. The intent was to further this agreement, but discussions between the parties broke down. Israel withdrew from Gaza in 2005.

53. California town whose name means “the river” EL RIO
El Rio is a town in Ventura County, California. The town was founded as New Jerusalem in 1975, then became Jerusalem, Elrio and finally El Rio in 1905.

54. Doone who turned out to be Lady Dugal’s daughter LORNA
The novel “Lorna Doone” was written by Richard Doddridge Blackmore. R. D. Blackmore was an English novelist, very celebrated and in demand in his day (the late 1800s). His romantic story “Lorna Doone” was by no means a personal favorite of his, and yet it is the only one of his works still in print.

55. Secret rendezvous TRYST
In its most general sense, a tryst is a meeting at an agreed time and place. More usually we consider a tryst to be a prearranged meeting between lovers. The term comes from the Old French “triste”, a waiting place designated when hunting.

56. Furniture store that also sells Swedish meatballs IKEA
Did you know that IKEA was founded by Ingvar Kamprad in 1943 when he was just 17-years-old??!! IKEA is an acronym that stands for Ingvar Kamprad Elmtaryd Agunnaryd (don’t forget now!). Elmtaryd was the name of the farm where Ingvar Kamprad grew up, and Agunnaryd is his home parish in Sweden.

60. No. at the beach SPF
In theory, the sun protection factor (SPF) is a calibrated measure of the effectiveness of a sunscreen in protecting the skin from harmful UV rays. The idea is that if you wear a lotion with say SPF 20, then it takes 20 times as much UV radiation to cause the skin to burn than it would take without protection. I say just stay out of the sun …