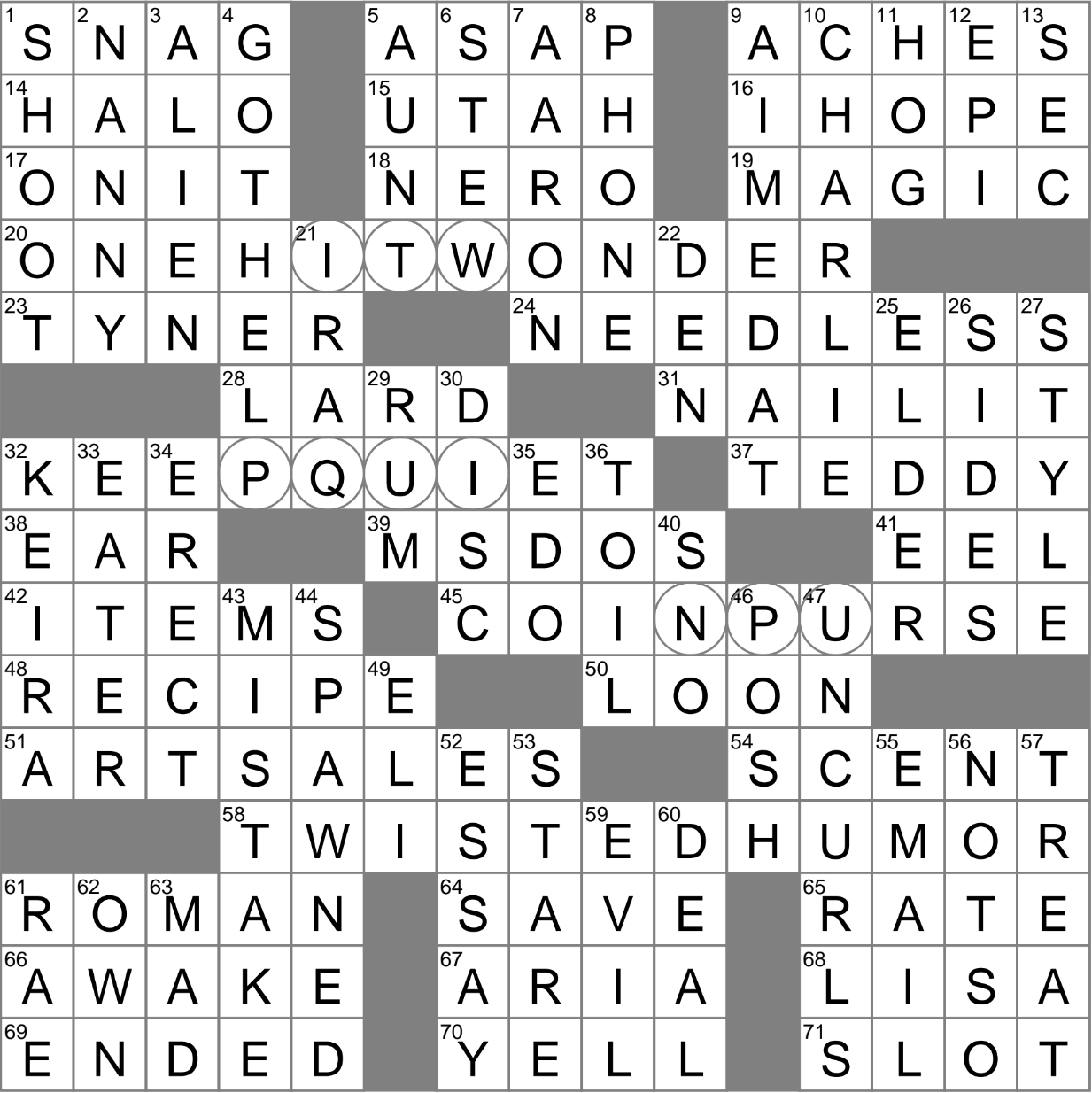 Themed answers each include a TWISTED synonym of “HUMOR” hidden within:

Pure Barre is a chain of fitness studios that specializes in musical workouts that make use of the barre.

Barre is a form of exercise that uses a ballet barre and incorporates classical moves from the world of ballet. The barre program dates back to 1959 when ballerina Lotte Berk introduced it in London.

Halo Top Creamery is a brand of ice cream that contains less refined sugars. The sugars are replaced with stevia and erythritol, a plant-based sweetener and a sugar alcohol.

I find Claudius to be the most fascinating of all the Roman Emperors. He had a lot going against him, as he walked with a limp and was slightly deaf. Claudius was put in office by the Praetorian Guard (the emperor’s bodyguards) after Caligula was assassinated. Claudius had very little political experience and yet proved to be very forward-thinking and capable.

McCoy Tyner is a jazz pianist from Philadelphia. For many years, Tyner was a member of the John Coltrane Quartet. McCoy’s younger brother is Jarvis Tyner, a member of the Communist Party USA who ran for Vice President in 1972 and 1976.

The item of lingerie known as a teddy can also be called “camiknickers”. The alternative name was used when the one-piece garment was introduced in the twenties, a combination of a camisole and panties (aka “knickers”).

The bird known as a loon here in North America is called a diver in Britain and Ireland. The name “diver” comes from the bird’s habit of swimming calmly and then suddenly diving below the surface to catch a fish. The name “loon” comes from an Old English word meaning “clumsy” and reflects the awkward gait of the bird when walking on land.

The term “diva” comes to us from Latin via Italian. It is the feminine form of “divus” meaning “divine one”. The word is used in Italy to mean “goddess” or “fine lady”, and especially is applied to the prima donna in an opera. We often use the term to describe a singer with a big ego.

2 Mary Poppins, for one : NANNY

The “Mary Poppins” series of children’s novels were written by Australian-born English writer and actress P. L. Travers. Poppins is a magical children’s nanny with a best friend Bert. In the famous 1964 musical film adaptation of the Mary Poppins stories, Poppins is played by Julie Andrews and Bert is played Dick Van Dyke.

10 “All the Birds in the Sky” Nebula winner __ Jane Anders : CHARLIE

Charlie Jane Anders’ 2016 novel “All the Birds in the Sky” is a science fantasy work that falls into the category of speculative fiction. It is about the relationship between a techno-geek named Laurence and a witch named Patricia, and their efforts to stop the “Unraveling” of the world.

The Bacardi company is still family-owned and operated, and is based in Hamilton, Bermuda. The company was founded in Santiago de Cuba and became successful by selling a refined form of rum, something new to a market that was used to a crude, dark rum. The Bacardi family opposed the Castro regime as it came to power, so the company had to relocate to Bermuda.

“Bend It Like Beckham” is a 2002 British-Indian movie that centers on a young Punjabi Sikh living in London who loves soccer, but is forbidden to play by her parents. The two leads in the film are Parminder Nagra and Keira Knightley. Nagra went on to play Dr. Neela Rasgotra in TC medical drama “ER”, and Knightley went on to a remarkably successful Hollywood career.

“A Room of One’s Own” is an essay by Virginia Woolf that was first published in 1929. It is celebrated as a feminist text.