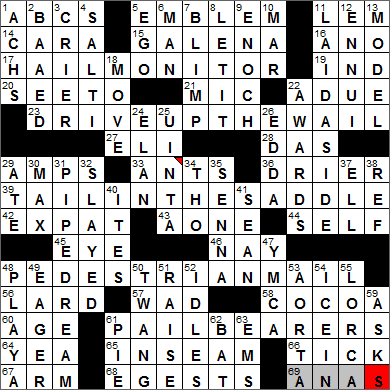 CROSSWORD SETTER: Peg Slay
THEME: All to Ail … today’s themed answers are well-known phrases, but with the letter sequence -ALL changed to -AIL to suit the clue:

17A. Device that tracks certain weather? HAIL MONITOR (from “hall monitor”)
23A. Make a mournful cry louder? DRIVE UP THE WAIL (from “drive up the wall”)
39A. Follow, oater-style? TAIL IN THE SADDLE (from “tall in the saddle”)
48A. Run-of-the-mill letters? PEDESTRIAN MAIL (from “pedestrian mall”)
61A. Eight maids a-milking? PAIL BEARERS (from “pallbearers”)

Today’s Wiki-est, Amazonian Googlies
Across
1. “Sesame Street” lessons ABCS
Back in 1966, the Carnegie Institute allocated money to study the use of television to help young children prepare for school. The institute gave an $8million grant to set up the Children’s Television Workshop with the task of creating an educational TV program for young people. The program began to come together, especially after Jim Henson (of Muppet fame) got involved. The name “Sesame Street” was chosen simply because it was the “least disliked” of all names proposed just before the program went on the air.

11. NASA vehicle LEM
In the Apollo program, the Lunar Excursion Module (LEM) was the vehicle that actually landed on the moon and returned the astronauts to the command module that was orbiting overhead. The third LEM built was named “Spider”, and it participated in the Apollo 9 mission which tested the functionality of the LEM design in space. The fourth LEM was called “Snoopy” and it flew around the moon in the Apollo 10 mission, the dress rehearsal for the upcoming moon landing. Apollo 11’s LEM was of course called “Eagle” and it brought Neil Armstrong and Buzz Aldrin to and from the moon’s surface. Another famous LEM was Apollo 13’s Aquarius. Although Aquarius never landed on the moon, it did serve as a “lifeboat” for the three astronauts after the explosive rupture of an oxygen canister in the Service Module.

15. Lead ore GALENA
Galena is the most commonly used mineral to produce lead. It is a form of lead sulfide. Galena is the state mineral of Missouri and of Wisconsin.

19. Ken. neighbor IND
The US states of Kentucky (Ken.) and Indiana (Ind.) are neighbors.

22. Together, in music A DUE
“A due” is a musical term meaning “together”, and literally translates from Italian as “by two”.

27. Bulldog, perhaps ELI
The Yale Bulldogs are the athletic teams of Yale University. The Yale school mascot is “Handsome Dan”, the Yale bulldog.

28. German article DAS
“Der”, “die” and “das” are German words meaning “the”. “Der” is used with a masculine noun, “die” with a feminine noun and “das” with a neuter noun.

29. Lollapalooza gear AMPS
Lollapalooza is a music festival held annually in varying locations around North America. There have also been Lollapalooza festivals held overseas from 2010. The word “lollapalooza” mean “extraordinary thing, person or event”. The festival’s founder heard the term used in a “Three Stooges” short film, liked it and so used it for his musical event.

39. Follow, oater-style? TAIL IN THE SADDLE (from “tall in the saddle”)
The term “oater” that is used for a western movie comes from the number of horses seen, as horses love oats!

56. Pie crust ingredient LARD
Fat, when extracted from the carcass of an animal, is called “suet”. Untreated suet decomposes at room temperature quite easily so it has to be “rendered” or purified to make it stable. Rendered fat from pigs is what we call “lard”. Rendered beef or mutton fat is known as “tallow”.

61. Eight maids a-milking? PAIL BEARERS (from “pallbearers”)
A pall is a cloth used to cover a casket at a funeral. Pallbearers actually carry the coffin, covered by the pall. The phrase “casting a pall over”, meaning to create a dark mood, is metaphorical use of the pall over the casket.

There are “eight maids a-milking” in the carol called “The 12 Days of Christmas”.

67. Humerus locale ARM
The humerus is the long bone in the upper arm.

69. Santa __: dry winds ANAS
The Santa Ana winds are the very dry air currents that sweep offshore late in the year in Southern California. Because these air currents are so dry, they are noted for their influence over forest fires in the area, especially in the heat of the fall. The winds arise from a buildup of air pressure in the Great Basin that lies between the Rocky Mountains and the Sierra Nevada. Under the right conditions, that air spills over the peaks of the Sierra Nevada and basically “falls” down the side of the Sierra range, heading for the ocean. As the air falls it becomes drier and heats up so that relative humidity can fall to below 10% by the time it hits the coast.

Down
1. Rhine whines ACHS
The German exclamation “ach!” is usually translated into English as “oh!”

The river running through Germany that we know in English as the Rhine, is called “Rhein” in German.

3. Old-time newsman CRIER
Town criers make public announcements on the streets, usually shouting “Oyez! Oyez! Oyez!” to attract attention. The term “oyez” derives from the Anglo-Norman word for “listen” and is used in this instance to me “Hear ye!”

4. 1972 missile pact SALT I
There were two rounds of Strategic Arms Limitation Talks between the US and the Soviet Union, and two resulting treaties (SALT I & SALT II). The opening round of SALT I talks were held in Helsinki as far back as 1970.

5. Id checker? EGO
Sigmund Freud created a structural model of the human psyche, breaking it into three parts: the id, the ego, and the super-ego. The id is that part of the psyche containing the basic instinctual drives. The ego seeks to please the id by causing realistic behavior that benefits the individual. The super-ego almost has a parental role, contradicting the id by introducing critical thinking and morals to behavioral choices.

7. Skycam carrier BLIMP
There is an important difference between a “blimp” (like “The Goodyear Blimp”) and an airship (like a Zeppelin). An airship is a rigid structure with an internal framework that helps maintain the shape of the airbag, whereas a blimp uses the pressure of the helium gas inside the airbag to give it shape. Also, blimps are usually heavier than air and so will sink slowly to the ground should the engines lose power. They maintain their lift with forward motion and by raising the nose slightly.

8. The Beatles’ “__ Be” LET IT
“Let It Be” was the last album that the Beatles released as an active group playing together. The title song “Let It Be” was written by Paul McCartney, and it is clearly one of his own favorites. McCartney says that he was inspired to write the song after having had a dream about his mother (who had died some years earlier from cancer). In fact he refers to her (Mary McCartney) in the line “Mother Mary comes to me”. Paul’s second wife, Linda, is singing backing vocals on the song, the only time she is known to have done so in a Beatles recording. 18 years after that 1970 recording was made, Paul, George and Ringo sang “Let It Be” at a memorial service for Linda, who was also lost to cancer. Sad stuff, but a lovely song …

9. Cain’s oldest son ENOCH
After Cain murdered his younger brother Abel, he was sent to the Land of Nod as a punishment. There his wife Awan had their first child, a boy called Enoch.

12. Blasé state ENNUI
“Ennui” is the French word for boredom, a word that we now use in English. It’s one of the few French words we’ve imported that we haven’t anglicized and actually pronounce “correctly”.

24. Panache ELAN
Our word “élan” was imported from French, in which language the word has a similar meaning to ours i.e “style” or “flair”.

26. Norse mythology source EDDA
The Poetic Edda and Prose Edda are two ancient works that are the source for much of Norse mythology. Both Eddas were written in the 13th century, in Iceland.

31. Winning the lottery, usually PIPE DREAM
In common parlance, a “pipe dream” is a vain hope for something that is unlikely to take place. The original pipe dreams were visions that were experienced after taking opiates.

35. Medicinal shrub SENNA
Sennas are used as purgatives and laxatives.

40. Jersey add-on -ITES
Folks from New Jersey are officially known as “New Jerseyans”, although the term “New Jerseyite” is also quite common.

47. Gesture-driven hit YMCA
“YMCA” was released by Village People and has been adopted as an anthem by the gay community. The song was written by Victor Willis, a straight member of the mostly gay band, and he clarifies that the lyrics are extolling the virtues of the “YMCA” as a source of recreation for black urban youth. I think he might have been winking when he said that …

48. __ del Carmen, Mexico PLAYA
Playa del Carmen is a resort city located south of Cancún in Eastern Mexico. The city is named for Our Lady of Mount Carmel, the patron saint of Cancún.

53. It originates from the left ventricle AORTA
The aorta originates in the heart and extends down into the abdomen. It is the largest artery in the body.

55. Spanish poet Federico García __ LORCA
Garcia Lorca was a Spanish poet and dramatist. Lorca is as famous for his poems and his plays as he is for the circumstances of his death. Although it has never been irrefutably proven, many believe that he was shot and killed while in the custody of Nationalist militia, one month after the outbreak of the Spanish Civil War.