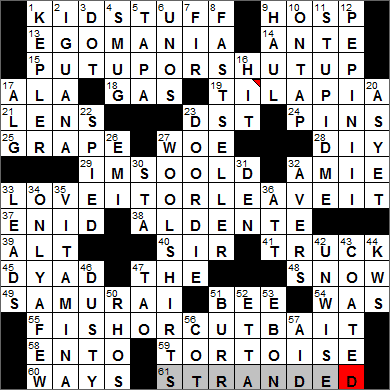 CROSSWORD SETTER: Jeff Wechsler
THEME: Choices … each of today’s themed answers is a common phrase that is also a choice:

19. Often-farmed fish TILAPIA
The name “tilapia” is used for almost a hundred species of related fish, most of which are found in freshwater. Tilapia are found in many fish farms as they grow very quickly and are popular in restaurants.

23. “Spring ahead” abbr. DST
On the other side of the Atlantic, Daylight Saving Time (DST) is known as “summer time”. The idea behind summer/daylight-savings is to move clocks forward an hour in spring and backwards in the fall so that afternoons have more daylight.

24. Ones falling in alleys PINS
Bowling has been around for an awfully long time. The oldest known reference to the game is in Egypt, where pins and balls were found in an ancient tomb that is over 5,000 years old. The first form of the game to come to America was nine-pin bowling, which had been very popular in Europe for centuries. In 1841 in Connecticut, nine-pin bowling was banned due to its association with gambling. Supposedly, an additional pin was added to get around the ban, and ten-pin bowling was born.

28. Network offering home improvement advice DIY
The DIY Network is a television channel that focuses on DIY (do-it-yourself) projects. You can learn about anything from rebuilding an engine to scrapbooking on the DIY channel.

29. “__ they’ve canceled my blood type”: Bob Hope I’M SO OLD
I remember my first non-business visit to Los Angeles. I was a typical tourist and bought a map showing the homes of the stars and drove around Beverly Hills absorbing all the glitz. At one point I drove past a Rolls Royce that was stopped in oncoming traffic, waiting to make a left turn. The window was down, and the driver was puffing away on a big cigar. It was none other than Bob Hope. Seeing him there right beside me, that was a big thrill …

Dijon is a city in eastern France, in the Burgundy region. Dijon is famous for its mustard, a particularly strong variation of the condiment. The European Union doesn’t protect the name “Dijon” so anyone can use it on a label. That seems fair enough to me given that 90% of the mustard made in and around Dijon is produced using mustard seed imported from Canada!

37. Geraint’s wife ENID
“Idylls of the King” is a cycle of twelve poems by Alfred, Lord Tennyson that retells the tale of King Arthur. One of the “idylls” is the story of Geraint and Enid. Tennyson’s Enid gave her name to the city of Enid, Oklahoma.

38. Trattoria preference AL DENTE
The Italian expression “al dente” literally means “to the tooth” or “to the bite” and is used to describe not only pasta, but also vegetables that are cooked so that they are tender yet still crisp.

40. Geraint’s title SIR
Geraint was one of King Arthur’s knights.

49. Warrior in “Rashomon” SAMURAI
“Rashomon” is a period drama film directed by Akira Kurosawa that was released in 1950. “Rashomon” was the movie that first introduced Kurosawa to western audiences. The film’s title refers to the huge gate to the city of Kyoto.

59. Galápagos denizen TORTOISE
The external shell of a tortoise is actually fused to the creature’s ribcage. Tortoises often have long lives. The oldest recorded age for a tortoise is 188 years.

Down
1. NASA space observatory named for a Renaissance astronomer KEPLER
Kepler is a NASA space observatory that was launched in 2009. Kepler’s mission is to identify Earth-like planets that are orbiting stars other than our Sun. Based on the mission’s results to date, scientists suggest that there at least 17 billion Earth-sized exoplanets in the Milky Way.

Johannes Kepler was a German astronomer and mathematician, famous for developing Kepler’s laws of planetary motion. Kepler’s laws are threefold, and describe the motion of the planets around the Sun.

2. Galápagos denizen IGUANA
An iguana is a lizard, and as such is cold-blooded. There are times when pet iguanas need heat from an IR lamp to maintain body temperature.

3. Pointillist’s unit DOT
Pointillism is a style of painting that grew out of Impressionism. The pointillist technique calls for the artist to use small, distinct dots of bold color to build up the image. Pointillism was developed in the late 1800s by the great French painter, Georges Seurat. You can go see his magnificent work “A Sunday Afternoon on the Island of La Grande Jatte” at The Art Institute of Chicago the next time you’re in town.

5. Spanish morsel TAPA
“Tapa” is the Spanish for “lid”, and there is no clear rationale for why this word came to be used for an appetizer. There are lots of explanations cited, all of which seem to involve the temporary covering of one’s glass of wine with a plate or item of food to either preserve the wine or give one extra space at the table.

7. Douglas __ FIR
Various species of Douglas fir are native to North and Central America, and to Asia. The tree gets its name from the Scottish botanist David Douglas, who introduced the species into Europe.

9. Schlep HAUL
Our word “schlep” means “to carry, drag”. As one might expect, “schlep” comes from Yiddish, with “shlepen” having the same meaning.

12. Charlemagne’s father PEPIN III
Pepin the Short (aka Pepin the Younger, Pepin III) was Duke of the Franks from 751 to 768. Pepin expanded the Frankish Empire and then law dictated that he had to leave the Empire divided between his two sons, Carloman I and Charlemagne. Carloman I was given lands that were centered around Paris, and Charlemagne was given lands that completely surrounded his brothers territory. So it fell to Charlemagne to defend and extend the borders of the empire. It is because of this division of power that it’s Charlemagne who we read about today, not Carloman I. It was Emperor Charlemagne who in effect founded the Holy Roman Empire.

26. U.K. record label EMI
EMI is a British music company, with the acronym originally standing for Electric and Musical Industries.

35. Carrot nutrient VITAMIN A
Vitamin A is actually a group of chemicals, including retinol, retinal and beta-carotene.

47. Way of the East TAO
The Chinese character “tao” translates as “path”, but the concept of Tao signifies the true nature of the world.

50. Sigma preceders RHOS
Rho is the Greek letter that looks just like our Roman letter “p”.

Sigma is the eighteenth letter of the Greek alphabet, and is the one used for an “ess” sound, equivalent to our letter S. There are three letters S in the name “Odysseus”, or three sigmas, as Homer would say.

51. Hamilton foe BURR
Aaron Burr was the third vice-president of the US, serving under Thomas Jefferson. In the final year of his term in office, Burr fought an illegal duel and killed his political rival Alexander Hamilton. Burr wasn’t brought to justice, but he did pay the price politically. Thomas Jefferson dropped him from his ticket in the election held the following year.

The US ten-dollar bill features the image of Alexander Hamilton, the first US Secretary of the Treasury. As such, ten-dollar bills are sometimes called “Hamiltons”. By the way, the $10 bill is the only US currency in circulation in which the portrait faces to the left.

52. She rode on Butch’s handlebars ETTA
In a marvelous scene in 1969’s “Butch Cassidy and the Sundance Kid”, Butch (Paul Newman) takes Etta (Katherine Ross) for a ride on his bicycle, while “Raindrops Keep Fallin’ on My Head” plays in the background.

53. Dark, poetically EBON
Ebony is another word for the color black (often shortened to “ebon” in poetry). Ebony is a dark black wood that is very dense, one of the few types of wood that sinks in water. Ebony has been in high demand so the species of trees yielding the wood are now considered threatened. It is in such short supply that unscrupulous vendors have been known to darken lighter woods with shoe polish to look like ebony, so be warned …