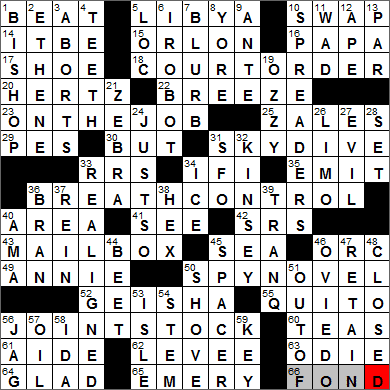 CROSSWORD SETTER: Jacob Stulberg
THEME: Out of Things … each of today’s themed answers is made up of two parts, and each part is a word that often follows the phrase OUT OF:

Today’s Wiki-est, Amazonian Googlies
Across
5. Tripoli’s land LIBYA
Tripoli is the capital city of Libya and sits on the Mediterranean Coast. The city was founded by the Phoenicians in the 7th century BC and was originally called Oea.

14. “Let __”: Beatles hit IT BE
“Let It Be” was the last album that the Beatles released as an active group playing together. The title song “Let It Be” was written by Paul McCartney, and it is clearly one of his own favorites. McCartney says that he was inspired to write the song after having had a dream about his mother (who had died some years earlier from cancer). In fact he refers to her (Mary McCartney) in the line “Mother Mary comes to me”. Paul’s first wife, Linda, is singing backing vocals on the song, the only time she is known to have done so in a Beatles recording. 18 years after that 1970 recording was made, Paul, George and Ringo sang “Let It Be” at a memorial service for Linda, who was also lost to cancer. Sad stuff, but a lovely song …

15. Acrylic fiber ORLON
Orlon is the brand name used by the DuPont Corporation for the acrylic fibers the company developed in 1941.

16. Sobriquet for Haydn PAPA
Josef Haydn was an Austrian composer, often called the “Father of the Symphony” due to his prolific output of symphonies that helped define the form. This is one of the reasons that he was known, even in his own lifetime, as “Papa Haydn”. Haydn was also the father figure among “the big three” composers of the Classical Period: Haydn, Mozart and Beethoven. Hayden was a good friend to Mozart, and a teacher of Beethoven.

17. Loafer, e.g. SHOE
The type of slip-on shoe called a “loafer” dates back to 1939. “Loafer” was originally a brand name introduced by the store Fortnum and Mason’s in London.

20. Frequency unit HERTZ
The unit of frequency measure is the hertz (Hz) and is the number of cycles per second of a periodic phenomenon.

25. Jewelry retailer ZALES
The first Zales jewelry store was opened by Morris and William Zale and Ben Lipshy in Wichita Falls, Texas, in 1924. Zales became successful largely by offering credit to their customers, a revolutionary concept at the time.

29. Foot, in zoology PES
The Latin word for “foot” is “pes”, the genitive singular of which is “pedis”. “Pedis” evolved into the suffix -pede, as in centipede and millipede.

40. Circle calculation AREA
By definition, the ratio of the circumference of a circle to its diameter is the mathematical constant known as pi. The same constant shows up as the ratio of a circle’s area to its radius squared.

45. Armada arena SEA
The most famous Armada was the Spanish fleet that sailed against England in order to overthrow Queen Elizabeth I in 1588. It failed in its mission, partly due to bad weather encountered en route. Ironically, the English mounted a similar naval attack against Spain the following year, and it failed as well.

46. Ugly Tolkien beast ORC
Orcs are mythical humanoid creatures that appear in the writings of J. R. R. Tolkien. Since Tolkien’s use of orcs, they have also been featured in other fantasy fiction and in fantasy games.

49. “Tomorrow” musical ANNIE
“Tomorrow” is a song written for the Broadway musical “Annie”. The musical was based on the Harold Gray comic strip “Little Orphan Annie”. There were two subsequent film adaptations, both really quite successful, including one released in 1982 directed by John Huston of all people. “Annie” was Huston’s only ever musical.

50. John le Carré offering SPY NOVEL
John Le Carré is the pen name of David Cornwell, an English author famous for his spy novels. Cornwell worked for British Intelligence during the fifties and sixties, even as he was writing his spy thrillers. He left MI6 soon after his most famous 1963 novel “The Spy Who Came in from the Cold”, became such a great success.

52. “Memoirs of a __”: Arthur Golden novel GEISHA
“Memoirs of a Geisha” is a novel by American writer Arthur Golden that recounts the life of a geisha working in Kyoto, Japan before, during and after WWII. Golden was helped in his research by a retired geisha called Mineko Iwasaki who claimed that she provided assistance on condition of anonymity. When her name was published in the book, Iwasaki sued and ended up with an undisclosed settlement. There was a 2005 movie adaption of the novel, which also led to some criticism in Japan. The concern was that Chinese actresses were used for the main female roles instead of Japanese actresses.

55. High capital QUITO
The full name of the capital city of Ecuador is San Francisco de Quito. Quito is the second highest administrative capital city in the world, after La Paz, Bolivia.

60. Oolong and pekoe TEAS
The name for the Chinese tea called “oolong” translates into English as “black dragon”.

A pekoe (or more commonly, orange pekoe) is a medium-grade black tea.

62. Structure with high-water marks LEVEE
A levee is an artificial bank usually made of earth, running along the length of a river. A levee is designed to hold back river water at a time of potential flooding. “Levée” is the French word for “raised” and is an American term that originated in French-speaking New Orleans around 1720.

65. Board for filers EMERY
Emery is a very hard type of rock that is crushed for use as an abrasive. Emery paper is made by gluing small particles of emery to paper. Emery boards are just emery paper with a cardboard backing. And emery boards are primarily used for filing nails.

2. Hydrocarbon gas ETHENE
Ethylene (also called ethene) has a gazillion uses, including as an anesthetic and an aid to hastening the ripening of fruit. It’s most common use though is as a major raw material in the manufacture of plastics (like polyethylene).

6. 2004 Will Smith sci-fi film I, ROBOT
“I, Robot” is an interesting 2002 science fiction film starring Will Smith that is loosely based on the excellent collection of short stories of the same name by Isaac Asimov.

19. First name in metal OZZY
Black Sabbath are an English heavy metal band set up in 1969 in Birmingham in the north of the country. Black Sabbath’s most famous band member was the lead singer, Ozzy Osbourne. Ozzy was kicked out of the group in 1979 as his drug usage was becoming overly disruptive.

21. Zoo equine ZEBRA
The name “zebra” comes from an old Portuguese word “zevra” meaning “wild ass”. Studies of zebra embryos show that zebras are basically black in color, with white stripes that develop with growth. Before this finding, it was believed they were white, with black stripes.

26. Celeb’s ride LIMO
The word “limousine” actually derives from the French city of Limoges. The area around Limoges is called the Limousin, and it gave its name to a cloak hood worn by local shepherds. In early motor cars, a driver would sit outside in the weather while the passengers would sit in the covered compartment. The driver would often wear a limousin-style protective hood, giving rise to that type of transportation being called a “limousine”. Well, that’s how the story goes anyway …

31. W. Coast airport SFO
San Francisco International Airport (SFO) serves as the main base of operations for Virgin America, and is also the maintenance hub for United Airlines. SFO was the site of a 2013 crash of an Asiana Airlines Boeing 777 that resulted in three fatalities. My wife and I had flown into SFO 24 hours earlier. That tends to be sobering …

32. 2004 biopic with the tagline “Let’s talk about sex” KINSEY
Alfred Kinsey sure did create a stir with his work and publications. He founded the Institute for Sex Research in 1947, and published the famous “Kinsey Reports” in 1948 and 1953. I enjoyed the 2004 biopic “Kinsey”, starring Irish actor, Liam Neeson in the title role.

38. With 59-Down, L-shaped tool HEX
(59. See 38-Down KEY)
The Allen wrench (or “Allen key”, as we call it back in Ireland) is a successful brand of hex wrench that was trademarked in 1943 by the Allen Manufacturing Company of Hartford , Connecticut. However, the hex wrench had in fact been around since the mid-to-late 1800s.

39. Sedative, casually TRANQ
A tranquilizer (familiarly “tranq, trank”) is a downer, a drug designed to reduce tension or anxiety.

40. Org. whose past presidents include two Mayos AMA
The list of American Medical Association (AMA) past-presidents includes William James Mayo (1906-07) and Charles Horace Mayo (1917-18). William and Charles were brothers, and were two founders of the famous Mayo Clinic located in Rochester, Minnesota.

53. Catalina, e.g. ISLE
Catalina Island is located of the mainland of the Dominican Republic, although I think the clue might actually be referring to Santa Catalina Island off the coast of California.

56. Crying __ JAG
A “crying jag” is a fit of uncontrollable weeping, and is an expression that is new to me …