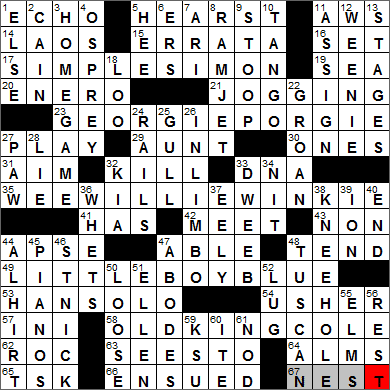 CROSSWORD SETTER: Peter Koetters
THEME: Wanted in the Nursery … each of today’s themed clues is written as words on a wanted poster, with the answer being a nursery rhyme character:

17A. WANTED: Dimwitted loiterer, for pie-tasting without intent to buy SIMPLE SIMON
23A. WANTED: Boy on the run, for unwanted kissing GEORGIE PORGIE
35A. WANTED: Delinquent minor, for breaking curfew and inappropriate dress WEE WILLIE WINKIE
49A. WANTED: Musical shepherd, for sleeping on the job LITTLE BOY BLUE
58A. WANTED: Merry monarch, for smoke pollution with his pipe OLD KING COLE

Today’s Wiki-est, Amazonian Googlies
Across
5. Early newspaper magnate HEARST
William Randolph Hearst got into publishing when he took over “The San Francisco Examiner” from his father George Hearst. Beyond his work in the newspaper business, William Randolph Hearst was also a politician and represented a district of New York in the US House. His life was the inspiration for the lead role in the 1941 movie “Citizen Kane” with Orson Welles playing the Hearst-like character. If you’re ever driving along the coast between Los Angeles and San Francisco, I’d recommend a stop at Hearst Castle, William Randolph’s magnificent estate located near San Simeon.

14. Vietnam neighbor LAOS
The official name for the country of Laos is the Lao People’s Democratic Republic. In the Lao language, the country’s name is “Meuang Lao”. The French ruled Laos as part of French Indochina, having united three separate Lao kingdoms. As there was a plural of “Lao” entities united into one, the French added the “S” and so today we tend to use “Laos” instead of “Lao”.

15. List of printing mistakes ERRATA
Errata is the past participle of the Latin word “errare” meaning “to err”. We use “errata” to mean a list of errors that have been noted in some publication.

17. WANTED: Dimwitted loiterer, for pie-tasting without intent to buy SIMPLE SIMON
The first verse of the English nursery rhyme is:

23. WANTED: Boy on the run, for unwanted kissing GEORGIE PORGIE
The first verse of the English nursery rhyme is:

Georgie Porgie, Pudding and Pie,
Kissed the girls and made them cry,
When the boys came out to play
Georgie Porgie ran away.

31. Dart thrower’s asset AIM
Darts is a wonderful game often played in British and Irish pubs, even over here in America. The scoring in a traditional game of darts is difficult to describe in a sentence or two, but the game of darts called “Round the Clock” is simply hitting the numbers 1 through 20 in sequence.

33. Crime lab evidence, briefly DNA
I’ve always been fascinated by the fact that the DNA of living things is so very similar across different species. Human DNA is almost exactly the same for every individual (to the degree of 99.9%). However, those small differences are sufficient to distinguish one individual from another, and to determine whether or not individuals are close family relations.

Wee Willie Winkie runs through the town,
Up stairs and down stairs in his night-gown,
Tapping at the window, crying at the lock,
Are the children in their bed, for it’s past ten o’clock?

43. __ sequitur: illogical conclusion NON
We use the Latin term “non sequitur” to describe an illogical statement, usually irrelevant to what has immediately preceded. The literal translation of “non sequitur” is “it does not follow”.

44. Church recess APSE
The apse of a church or cathedral is a semicircular recess in an outer wall, usually with a half-dome as a roof and often where there resides an altar. Originally apses were used as burial places for the clergy and also for storage of important relics.

Little Boy Blue,
Come blow your horn,
The sheep’s in the meadow,
The cow’s in the corn;
But where is the boy
Who looks after the sheep?
He’s under a haycock,
Fast asleep.
Will you wake him?
No, not I,
For if I do,
He’s sure to cry.

53. Harrison Ford’s “Star Wars” role HAN SOLO
Han Solo is the space smuggler in “Star Wars” played by Harrison Ford. Ford was originally hired by George Lucas just to read lines for actors during auditions for “Star Wars”, but over time Lucas became convinced that Ford was right for the pivotal role of Han Solo.

62. Mythical giant bird ROC
The mythical roc is a huge bird of prey, reputedly able to carry off and eat elephants.

67. Digs made of twigs NEST
“Digs” is short for “diggings” meaning “lodgings”, but where “diggings” came from, no one seems to know.

Down
2. Brother of Abel CAIN
The story of Cain and Abel not only appears in the Christian and Hebrew Bibles, it also features in the Qur’an. In the Muslim account the brothers are named Qabil and Habil.

4. Fish hawk OSPREY
The Osprey is also known as the sea hawk or fish eagle.

7. Onassis nickname ARI
Aristotle Onassis was born to a successful Greek shipping entrepreneur in Smyrna in modern-day Turkey. However, his family lost its fortune during WWI and so Aristotle worked with his father and built up a new business empire centered on the importation of tobacco. In 1957, Aristotle founded the Greek national airline, what is today called Olympic Air, and he also got into the business of shipping oil around the world. He married Athina Livanos in 1946, the daughter of a wealthy shipping magnate. They had two children, including the famous Christina Onassis. Livanos divorced Onassis on discovering him in bed with the opera singer Maria Callas. Onassis ended his affair with Callas in order to marry Jackie Kennedy in 1968.

8. Type of missile engine RAMJET
A ramjet is a type of jet engine that uses the speed of the incoming air (due to the aircraft’s forward motion) to compress that air prior to combustion. In a regular jet engine, the air is compressed by a fan that sucks air into the combustion chamber. In a ramjet, air enters the chamber usually at supersonic speed (the speed of the jet) and is slowed prior to combustion. In a scramjet, a variant of a ramjet, the air is maintained at supersonic speeds, allowing the scramjet to operate at very high velocity.

9. Small, raised porch in front of a door STOOP
A stoop is a raised platform at the door of a house. “Stoop” came into American and Canadian English in the mid-1700s from the Dutch “stoep” meaning “flight of steps”.

10. Dramatic ballroom dance TANGO
The dramatic dance called the tango originated in the late 1800s in the area along the border between Argentina and Uruguay.

12. Hot dog WEENIE
What we call a wiener in this country is known as a Vienna sausage in Germany. It was first produced by a butcher from Frankfurt who was living in Vienna, hence the name “Wiener”, which is German for “of Vienna”. Paradoxically, the same sausage is called a Frankfurter in Vienna, as it was created by someone from Frankfurt. It’s all very confusing …

13. Oater transports STAGES
The term “oater” that is used for a western movie comes from the number of horses seen, as horses love oats!

18. Lav in Leeds LOO
I went to school for a while not far from Leeds in West Yorkshire in the north of England. Prior to the Industrial Revolution, Leeds was a major center for the production and trading of wool, and then with the onset of mechanization it became a natural hub for manufacture of textiles. These days Leeds is noted as a shopping destination and so has been dubbed “the Knightsbridge of the North”.

34. Picayune point to pick NIT
Something described as “picayune” is of little value or importance. The original picayune was a Spanish coin worth half a real, not a lot of money.

44. “Java” trumpeter AL HIRT
Al Hirt was a trumpeter and bandleader. Hirt’s most famous recordings were the song “Java” and the album “Honey in the Horn”.

45. Baby grands, e.g. PIANOS
What was remarkable about the piano when it was invented, compared to other keyboard instruments, was that notes could be played with varying degrees of loudness. This is accomplished by pressing the keys lightly or firmly. Because of this quality, the new instrument was called a “pianoforte”, with “piano” and “forte” meaning “soft” and “loud” in Italian. We tend to shorten the name these days to just “piano”.

46. Jolly old Xmas visitor ST NICK
Saint Nicholas of Myra is the inspiration for Santa Claus. Nicholas was the Bishop of Myra (now in modern-day Turkey) during the 4th century AD, and was a cleric known for being generous to the poor. Centuries after he died, his remains were desecrated by Italian sailors and moved to Bari in Italy. One legend has it that the relics were moved again centuries later and reburied in the grounds of Jerpoint Abbey in Co. Kilkenny in Ireland, where you can visit the grave today. I choose to believe that Santa Claus’s relics are indeed buried in my homeland …

48. Florence native, for one TUSCAN
“Firenze” is the Italian name for the city that we know in English as Florence.

51. Funny DeGeneres ELLEN
Ellen DeGeneres is a very, very successful TV personality, having parlayed her career in stand-up comedy into lucrative gigs as an actress and talk show host. Back in 1997 DeGeneres chose the “Oprah Winfrey Show” to announce that she was a lesbian. Her character on “The Ellen Show” also came out as a lesbian, in a scene with her therapist, played by Oprah Winfrey. Nice twist!