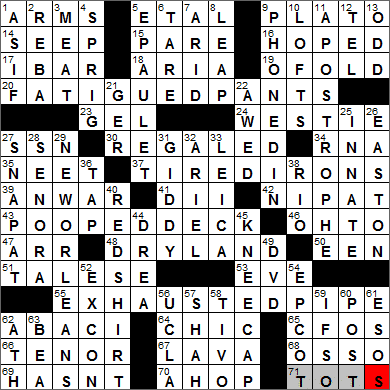 CROSSWORD SETTER: Marti DuGuay-Carpenter
THEME: D (sound) in the Middle … each of today’s themed answers is a well-known, two-word term, with a “D” sound inserted at the end of the first word i.e. -D or -ED:

20A. Post-marathon sounds? FATIGUE(D) PANTS
37A. Golfer’s outdated set of clubs? TIRE(D) IRONS
43A. Casualty of an all-night poker game? POOP(ED) DECK
55A. Problem for Sherlock when he’s out of tobacco? EXHAUST(ED) PIPE

Today’s Wiki-est, Amazonian Googlies
Across
9. Academy teacher PLATO
The Greek philosopher Plato founded his school called “the Academy” circa 387 BC in Athens. The site Plato chose for his school was a walled-off grove of olive trees that lay just outside the city. The grove was sacred, dedicated to the goddess Athena, but named “Akademia” after a mythological hero called Akademos. So, it is the mythical Akademos who ultimately gives us our word “academy”.

18. Teatro alla Scala highlight ARIA
The La Scala Opera House opened in 1778. It was built on the site of the church of Santa Maria della Scala, which gave the theater its name: “Teatro alla Scala”.

20. Post-marathon sounds? FATIGUE(D) PANTS
The marathon is run over 26 miles and 385 yards, and of course commemorates the legendary messenger-run by Pheidippides from the site of the Battle of Marathon back to Athens. The actual distance run today was decided in 1921, and matches the length of the modern-day Marathon-Athens highway.

24. Scottie’s relative WESTIE
The West Highland White Terrier is a cute-looking little white dog from Scotland. The “Westie” looks very much like a related breed, the little black Scottish Terrier. The two breeds can be seen sitting side-by-side on the famous label of Black & White Scotch whisky.

34. Messenger __ RNA
Ribonucleic Acid (RNA) is an essential catalyst in the manufacture of proteins in the body. The genetic code in DNA determines the sequence of amino acids that make up each protein. That sequence is read in DNA by messenger RNA, and amino acids are delivered for protein manufacture in the correct sequence by what is called transfer RNA. The amino acids are then formed into proteins by ribosomal RNA.

35. Bygone depilatory NEET
The hair removal product “Neet” was launched in Canada in 1901, and was also sold as “Immac”. Today it is sold under the name “Veet”.

39. Egyptian leader between Gamal and Hosni ANWAR
Gamal Abdel Nasser was the second president of Egypt, from 1956 until he died in 1970. He stood alongside Muhammad Naguib, Egypt’s first president, during the Egyptian Revolution of 1952 that overthrew the ruling monarchy of Egypt and Sudan. Nasser was an advocate of Pan-Arabism, an ideology promoting unification of Arab peoples and countries. President Nasser went so far as forming the United Arab Republic (UAR), a union between Egypt and Syria that started in 1958 but fell apart in 1961 when Syria withdrew.

Hosni Mubarak was the fourth President of Egypt, taking over after Anwar Sadat was assassinated in 1981. Mubarak resigned in 2011 in the early months of the Arab Spring after 18 days of public demonstrations. He was sentenced to life imprisonment in 2012 and is reported to be extremely sick in detention, and is perhaps even on life support.

43. Casualty of an all-night poker game? POOP(ED) DECK
A poop deck is a deck located on the roof of the cabin at the stern of a ship. The term “poop” comes from the French “poupe” meaning “stern”.

47. SFO posting ARR
San Francisco International Airport (SFO) is the maintenance hub for United Airlines, and is the principal base for Virgin America. I just booked tickets today for flights out of SFO to my homeland next month. Very excited …

51. “Thy Neighbor’s Wife” author TALESE
Gay Talese is an American author, famous as a journalist in the sixties at “The New York Times”. His 1981 book “Thy Neighbor’s Wife” is a study of sexuality in America in the early fifties. Apparently, as research for the book, Talese had sexual relations with his own neighbor’s wife for several months at a sexuality resort in Southern California called Sandstone Retreat.

55. Problem for Sherlock when he’s out of tobacco? EXHAUST(ED) PIPE
According to author Sir Arthur Conan Doyle, his Sherlock Holmes character was based on a Dr. Joseph Bell for whom Doyle worked in Edinburgh. That said, Bell actually wrote a letter to Doyle in which he said “you are yourself Sherlock Holmes and well you know it”.

62. Eastern adders? ABACI
The abacus was used as a counting frame long before man had invented a numbering system. It is a remarkable invention, particularly when one notes that the abacus is still widely used today across Africa and Asia.

66. Sax range TENOR
The saxophone was invented by Belgian Adolphe Sax. Sax developed lip cancer at one point in his life, and one has to wonder if his affliction was related to his saxophone playing (I am sure not!). I had the privilege of visiting Sax’s grave in the Cemetery of Montmartre in Paris a few years ago.

68. Berlusconi’s bone OSSO
“Osso” is the Italian word for bone as in the name of the dish Osso Buco: braised veal shanks.

Silvio Berlusconi served as Prime Minister of Italy on three different occasions from 1994 to 2011. Berlusconi has been involved many scandals over the past few decades, including accusations that he solicited at least one minor for sex. He was sentenced in 2012 to four years in prison for tax evasion, but he remains free and is expected to appeal the court’s decision.

Down
2. Country’s McEntire REBA
Reba McEntire is a country music singer and television actress. McEntire starred in her own sitcom called “Reba” that aired on the WB and the CW cable channels from 2001 to 2007.

6. Empty-truck weight TARE
“Tare” is the weight of a container that is deducted from the gross weight to determine the net weight, the weight of the container’s contents.

21. Whence BMWs GER
BMW stands for Bayerische Motoren Werke, which translates into “Bavarian Motor Works”. BMW was making aircraft engines during WWI, but had to cease that activity according to the terms of the Treaty of Versailles. The company started making motorcycles, and then moved into automobile production starting in 1928. BMW moved back into aircraft engine manufacturing during the build-up of the Luftwaffe prior to WWII.

28. Madrid madam SENORA
Madrid is the largest city in Spain and the capital. Madrid is located very close to the geographical center of the country.

32. Prospero’s spirit servant ARIEL
Ariel is a character in Shakespeare’s “The Tempest”, a spirit who serves Prospero, the hero of the piece.

William Shakespeare’s “The Tempest” tells the story of Prospero, who was removed from the throne of Milan and banished to a deserted island along with his daughter Miranda. Prospero learns sorcery while castaway, and eventually conjures up a tempest that drives those who usurped his throne onto the island’s shores (in particular his own brother, Antonio). On the island, Prospero is eventually successful in revealing Antonio’s lowly nature.

33. High-end camera LEICA
Leica is a German optics company, famous for production of lenses and cameras. The 1913 Leica was the first practical camera that could use 35mm film, a size chosen because it was already the standard for film used in motion pictures.

40. Prophetic attire worn by most doomed characters on the original “Star Trek” TV show RED SHIRT
In the original “Star Trek” television series, security personnel wore red shirts. One thing that became clear over time was that whenever someone with a red shirt appeared, there was a high probability that he or she was going to die during the episode. The phenomenon became so predictable that the term “redshirt” came to be applied to any stock character in fiction who dies soon after introduction into a storyline.

44. De Matteo of “The Sopranos” DREA
Drea de Matteo is an actress who is most familiar to me for playing Adriana la Cerva on HBO’s wonderful series “The Sopranos”. She also played Joey’s sister on the short-lived “Friends” spin-off called “Joey”, and the character Angie Bolen on “Desperate Housewives”.

49. Netflix rental DVD
Netflix was founded in Los Gatos, California in 1997. The company delivered it’s billionth DVD in 2007. I presume the renter wasn’t charged for that movie …

54. Florida attraction EPCOT
EPCOT Center (now just called Epcot) is the theme park beside Walt Disney World in Florida. EPCOT is an acronym for Experimental Prototype Community of Tomorrow and is a representation of the future as envisioned by Walt Disney. Walt Disney actually wanted to build a living community for 20,000 residents at EPCOT, but he passed away before that vision could be realized.

57. Deposed ruler SHAH
The last Shah of Iran was Mohammed-Reza Shah Pahlavi, as he was overthrown in the revolution led by the Ayatollah Khomeini in 1979. The post-revolution government sought the extradition of the Shah back to Iran while he was in the United States seeking medical care (he had cancer). His prolonged stay in the United States, recovering from surgery, caused some unrest back in Iran and resentment towards the United States. Some say that this resentment precipitated the storming of the US Embassy in Tehran and the resulting hostage crisis.

61. Those, in Tijuana ESOS
Tijuana is the largest city in the Mexican state of Baja California, and lies just across the US-Mexico border from San Diego. Tijuana is also the most westerly of all Mexican cities. A lot of Tijuana’s growth took place in the twenties as tourists flocked south of the border during the days of prohibition in the US. One of the many casinos and hotels that flourished at that time was Hotel Caesar’s in the Avenida Revolución area. Hotel Caesar’s claims to be the birthplace of the now ubiquitous Caesar Salad.

63. Actress Arthur BEA
Actress Bea Arthur’s most famous roles were on television, as the lead in the “All in the Family” spin-off “Maude” and as Dorothy Zbornak in “The Golden Girls”. Arthur also won a Tony for playing Vera Charles on stage in the original cast of “Mame” in 1966, two years after she played Yente the matchmaker in the original cast of “Fiddler on the Roof”.