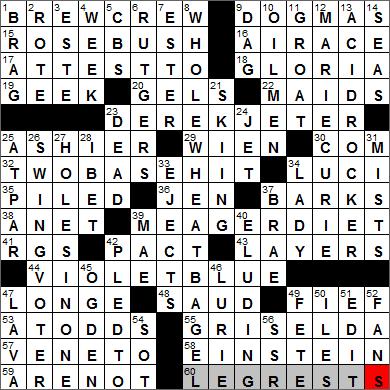 The Brewers are Milwaukee’s professional baseball team, and they play at Miller Park. Miller Park was completed in 2001. The stadium has the country’s only fan-shaped convertible roof, and it can open and close in under ten minutes.

9. Manifesto fodder DOGMAS
A dogma is a set of beliefs, with the plural being “dogmata” (or “dogmas”, if you’re not a pedant like me!)

A political party’s platform is also known as its manifesto, and is a list of actions that the party would support if elected. Items on this list are called “planks”, a play on the planks of wood that might support a public speaking platform.

16. Flying star AIR ACE
A flying ace is an aviator who has shot down a number of enemy planes during combat. The qualifying number of kills seems to vary, but five is common. The first use of “ace” was during WWI when the French newspapers dubbed pilot Adolphe Pegoud “l’as” (French for “the ace”) when he shot down his fifth German plane.

18. Van Morrison song whose title is spelled out in the chorus GLORIA
Van Morrison is a singer-songwriter from Belfast in Northern Ireland. Back in Ireland we refer to him as “Van the Man”. Some of his more famous songs are “Brown Eyed Girl”, “Moondance”, “Gloria” and “Have I Told You Lately”.

19. Computer __ GEEK
The original “geek” was a sideshow performer, perhaps at a circus.

23. Record holder for most games played at shortstop for one team DEREK JETER
Derek Jeter has played his entire professional baseball career with the New York Yankees, and is the team’s captain. Jeter is the all-time career leader for the Yankees in hits, games played, stolen bases and at bats. He is also the all-time leader in hits by a shortstop in the whole of professional baseball.

29. Capital of Österreich WIEN
In German, Vienna (Wien) is the capital city of Austria (Österreich).

The name “Austria” is a Latin variant of the German name for the country: “Österreich”. “Österreich” itself means “Eastern borderlands”, a reference to the country’s history as a prefecture of neighboring Bavaria to the west.

34. She married during her father’s presidency LUCI
Luci Baines Johnson is the youngest daughter of President Lyndon Johnson. Luci married Patrick Nugent in Washington, D.C. in 1966, while her father was still in the White House. The Nugents had their marriage annulled by the Catholic Church in 1979, and Luci remarried in 1984, to Ian J. Turpin.

36. “Friends” actress, familiarly JEN
Jennifer Aniston won a 2002 Emmy for playing Rachel on the great sitcom “Friends”. Jennifer’s parents are both actors, and her godfather is the actor Telly Savalas.

39. Lenten fare, say MEAGER DIET
In Latin, the Christian season that is now called Lent was termed “quadragesima” (meaning “fortieth”), a reference to the forty days that Jesus spent in the desert before beginning his public ministry. When the church began its move in the Middle Ages towards using the vernacular, the term “Lent” was introduced. “Lent” comes from “lenz”, the German word for “spring”.

43. Parfait features LAYERS
A parfait is a frozen dessert made from sugar, syrup, egg and cream. The American version of this popular French dessert is a layered creation, featuring parfait cream, ice cream and flavored gelatins topped with whipped cream and possibly a liqueur. The term “parfait” is French for “perfect”.

44. Former Crayola color that’s still one when its name is reversed VIOLET BLUE
Violet Blue and Blue Violet are both colors of Crayola crayons.

48. Mideast’s House of __ SAUD
The Kingdom of Saudi Arabia is the largest Arab country in the Middle East and is the world’s largest oil producer, home to the world’s largest oil reserves. The Saudi dynasty started in central Arabia in 1744 when the secular leader Muhammad ibn Saud joined forces with the Islamic scholar and Imam, Muhammad ibn Abd-al-Wahhab. At the time, Saud was a ruler of a town near Riyadh and he was determined to bring “true” Islam to the Arabian peninsula. Since 1744 the fortunes of the Saudi family have risen and fallen, but it is that same family who rules what we know today as Saudi Arabia.

49. Feudal estate FIEF
In the days of feudalism, a “fief” was basically a “fee” (the words “fee” and “fief” have the same origins) paid by a lord in exchange for some benefit to him, perhaps loyalty or military service. The fief itself was often land granted by the Lord.

55. Vivaldi opera based on “The Decameron” GRISELDA
Antonio Vivaldi was one of the great composers of the Baroque period. Vivaldi achieved fame and success within in his own lifetime, notoriety that faded soon after he died. His music has reemerged in recent decades and most people are familiar with at least part of his most famous composition, the violin concerto called “The Four Seasons”. Vivaldi was nicknamed “The Red Priest” because he was indeed a priest, and he had red hair.

57. Rome’s Via __ VENETO
Via Veneto is (actually Via Vittoria Veneto) is an upmarket street in Rome, the site of many of the pricier hotels. It was made famous in Federico Fellini’s “La Dolce Vita”, and is still the home to Harry’s Bar and Café de Paris, both featured in the movie.

Down
3. Cádiz-to-Málaga dirección ESTE
“Este” (east) is a “dirección” (direction), in Spanish.

Cádiz is a port city in southwestern Spain, in the autonomous community of Andalusia. Cádiz is a remarkable city geographically, in that it sits on a thin spit of land that juts out into the sea.

The city of Malaga is on the Costa del Sol in the South of Spain, as are the famous European tourist destinations of Torremolinos and Marbella. The Costa del Sol was made up of sleepy little fishing villages until the 1980s when the European sunseekers descended on the region. I wouldn’t recommend it for a holiday quite frankly …

6. “Jersey Roots, Global Reach” university RUTGERS
Rutgers, the State University of New Jersey, was founded in 1766 as Queen’s College and was one of the nine Colonial Colleges that existed prior to the American Revolution. The Rutgers name was chosen in 1812 in honor of Colonel Henry Rutgers, a Revolutionary War hero and university benefactor.

7. Methyl bisulfate, e.g. ESTER
Esters are very common chemicals. The smaller, low-molecular weight esters are usually pleasant smelling and are often found in perfumes. At the other end of the scale, the higher-molecular weight nitroglycerin is a nitrate ester and is very explosive, and polyester is a huge molecule and is a type of plastic. Fats and oils found in nature are fatty acid esters of glycerol.

8. Breakfast choice WHOLE-WHEAT BAGEL
The bagel was invented in the Polish city of Kraków in the 16th century. Bagels were brought to this country by Jewish immigrants from Poland who mainly established homes in and around New York City.

9. The U.N.’s Hammarskjöld DAG
Dag Hammarskjold was the second secretary-general of the United Nations, right up until his death in a plane crash in Rhodesia in 1961. The crash was considered suspicious at the time as the bodyguards were found to have bullet wounds when they died, but this was put down to bullets exploding in the fire after the crash.

12. First female professor at the University of Paris MARIE CURIE
Marie Curie lived a life of firsts. She was the first female professor at the University of Paris, the first woman to win a Nobel Prize, and indeed was the first person to win two Nobel prizes. Most of her work was in the field of radioactivity, and was carried out in the days when the impact of excessive radiation on the human body was not understood. She died from aplastic anemia, caused by high exposure to radiation. To this day, Marie’s personal papers are kept preserved in lead-lined boxes as they are highly radioactive, even her personal cookbook.

13. Singer covering “Purple Haze,” probably ACID ROCKER
Acid rock is a musical genre, a subset of psychedelic rock. The term comes from the influence of the drug LSD (acid) on some compositions in the early days.

“Purple Haze” is a 1967 song written and recorded by Jimi Hendrix that has been described as a “psychedelic drug song of the sixties”. In fact, the term “purple haze” came to refer to LSD. Having said that, Hendrix denied any relation of the lyrics to drugs at all.

25. How some bonds are bought AT PAR
Stocks, and other financial vehicles, may be sold “at par”, meaning at the original price, not discounted nor at a premium.

34. Fictional cocker spaniel LADY
“Lady and the Tramp” is a classic animated feature from Walt Disney, released in 1955. Who can forget the scene where the Tramp and Lady are “on a date” and together eat that one strand of spaghetti? So cute!

37. Scottish countryside sight BRAE
“Brae” is a lowland Scots word for the slope or brow of a hill.

39. Sally __ MAE
“Sallie Mae” is a nickname for SLM Corporation, created in 1972 by the US government as the Student Loan Marketing Association. By 2004 the government had severed all its ties with Sallie Mae, and today SLM is basically a profit-focused lender.

45. Utah city OGDEN
Ogden, Utah was the first permanent settlement in what is now the state of Utah by people of European descent.

46. Pulitzer author Alison LURIE
Alison Lurie is an American novelist. Lurie won a Pulitzer Prize in 1985 for her novel “Foreign Affairs”. Three of her works have been adapted for television: “The War Between the Tates”, “Imaginary Friends” and “Foreign Affairs”.

47. Soap containing ground pumice LAVA
Lava is a brand of soap that was introduced as a heavy-duty cleanser in 1983. Unlike like soaps that are marketed using a “soft” image, Lava touts the inclusion of ground pumice that is intended to abrade grime off the skin. Pumice is found in certain types of lava ejected from a volcano, hence the name of the soap.

50. Dots on cartes ILES
In French, islands (îles) are dots on maps (cartes).

51. Work on a proof EDIT
In the world of publishing, one might edit a proof.

54. Inebriate SOT
Our word “sot” comes from the Old English “sott”, meaning a fool. The word “sot” started to be associated with alcohol and not just foolery in the late 1500s.