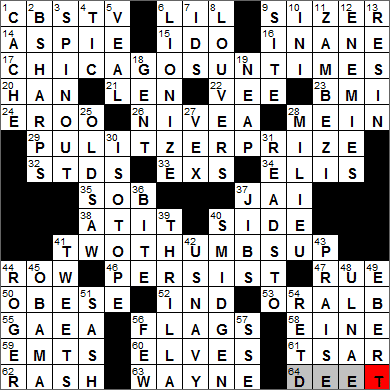 17A. Longtime employer of 44-/49-Down CHICAGO SUN-TIMES
29A. Award won by 44-/49-Down PULITZER PRIZE
41A. Signature 44-/49-Down gesture represented by the clusters of black squares bordering this answer TWO THUMBS UP
41D. “The movies won’t be the same without 44-Down” and others TWEETS
45D. President who wrote the 41-Down quote OBAMA

Today’s Wiki-est, Amazonian Googlies
Across
1. First network to show “The Wizard of Oz” CBS-TV
CBS used to be called the Columbia Broadcasting System. CBS is the second largest broadcaster in the world, second only to the BBC in the UK.

6. Wee, like Abner LI’L
“Li’l Abner” was created and drawn by Al Capp for over 43 years starting in 1934. Al Capp stopped producing the strip in 1977, largely due to illness (he died from emphysema two years later). As the strip finished up, he went so far as to apologize to his long-standing fans, saying that he should have stopped 3-4 years earlier as he felt that the quality of his work had gone down in those latter years.

17. Longtime employer of 44-/49-Down CHICAGO SUN-TIMES
The “Sun-Times” is the oldest continuously published newspaper in Chicago, having been formed in 1948 with the merger of the “Chicago Sun” and the “Chicago Daily Times”.

20. Sci-fi pilot Solo HAN
Han Solo is the space smuggler in “Star Wars” played by Harrison Ford. Ford was originally hired by George Lucas just to read lines for actors during auditions for “Star Wars”, but over time Lucas became convinced that Ford was right for the pivotal role of Han Solo.

21. Novelist Deighton LEN
I used to walk my dog right past author Len Deighton’s house years ago, as we lived in the same village in Ireland (probably my only claim to fame!). Deighton wrote the excellent espionage thriller “The IPCRESS File”, made into a 1965 movie starring Michael Caine.

22. Geese formation VEE
Apparently geese fly in a V-formation for a couple of reasons. One is that it makes for efficient flight and conserves energy. The leading bird gets no advantage, but every following bird gets to “slipstream” a little. It has been noted that the lead bird drops to the back of the formation when he/she gets fatigued. It’s also thought that the flock can stick together more easily when in formation, so it is more difficult to lose someone along the way.

29. Award won by 44-/49-Down PULITZER PRIZE
Pulitzer Prizes are awarded annually for achievements in journalism, literature and musical composition. The prize was established back in 1917 by the Hungarian-American newspaper publisher Joseph Pulitzer. Pulitzer left money in his will for the prize, and for its administration by Columbia University.

32. MPAA criteria, e.g. STDS
The Motion Picture Association of America’s (MPAA) film-rating system (R, PG-17, G etc.) is purely voluntary and is not backed by any law. Movie theaters agree to abide by the rules that come with the MPAA ratings in exchange for access to new movies.

33. George Strait’s “All My __ Live in Texas” EX’S
George Strait is a country music singer, known as the “King of Country”. The monker seems to be well deserved as Strait has had more number one hits on Billboard’s list of HOt Country Songs than any other artist.

37. __ alai JAI
Even though jai alai is often said to be the fastest sport in the world because of the speed of the ball, in fact golf balls usually get going at a greater clip.

40. Hypotenuse, e.g. SIDE
The hypotenuse is the longest side of a right-angled triangle.

41. Signature 44-/49-Down gesture represented by the clusters of black squares bordering this answer TWO THUMBS UP
The film review TV show “At the Movies” has been around since 1988 in various forms with various hosts, most famously Gene Siskel and Robert Ebert. Siskel and Ebert used the iconic “thumbs up and thumbs down” rating system from the first show.

44. Cox’s command ROW
The coxswain of a boat is one in charge, particularly of its steering and navigation. The name is shortened to “cox” particularly when used for the person steering and calling out the stroke in a competition rowing boat.

52. Hoosier St. IND
The exact origin of the word “Hoosier” is unknown, but has been around since at least 1830. The term had no direct linkage with Indiana until John Finley of Richmond, Indiana wrote a poem called “The Hoosier’s Nest” in 1833. A few years later by 1840 it was generally accepted as a term for Indiana residents.

53. Dental care brand ORAL-B
The Oral-B toothbrush was introduced to the world in 1950, designed by a California periodontist. The first “model” was the Oral-B 60, a name given to reflect the 60 tufts in the brush. In 1969, the Oral-B was the first toothbrush to get to the moon as it was the toothbrush of choice for the crew of the Apollo 11 spacecraft.

55. Mother of the Titans GAEA
The Greek goddess personifying the earth was Gaea (meaning “land” or “earth” in Greek). The Roman equivalent goddess was Terra Mater, “Mother Earth”.

56. Half-mast fliers, at times FLAGS
Some say that flags are flown at “half-mast” as a sign of respect or mourning in order to leave room for “the invisible flag of death” that flies at the top of the flagpole.

58. Berlin article EINE
Berlin is the capital and largest city in Germany, and is the second most populous city in the European Union (after London).

Our word “ambulance” originated in the French term “hôpital ambulant” meaning field hospital (literally “walking hospital”). In the 1850s, the term started to be used for a vehicle transporting the wounded from the battlefield, leading to our “ambulance”.

61. Ivan the Terrible, e.g. TSAR
The Grand Prince of Moscow, Ivan IV, became known as Ivan the Terrible. The name “terrible” is a translation from Russian, and perhaps creates the wrong impression about the man. The Russian word is “Grozny”, which is more akin to “strict” and “powerful” rather than “cruel” or “abominable”.

63. Bruce better known as Batman WAYNE
Bruce Wayne is the secret identity of Batman in the comic series created by DC Comics. The first name of Bruce was chosen as a homage to the Scottish king and heroic figure, Robert the Bruce. The family name was a nod to “Mad Anthony” Wayne, the US Army general and statesman who rose to prominence in the Revolutionary War.

64. Bug-bugging compound DEET
DEET is short for N,N-Diethyl-meta-toluamide, an active ingredient in insect repellents. DEET is most often used to repel mosquitoes by applying it to the skin and/or clothing. It is also used to protect against tick bites.

Down
3. Daytona 500 mishap SPINOUT
The Daytona 500 is the event with the largest purse on the NASCAR calendar.

5. Wiener schnitzel meat VEAL
Schnitzel is an Austrian dish made from slices of meat that have been tenderized and thinned with a wooden mallet, and then coated in breadcrumbs and fried. The variant known as Wiener Schnitzel (i.e. Viennese schnitzel) is usually made from veal, although now that veal had fallen into disfavor due to concerns about animal rights, it is often made from pork.

6. Treat like a king LIONIZE
The term “lionize” dates back to the late 1700s when there were lions kept in the Tower of London. The lions were quite famous, and attracted many visitors. Hence the term “lionize” means to treat someone as a celebrity.

9. imdb.com, e.g. SITE
The website called the Internet Movie Database (IMDb) was launched in 1990, and is now owned by Amazon.com. It’s a great site for answering question one has about movies and actors.

11. River along the Zambia-Zimbabwe border ZAMBEZI
The Zambezi is the largest African river flowing into the Indian Ocean, and the fourth-longest river on the continent. The most famous spot along the river is Victoria Falls.

28. Social sphere MILIEU
We use the French word “milieu” to mean an environment, surroundings. In French, “milieu” is the word for “middle”.

36. Mark from Dracula BITE
“Dracula” is a novel written by the Irish author Bram Stoker, and first published in 1897. Dracula wasn’t the first vampire of literature, but he certainly was the one who spawned the popularity of vampires in theater, film and television, and indeed more novels. Personally, I can’t stand vampire fiction …

39. Manila fight nickname THRILLA
Muhammad Ali and Joe Frazier had three memorable fights. The first was billed as the “Fight of the Century” and took place in 1971 in Madison Square Garden. It was a fight between two great boxers, both of whom were undefeated up till that point. Frazier won in a unanimous decision after fifteen rounds. A couple of years later, in 1973, Frazier lost his title to George Foreman. Ali and Frazier had a non-title rematch in 1974, with Ali coming out ahead this time, also in a unanimous decision. Later that year, Ali grabbed back the World Heavyweight Title in “The Rumble in the Jungle”, the famous “rope-a-dope” fight against George Foreman. That set the stage for the third and final fight between Ali and Frazier, “The Thrilla in Manila”. Ali won the early rounds, but Frazier made a comeback in the middle of the fight. Ali took control at the end of the bout, so much so that Frazier wasn’t able to come out of his corner for the 15th and final round. He couldn’t come out of his corner because both of his eyes were swollen shut, giving Ali a victory due to a technical knockout (TKO).

40. Tiny bit SMIDGEN
Our word “smidgen”, meaning a small amount, might come from the Scots word “smitch” that means the same thing or “a small insignificant person”.

41. “The movies won’t be the same without 44-Down” and others TWEETS
(45. President who wrote the 41-Down quote OBAMA)
I have never tweeted in my life, and have no plans to do so. Twitter is a microblogging service that limits any post sent to just 140 characters. In a sense, it is similar to this blog. Here I send out a post once a day containing information that I think might be useful to folks (thank you for reading!). I don’t think I could send out much of interest using just 140 characters. I believe that many people who do tweet tend to send out messages like “I’m at dinner now. I am having sushi” and “There’s nothing on TV. I’m bored”. Nope, I don’t think so!

42. SEALs’ gp. US NAVY
SEAL is an acronym used by the US Navy’s SEa, Air and Land teams. The SEALs were born out of the Navy’s special warfare groups from WWII, like the Underwater Demolition Teams and the Motor Torpedo Boat Squadrons. The Navy SEAL unit was established soon after President Kennedy’s famous speech in which he announced the plan to put a man on the moon, as in the same speech the president allocated $100m of funding to strengthen special operations forces. The Navy used some of this money to set up guerrilla and counter-guerrilla units, which soon became the SEALs.

43. Eulogize PRAISE
A eulogy is a speech or piece of writing that praises someone who has recently passed away or who is retiring. “Eulogy” comes from the Greek word “eulogia” meaning “praise”.

44. With 49-Down, late film critic born 6/18/42 ROGER
(49. See 44-Down EBERT)
Roger Ebert co-hosted a succession of film review television programs for over 23 years, most famously with Gene Siskel until Siskel passed away in 1999. Ebert was diagnosed and treated for thyroid cancer in 2002, and finally succumbed to a recurrence of the disease in April 2013.