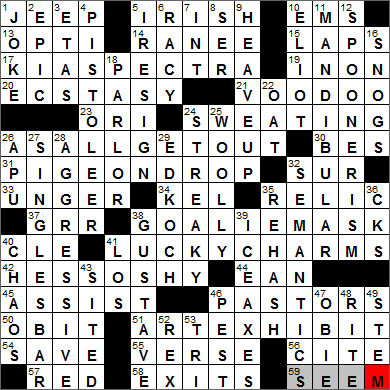 Today’s Wiki-est, Amazonian Googlies
Across
1. General transportation? JEEP
The Jeep is the original off-road vehicle. It was developed by the American Bantam Car Company in 1940 at the request of the US government who recognized the upcoming need for the armed forces as American involvement in WWII loomed. The Bantam Company was too small to cope with demand, so the government gave the designs to competing car companies. The design and brand eventually ended up with AMC in the seventies and eighties.

21. Focus of a historic New Orleans museum VOODOO
Voodoo is a religion that originated in the French slave colony of Saint-Domingue on the Caribbean island of Hispaniola.

Or I shall live your epitaph to make,
Or you survive when I in earth am rotten;
From hence your memory death cannot take,
Although in me each part will be forgotten.
Your name from hence immortal life shall have,
Though I, once gone, to all the world must die:
The earth can yield me but a common grave,
When you entombed in men’s eyes shall lie.
Your monument shall be my gentle verse,
Which eyes not yet created shall o’er-read,
And tongues to be your being shall rehearse
When all the breathers of this world are dead;
You still shall live–such virtue hath my pen–
Where breath most breathes, even in the mouths of men.

31. Sleight-of-hand swindle PIGEON DROP
In the confidence trick known as a “pigeon drop”, the victim (the pigeon) is fooled into putting his or her money into say an envelope along with a sum provided by the trickster. The envelope is switched for an envelope stuffed with perhaps newspaper. The victim usually takes the opportunity to sneak off with the supposed money, but is actually sneaking off with nothing and leaving the trickster a handsome profit.

33. ’70s TV character name whose original Broadway spelling had an “a” instead of an “e” UNGER
In the Neil Simon play “The Odd Couple”, the character Felix has the family name “Ungar”. This spelling “Ungar” persists in the film adaptation but somehow morphed into “Unger” for the long-running television series.

“The Odd Couple” is a play by the wonderfully talented Neil Simon first performed on Broadway, in 1965. This great play was adapted for the big screen in 1968, famously starring Jack Lemmon (as Felix Unger) and Walter Matthau (as Oscar Madison). The success of the play and the film gave rise to an excellent television sitcom that ran from 1970-1975, starring Tony Randall and Jack Klugman. In 1985, Neil Simon even went so far as to adapt the play for an all-female cast, renaming it “The Female Odd Couple”. I’d like to see that one …

40. The Tribe, on scoreboards CLE
The Cleveland baseball franchise started out in 1869 as the Forest Citys named after “Forest City”, which is the nickname for Cleveland. After a number of transitions, in 1914 the team took on the name “Indians”. The media came up with name “Indians” after being asked for suggestions by the team owners. “Indians” was inspired by the successful Boston team of the day, the Boston Braves.

42. 1980 hit with the lyric “It took a long time to know him” HE’S SO SHY
“He’s So Shy” is a 1980 hit for the Pointer Sisters. Although the title is reminiscent of the 1963 hit for the Chiffons called “He’s So Fine”, there is no relationship between the two numbers.

44. End for Caesar -EAN
The story that Julius Caesar was born via a Caesarean section seems be unfounded. Although such procedures were indeed carried out in Ancient Rome there are no reports of the mother surviving (and Julius Caesar’s mother did raise her child).

45. Scrub in, say ASSIST
“To scrub in” is to wash the hands and forearms thoroughly, perhaps in preparation for surgery.

46. Service providers PASTORS
The term “pastor” that is used for a minister of the church comes from the Latin word for “shepherd”.

50. Where to find an expiration date? OBIT
“Obituary” comes from the Latin “obituaris”, originally the record of the death of a person, although the literal meaning is “pertaining to death”.

51. Curator’s event ART EXHIBIT
The term “curator” is Latin and applies to a manager, guardian or overseer. In English, the original curators were the guardians and overseers of minors and those with mental disease.

55. Frost bit? VERSE
The wonderful poet Robert Frost was a native of San Francisco. Frost was well recognized for his work during his lifetime, and received four Pulitzer Prizes for Poetry.

57. Bench, once RED
Johnny Bench is a former Major League Baseball catcher who played for the Cincinnati Reds. Bench is now a spokesman for the Stryker Corporation, makers of medical implants. After a career as a baseball catcher, his natural hip joint was in bad shape and so he had very successful replacement surgery in 2004. Bench isn’t just a spokesman for Stryker, he’s a customer.

Down
3. DFW postings ETAS
Dallas/Fort Worth Airport is the largest hub for American Airlines, and is also the fourth busiest airport in the world in terms of aircraft landings and takeoffs (Atlanta is the world’s busiest, followed by Chicago O’Hare and Los Angeles international).

4. Wild Bill Hickok, notably PISTOLEER
In 1876, Wild Bill Hickok was playing poker in a saloon in the town of Deadwood in the Black Hills in the Dakota Territory. For once, the gunfighting lawman was sitting with his back to the door, something he almost always avoided. He had twice tried to change seats to give him a view of the door, but his card-playing comrades weren’t obliging. An enemy of Wild Bill’s named Jack McCall then was able to enter the saloon without being noticed. He walked up to the table and shot Hickok in the back of the head, killing him instantly. The hand that Hickok was holding contained four black cards, two aces and two eights. Since the killing, black aces and eights in a poker hand have been referred to as the “dead man’s hand”.

10. Economist Janeway ELIOT
Eliot Janeway was an economist and an advisor to Presidents Franklin D. Roosevelt and Lyndon B. Johnson.

11. Lower jaw-related MANDIBULAR
The mandible is the lower jaw, also called “the jawbone”.

12. Hated the book, perhaps SPOONERISM
Spoonerisms are errors in speech in which letters or sounds are switched from one word to another. Famous examples are “Three cheers for our queer old dean” (dear old Queen … Victoria) and “Is it kisstomary to cuss the bride?” (customary to kiss). Spoonerisms are named after an Oxford don, William Archibald Spooner, who was notorious for his tendency to pepper his speech with “spoonerisms”.

Hated the book” is a spoonerism for “baited the hook”.

Birmingham is a city in the English midlands that has the largest population of any British city outside of London.

26. Toon shopkeeper voiced by Hank Azaria APU
The fictional Kwik-E-Mart store is operated by Apu Nahasapeemapetilon on “The Simpsons” TV show. The convenience store owner doesn’t seem to be making much use of his Ph.D in computer science that he earned in the US. Apu’s undergraduate degree is from Caltech (the Calcutta Technical Institute), where he graduated top of his class of seven million students …

“Madame Bovary” is the most famous novel written by Gustave Flaubert. The title character is a doctor’s wife, Emma Bovary, who lives a luxurious life beyond her means, and has many adulterous affairs. The novel had a rousing reception, first being attacked by public prosecutors as obscenity, which I am sure later helped it to become a bestseller.

40. Bedlam CHAOS
Bethlem Royal Hospital is a facility in London in the UK for treating mental illness. The original facility was a hospital way back in the 1300s, and had the name “Bedlam”. In the 1700s and 1800s the hospital actually made money out of its patients as it charged a penny to members of the public allowing them to visit the hospital and view the unfortunate inmates in their cells. Tens of thousands of such paid visits were made each year. Our word “bedlam” meaning uproar and confusion is derived from the hospital’s name, and it reflects the cruel and inhumane treatment endured by the inmates in days gone by.

41. __ Altos, California LOS
Los Altos is a wealthy city located not far from here, and is a largely residential community serving Silicon Valley and San Francisco. “Los Altos” is Spanish for “the heights”.

47. Stage presentation? OBIE
The Obies are the “Off-Broadway Theater Awards”. The Obies are presented annually and the recipients are chosen by “The Village Voice” newspaper.

52. Excitable dinosaur in “Toy Story” REX
1995’s “Toy Story” was the world’s first feature-length computer-animated movie. “Toy Story” was also the studio Pixar’s first production. The main roles in the film are Woody and Buzz, voiced by Tom Hanks and Tim Allen respectively. Hanks was the first choice to voice Woody, Allen was asked to voice Buzz after Billy Crystal turned down the role.

53. TNT part TRI-
TNT is an abbreviation for trinitrotoluene. Trinitrotoluene was first produced in 1863 by the German chemist Joseph Wilbrand, who developed it for use as a yellow dye. TNT is relatively difficult to detonate so it was on the market as a dye for some years before its more explosive properties were discovered.