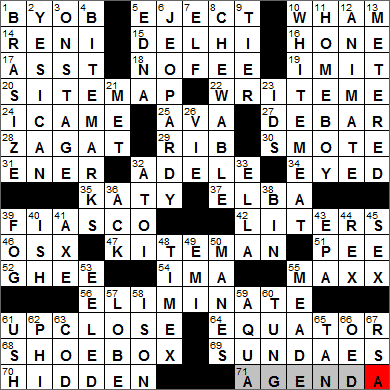 CROSSWORD SETTER: Erik Agard
THEME: Hidden Agenda … today’s themed answers each have a hidden ITEM, as would be on a HIDDEN AGENDA:

70A. With 71-Across, what the answers to starred clues contain? HIDDEN
71A. See 70-Across AGENDA

10. ’80s pop duo with an exclamation point in its name WHAM!
I just found out that the eighties pop duo that we knew on the other side of the Atlantic as Wham! were better known as Wham! UK in North America. Apparently there already was a band called Wham! here in the US. Wham! UK was composed of singers George Michael and Andrew Ridgeley. George Michael made it big as a solo artist after the pair broke up, but Ridgeley kind of faded into obscurity, relatively speaking.

14. Renaissance painter Guido RENI
Guido Reni was an Italian painter from Bologna who was active in the first half of the 17th century. Reni painted in the high-Baroque style and is noted for his works on display in the churches of Bologna, Rome and Naples.

24. Start of a boast I CAME
The oft-quoted statement “Veni, vidi, vici” (“I came, I saw, I conquered”) is believed by many to have been written by Julius Caesar. The words date back to 47 BC and refer to the short war between Rome and Pharnaces II of Pontus.

28. Restaurant survey creator ZAGAT
The Zagat Survey is best known for rating restaurants across the major cities of the US, but it also rates things like hotels, nightlife, shopping, airlines and even zoos. The survey was started by Tim and Nina Zagat in 1979, and back then the survey was simply a collection of New York City restaurant ratings provided by friends of the couple.

31. Steven Chu’s Cabinet dept. ENER
Steven Chu is the Secretary of Energy in the Obama Cabinet. Chu is a physicist by trade, a winner of the Nobel Prize in Physics in 1997. Chu has notified President Obama that he will resign as soon as a replacement is chosen.

32. Mononymous “Rumour Has It” singer ADELE
The English singer Adele Adkins goes by the stage name “Adele”. Adele describes her musical style as “heartbroken soul”. Not too long ago, Adele wrote and performed the theme song for the latest James Bond film, “Skyfall”.

35. “Firework” singer Perry KATY
Katy Perry is an American singer who grew up listening to and singing gospel music, as she was the daughter of two Christian pastors. In fact, her first musical release was a gospel album in 2001. She has branched out since then. Her first successful single was “Ur so Gay”, followed by “I Kissed A Girl”. She was married (only for a year) to the hilarious British comedian Russell Brand until 2012.

37. Exile isle ELBA
I had a lovely two-week vacation in Tuscany once, including what was supposed to be a two-night stay on the island of Elba. I had envisioned Elba as a place full of history, and maybe it is, but it is also overrun with tourists who use it as a beach getaway. We left after one day and we won’t be going back again …

46. Mac interface OS X
Apple introduced the Mac OS X Operating System in 2000. Each version of this operating system has had a code name, and that code name is always a type of big cat. The versions and code names are:

Interestingly, the earlier beta version was called Kodiak, after the bear, and not a cat at all.

47. *Comics supervillain whose real name is Charles Brown K(ITE M)AN
Kite Man is a supervillain in the world of comics. Kite Man’s alterego was chosen as Charles Brown, a homage to the kite-flying Charlie Brown in the comic strip “Peanuts”.

55. Retailer T.J. ___ MAXX
T.J. Maxx is a chain of department stores in the US, with outlets in Europe as well. Over in the UK however, the stores are known as T.K. Maxx.

61. Personal partner? UP CLOSE
Up close and personal …

69. Ice cream treats SUNDAES
There’s a lot of speculation about how the dessert called a sundae got its name, but there seems to be agreement that it is an alteration of the word “Sunday”.

Down
1. Lingerie spec BRA SIZE
“Lingerie” is a French term, but as used in France it just means any underwear, worn by either males or females. In English we use “lingerie” to describe alluring underclothing worn by women. The term “lingerie” comes into English via the French word “linge” meaning “washables”, and ultimately from the Latin “linum”, meaning “linen”. We tend not to pronounce the word correctly in English, either here in the US or across the other side of the Atlantic. The French pronunciation is more like “lan-zher-ee”, as opposed to “lon-zher-ay” (American) and “lon-zher-ee” (British).

5. Flamboyant Dame EDNA
Dame Edna Everage is the outrageous character created and played by Australian comedian Barry Humphries. I saw him/her perform live in a San Francisco theater, and what a great show it was.

6. Where to find a lot of answers? JEOPARDY
“Jeopardy” first went on the air in 1964, and is another successful Merv Griffin creation. But it took the introduction of Alex Trebek as host in order to bring the show into the big times. Trebek has been host since 1984.

13. Like most cabs METERED
We call cabs “taxis”, a word derived from “taximeter cabs” that were introduced in London in 1907. A taximeter was an automated meter designed to record distance travelled and fare to be charged. The term “taximeter” evolved from “taxameter”, with “taxa” being Latin for “tax, charge”.

32. Yours, in Tours A TOI
Tours is the largest city in the Centre region of France. It is said that the people of Tours speak the “purest” form of French in the whole country, and when spoken by a local it is also said to be free of any accent.

33. Big name in scat ELLA
Ella Fitzgerald, the “First Lady of Song”, had a hard and tough upbringing. She was raised by her mother alone in Yonkers, New York. Her mother died while Ella was still a schoolgirl, and around that time the young girl became less interested in her education. She fell in with a bad crowd, even working as a lookout for a bordello and as a Mafia numbers runner. She ended up in reform school, from which she escaped, and found herself homeless and living on the streets for a while. Somehow Fitzgerald managed to get herself a spot singing in the Apollo Theater in Harlem. From there her career took off and as they say, the rest is history.

43. Green org. EPA
The Environmental Protection Agency (EPA) was set up during the Nixon administration and began operation at the end of 1970.

44. T. __ REX
The Tyrannosaurus rex (usually written T. rex) was a spectacular looking dinosaur. “Tyrannosaurus” comes from the Greek words “tyrannos” (tyrant) and “sauros” (lizard), and the “rex” is of course Latin for “king”. They were big boys, measuring 42 feet long and 13 feet tall at the hips, and weighing 7.5 tons.

48. “It takes a licking …” watch TIMEX
The Timex Group, the manufacturer of watches, evolved from the Waterbury Clock Company that was founded in 1854 in Waterbury, Connecticut. The company achieved tremendous success in the early sixties largely due to an innovative marketing campaign. Advertisements featured the memorable tagline “Timex – Takes a licking and keeps on ticking”. In 1962, one out of every three watches sold in the US was a Timex.

49. U.K. record label EMI
EMI is a British music company, with the acronym originally standing for Electric and Musical Industries.

53. Sought morays EELED
Morays are a large group of about 200 species of eels found across the world’s oceans. Morays are carnivorous and look pretty scary but they’re quite shy when confronted and generally present no threat to humans. One interesting thing about morays is that they will sometimes work in cooperation with the grouper fish found in reefs, the two helping each other hunt for food.

55. Gettysburg general MEADE
George Meade was a career army officer with a depth of experience in civil and military operations even before the onset of the Civil War. During the war he rose to the level of commander of the Army of the Potomac, and is best remembered for leading the Union forces that defeated General Robert E. Lee at Gettysburg in 1863.

60. Mao Tse-__ TUNG
Mao Zedong was born on December 16, 1893 in the Hunan Province of China. As Mao was the son of a peasant farmer, his prospects for education were limited. Indeed he left school at age 13 to work on the family farm but did eventually get to secondary school in Changsha, the provincial capital. In the years following, Mao continued his education in Beijing and actually turned down an opportunity to study in France.

63. Fish-and-chips fish COD
In the British Isles, the most common fish that is used in traditional “fish and chips” is Atlantic cod. Cod has been overfished all over the world, and is now considered to be an endangered species by many international bodies.

66. Where age always goes before beauty, briefly OED
The “Oxford English Dictionary” (OED) contains over 300,000 “main” entries and 59 million words in total. It is said it would take a single person 120 years to type it out in full. The longest entry for one word in the second edition of the OED is the verb “set”. When the third edition was published in 2007, the longest entry for a single word became the verb “put”. Perhaps not surprisingly, the most-quoted author in the OED is William Shakespeare, with his most quoted work being “Hamlet”. The most-quoted female author is George Eliot (aka Mary Ann Evans).

67. The ANC’s country RSA
The Republic of South Africa (RSA).