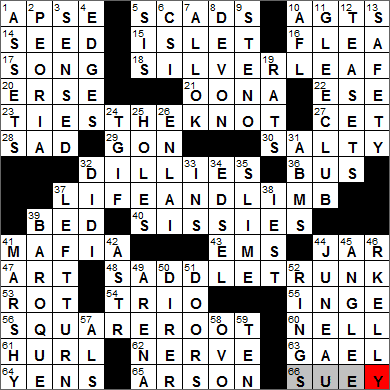 18A. Thin, decorative metal SILVER LEAF
23A. Gets married TIES THE KNOT
37A. Dangerous things to risk LIFE AND LIMB
48A. Equestrian’s supply box SADDLE TRUNK
56A. One, to one, e.g. SQUARE ROOT

Today’s Wiki-est, Amazonian Googlies
Across
1. Cathedral area APSE
The apse of a church or cathedral is a semicircular recess in an outer wall, usually with a half-dome as a roof and often where there resides an altar. Originally apses were used as burial places for the clergy and also for storage of important relics.

5. Tons SCADS
The origin of the word “scads”, meaning “lots and lots”, is unclear, although back in the mid-1800s “scads” was used to mean “dollars”.

21. The last Mrs. Chaplin OONA
Oona O’Neill dated J. D. Salinger and Orson Welles in her teens, but ended up marrying Charlie Chaplin. Oona was still pretty young when she married Chaplin, much to the dismay of her famous father, the playwright Eugene O’Neill. After the marriage Eugene disowned Oona as he was pretty upset about 54-year-old Chaplin marrying his 18-year-old daughter.

32. Lulus DILLIES
A dilly is something or someone excellent.

36. Mass transit carrier BUS
We use the term “bus” for a mode of transportation, an abbreviated form of the original “omnibus”. We imported “omnibus” via French from Latin, in which language it means “for all”. The idea is that an omnibus is a “carriage for all”.

41. Underworld group MAFIA
Apparently “Cosa Nostra” is the real name for the Italian Mafia. “Cosa Nostra” translates as “our thing” or “this thing of ours”. The term first became public in the US when the FBI managed to turn some members of the American Mafia. The Italian authorities established that “Cosa Nostra” was also used in Sicily when they penetrated the Sicilian Mafia in the 1980s. The term “mafia” seems to be just a literary invention that has become popular with the public.

43. Printer’s widths EMS
In typography, there are em dashes and en dashes. The em dash is about the width of an “m” character, and an en dash about half that, the width of an “n’ character. An en dash is used, for example, to separate numbers designating a range, as in 5-10 years. The em dash seems to be going out of style, and indeed the application I am using to write this paragraph won’t let me show you one!

47. Renoir output ART
Pierre-Auguste Renoir was a French painter, very much at the forefront of the Impressionist movement. Renoir was a prolific artist, with several thousand works attributed to him. The largest collection of Renoirs is actually in the United States. You can see 181 of his paintings at the Barnes Foundation just outside Philadelphia.

48. Equestrian’s supply box SADDLE TRUNK
A saddle trunk is a container large enough to hold a saddle, as well as other items need for horseriding.

54. Alabama, but not Kansas? TRIO
Alabama is a band from Fort Payne, Alabama who perform a blend of country music and southern rock.

Kansas is a progressive rock band from Topeka. Kansas had some hits in the seventies.

55. “Picnic” playwright INGE
Playwright William Inge had a run of success on Broadway in the early fifties. Inge’s most celebrated work of that time was the play “Picnic”, for which he was awarded a Pulitzer Prize. The original 1953 cast of “Picnic” included a young male actor making his debut on Broadway. His name was Paul Newman.

56. One, to one, e.g. SQUARE ROOT
One is the square root of one, because one squared is one.

60. “Ain’t Misbehavin'” Tony winner Carter NELL
Nell Carter was a singer and actress from Birmingham, Alabama. Carter won a Tony for her performance on Broadway in “Ain’t Misbehavin’”. She also starred in the TV sitcom “Gimme a Break!” in the 1980s.

63. Hebrides native GAEL
Gaels are speakers of one of the three Gaelic Celtic languages of Irish, Scottish and Manx.

64. Desires YENS
The word “yen”, meaning “urge”, has been around in English since the very early 1900s. It comes from the earlier word “yin” imported from Chinese, which was used in English to describe an intense craving for opium!

66. Chop __: Chinese American dish SUEY
Many believe that the Chinese dish known as chop suey was invented in America, by Chinese immigrants. In fact, by the time it showed up in the US it already existed in the Taishan district of Guangdong in southeast China, the origin of many of those immigrants. “Chop suey” translates as “assorted pieces”, and is made up of some meat and eggs quickly cooked with vegetables in a thickened sauce.

Down
2. Illinois city that symbolizes Middle America PEORIA
Peoria is the oldest European settlement in the state of Illinois, having been settled by the French in 1680. The city is famous for being cited as “the average American city”. The phrase, “Will it play in Peoria?” is used to mean, “Will it appeal to the mainstream?” It is believed the expression originated as a corruption of, “We shall play in Peoria”, a line used by some actors in the 1890 novel “Five Hundred Dollars” by Horatio Alger, Jr.

6. CBS drama with two spin-offs CSI
The “CSI” franchise of TV shows has been tremendously successful, but seems to be winding down. “CSI: Miami” (the “worst” of the franchise, I think) was cancelled in 2012 after ten seasons. “CSI: NY” (the “best” of the franchise) was cancelled in 2013 after nine seasons. The original “CSI: Crime Scene Investigation”, set in Las Vegas, is still going strong and has been doing so since 2000.

8. Exeter’s county DEVON
Devon is a county in the southwest of England. The county town of Devon is Exeter, and the largest city in the county is Plymouth, the port from which the Mayflower Pilgrims departed.

9. Dictation whiz STENO
Stenography is the process of writing in shorthand. The term comes from the Greek “steno” (narrow) and “graphe” (writing).

10. The K.C. Chiefs represented it in Super Bowl I AFL
Super Bowl I was played in January 1967 between the Green Bay Packers and the Kansas City Chiefs. The Packers emerged victorious in a game with a score of 35-10. That game was officially known as the AFL-NFL Championship Game, as the name “Super Bowl” wasn’t applied until two seasons later. That “first” Super Bowl is now known as Super Bowl III and was played between the New York Jets and the Baltimore Colts. The Jets came out on top.

11. High school choral group GLEE CLUB
A glee club is a choir group, usually of males, that sings short songs known as “glees”. A glee is a song scored for three or more voices that is performed unaccompanied.

19. Pied Piper followers RATS
The legend of the Pied Piper of Hamelin dates back to medieval times. Recently there have been suggestions that the story is rooted in some truth, that the town of Hamelin did in fact lose many of its children, perhaps to plague. The suggestion is that the tale is an allegory.

24. End-of-the-workweek cry TGIF
“Thank God It’s Friday” (TGIF) is a relatively new expression that originated in Akron, Ohio. It was a catchphrase used by disk jockey Jerry Healy of WAKR in the early seventies.

25. Pebble Beach’s 18 HOLES
Pebble Beach Golf Links, located just south of Monterey, California, is a public course. It was the first public golf course to be chosen as the top course in the country by “Golf Digest”.

26. China’s Zhou __ ENLAI
Zhou Enlai (also Chou En-Lai) was the first government leader of the People’s Republic of China and held the office of Premier from 1949 until he died in 1976. Zhou Enlai ran the government for Communist Party Leader Mao Zedong, often striking a more conciliatory tone with the West than that of his boss. He was instrumental, for example, in setting up President Nixon’s famous visit to China in 1972. Zhou Enlai died just a few months before Mao Zedong, with both deaths leading to unrest and a dramatic change in political direction for the country.

There were two rounds of Strategic Arms Limitation Talks (SALT) between the US and the Soviet Union, and two resulting treaties (SALT I & SALT II). The opening round of SALT I talks were held in Helsinki as far back as 1970.

34. ’50s automotive failure EDSEL
The Edsel brand of automobile was named for Edsel, son of Henry Ford. Sadly, the name “Edsel” has become synonymous with “failure”, which was no fault of Edsel himself who had died several years before the Edsel line was introduced.

39. Like Bach’s music BAROQUE
The musical era known as the Baroque started about 1600 and ended about 1730 with the ushering in of the Classical period. Famous composers associated with the Baroque style were Claudio Monteverdi, Antonio Vivaldi, George Frideric Handel and of course Johann Sebastian Bach.

44. Alaskan capital JUNEAU
Given that it’s the capital of the vast state of Alaska, it is perhaps not surprising to learn that the municipality of Juneau is almost as big as the area of the states of Rhode Island and Delaware combined, and yet has only a population of about 31,000 people!

“Crouching Tiger, Hidden Dragon” is a film with Mandarin dialogue that was released in the year 2000. The movie was made on the relatively meagre budget of $17 million, and yet earned over $125 million in the US alone. It is in fact the highest-grossing foreign-language film in American history.

46. “I Believe I Can Fly” singer R KELLY
R. Kelly is the stage name of R&B singer Robert Kelly from Chicago. R. Kelly was named by “Billboard” as the most successful R&B singer in the past 25 years, and so I guess he has earned his nickname “King of R&B”. Kelly ran into some problems in the press when it was revealed that he had married singer Aaliyah when she was just 15 and Kelly was 27-years-old.

57. Gore and Green ALS
Al Gore was born in Washington DC and was the son of Al Gore, Sr., then a US Representative for the state of Tennessee. After deferring his military service in order to attend Harvard, the younger Gore became eligible for the draft on graduation. Many of his classmates found ways of avoiding the draft, but Gore decided to serve and even took the “tougher” option of joining the army as an enlisted man. Actor Tommy Lee Jones shared a house with Gore in college and says that his buddy told him that even if he could find a way around the draft, someone with less options than him would have to go in his place and that was just wrong.

Al Green is a gospel and soul music singer. Green was born in Arkansas, where he started out as a gospel singer and moved into R&B. In 1974, he was assaulted by a girlfriend who burned him badly on much of his body by pouring boiling grits over him (and then she committed suicide). The incident changed Green’s life and he turned to the church, becoming a pastor in Memphis in 1976. He continued to record music, but never really enjoyed the same success that he had in the early seventies with hits like “Let’s Stay Together” and “I’m Still In Love With You”.

58. Lacto-__ vegetarian OVO
A lacto-ovo vegetarian is someone who does not consume meat or fish, but does eat eggs (ovo) and dairy (lacto) products.