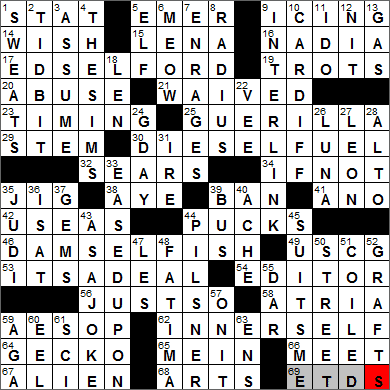 CROSSWORD SETTER: Steven J. St. John
THEME: Inner Self … each of today’s theme answers has the word “SELF” inside it:

Today’s Wiki-est, Amazonian Googlies
Across
1. “Now!” in the ICU STAT
The exact etymology of “stat”, a term meaning “immediately” in the medical profession, seems to have been lost in the mists of time. It probably comes from the Latin “statim” meaning “to a standstill, immediately”. A blog reader has helpfully suggested that the term may also come from the world of laboratory analysis, where the acronym STAT stands for “short turn-around time”.

15. Actress Olin LENA
The lovely Lena Olin is a Swedish actress, clearly someone who has acting in her blood. Olin’s mother was the actress Britta Holmberg and her father the actor and director Stig Olin. Lena Olin had a very successful career in Sweden, often working with the great Ingmar Bergman. Olin’s breakthrough international and English-speaking role was playing opposite Daniel Day-Lewis in “The Unbearable Lightness of Being” released in 1988. Way back in 1974, the lovely Miss Olin was crowned Miss Scandinavia in a beauty pageant for Nordic women held in Helsinki, Finland.

16. 1976 Olympics star Comaneci NADIA
Nadia Comaneci won three golds in the 1976 Summer Olympics and was the first gymnast to be awarded a perfect score of a ten in the gymnastics competition. Comaneci published a book called “Letters to a Young Gymnast” in 2003, and now lives in the United States.

17. Eponymous son of auto pioneer Henry EDSEL FORD
It was Henry Ford’s son Edsel who gave his name to the Edsel brand of automobile, a name that has become synonymous with “failure”.

25. Kind of warfare or fighter GUERILLA
Guerrilla (also “guerilla”) warfare is a type of fighting engaged in by irregular forces using ambushes and sabotage. The term “guerrilla” is Spanish for “little war”.

32. Catalog biggie SEARS
Richard Sears was a station agent on the railroad. In the late 1800s, he bought up a shipment of unwanted watches that was left at his depot and sold the watches to other agents up and down the line. He was so successful that he ordered more watches and then came up with the idea of using a catalog to promote more sales. The catalog idea caught on, and by the mid 1900s Sears was the biggest retailer in the whole country.

49. Shoreline protection gp. USCG
The US Coast Guard (USCG) has the distinction of being the country’s oldest continuous seagoing service. The USCG was founded as the “Revenue Cutter Service” by Alexander Hamilton in 1790.

58. Open-air lobbies ATRIA
In modern architecture an atrium is a large open space, often in the center of a building and extending upwards to the roof. The original atrium was an open court at the middle of an Ancient Roman house. One could access most of the enclosed rooms of the house from the atrium.

59. Ancient storyteller AESOP
Aesop lived in Ancient Greece, probably around the sixth century BC. Supposedly Aesop was born a slave, somehow became a free man, but then met with a sorry end. He was sent to the city of Delphi on a diplomatic mission but instead insulted the Delphians. Aesop was tried on a trumped-up charge of stealing from a temple, sentenced to death and was thrown off a cliff.

64. Insurance spokeslizard GECKO
The Gecko is the “spokes-lizard” for GEICO.

69. ORD postings ETDS
O’Hare International is the fourth busiest airport in the world. The original airport was constructed on the site between 1942 and 1943, and was used by the Douglas Aircraft Company for the manufacture of planes during WWII. Before the factory and airport were built, there was a community in the area called Orchard Place, so the airport was called Orchard Place Airport/Douglas Field. This name is the derivation of the airport’s current location identifier: ORD (OR-chard D-ouglas). Orchard Place Airport was renamed to O’Hare International in 1949 in honor of Lieutenant Commander Edward O’Hare who grew up in Chicago. O’Hare was the US Navy’s first flying ace and Medal of Honor recipient in WWII. As an aside, Edward O’Hare’s father was a lawyer for Al Capone who helped get the famous gangster convicted on tax evasion.

Down
4. Game with virtual suburbanites THE SIMS
“SimCity” is a very clever computer game. Players build and grow cities and societies by creating the conditions necessary for people (the Sims) to move in and thrive. “SimCity” was launched in 1989, and to this day it is consistently ranked as one of the greatest computer games of all time.

5. Munchkin kin ELF
“Munchkin” is a word that we use quite commonly these days, usually to describe a young child. The first Munchkins were characters created by L. Frank Baum in his book “The Wonderful Wizard of Oz”, published in 1900.

22. Geese flight formation VEE
Apparently geese fly in a V-formation for a couple of reasons. One is that it makes for efficient flight and conserves energy. The leading bird gets no advantage, but every following bird gets to “slipstream” a little. It has been noted that the lead bird drops to the back of the formation when he/she gets fatigued. It’s also thought that the flock can stick together more easily when in formation, so it is more difficult to lose someone along the way.

26. Roman moon deity LUNA
“Luna” is the Latin word for “moon”, and is the name given to the Roman moon goddess. The Greek equivalent of Luna was Selene. Luna had a temple on the Aventine Hill in Rome but it was destroyed during the Great Fire that raged during the reign of Nero.

28. Voice below soprano ALTO
In choral music, an alto is the second-highest voice in a four-part chorus made up of soprano, contr(alto), tenor and bass. The word “alto” describes the vocal range, that of the deepest female singing-voice, whereas the term “contralto” describes more than just the alto range, but also its quality and timbre. An adult male’s voice (not a boy’s) with the same range as an alto is called a “countertenor”.

35. Dench of Bond movies JUDI
Dame Judi Dench is an outstanding English actress, known for decades in her home country mainly as a stage and televisiion actress. Dench’s film career took off in the nineties with a relatively trivial role as “M” in the James Bond series of films. Since then she has played leading roles in several excellent movies including “Shakespeare in Love”, “Mrs. Brown” and “Notes on a Scandal”.

44. Pale lager beer PILSNER
Pilsener (also pilsner or pils) is a pale lager. The name “pilsener” comes from the city of Pilsen, now in the Czech Republic. It was in Pilsen, in 1842, that the first bottom-fermented lager was produced. A bottom-fermented beer is much clearer that a top-fermented beer, and has a crisper taste. The “top” and “bottom” refers to where the yeast gathers during the brewing process.

47. “__ Misérables” LES
The 1980 musical “Les Misérables” is an adaptation of the 1862 novel of the same name by Victor Hugo. The show opened in London in 1985, and is the longest running musical in the history of London’s West End. My wife and I saw “Les Miz” in the Queen’s Theatre in London quite a few years ago, but were only able to get tickets in the very back row. The theater seating is very steep, so the back row of the balcony is extremely high over the stage. One of the big events in the storyline is the building of a street barricade over which the rebels fight. At the height we were seated we could see the stagehands behind the barricade, sitting drinking Coke, even smoking cigarettes. On cue, the stagehands would get up and catch a dropped rifle, or an actor who had been shot. It was pretty comical. I didn’t really enjoy the show that much, to be honest. Some great songs, but the musical version of the storyline just didn’t seem to hang together for me.

50. “Sesame __” STREET
Back in 1966, the Carnegie Institute allocated money to study the use of television to help young children prepare for school. The institute gave an $8million grant to set up the Children’s Television Workshop with the task of creating an educational TV program for young people. The program began to come together, especially after Jim Henson (of Muppet fame) got involved. The name “Sesame Street” was chosen simply because it was the “least disliked” of all names proposed just before the program went on the air.

51. Like a Slinky COILED
The marvelous Slinky toy was invented in the early forties by a naval engineer called Richard James. James was developing springs for the navy that could stabilize sensitive instruments in rough seas. One day he accidentally knocked one of his experimental coils off a shelf and watched it “step” onto a stack of books, then onto a table and from there onto the floor where it recoiled itself very neatly. The Slinky was born …

59. Turkish bigwig AGA
“Aga” (also “agha”) is a title that was used by both civil and military officials in the Ottoman Empire.

60. Electric swimmer EEL
Electrophorus electricus is the biological name for the electric eel. Despite its name, the electric “eel” isn’t an eel at all, but rather what is called a knifefish, a fish with an elongated body that is related to the catfish. The electric eel has three pairs of organs along its abdomen, each capable of generating an electric discharge. The shock can go as high as 500 volts with 1 ampere of current (that’s 500 watts), and that could perhaps kill a human.

63. USN rank ENS
Ensign is (usually) the most junior rank of commissioned officer in the armed forces. The name comes from the tradition that the junior officer would be given the task of carrying the ensign flag.