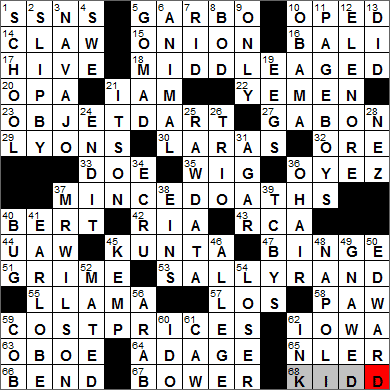 37A. What the answers to starred clues end in, in more ways than one MINCED OATHS
18A. *Celebrating the big five-oh, say MIDDLE-AGED (anagram of “egad!”)
23A. *Small museum piece OBJET D’ART (anagram of “drat!”)
53A. *Dancer with many fans SALLY RAND (anagram of “darn!”)
59A. *Profit factors COST PRICES (anagram of “cripes!”)

Today’s Wiki-est, Amazonian Googlies
Across
1. Their first parts are geog. indicators SSNS
A Social Security number (SSN) is divided into three parts i.e AAA-GG-SSSS, Originally, the Area Number (AAA) was the code for the office that issued the card. Since 1973, the Area Number reflects the ZIP code from which the application was made. The GG in the SSN is the Group Number, and the SSSS in the number is the Serial Number. However, this is all moot, as since 2011 SSn’s are assigned randomly.

5. Her last film was “Two-Faced Woman” GARBO
Famously, Greta Garbo lived a life of seclusion in New York City after she retired from the entertainment business. Commentators often associated her need for privacy with a line she uttered in the great 1932 movie “Grand Hotel”. Her character, Grusinskaya the Russian ballerina, said, “I want to be alone (…) I just want to be alone”.

15. __ dome ONION
The onion dome is a common form for church domes in Russia and Orthodox churches across the globe.

16. Denpasar’s island BALI
Denpasar is the capital city of Bali, the Indonesian province.

20. __-Locka, Florida OPA
Opa-Locka is a rather interesting city in Florida. Opa-Locka is located near Miami, and has a themed city plan that is based on “One Thousand and One Nights”. The city hall has a very Arabian look, and some examples of street names are Ali Baba Avenue and Sesame Street.

22. Country across the sea from Eritrea YEMEN
Yemen is located on the Arabian Peninsula, lying just south of Saudi Arabia and west of Oman. Yemen is the only state on the peninsula that is a republic (its official name is the Republic of Yemen). Everyone over the age of 18 gets to vote, but only Muslims can hold elected office.

Eritrea is a country located in the Horn of Africa, surrounded by Sudan, Ethiopia, Djibouti and the Red Sea. Some scientists believe that the area now known as Eritrea was the departure point for the anatomically modern humans who first left Africa to populate the rest of the world.

27. Oil-rich African country GABON
Gabon lies on the west coast of Central Africa. Since it became independent from France in 1960, it has become one of the most prosperous countries on the continent, making use of the abundant natural resources and willing foreign investment.

29. City on the Rhone LYONS
The city of Lyon in France, is also known as Lyons in English.

The Rhone river rises in Switzerland and flows through the southeast of France.

40. Pigeon-loving Muppet BERT
I’ve always believed that the “Sesame Street” characters Bert and Ernie were named after two roles played in the Christmas classic “It’s a Wonderful Life”. In the movie, the policeman’s name is Bert and his taxi-driving buddy is named Ernie. However, the “Sesame Street” folks have stated that the use of the same names is just a coincidence.

44. Bargainer with GM UAW
The United Auto Workers (UAW) was founded to represent workers in auto plants in the Detroit area in 1935. Nowadays the UAW’s membership extends into the aerospace, agriculture and other industries.

General Motors (GM) is still the largest manufacturer of cars in the world, at least in terms of numbers of cars sold. GM was established in 1908 in Flint, Michigan as a holding company for Buick, which in turn had been founded in 1899. GM’s Buick brand is the oldest, still-active automotive brand in the US.

45. LeVar’s “Roots” role KUNTA
Not only did Alex Haley author the magnificent novel “Roots”, but he was also the collaborator with Malcolm X on “The Autobiography of Malcolm X”. His 1976 novel “Roots” is based on Haley’s own family history, and he claimed to be a direct descendant of the real life Kunta Kinte, the slave who was kidnapped in the The Gambia in 1767. If you remember the fabulous television adaptation of “Roots”, you might recall that Kunta Kinte was played by LeVar Burton, who later went on to play another famous role, Geordi La Forge on “Star Trek: the Next Generation”.

53. *Dancer with many fans SALLY RAND
Sally Rand was a burlesque dance, famous for her fan dance using ostrich feathers. “Sally Rand” was a stage name, and Rand’s real name was Helen Beck. The Rand name was given to her by film director Cecil B. DeMille, inspired by the Rand McNally road atlas. Rand’s most famous performance was at the 1933 Chicago World’s Fair. While performing at the Fair she was arrested four times for public nudity, even though the nudity was only an illusion as Rand always wore a body suit.

57. Rock’s __ Lobos LOS
Los Lobos are an American Chicano rock band, who released their first LP in 1978 and are still going strong today. The band’s name “Los Lobos” translates from Spanish as “The Wolves”.

62. Siouan tribe IOWA
The Iowa Native American people are a Siouan nation. The Iowa speak the Chiwere language, along with the Missouria and Otoe tribes.

63. __ d’amore OBOE
An oboe d’amore is a musical instrument similar to an oboe but a little larger.

68. Pirate played by Laughton KIDD
William Kidd was a Scottish privateer who went by the name “Captain Kidd”. Although Kidd was a privateer, someone authorized by the government to attack foreign shipping, he was eventually arrested and executed for piracy. There is common opinion held today that the charges against Kidd were actually trumped up. Captain Kidd’s story was the basis of a 1945 film called “Captain Kidd” starring Charles Laughton in the title role. Laughton also appeared as Captain Kidd in 1952’s comic movie “Abbott and Costello Meet Captain Kidd”.

Down
3. Code talkers’ tribe NAVAJO
There are more speakers of the Navajo (also “Navaho”) language than any other Native American language north of the US-Mexico border. Famously, the Navajo language was used by the “code talkers” in the Pacific Theater during WWII to send secure communications by radio. These Navajo “coded” messages were used in fast tactical communications, with one bilingual Navajo speaker talking over the radio to another speaker, and the two acting as translators at either end of the conversation. The Navajo code was never broken by the Japanese.

8. Spa specimen BOD
I guess there are a lot of “bods” (bodies) on display at a spa.

11. Shoulder-length hair styles PAGEBOYS
What we now know as the “pageboy” hairstyle was apparently one introduced and made famous by the fifties fetish model, Betty Page. Women’s magazines dissociated themselves from the connection with Ms. Page and sold the hairstyle to the public as one worn historically by English pageboys, hence the name. A pageboy hairstyle is sort of like a “long bob cut” I guess. But don’t listen to me; I get a “number one all over” at my local barber shop …

19. Brain tests, briefly EEGS
An electroencephalogram (EEG) is a record of electrical activity caused by the firing of neurons within the brain. The EEG might be used to diagnose epilepsy, or perhaps to determine if a patient is “brain dead”.

28. __ Perce tribe NEZ
The Nez Percé tribe of the Pacific Northwest call themselves the Nimiipuu, meaning “The Real People”. The name Nez Percé means “pierced nose” in French, a name applied in error to the Nimiipuu instead of the neighboring Chinook tribe, who did in fact practice nose piercing.

31. Seaweed extract AGAR
Agar is a jelly extracted from seaweed that has many uses. Agar is found in Japanese desserts, and can also be used as a food thickener or even as a laxative. In the world of science it is the most common medium used for growing bacteria in Petri dishes.

34. Beige relative ECRU
The shade called ecru is a grayish, yellowish brown. The word “ecru” comes from French and means “raw, unbleached”. “Ecru” has the same roots as our word “crude”.

36. Atheist activist Madalyn Murray __ O’HAIR
Madalyn Murray O’Hair was the president of the organization American Atheists from 1963 to 1986. Murray was the plaintiff in the lawsuit Murray v. Curlett that in 1963 led to the Supreme Court ruling that ended Bible-reading in American schools. Murray came to a sorry end, as she was kidnapped in 1995 and brutally murdered along with her son and granddaughter. The crime was committed by a co-worker at American Atheists.

37. Dennis the Menace neighbor MR WILSON
“Dennis the Menace” is a comic strip that first appeared in 1951, originally drawn by Hank Ketcham. The strip made the jump over the years from the newspaper to television and the silver screen. Dennis’s full name is Dennis Mitchell, and his parents are Henry and Alice (Johnson) Mitchell. Dennis’s nemesis is his neighbor, Mister George Everett Wilson. Hank Ketcham drew his inspiration for the story from his real life. When he introduced the strip he had a 4-year-old son called Dennis, and a wife named Alice.

39. Super Fro-Yo sellers TCBY’S
TCBY is a chain of stores selling frozen yogurt, founded in 1981 in Little Rock, Arkansas. The acronym TCBY originally stood for “This Can’t Be Yogurt”, but this had to be changed due to a lawsuit being pressed by a competitor called “I Can’t Believe It’s Yogurt”. These days TCBY stands for “The Country’s Best Yogurt”.

41. Drop zone? EARLOBE
Drop earrings might be found on an earlobe.

45. Dole’s running mate KEMP
Jack Kemp was a Vice Presidential candidate in the 1996 presidential election, on the Republican ticket with Bob Dole. Prior to politics, Kemp played football in the NFL, serving as quarterback and captain of the San Diego Chargers and the Buffalo Bills. Kemp passed away in 2009, and was posthumously awarded the Presidential Medal of Freedom by President Obama.

48. City SE of Roma NAPOLI
Naples (“Napoli” in Italian) is the third largest city in Italy. The name “Napoli” comes from the city’s Ancient Greek name, which translates as “New City”. That’s a bit of a paradox as today Naples is one of the oldest, continuously-inhabited cities in the world.

50. “__ Scissorhands” EDWARD
“Edward Scissorhands” is a 1990 film starring Johnny Depp and directed by Tim Burton. I cannot tell you how little I enjoyed this movie …

52. Checked for the last time? MATED
In the game of chess, when the king is under immediate threat of capture it is said to be “in check”. If the king cannot escape from check, then the game ends in “checkmate” and the player in check loses. In the original Sanskrit game of chess, the king could actually be captured. Then a rule was introduced requiring that a warning be given if capture was imminent (today we announce “check!”) so that an accidental and early ending to the game doesn’t occur.

56. Fast horse ARAB
The Arab (or Arabian) breed of horse takes its name from its original home, the Arabian Peninsula. Like any animal that humans have over-bred, the horse falls prey to genetic diseases, some of which are fatal and some of which require the horse to be euthanized.

59. Pen’s mate COB
A female swan is called a pen, and a male a cob. The term “cob” comes from the Middle English “cobbe” meaning “leader of a group”.