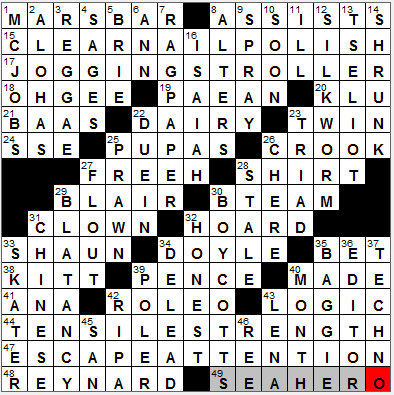 Today’s Wiki-est, Amazonian Googlies
Across
1. “An almond in every bite” candy MARS BAR
Having lived on both sides of the Atlantic, I find the Mars Bar to be the most perplexing of candies! The original Mars Bar is a British confection (and delicious) first manufactured in 1932. The US version of the original Mars Bar is called a Milky Way. But there is candy bar called a Milky Way that is also produced in the UK, and it is completely different to its US cousin, being more like an American “3 Musketeers”. And then there is an American confection called a Mars Bar, something different again. No wonder I gave up eating candy bars …

8. Magic Johnson’s 10,141 ASSISTS
Magic Johnson’s real name is Earvin Johnson. Johnson was born and grew up in Lansing, Michigan. Earvin earned the nickname “Magic” when playing basketball in high school after one particularly great performance on the court.

19. Ecstatic hymn PAEAN
A paean is a poem or song that expresses triumph or thanksgiving. “Paean” comes from the ancient Greek “paian” meaning “song of triumph”.

20. 1950s Reds nickname KLU
Ted Kluszewski’s nickname was “Big Klu” as he stood at 6ft 2in tall, and weighed 240 pounds. Kluszewski’s biceps were so huge that he often had to cut off the sleeves of his baseball uniform. He won the 1954 home run title in 1954 when playing for Cincinnati.

21. “The Whiffenpoof Song” sound effects BAAS
The Yale Whiffenpoofs are an a cappella group based in Yale University. They are the oldest such university group in this country, established in 1909. “The Whiffenpoof Song” is the group’s traditional closing number. It was first performed back in 1909, and has been recorded by many artists including Rudy Vallee and Bing Crosby.

22. Jersey’s environs DAIRY
Jersey cattle were originally bred on the island of Jersey in the Channel Islands, off the coast of France. If you’ve seen Elsie the Cow, the mascot of Borden in the US, then you’ve seen a Jersey cow.

24. Paris-to-Vichy dir. SSE
Vichy is a spa town in the center of France. The people from Vichy are known as Vichyssois. After Paris, was occupied by the Germans in WWII, Vichy was chosen as the seat of government for what was called the French State. The Vichy government had theoretical authority even in occupied France, and is remembered for its collaboration with the German authorities. Vichy was chosen as the new seat of government because of its relative proximity to Paris, and simply because the town had the largest hotel room capacity in the “free zone” of the country.

25. Post-larval insects PUPAS
The pupa is an intermediate stage in the development of an insect. All four stages are embryo, larva, pupa and imago.

26. Item with which Osiris is usually pictured CROOK
Osiris was the Egyptian god of the underworld. Osiris was the son of Geb the Earth god, and Nut the sky goddess. His wife Isis was also his sister …

27. Clinton’s FBI director FREEH
Louis Freeh was the Director of the FBI in the Clinton administration. Prior to heading up the FBI, Freeh had been a US Attorney and US district court judge. Years earlier, Freeh had started out his career with the FBI as an agent.

29. __ House: Pennsylvania Ave. guest quarters BLAIR
Blair House is the official residence for guests of the US President. Blair House is primarily used for foreign heads of government. When such a guest is in residence, the house flies the leader’s national flag and in effect becomes foreign soil for the duration of the stay.

32. Be a Scrooge HOARD
The classic 1843 novella “A Christmas Carol” by Charles Dickens has left us with a few famous phrases and words. Firstly, it led to the popular use of “Merry Christmas”, and secondly it gave us the word “scrooge” meaning a miserly person. And thirdly, everyone knows that the character Scrooge was fond of using the now famous line “Bah! Humbug!”.

33. Cassidy who played a Hardy Boy SHAUN
Shaun Cassidy is a singer and actor. Cassidy played the role of Joe Hardy in “The Hardy Boys/Nancy Drew Mysteries” on television in the late seventies. He is the son of actress and singer Shirley Jones,and the half-brother of actor/singer David Cassidy who appeared together in “The Partridge Family”.

34. Knighted mystery writer who championed the Boer War DOYLE
Sir Arthur Conan Doyle was of course the author who created the character Sherlock Holmes. Doyle also wrote a pamphlet justifying the UK position in the Second Boer War, at a time when the UK was universally criticized for action taken in South Africa. Doyle believed that it was this pamphlet that earned him his knighthood.

38. Sultry “Mink, Shmink” singer KITT
Eartha Kitt sure did have a unique voice and singing style. Her rendition of “Santa Baby” has to be one of the most distinctive and memorable recordings in the popular repertoire. Some of you will no doubt remember Eartha playing Catwoman on the final series of the TV show “Batman”.

39. Coppers in London PENCE
I remember the days when there used to be 240 pence (pennies) in an Irish/British pound. Life became so much easier when that was changed to 100 “new pence” in 1971.

41. Ducks’ home, on the ticker ANA
The Walt Disney Company founded the Mighty Ducks of Anaheim hockey team in 1993, with the franchise’s name being a nod to the 1992 Disney movie called “The Mighty Ducks”. The name was changed to the Anaheim Ducks when Disney sold the team before the 2006-2007 season.

42. Event where lumberjacks get wet ROLEO
Roleo is the name given to a log rolling competition traditionally engaged in by lumberjacks

43. Spock specialty LOGIC
Leonard Nimoy played the logical Mr. Spock in the original “Star Trek” television series. Spock has to be the most popular character on the show, and keeps popping up in “Star Trek” spin offs to this day. Nimoy first worked alongside William Shatner (Captain Kirk) in an episode of “The Man from U.N.C.L.E.” (I loved that show!), with Nimoy playing a bad guy and Shatner playing an U.N.C.L.E. recruit.

48. Red fox of medieval lore REYNARD
Reynard is a fabled red fox that appears in many European folk tales. The Reynard tales were so popular in France that today the French word for fox is “renard”.

49. 1993 Kentucky Derby winner sired by Polish Navy SEA HERO
Sea Hero is a retired thoroughbred racehorse. Sea hero won the Kentucky Derby in 1993 and made a lot of money people who had a bet on him as he romped home at odds of 13/1.

Down
1. They’re often filled with teens MCJOBS
McJob is a slang term for a low-paying position that offers little chance for advancement. The term of course comes from front-line jobs at McDonald’s fast-food restaurants.

2. Some hellos … and goodbyes ALOHAS
The Hawaiian word “Aloha” has many meanings in English: affection, love, peace, compassion and mercy. More recently “aloha” has come to mean “hello” and “goodbye”, but only since the mid-1800s.

3. Marley’s music REGGAE
Bob Marley is the most widely known reggae performer, with big hits such as “I Shot the Sheriff”, “Woman, No Cry” and “One Love”. A little sadly perhaps, Marley’s best selling album was released three years after he died. That album would be the legendary album called “Legend”.

5. Some French wheels BRIE
Brie is a soft cheese, named after the French province of Brie where it originated.

6. Novelist Beattie ANN
Ann Beattie is a short story writer and novelist. Beattie’s first novel was “Chilly Scenes of Winter” published in 1976. It was adapted for the big screen in 1979 and released under the same title and also under the name “Head Over Heels”.

7. Incongruous-sounding high-end stationery RAG PAPER
Cotton paper (also called “rag paper”) is made not from wood pulp like ordinary paper, but rather from cotton. The cotton is usually sourced from used cloths or rags, hence the name. Cotton paper lasts longer and is stronger then ordinary paper.

13. “The Hollow Men” poet TS ELIOT
T. S. Eliot was born in New England but grew up in St. Louis, Missouri. Much of Eliot’s college education was at Oxford, and clearly he became comfortable with life in England. In 1927 he became a British citizen, and lived the rest of his life in the UK.

23. Basic chord TRIAD
A triad is a group of three, and specifically in music is a chord made up of three notes.

26. Beloved, in Bordeaux CHERE
“Cher” is the French for “dear”. The spelling is “chère” when used with a feminine noun.

30. Stops patronizing BOYCOTTS
“Boycott” is another word given to the world by the Irish! Englishman Captain Charles Boycott found himself on the wrong side of a local community in County Mayo in the west of Ireland, and in a concerted campaign he was refused service by all around him. His name lives on …

33. Button, notably SKATER
Dick Button is a retired figure skater and sports commentator from Englewood, New Jersey. It was Button who invented the flying camel spin, and indeed the move was called the “Button camel” for many years. He was also the first skater in the world to land a double Axel in competition (in 1948), and the first to land a triple jump (in 1952).

39. Gondolier, e.g. POLER
The word “gondola” was originally limited to the famous boats that travel along the canals of Venice. When man started to fly through the air in hot air balloons, “gondola” was used for the basket in which the passenger(s) traveled. By extension, the structure carrying passengers and crew under an airship is also called a gondola, as are the cars suspended from a cable at a ski resort.

42. Strahan co-host RIPA
When Kelly Ripa secured the co-host spot on morning television with Regis Philbin, she was still acting in “All My Children” in a role she had been playing for over ten years. After a year of holding down two jobs, she eventually gave up the acting job.

When Regis Philbin retired from his famous morning talk show with Kelly Ripa, he was eventually replaced by former NFL player Michael Strahan. Apparently Strahan’s addition to the show has been extremely well received by audiences.

43. Hyena in “L’il Abner” LENA
In the “Li’l Abner” comic strip, Lena the Hyena was supposed to be the world’s ugliest woman. She appeared occasionally in the storyline with her face always covered, supposedly to protect the readers.

45. Japanese surname addition -SAN
The suffix “-san” is used in Japanese in a number of different contexts. Often “-san” replaces our “Mr.” or “Ms”.

46. Mr. __!: old whodunit game REE
The full name for the old mystery game is “Mr. Ree! The Fireside Detective”. It was first published in 1937 and frankly it sounds like a great game, even by today’s standards …