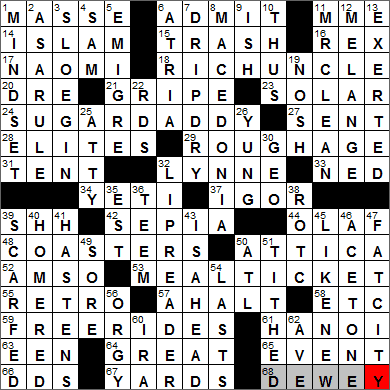 CROSSWORD SETTER: Norm Guggenbiller
THEME: Supporters … today’s themed answers are supporters who will get you to FAT CITY:

Today’s Wiki-est, Amazonian Googlies
Across
1. Tricky stroke MASSE
In billiards, a massé shot is one in which the cue ball makes an extreme curve due to the player imparting heavy spin on the ball with his or her cue.

14. Belief of more than a billion ISLAM
Over 50% of the world’s population consider themselves to be adherents of the big three Abrahamic religions: Christianity (2-2.2 billion), Islam (1.6-1.7 billion) and Judaism (14-18 million).

16. Jets coach Ryan REX
Rex Ryan is the head coach for the New York Jets NFL team, and has been so since 2009.

17. Watts of “The Impossible” NAOMI
Naomi Watts was born in the UK and moved to Australia when she was 14 years of age. It was in Australia that Watts got her break in television and movies. Probably her most acclaimed role was in the 2003 film “21 Grams” with Sean Penn and Benicio del Toro. Watts is best friends with fellow Australian actress Nicole Kidman.

“The Impossible” is a 2012 film starring Naomi Watts and Ewan McGregor about the 2004 tsunami in the Indian Ocean, and the aftermath. Watts and McGregor play a British couple on vacation in Thailand when the tsunami hits. Mother and one son are swept away, and the film recounts the efforts of father and two remaining sons to get the family reunited.

20. Hip-hop Dr. DRE
Dr. Dre is the stage name of rapper Andre Romelle Young. Dr. Dre is known for his own singing career as well as for producing records and starting the careers of others such Snoop Dogg, Eminem and 50 Cent.

31. Portable digs TENT
“Digs” is short for “diggings” meaning “lodgings”, but where “diggings” came from, no one seems to know.

32. Traveling Wilburys co-founder Jeff LYNNE
Jeff Lynne is a singer-songwriter best known as the leader of the Electric Light Orchestra (ELO). Lynne went on to form the Traveling Wilburys supergroup, along with George Harrison, Roy Orbison and Tom Petty.

33. Nancy Drew’s guy NED
I loved the Nancy Drew mysteries as a kid (I know, as a boy I “shouldn’t” have been reading girls’ books!). The Nancy Drew stories were written by a number of ghost writers, although the character was introduced by Edward Stratemeyer in 1930. Nancy Drew’s boyfriend was Ned Nickerson, a college student from Emerson.

34. Sherpa’s sighting YETI
In the Tibetan language, Sherpa means “eastern people” (sher = east, pa = people). Sherpas are an ethnic group from Nepal, but the name is also used for the local guides who assist mountaineers in the Himalayas, and particularly on Mount Everest.

37. Clichéd film assistant IGOR
Igor has been the assistant to Dracula, Frankenstein and Young Frankenstein among others. Igor is almost invariably portrayed as a hunchback.

42. Old-style shade SEPIA
Sepia is that lovely rich, brown-grey color so common in old photographs. “Sepia” is the Latinized version of the Greek word for cuttlefish, as sepia pigment is derived from the ink sac of the cuttlefish.The “sepia tone” of old photographs is not the result of deterioration over time. Rather, it is the result of a deliberate preservation process which converts the metallic silver in the photographic image to a more stable silver sulfide. Prints that have been sepia-toned can last in excess of 150 years.

48. Wood protectors COASTERS
A “coaster” is a small mat or plate that goes under a glass or cup. Back in the late 1800s, the original coaster was a small drink stand that sat on a table. As the drink stand “coasted” around from guest-to-guest, it earned the name “coaster”.

50. Prison in 1971 news ATTICA
The Attica Correctional Facility in Attica, New York is used to incarcerate the toughest of the state’s convicts. Famous people who have spent time in Attica include David Berkowitz (Son of Sam) and Mark David Chapman (who killed John Lennon). Attica was the site of a famous riot in 1971 involving almost 1,000 inmates. Control of the prison was restored by the authorities after several days of unrest that left 39 people dead, including ten guards and other prison employees.

The character Dr. Tim Whatley is a dentist on the sitcom “Seinfeld”. It is Whatley who gives Jerry a label maker that Elaine had previously given to Whatley as a gift. This gave rise to the term “regifting”, a term that has been used regularly outside of the show since that “Seinfeld” episode first aired in 1995.

68. Nephew of Donald DEWEY
Donald Duck’s nephews are identical triplets called Huey, Dewey and Louie, and they first appeared on the screen in 1938. Once in awhile due to errors in production, a fourth duck can be seen in the background. This little “mistake” is affectionately called “Phooey Duck” by folks in the industry.

Down
3. Red liqueur SLOE GIN
The sloe is the fruit of the blackthorn bush.

8. Landlocked European country MACEDONIA
Macedonia is a country in the Balkans of Southeast Europe. Macedonia declared independence from former Yugoslavia in 1991. The country is landlocked and is surrounded by Kosovo, Serbia, Bulgaria, Greece and Albania.

11. Magic Eraser spokesman MR CLEAN
The board cleaner known as Magic Eraser uses melamine foam. Melamine foam is also used for insulating pipes and ducts, and as a soundproofing material.

12. Mishmash MELANGE
“Mélange” is the French word for “mixture”.

19. Bite NOSH
Our word “nosh” has been around since the late fifties, when it was imported from the Yiddish word “nashn” meaning “to nibble”.

26. Egg foo __ YUNG
Egg foo yung is a dish served in Chinese restaurants, and is basically an omelet. It probably takes its name from a flower called the Fu Yung.

30. Former Prizm maker GEO
Geos were small vehicles manufactured by General Motors mainly in the nineties. Geos were designed to compete head-to-head with the small imports that were gaining market share at the time in the US. Some Geo models that you might remember are the Metro, the Prizm and the Storm. The cars were actually built as joint-ventures with Japanese manufacturers. The Prizm was a GM/Toyota project, the Metro was GM/Suzuki, and the Storm was GM/Isuzu.

38. Scholarship-offering federal gp. ROTC
The Reserve Officers’ Training Corps (ROTC) is a training program for officers based in colleges all around the US. The ROTC program was established in 1862 when as a condition of receiving a land-grant to create colleges, the federal government required that military tactics be part of a new school’s curriculum.

46. Salon solvent ACETONE
Acetone is the active ingredient in nail polish remover and in paint thinner.

51. Pledged, in a way TITHED
A tithe is a traditional payment of one tenth of a person’s annual income and is usually given to a church. Tithing is a practice taught in many traditions, and according to a 2002 survey, about 3% of American adults donate 10% or more of their income to a church.