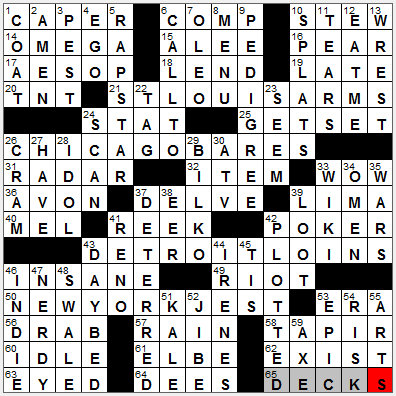 CROSSWORD SETTER: Dan Schoenholz
THEME: Team Mix-Up … today’s theme answers are city football teams, but the team name has been scrambled in an anagram that suits the clue:

Today’s Wiki-est, Amazonian Googlies
Across
6. Casino freebie COMP
The “casino” originated in the 1700s, first describing a public room for music or dancing. The name “casino” is a diminutive of “casa” meaning “house”.

14. End of a series OMEGA
Omega is the last letter of the Greek alphabet, and is the one that looks like a horseshoe. The word “omega” literally means “great O” (O-mega). Compare this with the Greek letter Omicron meaning “little O” (O-micron).

15. Away from the breeze ALEE
“Alee” is the direction away from the wind. If a sailor points into the wind, he or she is pointing “aweather”.

17. Noted storyteller AESOP
Aesop lived in Ancient Greece, probably around the sixth century BC. Supposedly Aesop was born a slave, somehow became a free man, but then met with a sorry end. He was sent to the city of Delphi on a diplomatic mission but instead insulted the Delphians. Aesop was tried on a trumped-up charge of stealing from a temple, sentenced to death and was thrown off a cliff.

20. Blast cause TNT
TNT is an abbreviation for trinitrotoluene. Trinitrotoluene was first produced by the German chemist Joseph Wilbrand in 1863, who developed it for use as a yellow dye. TNT is relatively difficult to detonate so it was on the market as a dye for some years before its more explosive properties were discovered.

26. Good name for a Windy City nudist festival? CHICAGO BARES (Bears)
The Chicago Bears were founded in Decatur, Illinois in 1919 and moved to Chicago in 1921. The Bears are one of only two franchises in the NFL that were around at the time of the NFL’s founding (the other is the Arizona Cardinals, who were also based in Chicago in 1921).

31. Air traffic control device RADAR
Scientists have been using radio waves to detect the presence of objects since the late 1800s, but it was the demands of WWII that accelerated the practical application of the technology. The British called their system RDF standing for Range and Direction Finding. The system used by the US Navy was called Radio Detection And Ranging, shortened to the acronym RADAR.

36. The Bard’s river AVON
There are actually four rivers called the Avon in England, but “Shakespeare’s Avon” lies mainly in Warwickshire. The name “Avon” comes from the Old English word for a river, “abona”. Stratford-upon-Avon was of course William Shakespeare’s birthplace.

William Shakespeare is known as the Bard of Avon as he was born and raised in the lovely town of Stratford-upon-Avon in the English midlands.

39. Andean capital LIMA
Lima is the capital city of Peru. Lima was founded in 1535 by the Spanish conquistador Francisco Pizarro, who named it “la Ciudad de los Reyes” (the City of Kings). Pizarro chose this name because the decision to found the city was made on January 6th, the feast of the Epiphany that commemorates the visit of the three kings to Jesus in Bethlehem.

40. Actress Harris of “thirtysomething” MEL
Mel Harris is an actress from Bethlehem, Pennsylvania. Harris is perhaps best known as Hope Murdoch Steadman from the eighties TV show “thirtysomething”. Before she made it as an actress, Harris twice appeared as a contestant on the “Pyramid” game show on television. In 1991 she made a third appearance on the show, only this time as a celebrity player.

43. Good name for a Motor City butcher shop? DETROIT LOINS (Lions)
The Detroit Lions are the NFL team that plays home games at Ford Field in Detroit, Michigan. The team was founded way back in 1929 as the Portsmouth Spartans from Portsmouth, Ohio. The Spartans joined the NFL during the Great Depression as other franchises collapsed. However, the Spartans couldn’t command large enough gates in Portsmouth so the team was sold and relocated to Detroit in 1934.

50. Good name for an Empire City comedy club? NEW YORK JEST (Jets)
Just like the New York Giants, the New York Jets are based in New Jersey, headquartered in Florham Park. The Jets and the Giants have a unique arrangement in the NFL in that the two teams share the same stadium, the New Meadowlands in East Rutherford, New Jersey. The Jets were an AFL charter team, formed in 1959 as the Titans of New York. They changed their name to the Jets in 1963.

58. Swinelike beast TAPIR
All four species of tapir are endangered. Even though the tapir looks much like a pig, it is more closely related to the horse and the rhinoceros.

61. Hamburg’s river ELBE
The River Elbe rises in the Czech Republic, and travels over a thousand kilometers before emptying into the North Sea where it feeds the port of Hamburg.

Down
2. “You said it, sister!” AMEN
The word “amen” is translated as “so be it”. “Amen” is said to be of Hebrew origin, but it is likely to be also influenced by Aramaic and Arabic.

5. Andre 3000, for one RAP STAR
André 3000 is the stage name of rap star André Lauren Benjamin from Atlanta, Georgia. André 3000 used to use the name Dré, and was part of the hip-hop duo called OutKast with fellow rapper Big Boi. In 2004 PETA named André 3000 the “World’s Sexiest Vegetarian Celebrity”.

7. Pats on pancakes, maybe OLEO
Emperor Louis Napoleon III of France announced a competition to develop a substitute for butter, a substitute that would be more accessible to the lower classes and more practical for the armed forces. In 1869, a French chemist called Hippolyte Mege-Mouries came up with something that he called oleomargarine, which was eventually manufactured under the trade name “margarine”. The name “oleomargarine” also gives us our generic term “oleo”.

9. Dog’s breeding history PEDIGREE
A genealogical chart showing the descent from an ancestor is branched and was once said to look like the footprint of a bird, a crane in fact. The Old French for “foot of a crane” is “pied de gru”, from which we get our word “pedigree”. Interesting …

12. Invitation on a fictional cake EAT ME
In Lewis Carroll’s “Alice’s Adventures in Wonderland”, Alice follows the white rabbit down a rabbit hole and finds a bottle labelled “DRINK ME”. When she drinks the contents, it causes her to shrink. She also sees a cake adorned with the words “EAT ME”, and when she eats the cake she grows so big she finds it hard to stand up. After eating the cake, she says the famous words, “Curiouser and curiouser”.

29. Sitcom noncom BILKO
Master Sergeant Ernie Bilko was played by Phil Silvers in his TV show that aired in the fifties. “The Phil Silvers Show” was hugely successful in reruns in the British Isles, even more so than over here in the US.

33. User-edited site WIKI
A wiki is a website in which users are allowed to create and edit content themselves. The term “wiki” comes from the name of the first such site, introduced in 1994 and called WikiWikiWeb. “Wiki” is a Hawaiian word for “quick”, and is used because comprehensive content is created very quickly a there are so many collaborators contributing to the site.

39. Booty LOOT
“Booty”, meaning plunder or profit, is derived from the Old French word “butin” which has the same meaning.

41. Gambling town on I-80 RENO
Reno, Nevada was named in honor of Major General Jesse Lee Reno, a Union officer killed in the Civil War. The city has a famous “Reno Arch”, a structure that stands over the main street. The arch was erected in 1926 to promote an exposition planned for the following year. After the expo, the city council decided to keep the arch and held a competition to decide what wording should be displayed, and the winner was “The Biggest Little City in the World”.

44. Castle and Cara IRENES
Vernon and Irene Castle were a husband-wife team of ballroom dancers who regularly performed on Broadway at the start of the 20th century. The Castles have been credited with creating or at least popularizing the Fox Trot.

Irene Cara (as well as acting in “Fame”) sang the theme songs for the movies “Fame” and “Flashdance”.

48. Low, moist area SWALE
A swale is a narrow tract of low-lying land that is usually wet or marshy. It can be naturally occurring or man-made. One might create a swale to help manage drainage of adjacent land.

54. Game of world domination RISK
Risk is a fabulous board game, first sold in France in 1957. Risk was invented by a very successful French director of short films called Albert Lamorisse. Lamorisse called his new game “La Conquête du Monde”, which translates into English as “The Conquest of the World”. A game of Risk is a must during the holidays in our house …