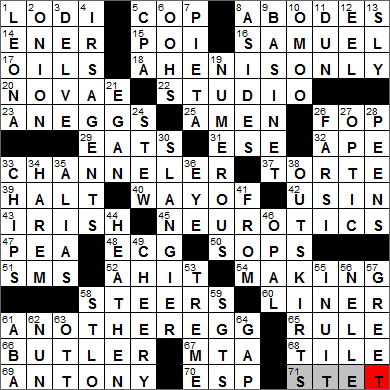 Today’s Wiki-est, Amazonian Googlies
Across
1. City SE of Milan LODI
Lodi is a city in Lombardy in the north of Italy. The inhabitants of Lodi are known as Lodigiani.

5. Station occupant COP
The noun “cop” meaning police officer is short for “copper”, someone who “cops”, someone who seizes or takes.

8. Extended stays ABODES
“Abode” is the act of “abiding”, remaining in a place.

14. Dept. with a sun on its seal ENER
The seal of the US Department of Energy includes symbols representing various energy sources, including solar, nuclear and wind power.

15. Dish made in an oven called an imu POI
I am reliably informed by a blog reader that poi is not in fact cooked in an imu. Taro root might be baked in an imu, but that produces baked tarot root, not poi …

An imu is a type of underground oven that is used in the traditional Hawaiian cooking method known as “kālua”. The word “kālua” actually means “to cook in an underground oven”. The imu is a sand or dirt pit usually about three feet deep. A fire is built in the pit using koa wood and then rocks are placed on the fire. Once the rocks are sufficiently hot, the pit is lined with banana leaves. The seasoned meat to be cooked is also wrapped in banana leaves, as well as wet burlap. The meat “package” is surrounded by hot rocks in the pit and then covered with sand or soil. Cooking time is usually 6 or 7 hours.

16. With 66-Across, author of this puzzle’s quote SAMUEL
(66A. See 16-Across BUTLER)
Samuel Butler was a British novelist and satirist. His best known novels are “Erewhon” (1872) and “The Way of All Flesh” (1903). Butler also made translations of Homer’s “Iliad” and “Odyssey” that are still widely used.

20. Super stars? NOVAE
A nova is basically a star that suddenly gets much brighter, gradually returning to its original state weeks or even years later. The increased brightness of a nova is due to increased nuclear activity causing the star to pick up extra hydrogen from a neighboring celestial body. A supernova is very different from a nova. A supernova is a very bright burst of light and energy created when most of the material in a star explodes. The bright burst of a supernova is very short-lived compared to the sustained brightness of a nova.

31. Legal appurtenance? -ESE
An appurtenance is an accessory, perhaps a piece of equipment for a specific task. It might also be an appendage, a suffix to a word, for example.

37. Rich dessert TORTE
A torte is a type of cake made primarily with eggs, sugar and ground nuts (but no flour).

43. __ coffee IRISH
Shannon Airport in the West of Ireland was the first place in the world to offer duty-free shopping. Shannon was also where the Irish Coffee originated, despite claims to the contrary …

48. Hosp. readout ECG
An EKG measures electrical activity in the heart. Back in my homeland of Ireland, an EKG is known as an ECG (for electrocardiogram). We use the German name in the US, Elektrokardiogramm, giving us EKG. Apparently the abbreviation EKG is preferred as ECG might be confused (if poorly handwritten, I guess) with EEG, the abbreviation for an electroencephalogram.

50. Incentives to cooperate SOPS
Cerberus is a dog with three heads that appears in both Greek and Roman mythology. Cerberus had the job of guarding the gates of Hades and preventing those who had crossed the River Styx from ever escaping. A sop is a piece of food that has been dipped in some liquid, as one might sop a piece of bread in soup. There is an idiomatic expression, “to give a sop to Cerberus”, which means to give someone a bribe, or pay someone off. The idea is that if one could bribe Cerberus, give him a sop to eat, then he would let you pass and escape from Hades.

67. NYC subway overseer MTA
The MTA is the Metropolitan Transportation Authority, which has public transportation responsibility in the state of New York (as well as part of Connecticut).

68. Three-point B, say TILE
The game of Scrabble has been produced in many international versions, and each of these editions has its own tile distribution to suit the local language. For example, in English we have two tiles worth ten points: one “Q” and one “Z”. If you play the game in French then there are five tiles worth ten points: one “K”, one “W”, one “X”, one “Y” and one “Z”.

71. Leave in STET
“Stet” is a Latin word meaning “let it stand”. In editorial work, the typesetter is instructed to disregard any change previously marked by writing the word “stet” and then underscoring that change with a line of dots or dashes.

4. Feds concerned with returns IRS AGENTS
The Internal Revenue Service (IRS) was set up during the Civil War to raise money to cover war expenses. Prior to the introduction of income tax in 1862, the government was funded by levies on trade and property.

7. Two-figure sculpture PIETA
The Pietà is a representation of the Virgin Mary holding in her arms the dead body of her son Jesus. The most famous Pietà is probably the sculpted rendition by Michelangelo which is located in St. Peter’s Basilica in Vatican City. In some depictions of Mary with Jesus in her arms, mother and son are surrounded by other figures from the New Testament. These depictions are known as “Lamentations”.

9. Medieval helmet BASINET
A bascinet (also “basinet”) was a military helmet worn in Medieval Europe. The bascinet often had chain mail with extended downwards to protect the neck.

10. Novel that begins in the Marquesas Islands OMOO
Herman Melville mined his own experiences when writing his novels. Melville sailed from New Bedford, Massachusetts in 1841 on a whaler heading into the Pacific Ocean (a source for “Moby Dick”). Melville ended up deserting his ship 18 months later and lived with natives on a South Pacific Island for three weeks (a source for “Typee”). He picked up another whaler and headed for Hawaii, where he joined the crew of a US navy frigate that was bound for Boston (a source for “Omoo”).

The Marquesas Islands are known in French as the “Iles Marquises”. The Marquesas are a group of volcanic islands in French Polynesia in the Southern Pacific. In the 1500s the population of the Marquesas has been estimated at over 100,000. Then along come Western explorers, and western diseases. The Marquesas were hit the hardest by the introduction of diseases to which they had no resistance. By 1900 the ravaged population had been reduced to just over 2,000 people.

11. Bug for payment DUN
“To dun” is to insist on payment of a debt.

12. Member of the genus Anguilla EEL
The genus of fishes known as Anguilla is made up of freshwater eels. These ells spend their lives in rivers, lakes or estuaries but return to the ocean to spawn.

19. Legion NUMEROUS
The word “legion” can be used to mean “a large number”.

21. Richard of “A Summer Place” EGAN
Richard Egan was an actor from San Francisco. One of Egan’s more famous roles was playing Elvis Presley’s older brother in “Love Me Tender”. Rod Serling eventually chose to narrate his epic “The Twilight Zone” series himself, but his first choice for narrator had been Richard Egan. It was perhaps lucky that Egan couldn’t do the “The Twilight Zone” gig due to other contractual obligations, as Serling’s commentary added so much to the show.

“A Summer Place” is a 1959 movie based on a novel of the same name by Sloan Wilson. The film is a romantic drama starring Richard Egan and Dorothy McGuire. “Theme from A Summer Place” became a number one hit for Percy Faith in 1960.

26. Kurdish relative FARSI
“Farsi” is one of the local names for Persian, an Iranian language.

28. Hammer parts PEENS
The peen of a hammer is on the head, and is the side of the head that is opposite the striking surface. Often the peen is in the shape of a hemisphere (as in a ball-peen hammer), but usually it is shaped like a claw (mainly for removing nails).

46. Gem mined mostly in Australia OPAL
97% of the world’s opals come from Australia, so it’s no surprise perhaps that the opal is the national gemstone of the country. The state of South Australia provides the bulk of the world’s production, about 80%.

55. Greenland native INUIT
The Inuit peoples live in the Arctic, in parts of the US, Russia, Greenland and Canada.

Greenland is the largest island in the world. Geographically, Greenland is part of the continent of North America, but culturally and politically is considered part of Europe. The island became a Danish colony in 1815, and joined the European Economic Community (EEC) with Denmark. Greenland withdrew from the EEC after a referendum in 1983. Since 2009, Greenland has been relatively autonomous, with the Danish government retaining control of foreign affairs, defence and the judicial system.

56. “Ally McBeal” lawyer NELLE
Nelle Porter is a character on the TV show “Ally McBeal” who is portrayed by actress Portia de Rossi.

“Ally McBeal” is a very successful television show that aired from 1997 to 2002. It starred Calista Flockhart in the title role, as a successful lawyer. I must admit, I never watched the show, but I am told by a kind blog reader that it’s good viewing. It was created by David E. Kelley, who is also the man behind other successful legal dramas including “The Practice”, “Boston Legal” and “Harry’s Games’. Kelley is married to actress Michelle Pfeiffer.

58. D-Day city ST LO
Saint-Lô is a town in Normandy that was occupied by Germany in 1940. Saint-Lo stood at a strategic crossroads and so there was intense fighting there during the Normandy invasion of 1944. After a prolonged bombardment, very little of the town was left standing.

59. York et al.: Abbr. SGTS
The marvelous 1941 film called “Sergeant York” stars Gary Cooper playing the WWI hero Alvin York. York was the most decorated American soldier in the First World War, and his story helped make the movie about his life the highest grossing film of 1941. For his heroism, York was not only awarded the Medal of Honor by the United States, but also the French Légion d’honneur (the highest decoration in France) and the Italian Croce di Guerra.

62. One of the Poor Clares NUN
Clare of Assisi was one of the first followers of Saint Francis of Assisi. Clare was the founder of the Order of Poor Ladies. The order still exists today and is now known as the Poor Clares in her honor.