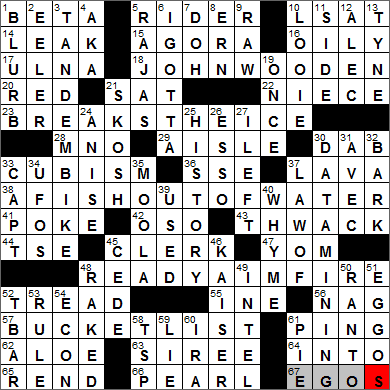 18A. Longtime UCLA coach known as the “Wizard of Westwood” JOHN WOODEN (from “wooden bucket”)
23A. Cracks a little joke to ease tension, say BREAKS THE ICE (from “ice bucket”)
38A. One no longer in his comfort zone A FISH OUT OF WATER (from “water bucket”)
48A. Command sequence before shooting READY AIM FIRE (from “fire bucket”)
57A. Once-in-a-lifetime agenda, or an apt description of the ends of 18-, 23-, 38- and 48-Across BUCKET LIST

Today’s Wiki-est, Amazonian Googlies
Across
1. Phi __ Kappa BETA
Phi Beta Kappa was the first collegiate Greek fraternity in the US, founded in 1776 at the College of William and Mary. The initials Phi Beta Kappa stand for “philosophia biou kybernētēs”, which translates into “philosophy is the guide of life”. The symbol of the Phi Beta Kappa Society is a golden key.

10. Future atty.’s exam LSAT
The Law School Admission Test (LSAT) has been around since 1948.

15. Greek marketplace AGORA
In early Greece the “agora” was a place of assembly. Often the assemblies held there were quite formal, perhaps for the reading of a proclamation. Later in Greek history, things became less formal as the agora evolved into a market place. Our contemporary word “agoraphobia” comes from these agorae, in the sense that an agoraphobe has a fear of open spaces, a fear of “public meeting places”.

18. Longtime UCLA coach known as the “Wizard of Westwood” JOHN WOODEN (from “wooden bucket”)
John Wooden was a remarkably successful basketball coach, winning 10 NCAA championships with UCLA including a an unprecedented “seven-in-a-row”.

20. Caught __-handed RED
“To be caught red-handed” means to be caught in the act. The expression originated in Scotland and dates back at least to the 1400s. The red in question is blood, as in being caught with blood on one’s hands after perhaps committing a murder or an act of poaching.

33. Picasso’s movement CUBISM
In the art movement known as Cubism, objects which are the subject of a painting are broken up and reassembled in an abstract form. The pioneers of the Cubist movement were Pablo Picasso and Georges Braque.

44. Mao __-tung TSE
Mao Zedong was born on December 16, 1893 in the Hunan Province of China. As Mao was the son of a peasant farmer, his prospects for education were limited. Indeed he left school at age 13 to work on the family farm but did eventually get to secondary school in Changsha, the provincial capital. In the years following, Mao continued his education in Beijing and actually turned down an opportunity to study in France.

47. __ Kippur YOM
Yom Kippur is also known as the Day of Atonement.

61. Half of table tennis? PING
Ping-pong is called table tennis in the UK, where the sport originated in the 1880s. Table tennis started as an after-dinner activity among the elite, and was called “wiff-waff”. To play the game, books were stacked in the center of a table as a “net”, two more books served as “”rackets” and the ball used was actually a golf ball. The game evolved over time with the rackets being upgraded to the lids of cigar boxes and the ball becoming a champagne cork (how snooty is that?). Eventually the game was produced commercially, and the sound of the ball hitting the racket was deemed to be a “ping” and a “pong”, giving the sport its alternative name.

62. Burn balm ALOE
Aloe vera has a number of alternate names that are descriptive of its efficacy as a medicine. These include the First Aid plant, Wand of Heaven, Silent Healer and Miracle Plant.

66. Oyster bead PEARL
Pearls form in oysters because of a reaction that is similar to an immune system response in higher animals. The pearl is formed as the oysters lays down successive layers of calcium carbonate around some microscopic foreign body that has penetrated the shell.

67. Self-perceptions EGOS
Sigmund Freud created a structural model of the human psyche, breaking it into three parts: the id, the ego, and the super-ego. The id is that part of the psyche containing the basic instinctual drives. The ego seeks to please the id by causing realistic behavior that benefits the individual. The super-ego almost has a parental role, contradicting the id by introducing critical thinking and morals to behavioral choices.

Down
7. Play-__: kids’ clay DOH
Back in the 1930s, a manufacturer in Cincinnati produced a doughy compound that was used to clean wallpaper. Twenty years later, school-kids started using the cleaning material as a modelling compound, so the manufacturer reworked the formula, and sold it to local schools. It was given the name Play-Doh.

8. Marine eagle ERN
The ern (also erne) is also called the white-tailed eagle, and the sea-eagle.

10. Sarge’s superior LOOIE
A lieutenant (looie) is higher in rank that a sergeant (sarge).

12. Guinness of “Star Wars” ALEC
Sir Alec Guinness played many great roles over a long and distinguished career, but nowadays is best remembered for playing the original Obi-Wan Kenobi in “Star Wars”.

“The Raven” is a narrative poem by Edgar Allen Poe that tells of a student who has lost the love of his life, Lenore. A raven enters the student’s bedchamber and perches on a bust of Pallas. The raven can talk, to the student’s surprise, but says nothing but the word “nevermore” (“quoth the raven, ‘Nevermore’”). As the student questions all aspects of his life, the raven taunts him with the same comment, “nevermore”. Finally the student decides that his soul is trapped beneath the raven’s shadow and shall be lifted “nevermore” …

21. Wee bit SKOSH
“Skosh” is a slang term meaning “a little bit”, originally military slang that came out of the Korean War. “Skosh” derives from the Japanese word “sukoshi” which translates as “few, little, some”.

24. Ouzo flavoring ANISE
Ouzo is an aperitif from Greece that is colorless and flavored with anise. Ouzo is similar to pastis from France and also has a flavor like sambuca from Italy.

26. Bygone gas station ESSO
The brand name Esso has its roots in the old Standard Oil company as it uses the initial letters of “Standard” and “Oil” (ESS-O). The Esso brand was replaced by Exxon in the US, but ESSO is still used in many other countries.

27. “__ my heart in …” I LEFT
“I Left My Heart in San Francisco” is singer Tony Bennett’s signature song. Bennett released it as a B-side in 1962. The song was written in 1953 by two amateur writers in New York City who had moved there and were homesick for their native San Francisco.

30. Pattern-seeking information analysis DATA MINING
The process of data mining is used to extract information from a database and present it in a form that facilitates further use.

33. Ahab or America: Abbr. CAPT
Captain Ahab is the obsessed and far from friendly Captain of the Pequod in Herman Melville’s “Moby Dick”.

Captain America is a fictional superhero in comics published by Marvel Comics. He is the alter ego of a weak man called Steve Rogers who was given an experimental serum by the US Government during WWII.

34. Space saucers, briefly UFOS
In 1952, the USAF revived its studies of reported sightings of unidentified flying objects (UFOs) in a program called Project Blue Book. Project Blue Book ran from 1952 until it was shut down in 1969 with the conclusion that there was no threat to national security and that there were no sightings that could not be explained within the bounds of modern scientific knowledge.

37. __ diminishing returns LAW OF
The law of diminishing returns is an economic principle. The idea behind the law is that after a certain point in time, the return of investment in a process gets lower and lower. In other words, trying to get more and more out of a process eventually becomes more costly over time.

46. Old German leader KAISER
“Kaiser” is the German word for “emperor”. The term is usually applied to the Emperors of the German Empire or Deutsches Reich that started with Kaiser Wilhelm I in 1871 and ended with the abdication of Kaiser Wilhelm II after the Empire’s defeat in WWI.

49. Chip-making giant INTEL
Intel is the world’s largest manufacturer of semiconductor chips. The company was founded in 1968, and the name “Intel” is a derived from the term “int(egrated) el(ectronics)”.

51. Toaster waffles EGGOS
Eggo is the brand name of a line of frozen waffles made by Kellogg’s. When they were introduced in the 1930s, the name “Eggo” was chosen to promote the “egginess” of the batter. “Eggo” replaced the original name chosen, which was “Froffles”, created by melding “frozen” and “waffles”.

52. Skier’s transport T-BAR
A T-bar is a type of ski lift in which the skiers are pulled up the hill in pairs, with each pair standing (not sitting!) either side of T-shaped metal bar. The bar is placed behind the thighs, pulling along the skiers as they remain standing on their skis (hopefully!). There’s also a J-bar, a similar device, but with each J-shaped bar used by one skier at a time.

60. Keogh plan relative: Abbr. IRA
Keogh plans are retirement plans used by self-employed individuals and small businesses. The plans are named for Democratic member of the US House Eugene James Keogh who sponsored the bill that introduced such plans.