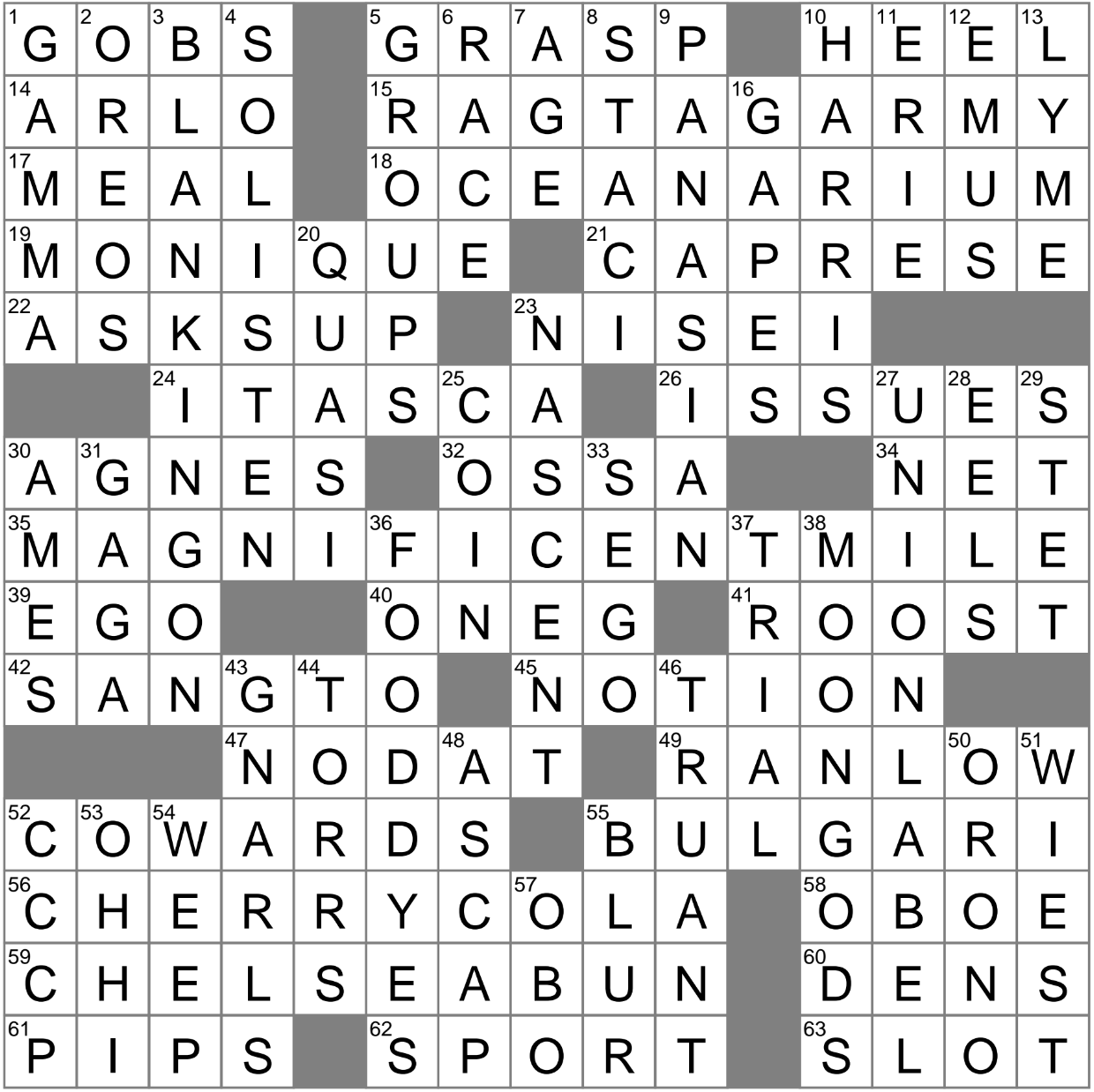 Singer and poet Arlo Parks released the 2020 song “Black Dog” just a few weeks before she became an ambassador for a British mental health charity. The song deals with mental health, and the title “Black Dog” is a term that Winston Churchill used for “depression”.

“Ragtag and bobtail” is a colorful phrase that’s used to describe the lowest classes, or the rabble. A “bobtail” is a horse that has had its tail cut short, a word that goes back as least as far as Shakespeare as he used it in “King Lear”. A “tag” is a piece of cloth that is torn and hanging, which was readily combined with “rag” in the original phrase “tag, rag and bobtail”. This idiom, perhaps originally quoted from Samuel Pepys in his diary in 1659, referred to the lower classes as “tag, rag and bobtail, dancing, singing and drinking”. The phrase evolved, giving us our contemporary word “ragtag” meaning ragged and unkempt.

Something described as motley is mottled, marked with different-colored spots. The term probably comes from the Old English word “mot” meaning “speck”. We can use the term “motley” figuratively to mean “diverse, heterogeneous”.

The S.E.A Aquarium in Singapore’s Marine Life Park was the world’s largest aquarium (by volume of water) when it opened in 2012. It contains 12 million US gallons of water, and is home to over 100,000 marine animals.

“Mo’Nique” is the stage name of the comedian and actress Monique Angela Hicks. Mo’Nique is best known these days for her Oscar-winning performance in the 2009 movie “Precious”.

“Precious” is a 2009 big screen adaptation of the 1996 novel “Push” written by Sapphire. It certainly has been very successful, helped by winning numerous awards at its opening in various film festivals including Sundance and Cannes. The film also benefited from promotional assistance from Oprah Winfrey and Tyler Perry, two of the co-producers. Included in the cast is Mariah Carey who plays the social worker working with “Precious”, the title character.

21 Insalata whose key ingredients happen to be the colors of the Italian flag : CAPRESE

A Caprese salad (“insalata caprese” in Italian) is a relatively simple, but delicious, salad comprising sliced mozzarella and tomatoes, with sweet basil and seasoned with salt and olive oil. It is thought the dish originated on the island of Capri, hence the name “Caprese”. I am a huge fan …

There are some very specific terms used to describe the children born to Japanese immigrants in their new country. The immigrants themselves are known as “Issei”. “Nisei” are second generation Japanese, “Sansei” the third generation (grandchildren of the immigrant), and “Yonsei” are fourth generation.

24 Lake that feeds the Mississippi : ITASCA

Agnes de Mille was a dancer and choreographer from New York City. She was the niece of famous director Cecil B. DeMille, and the daughter of William C. deMille who was also a Hollywood director. Agnes turned to dance after she was told that she was “not pretty enough” to pursue her first love, which was acting …

The Barclays Center is an arena in Brooklyn, New York that is home to the Brooklyn Nets of the NBA, and to the New York Islanders of the NHL. Barclays ended up paying over $200 million for the naming rights, even though the London-based banking group has no retail banks or ATMs in the US.

35 Stretch from the Loop to the Gold Coast : MAGNIFICENT MILE

Chicago’s Michigan Avenue is home to many of the city’s landmarks, including the Chicago Water Tower, the Art Institute of Chicago, Millenium Park and the Magnificent Mile shopping district.

42 Courted with love notes? : SANG TO

To court someone is to woo them, to offer homage. One might do something similar at a royal court, hence the use of the term.

Chelsea buns look like cinnamon rolls with currants incorporated. They were first produced in the 1700s in a bakery called the Bun House in the Chelsea district of London, hence the name.

The spots on dice are called pips.

Gamma radiation was discovered by the French chemist Paul Villard, as he studied radiation coming from the chemical element radium. This radiation was called “gamma”, the third letter in the Greek alphabet, as alpha and beta particles had already been identified.

“My Two Dads” is a sitcom that aired at the end of the 1980s. It’s about two men who are awarded joint custody of a teenage girl. The dads are played by Paul Reiser and Greg Evigan, and the daughter by Staci Keanan. Never saw it …

Kamala Harris was a US Senator for California starting in 2017, after serving for six years as the Attorney General of California. In early 2019, Harris announced her run for the Democratic nomination for US president in the 2020 election. Although she dropped out of the race, she was chosen by eventual nominee Joe Biden as his vice-presidential running mate. When the Biden-Harris ticket won the election, Harris became the highest-ranking female politician in the history of the US.

Old Lyme is a town in Connecticut that is named for the English town of Lyme Regis. The towns of Old Lyme and its neighbor Lyme gave their name to Lyme disease, as a number of cases of the disease were identified there in 1975.

“Quasi” is a Latin word meaning “as if, as though”. We use the term in English to mean “having a likeness to something”.

The sego lily is the state flower of Utah. It is a perennial plant found throughout the Western United States.

Chandra is a moon god in the Hindu tradition. He rides his chariot across the night sky, pulled by an antelope and ten white horses.

Thoth was an ancient Egyptian god who was depicted as a man with the head of either a baboon or an ibis. He was the god of many things, including wisdom, writing, magic and the dead.

Gnarls Barkley is a duo made up of instrumentalist Danger Mouse (aka Brian Burton) and rapper Cee-Lo Green (aka Thomas Calloway). The name “Gnarls Barkley” is a melding of the individual names Prince Gnarls and Bob Gnarley. These names are parodies of Prince Charles and Bob Marley.

44 Pressure units named for the inventor of the barometer : TORRS

A torr is a unit of measure for pressure chosen to be equal to the fluid pressure of a millimeter of mercury. However, when one is talking specifically about blood pressure, we usually talk about “millimeters of mercury”, and not torr.

Dianne Wiest is an actress from Kansas City, Missouri. Wiest has won two Best Supporting Actress Academy Awards, for “Hannah and Her Sisters” in 1987 and for “Bullets over Broadway” in 1995. In both movies, she was directed by Woody Allen.

“Hannah and Her Sisters” is a 1986 comedy-drama film that was written and directed by Woody Allen. Hannah is played by Mia Farrow, and Hannah’s two sisters are played by Barbara Hershey and Dianne Wiest.