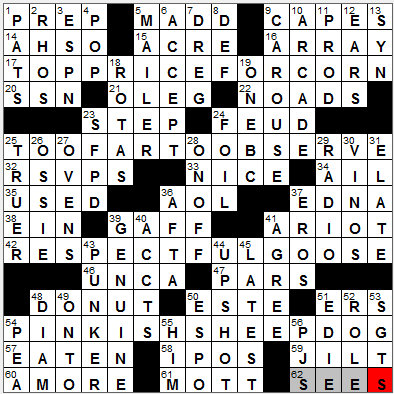 CROSSWORD SETTER: Marti DuGuay-Carpenter
THEME: Sounds Like the Clue … each of the theme answers comes from a homonym of the clue:

17A. Buccaneer? TOP PRICE FOR CORN (Buck an ear?)
25A. Pasteurize? TOO FAR TO OBSERVE (Past your eyes?)
42A. Propaganda? RESPECTFUL GOOSE (Proper gander?)
54A. Melancholy? PINKISH SHEEPDOG (Melon collie?)

Today’s Wiki-est, Amazonian Googlies
Across
1. Emulate a sous chef PREP
The “Sous-Chef de Cuisine” is the “under chef of the kitchen”, the second-in-command.

14. Facetious “I see” AHSO
The slang term “ahso” is used in American English to mean “I see”. The term derives from the Japanese expression “Ah so desu ka” meaning “Oh, that’s how it is”.

17. Buccaneer? TOP PRICE FOR CORN (Buck an ear?)
Buccaneers were pirates who worked the Caribbean in the 1800s, mainly attacking Spanish vessels. The original buccaneer was a French hunter living on Hispaniola (now Haiti and the Dominican Republic). These hunters used a local design of frame called a “buccan” as a smokehouse for meat, and so picked up the name “buccaneer”. In the first half of the 17th century, many of the buccaneers were driven off the island of Hispaniola by the Spanish and so they turned to the sea, making their living by pirating Spanish shipping.

20. IRS info SSN
The main purpose of a Social Security Number (SSN) is to track individuals for the purposes of taxation, although given its ubiquitous use, it is looking more and more like an “identity number” to me. The social security number system was introduced in 1936. Prior to 1986, an SSN was required only for persons with substantial income so many children under 14 had no number assigned. For some years the IRS had a concern that a lot of people were claiming children on their tax returns who did not actually exist. So, from 1986 onward, it is a requirement to get an SSN for any dependents over the ago of 5. Sure enough, in 1987 seven million dependents “disappeared”.

21. Jackie’s designer OLEG
Oleg Cassini, the French-born American fashion designer, had two big names particularly associated with his designs. In the sixties he produced the state wardrobe for First Lady Jacqueline Kennedy, and he was also the exclusive designer for Hollywood’s Gene Tierney, who was Cassini’s second wife.

24. Vendetta FEUD
“Vendetta” is the Italian word for a blood feud, and is especially associated with the island of Corsica.

25. Pasteurize? TOO FAR TO OBSERVE (Past your eyes?)
Unlike sterilization, pasteurization does not kill off all microbes, but instead reduces their number so that a food is unlikely to cause disease or to spoil. Pasteurization involves heating a food to a defined temperature for a defined time and then immediately cooling it. The modern process was of course created by the French chemist Louis Pasteur, after whom the technique is named. Pasteur’s original aim was to prevent wine and beer from going sour.

One type of enclosure (ENC) in a letter might be a self-addressed stamped envelope (SASE).

37. “So Big” author Ferber EDNA
Edna Ferber won the Pulitzer for her novel “So Big”, which was made into a film a few times, most famously in 1953 starring Jane Wyman.

39. Fishing hook GAFF
A gaff is that dangerous-looking metal hook on the end of a pole that fishermen use to drag large fish into their boats.

42. Propaganda? RESPECTFUL GOOSE (Proper gander?)
In 1622, Pope Gregory XV established a committee of cardinals charged with “propagating the faith”, with responsibility for missions aimed at growing the Roman Catholic Church. The committee was called “Congregation de Propaganda Fide”, using the Latin word “propaganda”, the feminine gerund of “propagare” meaning “to propagate”. In the 18th century, the “propaganda” from the committee’s name started being used to describe dissemination of a doctrine in general. During WWII, the term developed a negative connotation, which exists to this day.

46. Donald, to Dewey UNCA
Donald Duck’s nephews are identical triplets called Huey, Dewey and Louie, and they first appeared on the screen in 1938. Once in awhile due to errors in production, a fourth duck can be seen in the background. This little “mistake” is affectionately called “Phooey Duck” by folks in the industry.

47. Masters statistics PARS
Golf’s Masters Tournament is the first of the four major championships in the annual calendar, taking place in the first week of April each year. It is played at Augusta National Golf Club in Georgia and has a number of traditions. One is that the winner is awarded the famous “green jacket”, but he only gets to keep it for a year and must return it to the club after twelve months.

58. Wall St. debuts IPOS
An Initial Public Offering (IPO) is the very first offer of stock for sale by a company on the open market. In other words, an IPO marks the first time that a company is traded on a public exchange. Companies have an IPO to raise capital to expand (usually).

59. Reject, in a way JILT
To “jilt” someone with whom you have a relationship is to drop them suddenly or callously. “Jilt” is an obsolete noun that used to mean “harlot” or “loose woman”.

60. It’s “when the moon hits your eye like a big pizza pie” AMORE
“That’s Amore” is a pop standard written by Harry Warren and Jack Brooks in 1952. It became the signature song for Dean Martin after he sang it (with some help from Jerry Lewis) in the 1953 comedy “The Caddy”.

61. Suffragist Lucretia MOTT
Lucretia Coffin Mott (what a name!) was an American Quaker, and an advocate for women’s rights. Mott has been called the first American “feminist”. Her first job was teaching in the Quaker school in which she was educated. There she learned that her salary was to be one third of that paid to the males with the same job (she married one of the male teachers!). That injustice initiated her interest in women’s rights.

Down
1. Tom Brady’s team, to fans PATS
Tom Brady plays quarterback for the New England Patriots. Brady is from San Mateo, California, which isn’t very far from here. Brady dated actress Bridget Moynahan for a couple of years, and the pair have a child together.

2. Frat letters RHOS
Rho is the Greek letter that looks just like our Roman letter “p”.

3. Place to watch the 1-Down ESPN
ESPN is the Entertainment Sports Programming Network, a cable network that broadcasts sports programming 24 hours a day. ESPN was launched back in 1979.

5. “Marilyn: A Biography” author MAILER
Norman Mailer was a writer from Long Branch, New Jersey. Mailer’s work was much acclaimed and he won two Pulitzer Prizes and one National Book Award. One of his most famous novels is “The Naked and the Dead” published in 1948, a story based on Mailer’s experiences in the Philippines with the 112th Cavalry Regiment during WWII.

“Marilyn: A Biography” is a 1973 book made up of glamor photographs along with a text provided by Norman Mailer. The book created quite a stir when it was first published, as the final chapter states that Monroe was killed by agents of the FBI and CIA in retaliation for Monroe’s alleged affair with Bobby Kennedy.

7. Barrel-bottom bit DREG
The dregs in wine, the sediment that settles during fermentation (and sometimes in the bottle), is also called “lees”.

9. Party hearty CAROUSE
I would have thought the correct wording for the clue would be “Party heartily”, using the adverb, but maybe that’s just me …

10. Skee-Ball spot ARCADE
Skee Ball is that arcade game where you roll balls up a ramp trying to “bounce” it into rings for varying numbers of points. The game was first introduced in Philadelphia, in 1909.

19. Year in Augustus’ reign ONE BC
Gaius Octavius Thurinus (often called Octavian) was the adopted son of Gaius Julius Caesar. After Julius Caesar was assassinated, Octavian came to power in Rome and teamed up with Mark Antony and Marcus Aemilius Lepidus in what was called the Second Triumvirate. When the triumvirate fell apart, especially after Antony’s defeat at Actium, Octavian became more powerful within the Roman Republic. Several years later he wrested sufficient power from the Roman Senate to end the Republic and begin the Roman Empire. As the first Emperor of Rome, Octavian was given the name Caesar Augustus.

23. “Monk” org. SFPD
The San Francisco Police Department (SFPD) is the 11th largest police department in the country. The SFPD dates back to the days of the Gold Rush, being founded in 1849 as a force of 35 officers. SFPD has featured a lot in movies and on television. The most famous films are probably “Bullitt”, the “Dirty Harry” series and “48 Hrs.” On television there was “Ironside”, “The Streets of San Francisco” and now “Monk”.

“Do the Right Thing” is a Spike Lee movie, released in 1989. Much of the action in the film is centered on a local pizzeria called “Sal’s” owned by Italian-American Salvatore Frangione (played by Danny Aiello).

29. A ham might be on one RADIO
Amateur radio operators were originally called ham operators by professional telegraph operators, and the term was intended to be insulting. It came from the similar term “ham actor”, describing a person who was less than effective on the stage. But amateur operators eventually embraced the moniker and so it stuck.

30. Chiantis, e.g. VINOS
Chianti is a red wine from Tuscany in Italy. Historically, Chianti was stored in a characteristically bulbous bottle wrapped in a straw basket, although these days the pragmatists have won the day and regular wine bottles tend to be used.

43. Sex Pistols fan, e.g. PUNKER
The Sex Pistols were the group that introduced the punk movement to the UK, back in 1975. The Sex Pistols were very vocal in their opposition to the social norms of the time. One of their most famous singles is “God Save the Queen”, from 1977. The lyrics were considered so offensive that workers at the plant where the record was being pressed came out on strike rather than be associated with the song. When it was eventually released, the BBC went as far as banning the record, not something that happens very often.

54. Space cadet’s brain size? PEA
The expression “space cadet” is used to describe someone who is eccentric and disconnected with reality. It may even imply that the person is a user of hallucinogens. The phrase has been around since the sixties, and may be derived from the science fiction TV show “Tom Corbett, Space Cadet” which aired in the fifties.

56. Under-cover duds? PJS
Our word “pajamas” comes to us from the Indian subcontinent, where “pai jamahs” were loose fitting pants tied at the waist and worn at night by locals and ultimately by the Europeans living there. And “pajamas” is another of those words that I had to learn to spell differently when I came to America. In the British Isles the spelling is “pyjamas”.