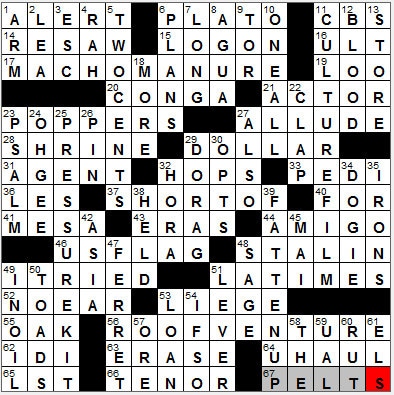 CROSSWORD SETTER: Gail Grabowski
THEME: “URE” Added … each of the theme answers is a well known term with the suffix “-ure” added somewhere:

Today’s Wiki-est, Amazonian Googlies
Across
6. Student of Socrates PLATO
Plato was a Greek philosopher and mathematician. He was a student of the equally famous and respected Socrates, and Plato in turn was the teacher and mentor of the celebrated Aristotle.

11. “The Mentalist” network CBS
“The Mentalist” is a police drama that has been airing on CBS since 2008. It’s all about a former psychic who now works as a consultant to the police. I have never watched it though …

17. Stallone’s garden supply? MACHO MAN(URE)
If ever there was a movie that defines a career breakthrough for an actor, it would have to be “Rocky” for Sylvester Stallone. Stallone was a struggling actor in 1975 when a Muhammad Ali fight inspired Stallone to write a screenplay for a boxing movie, which he did in just three days. His efforts to sell the script went well but for the fact that the interested studios wanted a big name for the lead role, and Stallone was determined to be the star himself. Stallone persevered and “Rocky” was eventually made with him playing the lead, and the movie won three Oscars. “Sly” Stallone had arrived …

19. Halifax head LOO
When I was growing up in Ireland, a “bathroom” was a room that had a bath and no toilet. The separate room with the commode was called “the toilet” or sometimes the W.C. (the water closet). Apparently the term closet was used because in the 1800s when homeowners started installing toilets indoors they often displaced clothes and linens in a “closet”, as a closet was the right size to take the commode. It has been suggested that the British term “loo” comes from Waterloo (water-closet … water-loo), but no one seems to know for sure. Another suggestion is that the term comes from the card game of “lanterloo” in which the pot was called the loo!

Halifax is a town in West Yorkshire in the North of England.

20. Lively dance CONGA
The conga line is a dance that originated as a Cuban carnival march. It became popular in the US starting in the thirties. The dance is apparently named after the Congo region of Africa, and it was originated by slaves who were brought from there to Cuba.

21. Cage, for one ACTOR
Nic Cage was born Nicolas Coppola. Cage is the nephew of director Francis Ford Coppola and actress Talia Shire, both of whom are his father’s siblings.

23. Movie theater appliances POPPERS
Those would be popcorn poppers, or I suppose more correctly “corn poppers that make popcorn” …

29. Buck DOLLAR
“Buck” and “clam” are both slang terms for “a dollar”. The term “buck” has been around at least since 1856, and is thought to derive from the tradition of using buckskin as a unit of trade with Native Americans during the frontier days. It has been suggested that “clam” has a similar derivation, a throwback to the supposed use of clams as units of currency in ancient cultures.

41. Cubs’ spring training city MESA
The city of Mesa, Arizona is in effect a suburb of Phoenix.

44. Cádiz cohort AMIGO
Cádiz is a port city in southwestern Spain, in the autonomous community of Andalusia. Cádiz is a remarkable city geographically, in that it sits on a thin spit of land that juts out into the sea.

48. Allied leader STALIN
Joseph Stalin was Soviet Premier from 1941 to 1953. Stalin’s real name was Ioseb Besarionis dze Jughashvili, but not long after the Bolshevik Revolution of 1903 he adopted the name “Stalin”, which is the Russian word for “steel”.

53. Feudal lord LIEGE
A liege was a feudal lord, one to whom service or allegiance was owed under feudal law. “Liege” was also the term used for one who owed allegiance or service to the lord. Very confusing …

62. First name in dictators IDI
Idi Amin received most of his military training in the British armed forces, eventually achieving the highest rank possible for a Black African in the British Colonial Army in 1959, that of Warrant Officer. On his return to Uganda Amin joined his country’s military and quickly rose to the rank of Deputy Commander of the Army. During that time he was quite the athlete. He was a noted rugby player and swimmer, and for nine years held the Ugandan national light-heavyweight boxing title. By the early seventies, Amin was commander of all the armed forces of Uganda and in 1971 seized power in a military coup, displacing the country’s president Milton Obote. There followed seven years of brutal rule by Amin during which it is estimated that between 100,000 and 500,000 people were murdered. Amin was ousted from power in 1979 after a war with Tanzania, and fled to Libya where he stayed for a year. He then moved to Saudi Arabia, where he was financially supported by the Saudi Royal Family for the remainder of his life. Amin died in 2003.

64. Ryder rival U-HAUL
U-Haul was started by married couple Leonard Shoen and Anna Mary Carty in Ridgefield, Washington in 1945. The Shoens used $5,000 of seed money to build trailers in their garage, and then cleverly recruited gas station owners as franchisees with whom they would split the rental revenue. There are now about 15,000 U-Hail dealers across the country.

65. WWII carrier LST
LST stands for Landing Ship, Tank. LSTs were the large vessels used mainly in WWII that had doors at either ends through which tanks and other vehicles could roll off and onto beaches. The design concept persists to this day in the huge fleet of commercial roll-on/roll-off car ferries, all inspired by the LST.

Down
8. Río contents AGUA
In Spanish, there is water (agua) in the river (río ).

9. A.L. East team, on scoreboards TOR
The Toronto Blue Jays baseball franchise was founded in 1977 and is the only team outside the US to have won a World Series, doing so in 1992 and 1993. And since the Montreal Expos relocated to Washington, the Blue Jays are the only Major League Baseball team headquartered outside of the US.

22. Storm harbinger CLAP
A clap of thunder might indicate there’s a storm on the way.

23. Old Testament poem PSALM
Our word “psalm” comes to us via Latin from the Greek “psalmos” meaning “song sung to a harp”.

29. Dome cover DO-RAG
Hip-hoppers might wear do-rags today, but they have been around for centuries. If you recall the famous image of Rosie the Riveter, she was wearing a do-rag. The etymology is pretty transparent, a piece of cloth (rag) to hold a hairstyle (do) in place.

32. Hand-holding group dance HORA
The hora (also “horah”) is a circle dance that originated in the Balkans. The hora was brought to Israel by Romanian settlers, and is often performed to traditional Israeli folk songs. The dance is a regular sight at Jewish weddings.

34. Oater orphan DOGIE
“Dogie” is cowboy slang for a motherless calf in a herd.

35. Mashie and niblick IRONS
Most of the irons in a golf bag had non-numerical names in days gone by:

42. Kolkata’s locale ASIA
Kolkata (formerly Calcutta) is the capital of West Bengal, India. Kolkata grew up around a fort that the British built in the area in 1712. Prior to the arrival of the British, there were three villages at the site, one named Kalikata. Kalikata gave its name to the city that eventually developed. This was anglicized to “Calcutta” which became the official name for centuries, until it was changed to Kolkata in 2001.

45. Avril follower MAI
In French, the month of April (avril) comes before May (mai). Note that the French don’t capitalize the names of months as we do in English.

48. Saltimbocca herb SAGE
Saltimbocca is a dish from southern Europe made of veal topped with prosciutto and sage, and then marinated in perhaps wine. The name “saltimbocca” is Italian for “jump in the mouth”.

51. Subject for Archimedes LEVER
Archimedes of Syracuse was a man of many talents: a mathematician, physicist, inventor and astronomer. Archimedes’ name is often associated with hydrostatics and with the lever. He is also famous for reputedly uttering the word “Eureka”.

Eureka translates from Greek as “I have found it”. The word is usually associated with Archimedes, uttered as he stepped into his bath one day. His discovery was that the volume of water that was displaced was equal to that of the object (presumably his foot) that had been submerged. He used this fact to determine the volume of a crown, something he needed in order to determine if it was made of pure gold or was a forgery.

59. 2002 Chapter 11-filing flier UAL
United Airlines used the tagline “Fly the Friendly Skies” in its marketing materials from 1965 to 1996. It was then replaced with “It’s time to fly”. United chose George Gershwin’s “Rhapsody in Blue” as the company’s theme music in 1976, and paid the Gershwin estate a fee of $500,000 for the privilege.

61. 2002 British Open champ ELS
Ernie Els is a South African golfer. Els a big guy but he has an easy fluid golf swing that has earned him the nickname “The Big Easy”. He has a child who suffers from autism and so Els has been very effective in raising money for charities that focus on the condition.