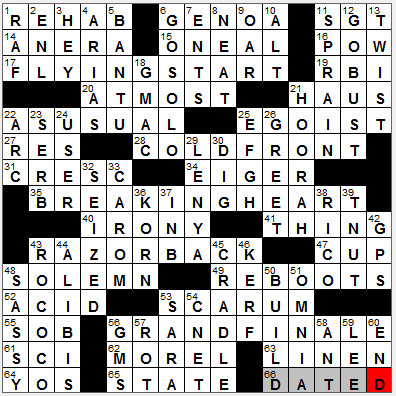 Today’s Wiki-est, Amazonian Googlies
Across
6. Ligurian capital GENOA
Genoa is a seaport in the very north of Italy, in the region known as Liguria. One of Genoa’s most famous sons was Christopher Columbus.

11. Pepper, e.g.: Abbr. SGT
Sgt. Pepper’s Lonely Heart Club Band was the alter-ego of the Beatles and was the title of a famous studio album released in 1967.

34. Swiss peak EIGER
The Eiger is a mountain in the Bernese Alps in Switzerland. It is a noted peak for mountain climbing, with its treacherous north face being the most famous approach to the summit. Over sixty climbers have died since 1935 on that north face.

47. Dixie product CUP
Dixie Cup is a brand of disposable papers cups. The first such cups were introduced to promote hygiene at shared water fountains, as prior to disposable cups, glasses or dippers were shared by people taking a drink. As such, the Dixie Cup was introduced in 1907 as the “Health Kup”. The name was changed in 1919 to Dixie Cup, after a line of dolls (presumably as the cups were relatively small).

52. __ rock ACID
Acid rock is a musical genre, a subset of psychedelic rock. The term comes from the influence of the drug LSD (acid) on some compositions in the early days.

61. Navig., for one SCI
Navigation is a science.

62. Gourmet mushroom MOREL
The morel is that genus of mushroom with the honeycomb-like structure on the cap. They’re highly prized, especially in French cuisine. Morels should never be eaten raw as they are toxic, with the toxins being removed by thorough cooking.

Down
1. Battle of Britain gp. RAF
The Royal Air Force (RAF) is the oldest independent air force in the world (i.e. the first air force to become independent of army or navy forces). The RAF was formed during WWI on 1 April 1918, a composite of two earlier forces, the Royal Flying Corps (part of the Army) and the Royal Naval Air Service. The RAF’s “finest hour” has to be the Battle of Britain when the vastly outnumbered British fighters fought off the might of the Luftwaffe causing Hitler to delay his plan to cross the English Channel. This outcome prompted Winston Churchill to utter these memorable words:

2. Like mil. volunteers ENL
Military volunteers can be in the enlisted ranks, which are ranks below that of a commissioned officer.

5. Language family common in southern Cameroon BANTU
There are hundreds of Bantu languages, mainly spoken in central, east and southern Africa. The most commonly spoken Bantu language is Swahili, with Zulu coming in second.

The Republic of Cameroon is on the west coast of Africa. One of Cameroon’s claims to fame is having a great national soccer team, one that always seems to do well in the FIFA World Cup.

7. Fangorn Forest denizens ENTS
Ents are those tree-like creatures that live in J. R. R. Tolkien’s Middle-earth in his series of books “The Lord of the Rings”. “Ent” is an Old English word for “giant”.

8. How cognac is usually served NEAT
Cognac is the most famous variety of brandy, named after the town of Cognac in the very west of France. To be called cognac, the brandy must be distilled twice in copper pot stills and aged at least two years in very specific French oak barrels. It is the length of this aging that defines the various grades of cognac (and other brandies):

18. Ally Financial Inc., formerly GMAC
GMAC is short for General Motors Acceptance Corporation. General Motors has only a small stake in GMAC now, and indeed the name has been officially changed to Ally Bank. You and me, we are the biggest shareholders in GMAC/Ally today, since the US government gave the bank $12.5 billion to bail it out in 2008-2009.

23. Balkan native SERB
Serbs are an ethnic group native to the Balkans in southeastern Europe. Although Serbs exist as minority groups in many countries in the region, they are the majority ethnic group in Serbia, in Montenegro and in Bosnia and Herzegovina.

29. “The Threepenny Opera” star LENYA
Lotte Lenya was an Austrian singer and actress. She was married to composer Kurt Weill, and was noted for her performances of his works. Late in her career she played Rosa Klebb, one of the main villains in the 1963 Bond movie “From Russia With Love”. Klebb was the character who had the knife that popped out from the toe of her shoe.

“The Threepenny Opera” (“Die Dreigroschenoper”) is a musical written by Bertolt Brecht and Kurt Weill that was first performed in Berlin in 1928. It is an adaptation of “The Beggar’s Opera” written by Englishman John Gay in the 18th century. The most famous song from the show is “Mack the Knife”, which was introduced into the popular music repertoire by Louis Armstrong. Armstrong had a hit with the song in 1956, but it was the Bobby Darin recording of 1959 that came to be known as the definitive, English-language version. I love that song …

33. Pool shot CAROM
A carom is a ricochet, the bouncing of some projectile off a surface. Carom has come to mean the banking of a billiard ball, the bouncing of the ball off the side of the table.

36. Band with the multi-platinum album “Follow the Leader” KORN
Korn is an alternative metal band from Bakersfield, California. The band’s name is derived from a fan suggestion of “Corn”. The suggested name was considered too bland and so was prettied up to Korn, with the letter “r” capitalized and written backwards.

37. Liszt’s “Piano Sonata __ Minor” IN B
Franz Liszt (1811-1886) was a Hungarian composer and a fabulous pianist. Particularly towards the end of his life, Liszt gained a tremendous reputation as a teacher. While he was in his sixties, his teaching jobs caused him to commute regularly between the cities of Rome, Weimar and Budapest. It is quite remarkable that a man of such advanced age, and in the 1870s, could do so much annual travel. It is estimated that Liszt journeyed at least 4,000 miles every year!

38. Psychotic penguin in “Madagascar” RICO
“Madagascar” is an animated film released in 2005. It’s a story about zoo animals who are used to “the easy life” in captivity, getting shipwrecked on the island of Madagascar off the African coast.

39. Letter-shaped fastener T-NUT
A T-nut is so called because it has a t-shape when viewed from the side.

42. Rte. finder GPS
GPS stands for Global Positioning System. The modern GPS system that we use today was built by the US military who received the massive funding needed because of fears during the Cold War of the use of Intercontinental Ballistic Missiles. We civilians, all round the world, owe a lot to President Ronald Reagan because he directed the military to make GPS technology available to the public for the common good. President Reagan was moved to do so after the Soviet Union shot down KAL flight 007 carrying 269 people, just because the plane strayed accidentally into Soviet airspace.

43. Elaborate style ROCOCO
The Rococo style is also known as “Late Baroque”. It is a very floral and playful style, very ornate.

53. Poet Teasdale SARA
Sara Teasdale was a poet from St. Louis, Missouri although she spent much of her adult life in New York City. Examples of Teasdale’s most famous poems are “There Will Come Soft Rains” and “I Shall Not Care”. Teasdale committed suicide in 1933 by taking an overdose of sleeping pills.

54. Site where techs get news C|NET
c|net is an excellent technology website. c|net started out in 1994 as a television network specializing in technology news. In fact the host of “American Idol”, Ryan Seacrest, started off his career as host of a c|net show.

57. Balderdash ROT
“Balderdash” means a senseless jumble of words, and was originally (back before the late 1600s) a jumbled mix of liquids (like maybe beer and wine, or even beer and milk!).

59. Wrangler competitor LEE
The Lee company famous for making jeans was formed in 1889, by one Henry David Lee in Salina, Kansas.

60. Apt puzzle answer, in this case END
This answer is apt today, as it lies right at the “end” of the puzzle.