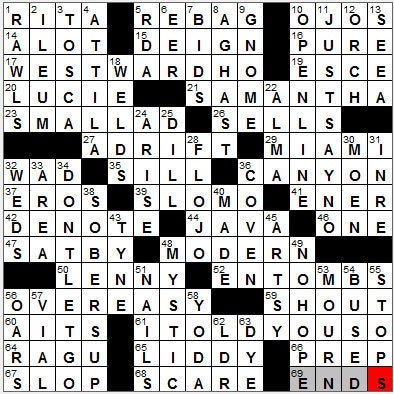 CROSSWORD SETTER: Don Gagliardo & C.C. Burnikel
THEME: Ends with “O” … each of the theme answers is a common phrase that finishes up with a two-letter word ending in “-O”:

14. Oodles A LOT
It’s thought that the term “oodles” comes from “kit and caboodle”.

16. Ivory soap ad word PURE
Ivory soap is one of Proctor & Gambles oldest products, introduced way back in 1879. Ivory soap is noted for its “purity” and also because of its property of floating in water. Despite urban myths to the contrary, the property of floating in water was developed deliberately by a chemist at the time Ivory was being formulated. The soap floats because the ingredients are mixed longer than necessary for homogenization, introducing more air into the product.

19. Suffix with opal -ESCE
An opal is often described as having a milky iridescence, known as “opalescence”.

20. Arnaz of “Here’s Lucy” LUCIE
Lucille Ball was at the height of her success while she was married to Desi Arnaz. The couple met in 1940 and not long afterwards eloped. Lucy had several miscarriages before she gave birth to her first child in 1951, just one month before her fortieth birthday. A year and a half later, while “I Love Lucy” was garnering large audiences, she became pregnant with her second child, a pregnancy that was written into the television show’s script. In fact, the day that Lucy gave birth on the show, was the same day that she gave birth in real life.

21. “Bewitched” witch SAMANTHA
The delightful sitcom “Bewitched” originally ran on ABC from 1964 to 1972. The lead character in the show is Samantha Stephens, played by the lovely Elizabeth Montgomery. Elizabeth was the daughter of Hollywood star Robert Montgomery.

29. Home of Dolphins and Marlins MIAMI
The Miami Dolphins football team was founded in 1966. One of the two original owners was actor and comedian Danny Thomas.

37. Winged deity EROS
As always seems to be the case with Greek gods, Eros and Aphrodite have overlapping spheres of influence. Aphrodite was the goddess of love between a man and a woman, and Eros was the god who stirred the passions of the male.

41. Cabinet dept. concerned with power ENER
The US Department of Energy (DOE) came into being largely as a result of the 1973 oil crisis. The DOE was founded in 1977 by the Carter administration. Not only is the DOE responsible for regulating the production of nuclear power, it is also responsible for the nation’s nuclear weapons.

44. Cup of joe JAVA
It seems that no one really knows why we refer to coffee as “joe”, but we’ve been doing so since early in WWII.

48. One of the M’s in MoMA MODERN
The founding of the Museum of Modern Art (MoMA) in New York City was very much driven by Abby Aldrich Rockefeller, the wife of John D. Rockefeller, son of the oil magnate. Working with two friends, Abby managed to get the museum opened in 1929, just nine days after the Wall Street Crash. The MoMA’s sculpture garden bears the name of Abby Aldrich Rockefeller, and has done so since 1949.

60. River isles AITS
Aits are little islands found in a river. Aits aren’t formed by erosion, but by the deposition of silt over time. As a result, aits often have a long and narrow shape running parallel to the banks as the sediment builds up with the flow of the water. Many of the islands in the River Thames in England have been given the name “Ait”, like Raven’s Ait in Kingston-upon-Thames, and Lot’s Ait in Brentford.

64. Prego rival RAGU
The Ragu brand of pasta sauce is owned by Unilever. The name ” Ragù” is the Italian word for a sauce used to dress pasta, however the spelling is off a little. In Italian the word is “Ragù” with a grave accent over the “u”, but if you look at a jar of the Unilever sauce, it is spelled “Ragú” on the label, with an acute accent. Sometimes I think we just don’t try …

The Prego brand of pasta sauce is owned by the Campbell Soup Company. Prego sauce is actually based on the family recipe of one of the company’s chefs. “Prego” literally means “I pray” in Italian, but it translates in English best as “you’re welcome” when it is used after a “thank you”.

65. Nixon staffer G. Gordon __ LIDDY
G. Gordon Liddy was in the Nixon administration, serving in various positions. In 1971 Liddy was moved into a unit tasked with managing leaks of information from the White House. As the group was working on “leaks”, it was known as the White House “Plumbers” unit. Over time, the Plumbers moved from plugging leaks to actively plotting to embarrass the Democratic opposition during President Nixon’s re-election campaign. Ultimately, Liddy led the group of five men who famously broke into the headquarters of the Democratic National Campaign in the Watergate Complex.

Down
1. “Unmistakably Lou” Grammy winner RAWLS
Lou Rawls was an American soul and blues singer known for his smooth vocal style. With his singing career well on the way, Rawls was asked to sing “The Star Spangled Banner” in 1977 at a Muhammad Ali fight in Madison Square Garden. This performance led to him being asked to sing the anthem many, many times in the coming years with his last performance being at a World Series game in 2005. Rawls passed away in January of the following year.

2. Intestinal section ILEUM
The human ileum is the lowest part of the small intestine, found below the jejumum and above the cecum of the large intestine.

3. Puccini classic TOSCA
Unlike so many operas, “Tosca” was a big hit right from day one, when it was first performed in 1900 at the Teatro Costanzi in Rome. “Tosca” is currently the eighth-most performed opera in America, although I’ve only seen it once myself.

4. Head Hun ATTILA
The Huns were a nomadic people who originated in Eastern Europe in the 4th century. Under the command of Attila the Hun they developed a unified empire that stretched from modern-day Germany across to the steppes of Central Asia. The whole of the Hunnic Empire collapsed within a year of Attila’s death in 453 AD.

6. Always, to Pope E’ER
Alexander Pope was an English poet, famous for his own compositions as well as for a translation of Homer’s works. One of Pope’s most notable poems is “Ode on Solitude” that opens with:

Happy the man, whose wish and care
A few paternal acres bound,
Content to breathe his native air,
In his own ground.

Pope wrote that when he was just twelve years old!

9. Pointy-hatted garden character GNOME
In English folklore, the lovable fairy’s anti-hero is the diminutive gnome, an evil ugly character. Over the centuries, the gnome has become more lovable so we now have garden gnomes and even the Travelocity Gnome …

25. Herb used in borscht DILL
Borscht is a beetroot soup that originated from Ukraine. Borscht can be served both hot and cold.

28. Nickname in Olympics sprinting FLO-JO
The American track and field athlete Florence Griffith-Joyner was also known as Flo-Jo. Flo-Jo’s world records for the 100 and 200 meters were set in 1988, and amazingly they still stand today. Sadly, Flo-Jo was only 38 years old when she died in her sleep in 1998 due to epilepsy.

31. Memo starter IN RE
The term “in re” is Latin and literally translates as “in the matter”, but is used to mean “in regard to” or “in the matter of”.

36. Witches’ assembly COVEN
“Coven” is an old Scottish word meaning simply “gathering”. The first known application of the word to witchcraft came during the trial of a Scotswoman in 1662 accused of being a witch. At that time, “coven” came to mean a group of 13 witches.

54. Cleared tables BUSED
A busboy is a person who assists a waiter, mainly by clearing tables. The verb “to bus” arose in the early 1900s and is probably a reference to the wheeled cart that was used to carry dishes.

58. “Star Wars” philosophizer YODA
Yoda is one of the most beloved characters in the “Star Wars” series of films. Yoda’s voice was provided by the great modern-day puppeteer Frank Oz of “Muppets” fame.