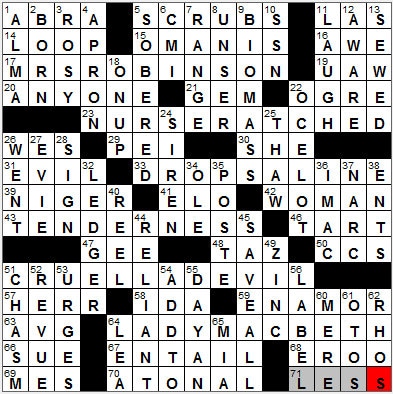 CROSSWORD SETTER: Kurt Mueller
THEME: EVIL WOMAN … Each of the theme answers is an EVIL WOMAN in the world of entertainment or literature:

Today’s Wiki-est, Amazonian Googlies
Across
1. Spell starter ABRA
The incantation “abracadabra” has a long history. It was used as far back as the 2nd century AD in Ancient Rome when the word was prescribed by a physician to be worn on an amulet to help his emperor recover from disease. “Abracadabra” is Aramaic, and roughly translates as “I will create as I speak”.

11. “Viva __ Vegas!” LAS
“Viva Las Vegas” is an Elvis Presley movie released in 1964, considered to be one of his best films. The good reception for the movie was at least in part due to the performance of the female lead, Ann-Margret.

15. Muscat natives OMANIS
Oman lies on the southeast coast of the Arabian Peninsula and is neighbored by the OAE, Saudi Arabia and Yemen. The capital city of Muscat has a strategic location on the Gulf of Oman and has a history of invasion and unrest. Centuries of occupation by the Persians ended in 1507 when the Portuguese took the city in a bloody attack. The Portuguese held Muscat for much of the next one hundred years until finally ousted by local Omani forces in 1648. A Yemeni tribe invaded the area in 1741 and set up a monarchy that has been in place in Oman ever since.

17. 31/42-Across in a 1967 Dustin Hoffman film MRS ROBINSON
When Mike Nichols was making the 1967 film “The Graduate” he apparently became obsessed with the music of Simon and Garfunkel, who were just coming into the limelight. Nichols made a deal with Paul Simon to write three songs that he could use on the soundtrack of his new movie. Simon and Garfunkel were touring constantly around that time, so Nichols had to badger Simon to hold up his end of the bargain. When Nichols was ready to lay down the film’s soundtrack there was only one commissioned song available, so Nichols had to basically beg Paul Simon for anything. Simon mentioned that he was finishing up one new song, but it wasn’t written for the film. It was more a celebration former times, with lyrics about baseball great Joe DiMaggio and former First Lady, Mrs. Roosevelt. Nichols informed Simon that the song was no longer about Mrs. Roosevelt, and it was about Mrs. Robinson …

19. Detroit labor org. UAW
The United Auto Workers (UAW) was founded to represent workers in auto plants in the Detroit area in 1935. Nowadays its membership extends into the aerospace, agriculture and other industries.

22. Shrek, e.g. OGRE
Before “Shrek” was a successful movie franchise and Broadway musical, it was a children’s picture book called “Shrek!” authored and illustrated by William Steig. The title “Shrek!” came from the German/Yiddish word Schreck, meaning “fear” or “terror”.

23. 31/42-Across in a Ken Kesey novel NURSE RATCHED
Nurse Rached was the control-freak of a nurse who ran the ward in the Ken Kesey novel “One Flew Over the Cuckoo’s Nest”. In the 1975 movie of the same name, Rached was played by actress Louise Fletcher. Fletcher won an Oscar for that performance.

26. Director Craven WES
Wes Craven is a very successful film director and writer specializing in movies of the horror genre, which means I don’t watch them! Craven is responsible for “A Nightmare on Elm Street” and the “Scream” films.

29. Shar-__: wrinkly dog PEI
The Shar Pei breed of dog is that one with the wrinkly face and really dark tongue. The breed originated in China, with “Shar Pei” being the British spelling of the Cantonese name.

41. Rock gp. known for its symphonic sound ELO
The Electric Light Orchestra (ELO) is a symphonic rock group from the north of England. The band’s manager was Don Arden, father of Sharon Osbourne (wife of Ozzy).

48. Looney Tunes dynamo, familiarly TAZ
The carnivorous marsupial known as the Tasmanian devil is aptly named, in the sense that the only place the animal is found in the wild is on the island of Tasmania. The “little devils” are about the size of a small dog, and they have the strongest bite for their size of any known mammal.

51. 31/42-Across in a 1961 Disney animated film CRUELLA DE VIL
Cruella de Vil is the villain in the 1956 novel “The Hundred and One Dalmatians” written by Dodie Smith. Most famously perhaps, Cruella was played so ably by Glenn Close in the Disney movie adaption “101 Dalmatians”, released in 1996.

58. Actress Lupino IDA
Actress Ida Lupino was also a successful director, and that was in the days when women weren’t very welcome behind the camera. Lupino had already directed four “woman’s” shorts when she stepped in to direct the 1953 drama “The Hitch-Hiker”, taking over when the original director became ill. “The Hitch-Hiker” was the first film noir movie to be directed by a woman, and somewhat of a breakthrough for women in the industry.

64. 31/42-Across in a Shakespeare tragedy LADY MACBETH
Lady Macbeth is an evil and treacherous woman in William Shakespeare’s “Macbeth”. The most famous line uttered by Lady Macbeth has to be:

Down
1. __ mater ALMA
The literal translation for the Latin phrase “alma mater” is “nourishing mother”. Alma mater was used in Ancient Rome to refer to mother goddesses, and in Medieval Christianity the term was used to refer to the Virgin Mary. Nowadays, one’s alma mater is the school one attended, either high school or college, usually one’s last place of education.

8. Indy great Al UNSER
The Unser family seems to have racing cars in its blood. Al Unser, Sr. won the Indy 500 on four occasions. Al’s brother Jerry was the first of the Unsers to compete at Indianapolis. Al’s other brother Bobby, won the Indy three times. Al’s son, Al Junior, won the Indy twice. Al Junior’s son is also a racing driver who competes at the Indy Speedway.

10. Payroll ID SSN
The main purpose of a Social Security Number (SSN) is to track individuals for the purposes of taxation, although given its ubiquitous use, it is looking more and more like an “identity number” to me. The social security number system was introduced in 1936. Prior to 1986, an SSN was required only for persons with substantial income so many children under 14 had no number assigned. For some years the IRS had a concern that a lot of people were claiming children on their tax returns who did not actually exist. So, from 1986 onward, it is a requirement to get an SSN for any dependents over the ago of 5. Sure enough, in 1987 seven million dependents “disappeared”.

18. “Movin’ __”: “The Jeffersons” theme ON UP
The very popular sitcom called “The Jeffersons” ran from 1975 until it came to an abrupt end in 1985. CBS cancelled the show without even allowing a series finale that “wrapped things up”. In fact the lead actor, Sherman Hemsley, first learned of the show’s cancellation in the newspaper.

22. Spotted wildcat OCELOT
The ocelot is found mainly in South and Central America, although there have been sightings as far north as Arkansas. An ocelot doesn’t look too different from a domestic cat, and some have been kept as pets. Perhaps most famously, Salvador Dali had one that he carried around everywhere with him.

27. Singer/songwriter Sands EVIE
Evie Sands is a singer from Brooklyn, New York. Sands is also a noted songwriter, having penned songs that have been recorded by the likes of Barbra Streisand, Gladys Knight, Karen Carpenter, Linda Ronstadt and Dusty Springfield.

36. 14-year-old Apple IMAC
The iMac is a desktop computer platform from Apple introduced in 1998. One of the main features of the iMac is an “all-in-one” design, with the computer console and monitor integrated.

38. Sinusitis docs ENTS
Sinusitis is an inflammation of the sinuses, usually due to a viral infection. It might be treated by an Ear, Nose and Throat specialist (ENT).

45. Receptacle for preventing waste SAVE-ALL
A “save-all” is a receptacle used in manufacturing for catching waste products for recycling. New to me …

49. Metal in pennies ZINC
The official name of our smallest denomination coin is a “cent”, and our use of the word “penny” is just a colloquialism derived from the British coin of the same name. However, in the UK the plural of penny is “pence”, whereas we have “pennies” in our pockets.

55. Six-Day War leader Moshe DAYAN
Moshe Dayan had a long and distinguished military career (including command of Israeli forces during the 1956 Suez Crisis). Dayan also played a pivotal, and militarily active role as Minister for Defense during the Six-Day War of 1967. He was a very recognizable figure with a black patch over his left eye. Dayan received that injury when he was fighting for the Allies in Vichy French Lebanon during WWII. He was using a pair of binoculars that was hit by an enemy bullet, smashing metal and glass fragments into his eye.

The Six-Day War took place from June 5th to June 10th in 1967, and was fought between Israel and its neighbors Egypt, Jordan and Syria. By the time a ceasefire was signed, Israel had seized huge swaths of land formerly controlled by Arab states, namely the Gaza Strip, the Sinai Peninsula, the West Bank of the Jordan River and the Golan Heights. The overall territory under the control of Israel grew by a factor of three in just six days.

61. Midwest Native Americans OTOS
The Otoe (also Oto) Native American tribe originated in the Great Lakes region as part of the Winnebago or Siouan tribes. The group that would become the Otoe broke away from the Winnebago and migrated southwestwards ending up in the Great Plains. In the plains the Otoe adopted a semi-nomadic lifestyle dependent on the horse, with the American bison becoming central to their diet.

65. Jane Eyre portrayer Wasikowska MIA
Mia Wasikowska is an Australian actress. Wasikowska’s breakthrough role was playing the title character in Tim Burton’s “Alice in Wonderland” in 2010. The only movie I’ve seen her in though is 2011’s “Jane Eyre”, a pretty good adaptation of the Charlotte Brontë classic, I thought …